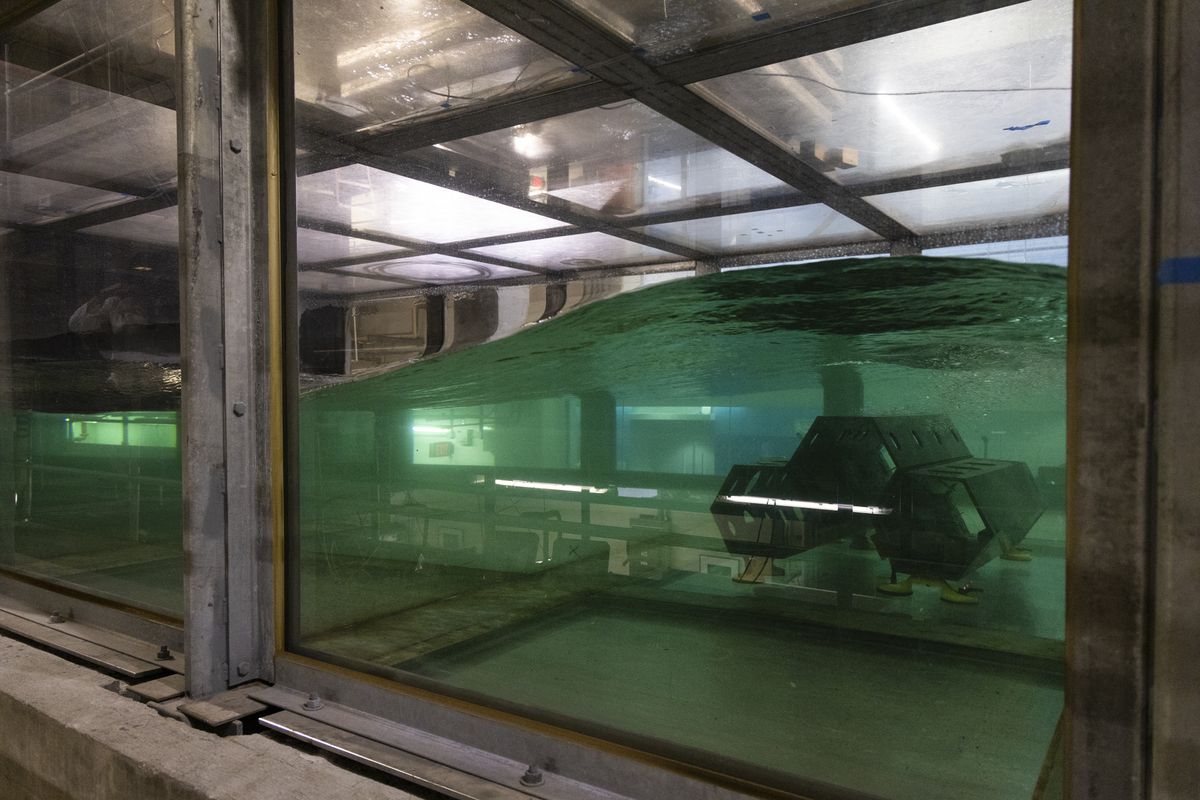 On a sunny afternoon in April, I stood indoors in front of the only machine in the world that can create a Category 5 hurricane in a lab. Housed in a large building at the University of Miami on Virginia Key, it consists of a swimming-pool-sized tank, a wave generator, and a loud jet engine that pipes in hurricane-strength winds.

The tank is an essential tool for research into how coral can lessen hurricanes’ damage to coastal communities. I was here to see how it works.

Tropical storms are among the most dangerous and costly natural disasters in the US. Hurricane Ida, which made landfall in Louisiana last August, for example, cost Americans roughly $75 billion, cut power to more than a million homes and businesses, and killed dozens of people.

Engineers defend against these threats by building structures like levees and seawalls, but these tools are imperfect. They can damage the environment, they don’t always hold, and they can be pricey themselves.

But for many communities, a simpler (and cheaper) solution could be a big help: restoring coral reefs.

Coral reefs are among the many ecosystems, including mangrove forests and wetlands, that can protect us. They function like natural breakwaters during a hurricane, helping to dampen or “break” waves that can flood homes and offices near shore.

The problem is that coral reefs are dying. Along with disease and pollution, climate change — the same force making hurricanes more damaging — has wiped out half of the world’s reefs. So to protect our coastal cities, scientists say, we should also protect and restore our coral reefs.

Across the US, coral reefs help safeguard the homes of more than 18,000 people and avert $1.8 billion in flood damage each year, according to a recent analysis by the US Geological Survey (USGS).

Florida, home to the world’s third-largest barrier reef, receives a large chunk of those benefits. Reefs provide flood protection to more than 5,600 Floridians and prevent $675 million worth of damage to property and peoples’ livelihoods each year, the analysis found.

Reefs reduce the amount of energy in waves by an average of about 97 percent, not unlike how a speed bump slows a car. Waves with less energy are smaller and slower and don’t deal as much damage when they reach the shore.

Even just a small difference in a reef’s height can make a big difference in risk, according to a study published last year in the journal Nature. Flood risk is often measured by what’s called the 100-year-flood zone — an area in which the chance of a flood in a given year is 1 percent. If coral reefs in the US lose 1 meter of height, that zone in the US would grow by 104 square kilometers (or about 26,000 acres), putting about 51,000 more people at risk of flooding, the study found.

That’s a big reason why losing reefs is so frightening. “These losses could escalate flood risk in just years to levels not anticipated by sea-level rise for decades or a century,” the authors of the Nature study wrote.

In Miami-Dade County, sea levels are set to rise well over a foot in the next three decades. It’s one of the most flood-prone regions in the country, and a fitting place to study the impact of hurricanes.

When I visited the University of Miami in April, the hurricane simulator was filled with about a meter of water and a structure made of hollow, hexagonal tubes was submerged in the center. Scientists use the simulator to test how well structures like this one (called a “seahive”) dampen wave energy, with and without coral on them.

From a desk equipped with three computer screens, a doctoral student turned on the machine. The jet engine whirred and, inside, ocean-like conditions appeared. Gusts of wind created texture over the water, which erupted in waves that slammed into the seahive.

Experiments in the simulator have shown that structures like this with coral on them more effectively reduce wave energy, in some cases reducing it by up to 95 percent, according to Landolf Rhode-Barbarigos, a researcher at the University of Miami.

Before the end of the year, Rhode-Barbarigos and other scientists will sink a few different structures, including seahives, in North Miami Beach. They’ll plant coral on some of them to test them in real-world conditions for the first time.

The University of Miami’s restoration project is considered a “hybrid” approach because it involves a human-made structure and live corals. But dozens of initiatives around the world — and many in Florida — involve planting coral straight on dying or damaged reefs, as I reported in April. A key selling point for these projects is that they can help safeguard coastal communities against storms.

Researchers at the University of Miami and elsewhere have also been developing coral colonies that grow quickly and better tolerate rising ocean temperatures, disease, and predation, often with some out-there approaches. The idea is to regrow reefs with corals that can tolerate the forces that wiped them out.

The US spends roughly $500 million a year to limit coastal flooding and related threats, according to USGS. In some years, those numbers are much higher: The Army Corps of Engineers spent $15 billion in 2018, for example, on projects to prevent flood and storm damage.

These figures make what cities spend to restore ecosystems look like pennies. The nation’s largest project to restore reefs, an initiative in the Florida Keys called Mission: Iconic Reefs, has received only around $5 million in federal funding.

“Funds for disaster management and climate adaptation are tens to hundreds of times larger than funds for habitat conservation and restoration,” authors of the Nature study wrote.

That’s starting to change as government agencies look to reefs as a defense against tropical storms. One example is the seahive project, which was initially funded by the National Cooperative Highway Research Program (which is in turn funded by the federal government).

The Department of Defense is also shelling out millions of dollars for coral restoration through DARPA’s “Reefense” initiative. This is a big deal because it opens up an enormous new pot of money for reef conservation and restoration, said Andrew Baker, a coral researcher at the University of Miami who’s helping make corals more resistant to extreme heat.

Ultimately, protecting and restoring coral reefs is about much more than protecting coastal cities. Though they cover less than 1 percent of the world’s oceans, reefs sustain about one-quarter of all marine life and half of all federally managed fisheries. It’s hard to think of a better example of how helping an ecosystem is also helping ourselves.