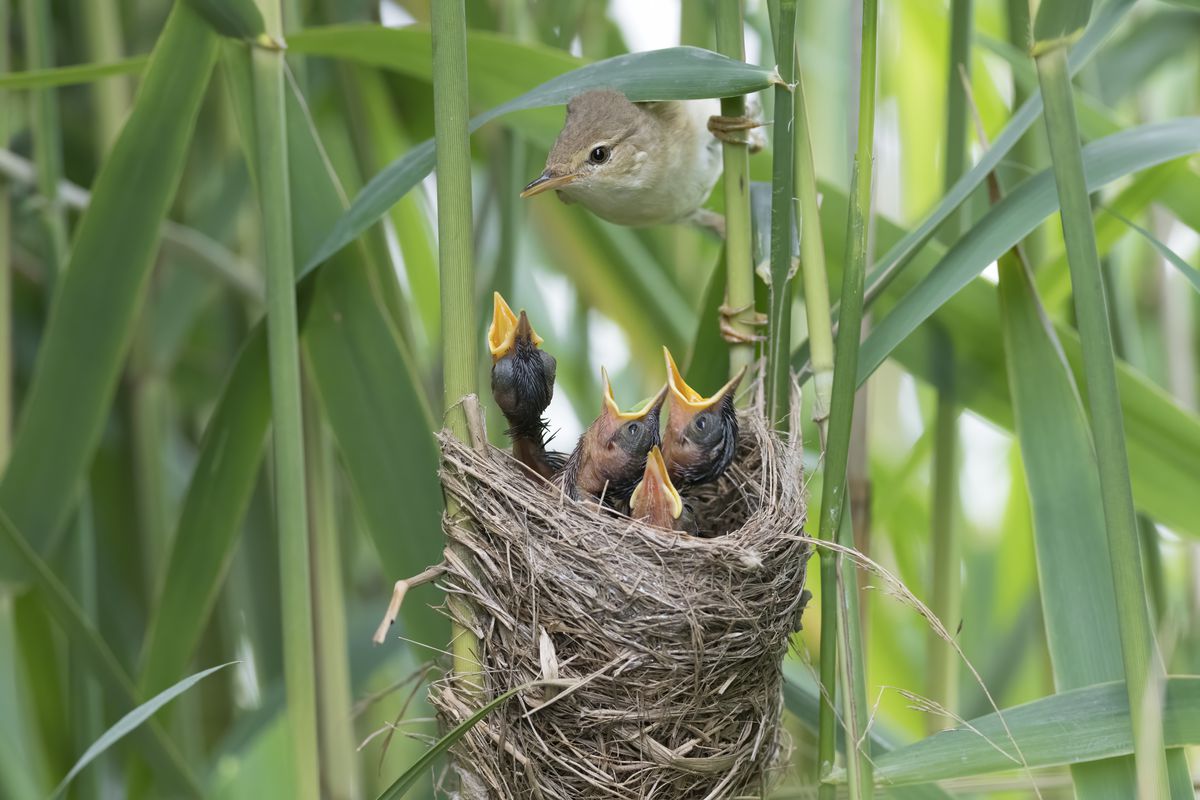 The Eurasian reed warbler might look like any other small brown bird, but up in the air it does something extraordinary. It travels more than 7,000 kilometers (4,350 miles) each year between Europe and Africa, crossing the Sahara Desert and flying as high as 6,000 meters (nearly 4 miles), sometimes staying airborne for 30 hours straight.

Even more impressive is its ability to navigate with extreme precision. Year after year, many Eurasian reed warblers, which each weigh half as much as a golf ball, return to the exact same patch of European forest to breed. Scientists sometimes catch them in the very same net they did the year before. And it’s not just warblers. Species from city pigeons to cuckoos are able to home in to a precise location, as if it’s saved in some kind of internal Google Maps.

Birds navigate in many ways, among them sight, smell, and even the stars. Perhaps most remarkably, they seem endowed with some kind of biological compass that helps them follow Earth’s magnetic field — an invisible field produced by the planet’s rotation and liquid-metal core.

The mysteries of magnetic perception in birds have intrigued scientists for decades. Now we have some fresh clues into this astonishing ability. A new study in the journal Science suggests that Eurasian reed warblers — and likely other migratory songbirds — sense a specific aspect of Earth’s magnetic field, called the angle of inclination, to know where to roost on their journey north. It functions as a kind of magnetic address or “stop sign,” the researchers write, that tells the birds when they’ve arrived.

If you’re a bird that migrates to breed, you’re better off remembering where you were born. Your birthplace is ideal for raising chicks of your own because you — a bird that survived — were raised there. For the warbler, the challenge is getting there from thousands of miles away.

While humans use compasses and GPS to improve our navigation, birds use built-in hardware. They see in color and can remember landmarks like particular trees or buildings, said Dmitry Kishkinev, a researcher and expert in animal behavior at Keele University who was not involved in the study. Show a racing pigeon a view of the landscape before releasing it, for example, and it will take a more precise route back to its coop, he said. Birds, especially seabirds that might not have as many visual signposts, can also navigate by scent, Kishkinev added.

What’s remarkable is that migratory birds also seem to know where they’re going even without hints from the environment, said Atticus Pinzon-Rodriguez, a researcher at Lund University who was also not affiliated with the research. Ornithologists figured this out decades ago by putting birds in windowless, funnel-shaped cages with ink on the bottom. When the birds tried to escape, they left behind a trail of ink in the direction of their flight. Sure enough, migratory birds try to head north in the spring and south in the fall, in line with bird migration in the wild. They’re picking up on Earth’s magnetic field, Pinzon-Rodriguez said.

Some theories of how birds sense this invisible magnetism are truly mind-bending. One theory based on quantum mechanics proposes that subtle changes in Earth’s magnetic field can cause a chemical reaction — perhaps involving quantum entanglement — within light-sensing proteins called cryptochromes in the eyes of birds. Those reactions translate into some kind of visual cue, Kishkinev said, almost like a special pair of glasses that reveals contours of the magnetic field.

An older theory is that birds have magnetic material in their beaks that functions as a compass, Kishkinev said — but despite their best efforts, scientists have yet to actually find that mechanism. A third idea, dating back to the 19th century, is that birds perceive the magnetic field through structures in their inner ear, which is what animals use to distinguish up from down and to sense acceleration.

Again, these are all just theories, Kishkinev said. But no matter the mechanism, scientists are sure that birds are using Earth’s magnetic field to travel.

The mystery deepens when scientists consider that the planet’s magnetic field isn’t fixed — it moves. In fact, since 1831, the magnetic north pole has shifted more than 600 miles. (The magnetic poles have even reversed many times.)

The slight movement of the magnetic poles made the new study possible, said Joe Wynn, the lead author and a researcher at Germany’s Institut für Vogelforschung. If birds use the planet’s magnetic field to return to their breeding sites, then it stands to reason a shifting field might mean that breeding sites shift, too.

To find out, Wynn analyzed nearly 80 years of data on the Eurasian reed warbler that show where individual birds breed each spring. He then compared that information to changes in the magnetic field — specifically, how certain characteristics of the field are shifting, including its strength and inclination. Inclination, or dip angle, is the angle between the magnetic field and the surface of the Earth.

Sure enough, he discovered that while birds usually arrive at the same site year after year, sometimes they’re slightly off. And when they are, it’s typically in the same direction that the inclination angle has moved. That suggests that the Eurasian warblers may be tracking inclination to navigate, Wynn said. (The researchers didn’t find a strong correlation with changes in other characteristics of the magnetic field.)

The angle of inclination can be thought of as a “stop sign” on a bird’s journey north to breed, according to the researchers. They likely start their flight on a fixed course, Wynn said, and then once they sense an angle of inclination that matches what they’ve sensed before, something inside their brain tells them to land, find a mate, and raise a family.

Because the magnetic field moves, it’s not the most precise map, Wynn said, but it’s detectable around the world and guides migratory birds most of the way, perhaps within feet. Once they’re in the vicinity, they likely use other senses — the sight of a familiar pond or favorite tree, for example — to find the right spot.

Wynn’s research into inclination angles doesn’t tell the full story of how birds use the magnetic field to navigate. While the new study uses a massive trove of real-world data, the findings are based on a computer model and still need to be verified in a controlled experiment, Pinzon-Rodriguez said. Previous research by Kishkinev and others also suggests that birds can essentially pinpoint their location within a magnetic map of the world — which scientists call “true navigation” — even if they’re displaced thousands of miles. Whereas inclination only signals when birds should stop, Wynn said, this research implies birds also know where they are in space.

But humans may be making it harder for them to find their way, Pinzon-Rodriguez said. While Earth’s magnetic field encompasses the entire planet, scientists suspect that humans are scrambling it locally through our electrical equipment, radio towers, and other technologies.

European robins were unable to orient themselves in the presence of certain radio waves, for example, in a series of experiments published in 2014 in the journal Nature. “The effects of these weak electromagnetic fields are remarkable: They disrupt the functioning of an entire sensory system in a healthy higher vertebrate,” Henrik Mouritsen, a biologist at the University of Oldenburg who led the study, said in a press release.

It’s not clear whether the interference is actually harming migratory birds like the Eurasian reed warbler in the wild, given that they use other tools to navigate too. But it shows just how profoundly humans impact the Earth, sometimes in invisible ways.