Home Technology A night of chaos: 4 winners and 2 losers from the 2022...
Technology 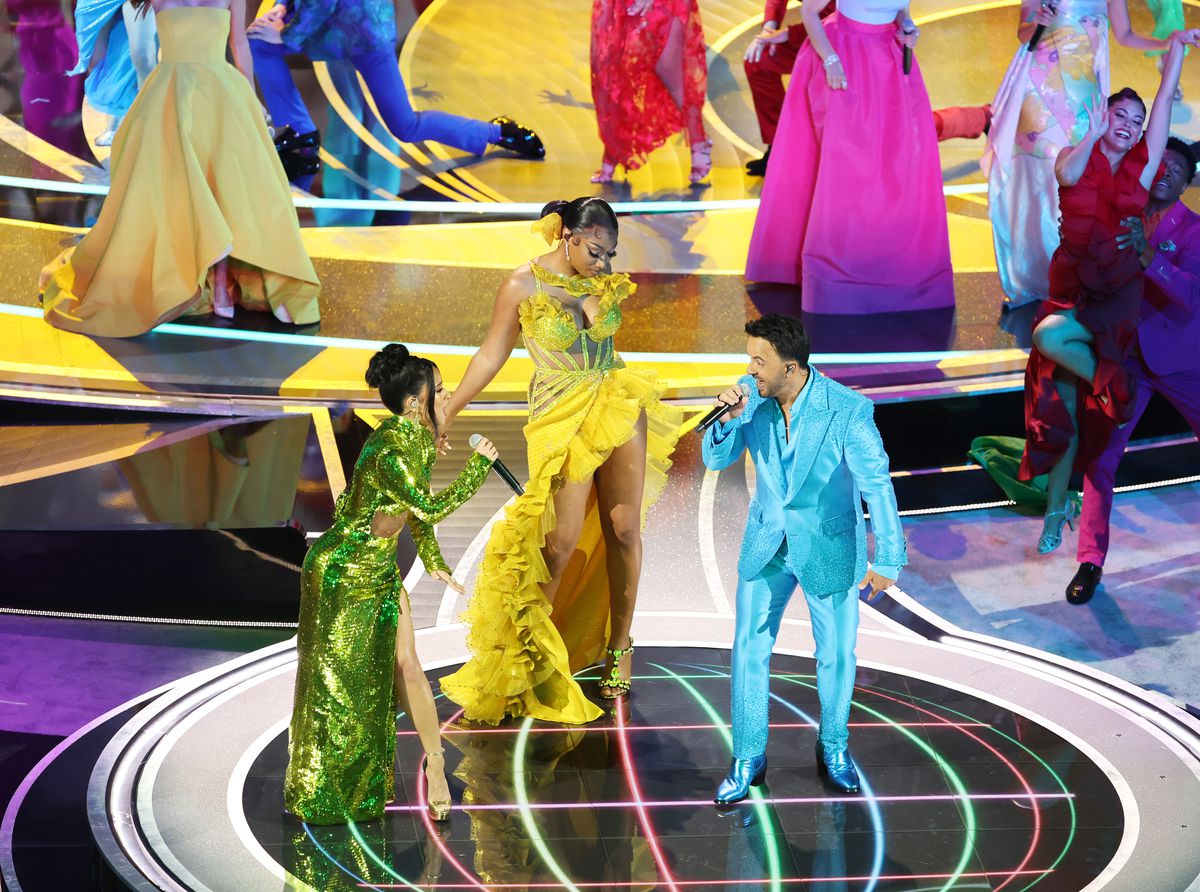 The dictum that you can’t spell “Oscars” without “chaos” may not have been an adage before tonight, but it won’t be far from anyone’s minds when the Academy next gathers, thanks to an uneven and wildly unpredictable 2022 ceremony.

First, there was the telecast, which opened with a surprise Beyoncé drop that felt weirdly out of place, and included a wince-inducing Oscar-special rewrite of “We Don’t Talk About Bruno” that made zero sense in any context. The production’s decision to move many awards to the pre-show turned baffling when the presenters still announced those winners during the ceremony, doing nothing to help save time or momentum. That didn’t mean there weren’t some genuinely moving speeches, and even an amusing host, but bizarre moments were the norm.

But of course, all of this was our regularly scheduled chaos. Our standard, built-in, “will someone read the wrong name?” Oscar-night chaos. None of that prepared anyone, at home or in the Dolby Theatre, for the evening’s stunner — a true Oscar-night first, when the evening’s Best Actor, Will Smith, smacked a presenter, Chris Rock. And they say live TV is boring!

Here are four winners and two losers from tonight’s Oscars, including the biggest winner of all: mayhem.

Few Oscars hosts in recent memory have gone quite as hard as co-host Amy Schumer, who had a scandalized Jessica Chastain covering her mouth in shock during Schumer’s opening roast. Taking the stage alongside co-hosts Wanda Sykes and Regina Hall, self-described “unbearable white woman” Schumer managed to stick the landing.

Breezily announcing she hadn’t seen any of the year’s films, Schumer stopped briefly to toy with a few victims — Don’t Look Up (“I guess the Academy members ‘don’t look up’ reviews”), King Richard (“After years of Hollywood ignoring women’s stories, this year we finally got a movie about the incredible Williams sisters’ … dad”) — Schumer settled in with her true victim: Aaron Sorkin’s leaden, soulless Lucille Ball biopic, Being the Ricardos.

“The innovation to make a movie about Lucille Ball without even a moment that’s funny,” Schumer marveled. “It’s brilliant. It’s like making a biopic about Michael Jordan and just showing the bus trips between games. Amazing.”

Besides her come-out-fighting opening, Schumer also knew how to throw in a gentler joke to cut the tension when necessary. After the jaw-dropping scene of Will Smith slapping Chris Rock in the face live on camera, Schumer wandered out front again post-commercial break in cheery good humor to ask what she’d missed. “The energy seems different in here,” she mused, and the audience laughed with palpable relief.

Schumer also threw in a couple of fat jokes (at herself and her friend Jennifer Lawrence), an unpleasant throwback to the worst traditions of the comedy roast. But for the rest of her bit: Mean jokes that have the benefit of being true? Nicer jokes when the audience could use a break? Absolutely the best possible scenario. On a night characterized by frequently bizarre production choices, Schumer started off the Oscars with just the jolt of acidic, vicious energy that the always self-congratulatory show needed — and softened the vibes when it needed that too. —Constance Grady

It’s been a long time since Beyoncé last performed on live television (Coachella was in 2018, and her last performance at an awards show was the Grammys in 2017), and the queen returned, opening the Oscars in royal fashion.

Bey, draped in tennis-ball neon yellow and beaming in from the courts of Compton that Venus and Serena Williams once played on, sang “Be Alive,” her Oscar-nominated song from the Williams sisters’ King Richard. Beyoncé, her orchestra, and her dancers (some sporting beads reminiscent of Venus and Serena’s early playing days) delivered a performance that drew inspiration from and evoked the struggle — racism, sexism, classism — the Williams family faced, the ongoing work they continue to do, and an appreciation for everything their triumph symbolizes. The performance was equal parts power, politics, and thrill — a mix that only Beyoncé could deliver. —Alex Abad-Santos

For the first time this year, the Oscars moved eight of their technical awards to the pre-ceremony. The change — which affected the categories of Sound, Editing, Makeup and Hairstyling, Original Score, and Production Design, along with Documentary Short, Animated Short, and Live Action Short — was billed as a time-saving consideration.

Specifically, Academy President David Rubin wrote in a letter to members this February, it was supposed to save time for more of the Oscars’ favorite time-waster: all those montages. The change, Rubin explained, was to “provide more time and opportunity for audience entertainment and engagement through comedy, musical numbers, film clip packages and movie tributes.”

In theory, the change is a clear loser. Shoving the recognition of talented craftspeople offstage so the Oscars can do a montage about how movies exist? A misfire! In practice, it turned out to be even worse. The ceremony broadcasted the presentation of the nominees as well as portions of their acceptance speeches, in the process shaving off perhaps 30 seconds total from each announcement.

So to sum it up: The Oscars are still bloated and self-congratulatory, and they didn’t even finish up until 11:42 pm. And we all had to sit through a baffling montage about how when the Flash enters the Speed Force, that’s the Oscars. Worst of all possible worlds. —Constance Grady

“We Don’t Talk About Bruno,” the inescapable hit from the Pixar film Encanto, isn’t even nominated for an Oscar, but its viral popularity is likely what fueled the creative choice to drop a performance of the song smack in the middle of the award show. Unfortunately, the whole thing was kind of a mess.

Perhaps it would have been better to open the show with the song, swapping places with Beyoncé’s tennis court performance of “Be Alive” from King Richard, but even in that scenario, I’m not sure “Bruno” would’ve landed. The original singers were present, alongside singers Luis Fonsi and Becky G, but the seams showed as the performers twirled around the screen, waiting for an unlikely guest to show up: Megan Thee Stallion? It’s unclear what the connection is between the film and the rapper, besides a very transparent bid for more goodwill from young people (as if making the song trend on TikTok wasn’t enough). Also, the lyrics were changed to be about the Oscars itself, which is beyond corny, but of course, the desperation of this institution continues to shine through. But they tried, as usual! We would’ve been better off not talking about “Bruno” at all this evening. —Melinda Fakuade

This year’s Oscars was full of visual and sonic clutter — the aforementioned “Bruno” rewrite, a celebration of the 28th anniversary of Pulp Fiction, an alarmingly jaunty in memoriam segment complete with audience reaction shots. Amid all this noise, however, what really stood out were the speeches.

From West Side Story’s Ariana DeBose talking about how art shaped her queer identity and empowered her, to Coda’s Troy Kotsur dedicating his ASL speech to his father, to The Eyes of Tammy Faye’s Jessica Chastain speaking about how the woman she played on screen has emboldened her to speak for unity and against discrimination, the low-frills segments that the telecast seemed so determined to distract us from won out. Those human moments will endure longer than any of the show’s manufactured, thirsty bits. —Alex Abad-Santos

First, there was the grab bag of awards themselves: Dune won most of the technical awards of its 10 nominations, but missed out on the major ones, while CODA took the award for Best Picture despite being nominated in just three categories. (The last time a film won the big prize with so few nominations was 1932’s Grand Hotel, which only had one.) The Apple TV-ness of it all — CODA is the first film from a streaming platform to win Best Picture, despite years of high-profile attempts by Netflix — just made its win that much odder.

Another much-ridiculed choice, the show’s introduction of fan-favorite awards categories, led to lots of random love for Zack Snyder and superhero films but felt like a baffling interstitial for the rest of the ceremony. Congrats to… Oscar-winner “The Flash Enters the Speed Force” from Zack Snyder’s Justice League? Sure, Academy, whatever.

But none of that prepared anyone, at home or in the Dolby Theatre, for Will Smith marching onstage and slapping Chris Rock across the face (during Rock’s Best Documentary presentation) after Chris Rock cracked a joke about Jada Pinkett Smith — something he’s apparently done before. Rock’s joke razed Jada for her shaved head — something Jada, who has alopecia, clearly didn’t appreciate. Cue Will reacting, uh, badly:

Smith then proceeded to 1. be comforted by Denzel Washington and Tyler Perry, apparently plucked from the evening’s unexpected cameo dartboard; 2. win the Oscar for Best Actor for the titular role in King Richard. Smith spent his entire speech discussing his vulnerable headspace thanks to playing Richard Williams, a man known for “defending his family,” all while Venus Williams herself looked on sadly, and most of the audience just looked shook up.

No amount of jokes and references to making amends could really lift the evening after that. “Will Smith said it all,” Anthony Hopkins deadpanned half an hour or so later. Was he quipping? Was he serious? Does it matter? Does anything matter? —Aja Romano