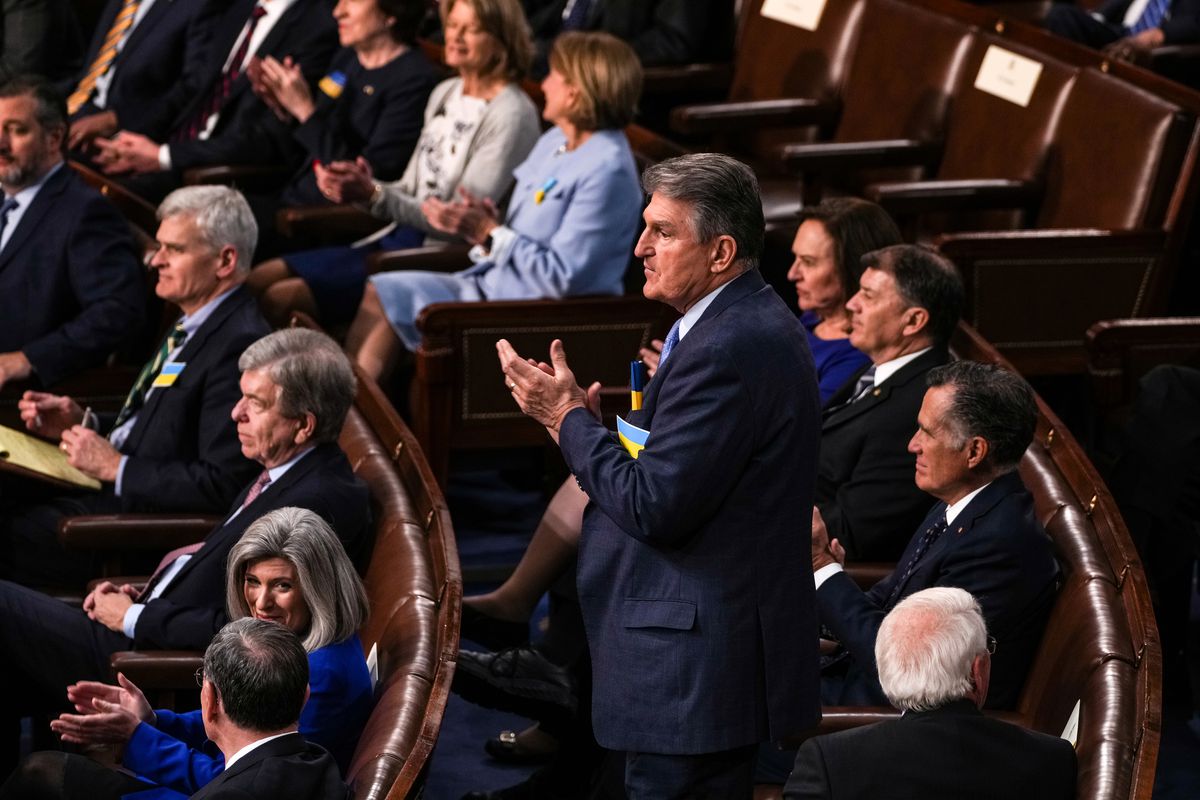 President Joe Biden delivered his State of the Union address to Congress on Tuesday, at a particularly tense moment for his administration: While he’s still struggling to address the domestic issues plaguing his tenure, the world has been upended by Russia’s war on Ukraine.

“Six days ago, Russia’s Vladimir Putin sought to shake the foundations of the free world, thinking he could make it bend to his menacing ways. But he badly miscalculated,” Biden said, stressing the United States’ support of democracy around the globe.

His speech aimed to counter domestic anxieties as well, particularly on inflation, as he’s grappled with sinking approval ratings tied to enduring concerns about the pandemic and economic uncertainty.

A host of Vox reporters followed the roughly 70-minute address. Here are four things that stood out from it.

Framing the war in Ukraine as a battle between freedom and tyranny, Biden emphasized foreign policy more than any State of the Union since the George W. Bush administration, and cited Ukrainian President Volodymyr Zelensky’s recent remark that “Light will win over darkness.”

“Let each of us here tonight in this chamber send an unmistakable signal to Ukraine and to the world,” said Biden to cheers from Cabinet members and legislators of both parties in attendance.

Biden campaigned on rebuilding relationships with allies after former President Donald Trump openly mocked global alliances and even threatened to pull out of NATO. On Tuesday, Biden emphasized the united global response to Putin’s hostility. “We see the unity among leaders of nations and a more unified Europe, a more unified West,” he said.

Explaining the coordinated international response from NATO, the EU, Asian partners, and beyond — “even Switzerland” — Biden said the US is “inflicting pain on Russia and supporting the people of Ukraine,” including levying intense economic sanctions, choking Russia off from international banking, targeting the country’s central bank, and limiting its access to technology.

“To all Americans, I will be honest with you, as I’ve always promised. A Russian dictator, invading a foreign country, has cost around the world,” Biden said. “He has no idea what’s coming.”

At times, Biden’s description of the unfolding war against Ukraine echoed the language of the Cold War. “Six days ago, Russia’s Vladimir Putin sought to shake the foundations of the free world,” said Biden. “We countered Russia’s lies with truth. And now that he has acted, the free world is holding him accountable.”

There were a few new policies announced: American airspace will now be closed to Russian flights, and a new Justice Department task force will go after “Russian oligarchs and corrupt leaders who have bilked billions of dollars off this violent regime.”

This is not the State of the Union that Biden likely imagined he would give a year ago when he took office. Russia merited just four paragraphs at his wide-ranging address on global affairs that he delivered upon taking office. “We will not hesitate to raise the cost on Russia and defend our vital interests and our people,” he said a year ago.

China is closely watching the US reaction to Russia, and Biden’s message for the Chinese premier was short and largely economic — that we can still make things in America. —Jonathan Guyer

With inflation at a four-decade high and hurting Americans’ spending power — as well as Democrats’ poll numbers — Biden used the State of the Union to put forward his plan to stop it.

That plan sounded rather … familiar.

“I call it building a better America,” Biden said. And indeed, much of what he then laid out had been featured in his stalled Build Back Better agenda — though he did not utter that exact phrase. Sen. Joe Manchin (D-WV), who is blocking the bill, also happens to dislike the name Build Back Better. Biden attempted to rebrand this plan as one that would fight inflation and reduce the deficit, both major concerns of Manchin.

Some Build Back Better policies got more airtime than others, and three got detailed shoutouts. The focus was on cost-cutting: Biden said he wanted to cut the cost of prescription drugs, cut energy costs by combating climate change, and cut child care costs. A few other Build Back Better policies were briefly name-checked, but those three may be the heart of what Biden still thinks he can pass. Others that are reportedly being dropped from the bill, like paid leave and the expanded child tax credit, got only a passing mention.

Biden’s attempt to claim these BBB policies would fight inflation was unconvincing. These are long-term priorities that Democrats think would be good ideas, but they aren’t responsive to the current inflationary situation.

In fact, that’s been a major issue with Build Back Better all along: The bill is far more focused on achieving long-term Democratic social policy goals than it is on addressing the economy’s current problems. If Biden hoped to pivot and convince Americans he was taking inflation seriously, it’s not clear this will do the job. —Andrew Prokop and Li Zhou

Biden’s message on Covid-19 aimed to thread a needle: that the worst of the Covid-19 pandemic is over, and the government still wants to help America fight the virus.

But with almost no one in the House chamber wearing masks, it was evident that many in Congress are ready to move on.

“I know you’re tired, frustrated, and exhausted,” Biden said. “Tonight I can say we are moving forward safely, back to more normal routines.”

However, Covid-19 has not gone away. While the peak in omicron variant cases has passed, Americans are still getting sick and dying, with the daily average of new cases at 65,000 and an average of 1,800 Americans still dying each day as of February 28. Infections and deaths are poised to drop further, but how fast depends on the spread of the disease, as well as any mutations to the virus itself.

To contend with the current phase of the pandemic and future threats, Biden laid out a four-part strategy that includes using more Covid-19 tools like vaccines and a new “test to treat” program; preparing for Covid-19 variants; reopening schools and businesses for in-person attendance; and expanding US vaccine distribution around the world.

These things cost money, however, and will require Congress to grant the funds to pursue them. A divided legislature in an election year does not bode well for getting this done any faster. —Umair Irfan

A handful of issues that Biden prioritized earlier in his tenure got short shrift in his marquee annual address, a fact sure to grate on their proponents. But the lack of messaging to Black voters was particularly notable.

At a moment when many Black Americans have lamented Biden’s silence and lack of action on key equity issues, the president barely acknowledged the issues most important to them.

And though Biden once emphasized his desire to improve the unique challenges that historically underserved racial groups face, he avoided targeted messaging to those groups. Notably absent from Biden’s speech were the terms “Black,” “African American,” “Asian American,” and “Latino,” despite public pressure to make antiracism a part of his policy platform. Biden’s comments on issues like policing, voting rights, and gun violence did address some demands of racial minorities.

Biden made it clear that his administration has never supported the movement to reallocate police funding to community services. “The answer is not to defund the police. The answer is to fund the police with the resources and training they need to protect our communities,” he said, after bemoaning the recent deaths of two Dominican American NYPD officers.

Biden pointed to community policing as a solution to restoring trust and safety in communities, in addition to requiring body cameras, banning chokeholds, and restricting no-knock warrants for police officers — all measures that the Justice Department has already taken and that Biden has pushed for in the past. He even mentioned the need to fund strategies like community violence interruption, an alternative to policing that has not been proven to work. Evidence also shows that banning chokeholds does not reduce police violence.

Biden’s commentary on neighborhood violence generally favored the police and his failure to mention the recent convictions in high-profile cases involving the police killings of Black people was stark.

The president’s very brief mention of voting rights is likely to agitate advocates who saw the window to pass legislation like the John Lewis Voting Rights Act and Freedom to Vote Act close in January, after months of delay from the Biden administration. Republicans across dozens of states have passed dozens of restrictive voting laws that threaten what Biden called a fundamental right. The same voting rights activists who helped mobilize voters for Biden’s victory believe Biden cannot meet the moment with just words.

Chief among Biden’s promises was nominating a Black woman to the Supreme Court, a move he made by naming Judge Ketanji Brown Jackson on Friday. But on Tuesday night, Biden didn’t frame the nomination as a promise fulfilled to the Black community. The president briefly mentioned the need to “increase our historic support” in historically Black colleges and universities. —Fabiola Cineas