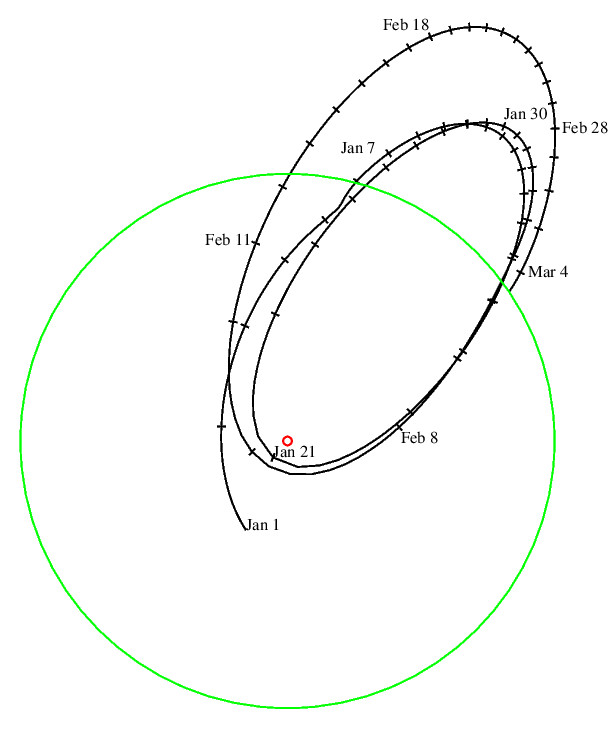 For the last seven years, a leftover piece of an old SpaceX Falcon 9 rocket has been circling the Earth on a very wide orbit, having a pretty unremarkable time. But that’s all about to change on March 4th, when this rocket piece is predicted to accidentally slam into the far side of the Moon. And according to the astronomer who first figured this out, it’s a reminder that we need to take better care of our deep space junk.

The doomed component is part of a rocket that launched from Florida in February of 2015. The vehicle lofted a particularly valuable satellite for the National Oceanic and Atmospheric Administration called DSCOVR, which monitors solar winds coming from the Sun to better predict space weather. In order to perform its job properly, DSCOVR was designed to go to a very distant orbit roughly 1 million miles from Earth. And to get the satellite out there, part of SpaceX’s Falcon 9 — the upper stage or second stage on top of the rocket — lofted the vehicle up to an incredibly high altitude above Earth. Once the satellite was deployed, the upper stage was abandoned and left in its extremely high and elliptical path around the planet.

Now, after seven years of orbiting the Earth, the upper stage’s trajectory is going to serendipitously coincide with the Moon. It’s certainly not the first time that a human-created object has collided with the Moon’s surface: NASA has intentionally sent rocket parts and spacecraft careening into the lunar dirt before. But this Falcon 9 may be the first piece of space junk to make an unplanned dive bomb onto the Moon when it wasn’t headed there to begin with. While this won’t cause any problems for our planetary satellite, the incident does serve as a reminder to the space community that we may want to come up with better ways for disposing of our space trash — even the pieces that travel far out into deep space.

“Ideally, junk of this sort would be disposed of a little bit more intelligently,” Bill Gray, an astronomer and asteroid tracker running Project Pluto, tells The Verge.

Gray was the first to figure out earlier this month that the Falcon 9 would hit the Moon, which was then reported by Ars Technica. He’s one of the few people who has been tracking the rocket fragment since it launched. Following the DSCOVR mission, he and other amateur space trackers equipped with telescopes and cameras have been periodically observing the object every couple of weeks or months. After each observation, Gray would update the stage’s projected orbit around Earth using a software program he’s developed over the last two decades for his company known as Project Pluto. Originally the software was made to predict orbits for asteroids and tiny moons around distant gas giants. But recently, he’s been using the software to track the stuff humans have created around Earth. “I sort of repurposed it when junk of this sort started to become a problem,” Gray says.

Determining the Falcon 9’s path has been a little complicated over the years. Space junk like this second stage can absorb sunlight and re-radiate it out into space. That creates a gentle force that can push the object off its path, making it difficult to predict where it’s headed over the long term, Gray says. Additionally, the stage made a close flyby of the Moon on January 5th, and the gravity from an encounter like that can slightly perturb the orbit. “It’s sort of like pool ball bouncing off another pool ball,” Gray says. “You know exactly where the pool ball is going, but once it bounces off, it may go off at a little bit of a slightly unexpected angle.”

Given all of this, there were some tiny uncertainties about the Falcon 9’s collision course at first. But Gray and others now have a pretty solid idea of what’s going to happen. After the second stage reaches its most distant point on its orbit in late February — known as apogee — it will start falling back toward the Earth and cross paths with the Moon instead. It will then hit the far side of the Moon at around 7:25AM ET on March 4th, moving at roughly 2.58 kilometers per second — or about 5,771 miles per hour. Weighing roughly 4 tons, the impact should create a crater up to 20 meters, or more than 65 feet, across. Gray says astronomers will know the exact angle and location of the impact more precisely in early February when they observe the object again.

Fears that this will somehow harm our Moon are pretty unfounded since it’s a dead rock that we’ve hurled plenty of objects at before. During the Apollo missions, we crashed various rocket stages into the lunar surface, and both the US and Russia have sent plenty of spacecraft hurling to the lunar ground in pursuit of winning the space race. NASA has also intentionally crashed objects into the Moon in order to excavate the soil and see what materials are lurking underneath, as the agency did during the LCROSS mission in 2009.

In fact, the Falcon 9’s impact may provide a similar opportunity for NASA to see what materials lie beneath the surface. Gray says he’s eager for NASA’s Lunar Reconnaissance Orbiter and India’s Chandrayaan-2 spacecraft — both in orbit around the Moon — to observe the aftermath. “They are interested in taking a look at this,” Gray says, noting he’s had some contacts reach out to the LRO team.

Though there’s nothing to fear from the collision, Gray does think this is a good reminder that we need to have better protocols for disposing of space junk — even the pieces that are left in super high orbits. Most of the concern for space debris revolves around pieces left in lower orbits, as they can threaten satellites or the International Space Station. Typically, companies like SpaceX will intentionally dispose of the second stages of their rockets when they go to lower orbits. On those occasions, SpaceX will purposefully direct the object down toward the Earth at a very low angle so that it burns up in our atmosphere somewhere over the ocean. That way, it’s unlikely any large pieces will survive the breakup, and those that do will be falling over unpopulated areas.

But for missions that go to the Moon or to extremely high orbits like DSCOVR, sometimes rocket stages will be left out in the wilderness after the launch is over. Even recently, when NASA launched its new space observatory, the James Webb Space Telescope, the Ariane 5 second stage that carried the spacecraft into orbit remained in space and is now orbiting the Sun, Gray says. (There’s also a Tesla Roadster from a certain billionaire currently orbiting the Sun, reaching as far as the distance of Mars, though that was sent there on purpose.) And most space agencies and official tracking entities like the Space Force don’t really keep tabs on these objects.

Gray says that these pieces of junk in higher altitudes can still be an issue when they’re abandoned. Such objects are typically left in extremely elongated orbits around the Earth, and if they were to come back and hit our planet, they’d come in much faster and at much more vertical angles to the atmosphere. That makes it more likely certain pieces could survive the reentry. “If it does come in and hit the Earth, there is an admittedly very small chance of a small bit surviving and crashing into the ground,” says Gray.

Of course, such events are exceedingly rare and don’t pose any realistic threat to people at the moment. However, Gray says he and others tracked a similar piece of space junk that entered the atmosphere over Sri Lanka in 2015, as well as two Chinese lunar rocket stages that re-entered over the Pacific Ocean. Ironically, he argues that we might want to try intentionally disposing of these stages on the Moon rather than let them hit Earth by accident. That way, we know where they’re headed, and we could get some scientific value out of the crashes.