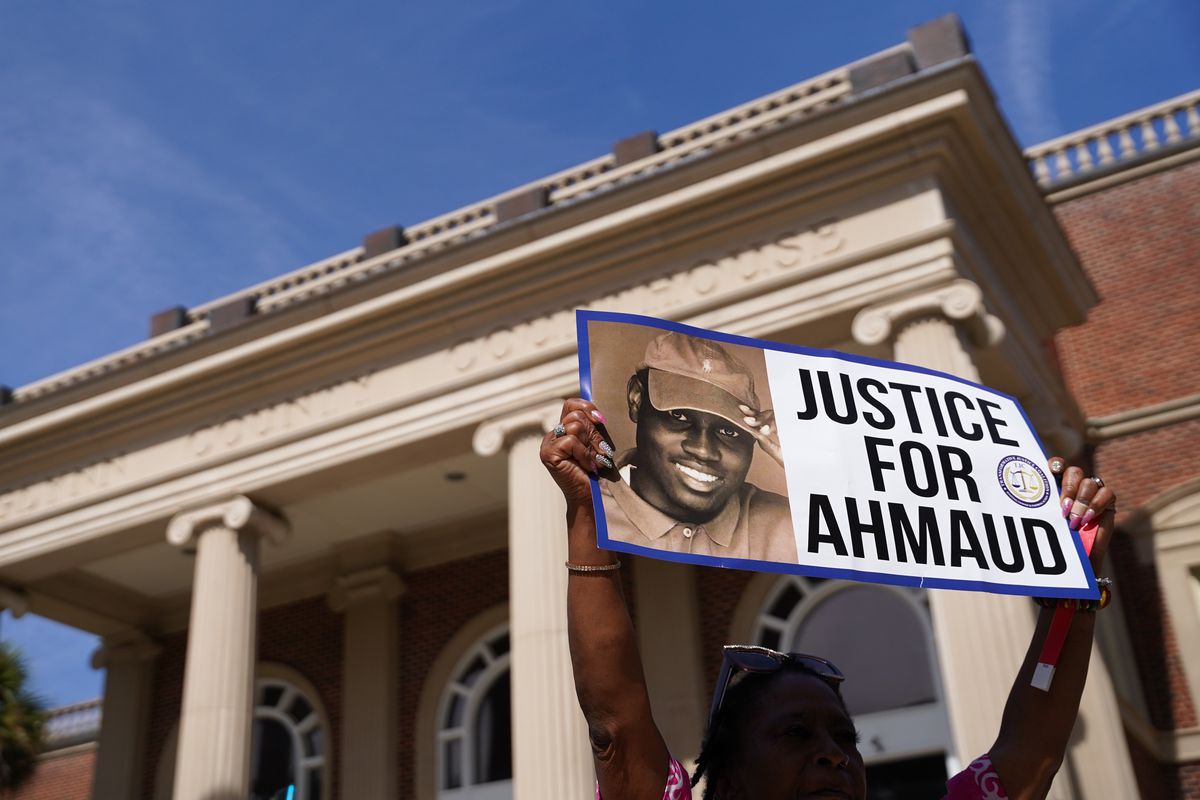 Nearly two years after Ahmaud Arbery, a 25-year-old Black man, was shot and killed in a suburban Georgia town while jogging, the three white suspects accused of the slaying — Greg McMichael, his son Travis McMichael, and their neighbor, William “Roddie” Bryan — are now on trial. They face charges on a total of nine counts, including malice murder, felony murder, aggravated assault, and false imprisonment.

Arbery’s killing in February 2020 ignited national outrage. When a video Bryan recorded from his vehicle while following Arbery went viral online, viewers called it an unequivocal lynching. The graphic footage shows the McMichaels, both carrying guns, pursuing Arbery in a truck after he ran down their street in the mostly white Satilla Shores neighborhood near Brunswick. Following a short chase, the men corner Arbery, and a confrontation between Arbery and Travis McMichael ensues. During the struggle, Arbery is shot three times, twice in the chest, after which he slumps to the ground. It took 74 days after Arbery’s death for the men to be arrested and charged.

Defense attorneys will likely argue that the men’s actions were protected by Georgia’s citizen’s arrest law, which at the time allowed a person to detain someone whom they believe just committed a crime. The attorneys may claim the men acted in self-defense while attempting to carry out a legitimate citizen’s arrest of Arbery, whom they suspected of burglary.

Georgia’s outdated and dangerous citizen’s arrest law — one that was created in an era of slavery and emboldened citizens to act on their worst biases — has since been repealed. The law was replaced with a bill that limits who can detain citizens and when (business owners and workers who witness someone shoplifting or dining and dashing, for example.) But most states still have a version of these laws on the books, and as long as they endure, advocates say they could ultimately have tragic consequences.

Georgia’s citizen’s arrest statute had its origins in the Civil War era. Passed in 1863, when slavery was still considered legal by Southerners despite the Emancipation Proclamation, the law stated that a private person could “arrest an offender if the offense is committed in his presence or within his immediate knowledge.”

“It was a slave-catching law for slaves that attempted to flee,” Joe Margulies, an attorney and professor of law and government at Cornell Law School, told Vox. “It gave citizens the power to grab them. [The law] derives from a racist past.”

Every state has some version of a citizen’s arrest law, though they vary based on the type of crime and whether the citizen must witness the crime directly or just be aware that it happened. In many states, the laws are unclear about how long a citizen is permitted to detain someone, how much probable cause is necessary, and how much force can be used, said Ira P. Robbins, professor of law and justice at American University and the author of an article on citizen’s arrest laws for the Cornell Journal of Law and Public Policy. Many of the laws also don’t specify what it means to carry out a citizen’s arrest or to detain someone while making one.

The laws, according to Robbins, date back to medieval England, where citizens helped the king maintain order by enforcing the laws. The common law doctrine of citizen’s arrest was further developed in the early 19th century, and such statutes have remained on the books even as states laid out more modern systems of law enforcement.

In Alabama, for example, a private person can make a citizen’s arrest “where a felony has committed” — even if they didn’t witness it — and when they have “reasonable cause to believe that the person arrested committed it.” The law specifies that the arrest can be made “on any day and at any time,” outlines the steps that must be taken for a legal arrest, and gives citizens permission to break open doors or windows to capture the alleged offender.

California allows citizen’s arrests if the citizen witnesses a perpetrator committing a misdemeanor, or when a felony “has been in fact committed, and he has reasonable cause for believing the person arrested to have committed it,” according to the state’s penal code.

In New York, a citizen can arrest another person if they believe the suspect committed a felony such as murder, first-degree manslaughter, or rape. It also lays out the circumstances where deadly physical force may be justified: when the citizen believes it is necessary to defend themselves or a third person against physical force in the course of the crime. (They may not if they know that they “may avoid the necessity of so doing by retreating.”)

“I thought that the uproar over Arbery’s murder would lead other states to revisit their statues, but there has not been much [movement],” Margulies said. “It certainly has not prompted a wholesale reexamination of citizen’s arrest laws.”

Arbery’s killing isn’t the first involving Georgia’s citizen’s arrest law. In 2019, Kenneth Herring, a 62-year-old Black man, was killed by Hannah Payne, a 21-year-old white woman, after he left the scene of a car crash because he was experiencing a diabetic emergency. Payne pursued Herring in her vehicle and ordered him out of his car. It’s unclear what happened immediately after that, but Payne shot and killed him. She was indicted on charges of felony murder and malice murder, among others, and is still awaiting trial. Critics say she racially profiled Herring.

“Given what we know about implicit and explicit bias, allowing people to chase after someone and seize them based on what they believe was a felony is a recipe for some predictable number of cases just like this,” Margulies said. “With the automatic association between blackness and crime, seeing a Black man run by or drive away will lead to some predictable number of cases of folks concluding he’s committing a felony. That’s the real problem.”

In 2012, neighborhood watch volunteer George Zimmerman, a mixed-race Hispanic man, fatally shot 17-year-old Trayvon Martin in Florida after calling 911 and reporting “a suspicious person”; the police dispatcher instructed him not to approach Martin. Zimmerman, who was later acquitted of second-degree manslaughter, said he acted in self-defense.

“When you look at these cases, it’s about people trying to protect an area — not protecting it from a crime, but protecting it from certain types of people,’’ Rashawn Ray, a sociology professor at the University of Maryland and a senior fellow at the Brookings Institution, told Vox.

Citizen’s arrest laws can also go wrong in other ways — as in 2014, when a man in Virginia burst into a lecture hall at George Mason University Law School carrying handcuffs, pepper spray, and a Taser-like device in order to execute a citizen’s arrest of a professor whom he said had controlled his mind and sexually harassed him. In May 2020, a 22-year-old man in Arizona was shot and killed after he witnessed a hit-and-run and chased five people who ran from the scene in an attempt to detain them.

But in cases with a racial element, the laws are part of the pernicious way that “place, space, and race” intersect, Ray said.

Also factoring into the Arbery trial are Georgia’s open carry law (which makes it legal to openly carry firearms in the state with the proper permits) and “stand your ground” law (which allows for the use of deadly force if a person reasonably believes it is necessary to prevent death or severe bodily injury).

“We will likely hear from the defense attorneys a series of dog whistles about protecting people in that particular community from people who look like Ahmaud Arbery,” Ray said. “With laws like the castle doctrine, people will probably believe that good Samaritans have a right to also defend their neighbors’ property and that the McMichaels were coming to the defense of others. The defense will try to indicate to jurors that [a burglary] could have happened to them.”

The trial judge will instruct the jury on the citizen’s arrest law as it existed at the time of the killing, though Georgia has since repealed and replaced the law.

The protests surrounding Arbery’s death — which preceded those for Breonna Taylor and George Floyd, arguably setting the stage for what was to come in the summer of 2020 — and the nearly two years that have elapsed since then have not inspired a large movement to rethink citizen’s arrest laws.

In an effort to honor Arbery, New York lawmakers moved to revise the language in the state’s citizen’s arrest statute, calling the law a “dangerous and historically abused practice” that has been “used by racists to advance their bigoted goals.” The bill never advanced.

No matter the verdict, the Arbery trial could draw more attention to the anachronistic rules of citizen’s arrest laws.

“All of these citizen’s arrest cases with a racial element are on the same continuum,” said Ray, of the University of Maryland and Brookings Institution. “They end up in the exact same way. They end up with someone being killed.”