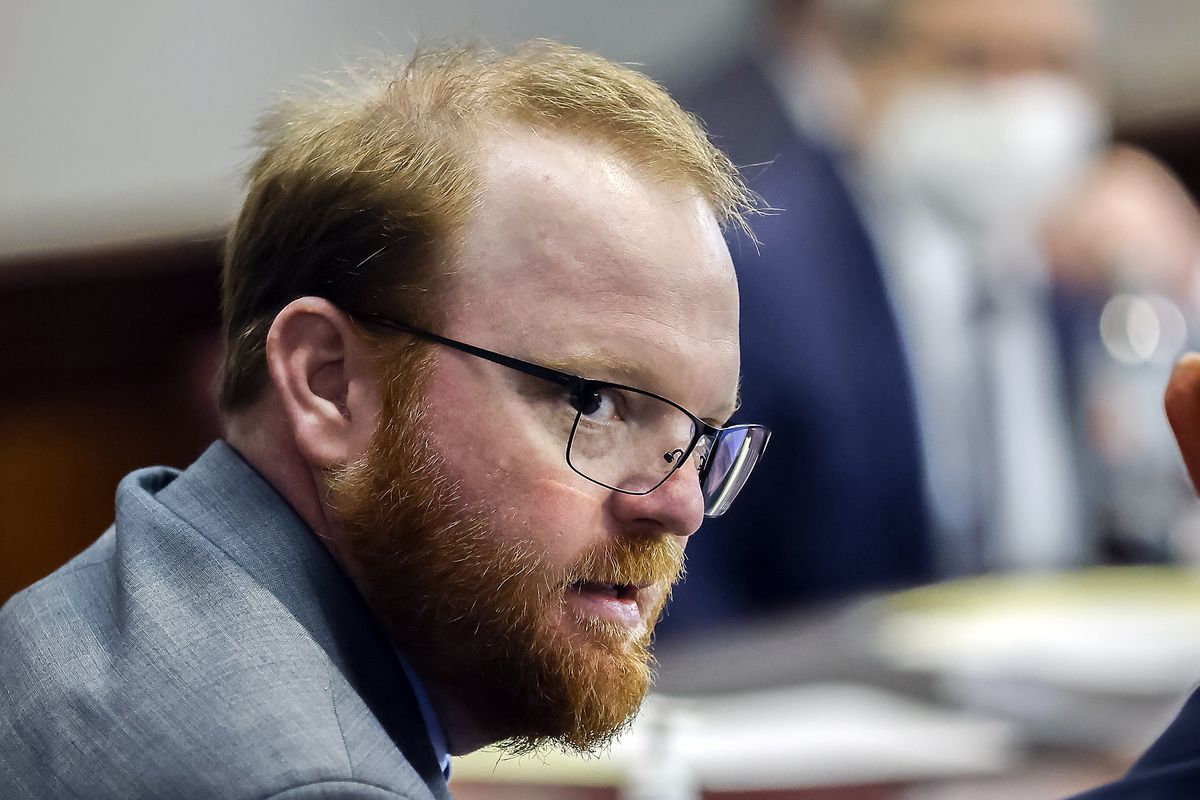 Twenty-five-year-old Ahmaud Arbery was Black, unarmed, and out for a run in a Georgia neighborhood near where he lived when three white men chased him down, and accosted, assaulted, and shot him dead nearly two years ago. Whether that all happened because the victim was Black, well, that’s something a lot of people feel they already know.

The effects of racism are often more visible than racist intent. Perhaps that is one reason the prosecutors dodged the topic of racial motives almost entirely in the state murder trial of Travis McMichael, now 36; his father, Gregory, 66; and William “Roddie” Bryan, 52 — the men who carried out what has been labeled a modern-day lynching in broad daylight. Each was convicted in November of an array of charges related to Arbery’s fatal shooting that day, including malice murder, felony murder, and false imprisonment. In January, all received life sentences in Georgia state prison, with the McMichaels having no chance at parole.

On Tuesday, a jury also convicted the men of hate crimes and other charges in a separate, second federal trial brought by the Department of Justice. Federal prosecutors argued that the men were driven to kill Arbery because of “a fatal dose of racial resentment and racial anger.” The jury — reportedly consisting of three Black people, eight white people, and one Hispanic person — agreed.

The conviction is significant for many reasons, in particular that it recognizes the role of race in the attack and killing of the unarmed young Black jogger and all but ensures the defendants will serve additional prison time. The prosecution and verdict also comes on the heels of Attorney General Merrick Garland’s recent efforts to combat hate crimes, which have spiked during the pandemic.

The difference between the Georgia murder trial and the federal hate crimes trial mattered, particularly since neither race nor racism was raised as a factor by the prosecution in the murder trial, save for a mention in district attorney Linda Dunikoski’s closing statement. Howard Law School professor Justin Hansford said that amounted to a “whitewashing of this trial,” telling Vox after the verdict that the tactic played to those afraid to talk about race.

The federal hate crimes charges made such avoidance impossible.

Federal hate crime prosecutions, for those victimized, can offer not only a promise of additional punishment for offenders but also an acknowledgment of the role bigotry played in a crime. That can be a powerful thing.

The defendants are also all pursuing appeals of the life sentences they received in their Georgia trial. (While many states have their own hate crime laws, Georgia did not have one at the time of Arbery’s death.) If they are successful, whatever federal sentences they will now receive would not be redundant.

The trial almost didn’t happen: Federal prosecutors initially thought they’d sealed a plea deal for two of the defendants, the McMichaels, to avoid having to try the hate crimes case at all.

The terms of the deal would have required both of the McMichaels to plead guilty to one charge of the government’s multi-count indictment: the part alleging that it was “because of Arbery’s race and color” that they interfered with Arbery’s right to enjoy the use of the public road on which he was jogging.

Then, late last month, US District Court Judge Lisa Godbey Wood took the rare step of refusing the plea deal struck by the US Department of Justice. Because that proposed deal collapsed, so did their admissions of guilt.

According to the Associated Press, Wood rejected the government’s plea deal because it locked her into adding 30 years of prison time (atop the McMichaels’ existing life-without-parole sentences), and she felt that Arbery’s family should have a say at the sentencing.

Arbery’s family, who had previously objected to any plea deal being struck, disagreed with a provision allowing Travis McMichael to transfer immediately from state prison to federal custody — where, they argued, conditions wouldn’t be as tough for him or his father, were he to join him. “Please listen to me,” Wanda Cooper-Jones, who is Arbery’s mother, told the judge, per AP. “Granting these men their preferred choice of confinement would defeat me. It gives them one last chance to spit in my face.”

The two-week federal trial did shine a light on race. Federal prosecutors presented reams of evidence, including racist text messages and social media posts, in their attempts to show that racism was a motivating factor for the men when they chased down Arbery and shot him. One text sent by Travis McMichael months before Arbery’s killing stated, “We used to walk around committing hate crimes all day.”

That hate crime prosecutions are uncommon, and became even rarer during the Trump administration, matters.

However, 85 percent of defendants convicted of a hate crime were sentenced to prison, with an average term of more than 7.5 years.

Convicted in their federal trial, Bryan and the McMichaels are likely looking at considerably more time than 7.5 years; it could explain their willingness earlier to plead guilty to committing crimes against Arbery because he was Black in exchange for 30 years’ imprisonment.

The federal conviction of the McMichaels and Bryan may seem like a strong indicator of the viability of hate crime laws to administer criminal punishment and accountability. It sounds like a reason to argue that the system works.

Scott Hechinger, a former public defender, had a different perspective. “To me, the trials underscore how ill-equipped the criminal legal system, process, and punishment is to achieve accountability and healing,” said Hechinger, who is now the executive director of Zealous, a national advocacy and education initiative that uses media and the arts to combat systemic injustice. “Ahmaud Arbery’s killers were sentenced to life without the possibility of ever being released. Sentenced to death in prison. Yet still, his killers remain unrepentant and indignant. Meanwhile, even worse: Arbery’s family remains unwhole, unhealed, traumatized.

“I hope that this second trial, which may result in a verdict that their crimes were actually motivated by racial animus, brings some closure to the family,” Hechinger said before the trial began this month. “I fear that it won’t. I fear that the worst possible outcome may be new expansion and harsher application of federal criminal laws and sentences that we know from experience, always disproportionately get enforced against Black and brown people and people of lower socioeconomic statuses.”

A guilty verdict and additional prison time may help give the Arbery family some peace, and that is significant. The more central question of this federal trial, amid continuing debates about the effectiveness of hate crime laws, is whether such laws have a deterring effect on racist violence. (Research suggests they don’t.)

What is a hate crime prosecution supposed to prove? And who is it even protecting?

Bryan Adamson, a professor of the First Amendment and civil rights at the Case Western Reserve University School of Law, noted that a second trial can be necessary when the deprivation of someone’s civil rights results in death. The men in this case were convicted of hate crimes charges as well as kidnapping charges; the McMichaels also faced and were convicted on charges of using a firearm in the crime.

Adamson told Vox that federal prosecutors had a much different hill to climb than their counterparts in the state’s trial. However, the burden of proof is, in a sense, was also on the defense this time around.

“Prosecutors are going to have to demonstrate, by direct or by circumstantial evidence, that the defendants were motivated by the race of Ahmaud. That brings in some nuances and issues regarding proving motivation, which can be a challenge,” Adamson said before the trial began. “The prosecution has to put it front and center, but the defense then has to attempt to present a case that shows that there was anything else but race that motivated them to do what they did.”

Bryan and the McMichaels claimed in state court that they were attempting a citizen’s arrest for a series of alleged burglaries for which they suspected Arbery, though they had no evidence. They argued their encounter was legal based on a Georgia code, since repealed, that dated back to 1863 — a law that “was basically a catching-fleeing-slave law,” Cornell University criminal law expert Joseph Margulies told NPR in October. Even the excuse that the men hoped would absolve them was stained by racism.

Adamson believed before trial that the defendants may try recycling elements of that failed criminal defense: They have argued that they were concerned about the crime in their neighborhood and the safety of property in the area. Many of the defense’s efforts leading up to the hate crimes trial were directed toward keeping evidence out of the case — including testimony from Bryan that Travis McMichael uttered a racial slur after fatally shooting Arbery, as well as racially offensive texts allegedly sent from Bryan’s phone. The texts ultimately were presented to the jury.

Update, February 22, 2022: This story has been updated to reflect the February 22 conviction of the defendants on federal hate crimes charges.