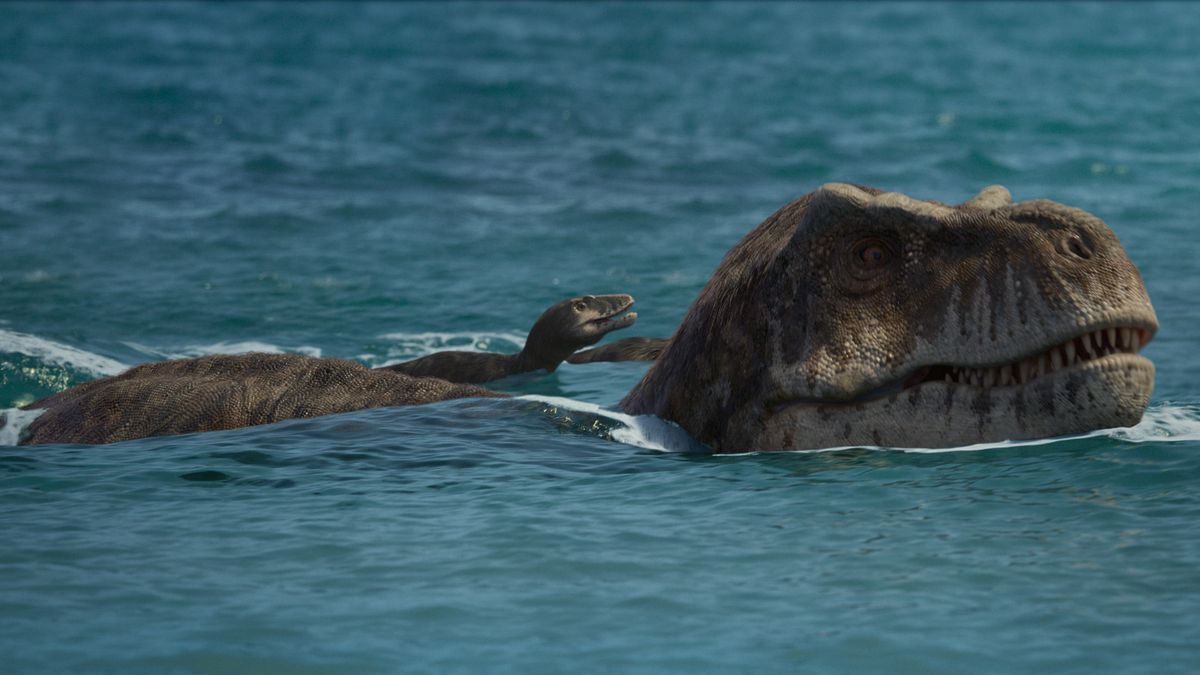 From the moment the first Tyrannosaurus swam onto the screen in Prehistoric Planet I was a lost cause — I giggled in delight. My thoughts instantly devolved from “I’m a science editor taking a serious look at this nature show” to “Holy crap, that’s a dinosaur.”

Prehistoric Planet is Apple’s attempt at answering the question: what if we made Planet Earth but 66 million years ago? The result is shockingly good-looking, especially since the producers have not, in fact, managed to invent time travel, nor have they pulled a Jurassic Park and brought dinosaurs back to life.

It’s a whole lot of movie magic that makes the five-episode series actually seem like a nature documentary, even though its main subjects haven’t been swimming the seas, soaring the skies, or stalking through forests since the end of the Cretaceous period. It’s not perfect — some heads looked animatronic, and some of the herds had a decidedly animated feel. But those few visual misses were drowned out by the film’s meticulous attention to detail. Snowflakes falling off a Nanuqsaurus after a blizzard or dappled sunlight hitting the cobalt feathers of a Corythoraptor in a forest make the dinosaurs seem real, even if every movement, every shadow, is engineered. This kind of leap forward in dino-realism was last achieved 29 years ago when the first Jurassic Park movie came out.

Since that’s the second mention of the movie, it’s time we talk about the titanosaur in the room. At the time it premiered, Jurassic Park was remarkable. It portrayed dinosaurs as science at the time understood them and inspired a generation of paleontologists. That generation has now been part of a massive wave of discoveries made in the decades since. So many discoveries, in fact, that some of the science represented in the original movie is now out of date — something that the many sequels have wrestled with. We’re now living in what’s often termed “the golden age of paleontology” — especially for dinosaurs. We now know so much more about how dinosaurs behaved, what they looked like, and where they lived than we did 29 years ago.

So, for a paleontology nerd, it is deeply exciting to see some of the fossil discoveries of the past few decades play out on the screen — not just dinosaurs with feathers but also nesting behaviors, fights between species, and even how their digestive systems worked. There is absolutely no doubt that we’ll see plenty of discussion from the paleontology community about the series, including what parts were speculation, which parts were probably right, and what people disagree with the most, and some of that discussion has already been going on behind the scenes.

Each scene for Prehistoric Planet involved a vast amount of research and discussion about and comparisons with animals that we see today. “Everything that we show is plausible with the latest science,” Jon Favreau, an executive producer on the show, said in a press conference, noting how different that was “from Hollywood, where you could kind of make up anything and put anything on the screen.”

Even with libraries of background research, there were some questions that the team’s scientific consultant paleontologist Darren Naish couldn’t answer with journal papers alone. But the film often ended up finding an answer nonetheless.

Take one of the plesiosaur scenes. “We have to decide whether we show plesiosaur paddles as stiff when they flap them or whether there was a bend, you know, whether they were a bit floppy,” Naish said in an interview with The Verge. “We went with the floppy one, because that was what the animators explained would work best.” That choice turned out to be a good one. The animators had noticed that the biomechanics made the most sense with the “floppy” option, and a subsequent paper from researchers showed that that interpretation was probably correct, Naish said.

The depth of research is also reflected in the sheer variety of ancient creatures on display. There are popular favorites, like the T. rex with his pack of T. rex juniors. And velociraptors are here in full-feathered glory — clever girl. But there’s also Ornithomimus, the thieving nest-building dinosaurs that look like punk rock ostriches with dark mohawks and bright red sleeves. Or Barbaridactylus, a pterosaur that has a ridiculous giant antler on its head. Or Beelzebufo, a giant frog that will absolutely haunt my dreams. And charismatic megafauna aren’t the only ones to make the cut. Other organisms, including fungi, ammonites, and ancient plants all show up as supporting characters.

That’s fitting because, at its heart, this is still a nature documentary complete with the king of all natural history narrators: David Attenborough. Even though it doesn’t have all of the same creatures we see today (crabs and dragonflies do make cameos) the series has the same beats and stories that you’ll find in any Attenborough documentary — they just started in the fossil record and not in a field shoot. There are battles to the death, funny mating rituals, and cute young dinosaurs just trying to get by in a cruel world.

(Fair warning to any other new parents out there: the scenes with young dinosaurs in peril definitely hit harder than they ever did in my pre-kid days. I may have yelled, “Don’t you dare hurt that baby, David Attenborough!” more than once across the five-episode arc. Hormones are a thing.)

What’s really remarkable in watching the series is how it drives home just how much things haven’t changed in 66 million years. Sure, the continents have shifted, and different lifeforms have overtaken the planet, but the same forces are still at work. The seasons are still turning, lifeforms still have to contend with wild events like storms, wildfires, and even mosquitoes. Against these familiar backdrops, the dinosaurs feel just as alive as any bird or rhino or tiger that we’d see today — even though all that’s left of them are a few fossilized remnants. Turns out that with the right filmmaking tech and enough research, life, uh, finds a way.

“Prehistoric Planet” premieres on Monday, May 23 on Apple TV. The five episodes will be released daily throughout the week.