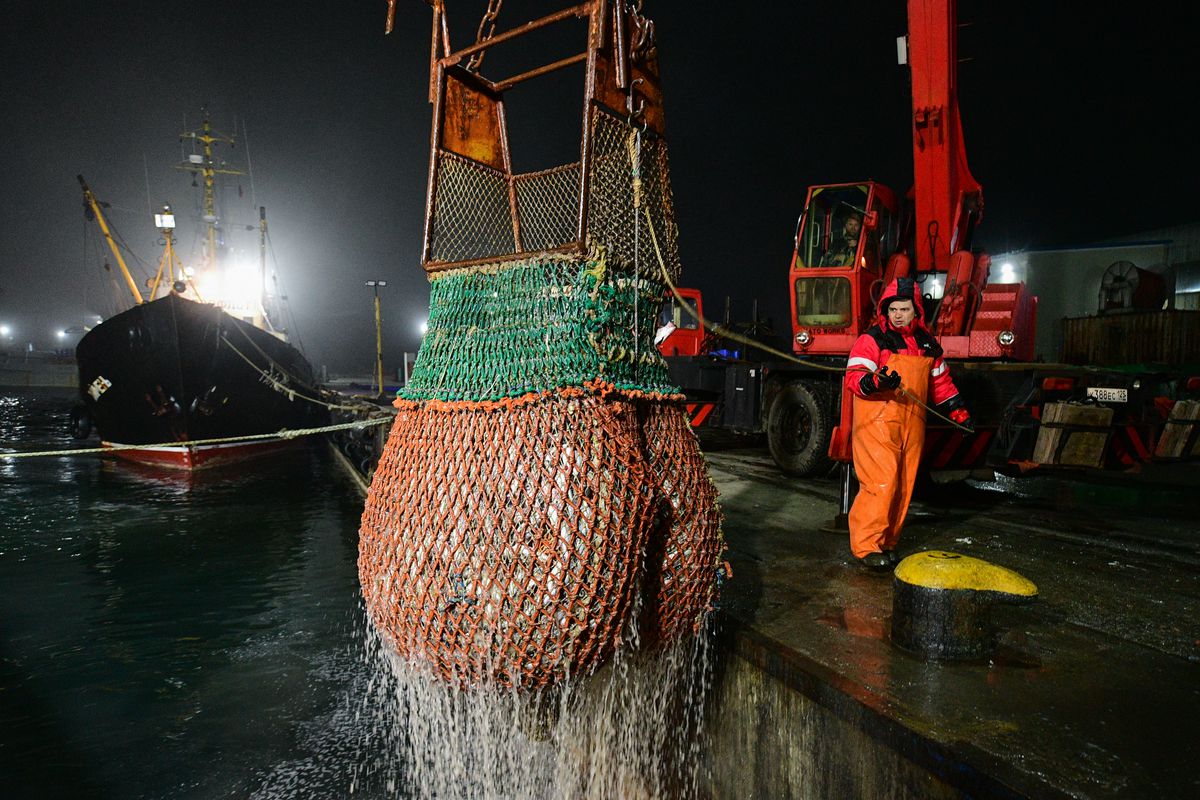 Daniele Bianchi, a researcher at the University of California Los Angeles, has a message for climate scientists everywhere: Pay more attention to fish poop.

Fish and their feces play a hugely important and vastly underrated role in ocean chemistry and the carbon cycle that shapes Earth’s climate, according to a new study led by Bianchi and published in the journal Science Advances.

The story goes something like this: Tiny marine organisms called phytoplankton absorb carbon from the water and air around them. As the plankton are eaten by increasingly larger creatures, the carbon then travels up the food chain and into fish. Those fish then release a lot of it back into the ocean through their poop, much of which sinks to the seafloor and can store away carbon for centuries. The scientific term for carbon storage is sequestration.

“We think this is one of the most effective carbon-sequestration mechanisms in the ocean,” Bianchi told Vox. “It reaches the deep layers, where carbon is sequestered for hundreds or thousands of years.”

Carbon that’s stored in the deep sea is carbon that’s not making the oceans more acidic or trapping heat in the atmosphere. In other words, fish poop could be a bulwark against climate change.

The problem is that commercial fishing has sliced the global fish population to a fraction of its former level. As scientists figure out the importance of fish poop, they’re also recognizing a new danger of large-scale fishing. Beyond putting ecosystems at risk, the industry is messing with big nutrient cycles — and perhaps eating into an important carbon sink.

About a quarter of the carbon dioxide spewing from cars, factories, and farms ends up in the ocean each year, making it one of the world’s largest carbon sinks. Much of that carbon is sucked up by phytoplankton, which is then eaten by other marine organisms, which are then eaten by fish. It’s Food Chain 101.

What Bianchi and his co-authors wanted to know was how much of that phytoplankton (and the carbon it contains) ends up in fish, and where it goes from there. The researchers focused their analysis on the ocean before industrial fishing began in the 19th century, and during a period of “peak catch,” around the turn of the 20th century. Peak catch, Bianchi notes, led to over-fished oceans of the sort we recognize today.

The team had reliable data for commercial fish, like tuna and cod, which have been widely studied by the fishing industry. According to their analysis, these fish alone took up about 940 million metric tons of carbon per year, or 2 percent of all biomass produced by plankton, before preindustrial fishing. “Two percent might look like a small number, but it is, in fact, massive,” Bianchi said. For comparison, the UK emitted 326 million metric tons of carbon dioxide last year.

That 940 million number increases to 1.9 billion metric tons of carbon per year, or 4 percent of the total phytoplankton biomass, when the authors estimated the impact of all fish, not just ones harvested by the fishing industry.

Meanwhile, during the period of peak catch — when there were about half as many fish in the ocean as before the Industrial Revolution — fish populations digested a much smaller portion of the world’s carbon. The species that are fished commercially took up about 1 percent of the total phytoplankton biomass, Bianchi said.

That’s similar to what happens in the oceans today, he explained: Fish are taking in about half as much biomass and carbon as they once did, simply because there are far fewer of them.

When fish deposit carbon on the bottom of the ocean, there’s less left over to warm the planet.

That’s where poop comes in. Roughly a fifth of the biomass that fish consume “returns to the environment as fecal pellets,” the authors write. Because these pellets are relatively large and compact, compared to the excrement of smaller organisms, they sink quickly into the deep ocean. That’s key to long-term storage.

“When thinking about carbon sequestration, a really important metric is how deep the carbon gets in the ocean,” Sasha Kramer, a researcher at the University of California Santa Barbara who was not involved in the study, told Vox. “Deeper particles are sequestered on longer time scales.”

According to Bianchi, commercial fish sequester about 10 percent of the carbon in the deep ocean, and it stays locked up for 600 years or so — meaning, fish poop makes up a sizable cache of carbon.

Fish can also sequester carbon when they die and sink to the ocean floor, according to another recent study in Science Advances. A single fish is roughly 12.5 percent carbon, Gaël Mariani, the study’s lead author, told Vox. That carbon can get locked up in the deep ocean, assuming the fish carcasses stay there.

By contrast, when fish are harvested, the carbon they contain is partially emitted back into the atmosphere a few days or weeks later, according to the study. That means a big fishing operation can release a lot of carbon that might otherwise be stored. According to estimates from the paper, fishing fleets harvested about 320 million metric tons of large fish — such as shark and mackerel — between 1950 and 2014, which “prevented” about 22 million tons of carbon from being sequestered.

“We have to think about the interaction between fisheries management and carbon management,” said William Cheung, a professor at the University of British Columbia and a co-author of the sinking-fish study. “When we manage our fisheries and set targets, we should also think about how that will affect the capacity of the ocean to store carbon.”

The impact of fish and their feces goes beyond just carbon. For example, falling pellets provide food to some creatures in the deep sea, which use up oxygen as they chow down. That affects how much oxygen is available in these dim depths, the authors say, some of which are already oxygen-starved. Climate change stands to mess with the delicate balance of oxygen in the deep sea as well, Kramer said.

Fish are not the only marine creatures shaping ocean chemistry. One study from 2010, for example, suggests that the feces of baleen whales is rich in iron, which can seed blooms of phytoplankton in the Southern Ocean. That, in turn, helps draw down carbon.

If populations of baleen whales recover in the Southern Ocean, it might cause populations of some marine organisms in those waters to balloon, the authors write. “This food chain serves to keep more iron in the surface waters where it is useful to phytoplankton, so [it] sustains productivity,” Stephen Nicol, a researcher at the University of Tasmania and the study’s lead author, told Vox.

Just as humans have industrialized farming with large, AI-powered tractors and sprawling monocultures, we’ve also figured out how to harvest massive quantities of fish with large nets, trawls, and dredges. In one year, fishing boats can capture over 80 million tons of seafood. Today, more than half of the oceans are covered by industrial fishing runs, research has found, and as of 2017, a third of the world’s marine fish stocks were overexploited.

The problems of overfishing go beyond the damage to important species like sharks and rays and charismatic, endangered species like the vaquita porpoise. Researchers like Bianchi are showing that they also extend to the climate.

By contrasting today’s depleted oceans with a theoretical “unfished” ocean, Bianchi and his co-authors are showing what kinds of benefits a fully stocked ocean provides.

“The authors are hypothesizing that an ocean without fishing would potentially have combatted some of the impacts of anthropogenic climate change,” Kramer said. If the ocean wasn’t so overfished, the authors imply that “much more of that carbon would have been taken up,” she said.

That’s to say nothing of the carbon that bottom-trawling dredges up, or the greenhouse gases emitted by shipping vessels. In 2016, for example, industrial fishing vessels released about 159 million metric tons of CO2 emissions, one study estimates. That’s roughly equivalent to the emissions of the Netherlands last year.

Putting an end to industrial fishing wouldn’t be easy. Seafood provides protein to some 3 billion people worldwide and supports some 60 million jobs. And as marine biologist Daniel Pauly argued in response to Netflix’s controversial Seaspiracy documentary, giving up seafood altogether isn’t feasible either. “This is a position that only a small fraction of the population of wealthier countries will take,” he writes.

But there are plenty of ways the industry can improve, and gaining a better understanding of how it impacts the Earth’s climate should be part of that change. What Bianchi hopes others take away from the sinking-poop study is that fish are essential to the chemistry of our oceans. “We have altered their biomass,” he said, “and that has consequences.”