The Complexity Of Competency Mapping

Competency mapping exercises can be challenging for organizations. “Why?” one may wonder since people are equipped with competencies to perform their tasks efficiently and make organizations successful. Have competencies become too complex to decipher? Or, has the exercise itself become too difficult for organizations because knowledge, skills, and attributes/abilities (KSAs) are too vast to categorize without wasting too much time? This article will delve deeper into the complexities of competency mapping and illustrate with an example the various stages of the process.

We were invited to perform a competency mapping exercise by a vehicle manufacturing company. The intent was to map competencies to job roles, identify skill gaps, and suggest individual development plans (IDPs) wherever gaps were causing performance issues. For the pilot, we had to focus only on one department. We were given a month to complete the assignment.

This did not seem like an impossible agenda, as it was a simple and straightforward task. A couple of days into the task, we realized that things were not as simple as they seemed. Each department was divided into several subunits. Each subunit had several job roles and each role had several associated skill sets.

Past attempts to group skills and assess skill gaps had failed because competencies had become complex clusters that were deeply entwined and difficult to segregate. For example, engineers in the testing unit had the primary responsibility of testing an engine, for which multiple skills were needed. They also had several secondary and tertiary tasks to perform that called for a different set of KSAs. Apart from functional skills, there were also several behavioral skill requirements for their job roles.

With such complex skill clusters in each subunit of the department, we realized we were looking at a skilled web that would take a long time to untangle, categorize, and map. To accomplish this, we decided to follow a series of steps.

Though stakeholders at the top management level were driving this exercise, we realized during our initial interactions that those at the middle and lower management levels did not have an accurate understanding of what the competency mapping exercise meant.

There was a tacit assumption among team leads and managers that the tasks performed by their team members were synonymous with competencies. The concept of “competency” was not familiar to them and if a person could perform tasks, they were considered “competent.” Typically, many don’t want to know beyond this and wonder why it is necessary to know more, as a person performing tasks and people managing tasks are aligned on the expectations.

We strived to explain what competency means with the example of a cook’s job role. A cook needs knowledge of different cuisines, insight into audience preferences, expertise in blending ingredients for the perfect taste, aesthetic presentation skills, and so on. Together these skills define the competency of a cook. The tasks of a cook, such as preparing dishes, do not translate to the competency of “cooking.” On the contrary, the competency of a cook determines how well they perform tasks. So, based on the level of proficiency in these competencies, a cook can be termed mediocre, excellent, or any other level.

This simple example was relatable to all and we had achieved our first objective of helping our stakeholders understand the importance of defining competencies. We then proceeded to provide the following definition of competency and competency mapping: The knowledge, skills, attributes (KSAs), and behavior needed to perform tasks successfully or efficiently is defined as competency. So, a person is termed “competent” when they perform their job tasks at their efficient best.

Competency mapping is the process of identifying the KSAs and behavior needed to perform a specific job role.

Emphasizing The Benefits Of Competency Mapping

We also highlighted the following benefits of competency mapping so that we had the complete “buy-in” of the middle and lower-level management stakeholders because the exercise can consume their time, as well as their team’s. Without seeing the goal, we realized they would not be fully invested in the process and unless that happened, our efforts would not succeed.

We explained that competency mapping is critical for:

Identifying The Department And Hierarchy

Our next task was to identify which department we should choose for the pilot and who would be our target audience. Discussions with the top management helped us understand that the engine department would be ideal for the pilot project, as it was facing several challenges including attrition and performance issues. Since most of the issues were being faced at junior levels, we decided to focus on the engineers up to the assistant manager level.

Our most crucial task now began, which was to analyze job roles and identify related KSAs and behaviors.

We kicked off with the tried-and-tested method of collecting job descriptions and specifications. Here is a brief description of what these terms imply:

We continued to perform the next steps in the process. First, we met the team leads, who were able to provide job descriptions that they typically used for hiring various roles in their team. Apart from this, they did not have any documented skill list.

We then met the managers of each subunit. They were additionally able to give us some Excel sheets that had a brief description of the tasks that their team members performed. This gave us a summary of job specifications.

Often, competency maps are mixed up with job descriptions and specifications. We found this happening here too. We had to help our stakeholders understand the following differences so that we could enlist their help to identify KSAs for job roles.

Having provided a better understanding of the importance of competency mapping, we proceeded to work with stakeholders to identify skills for job roles in the engine department. Job descriptions and specifications were a good starting point to arrive at the KSAs for every role.

We had detailed interviews with team leads and managers, which helped us consolidate skill lists and fill some of the gaps. For example, some key technical skills, such as knowledge of CAD design, were stated in job descriptions. But tertiary skills, such as emission testing ability, were missing. Some behavioral skills were also missing from job descriptions.

We felt it was necessary to observe the tasks of some sample audience of each role for some time and also interact with them. The intent was to understand if the KSAs we had identified earlier mapped to real-time tasks being performed. During the job shadowing exercise, we found that, indeed, there were some changes that needed to be made to KSAs, as some skills had become redundant for certain roles, and for others, there were new skills that had become necessary. We were able to tweak KSAs and map them more accurately to tasks and corresponding roles.

We also analyzed all hiring and exit data in the organization to understand the typical skill requirements vs gaps. This gave further insight into the kind of skills that existed in the organization versus what was essential for success in a specific job role. We then met the top-level management stakeholders, discussed the skill list we had gathered, and enlisted their help to validate data. Through step-by-step data analysis, we were able to derive a comprehensive skill list related to different job families in the engine department.

Having prepared a list of skills for job roles in the engine department, we went on mapping skills to competencies required for each job role. Here is an example of a list of functional competencies for a junior-level engineer in this department:

Following were some of the behavioral competencies we identified: 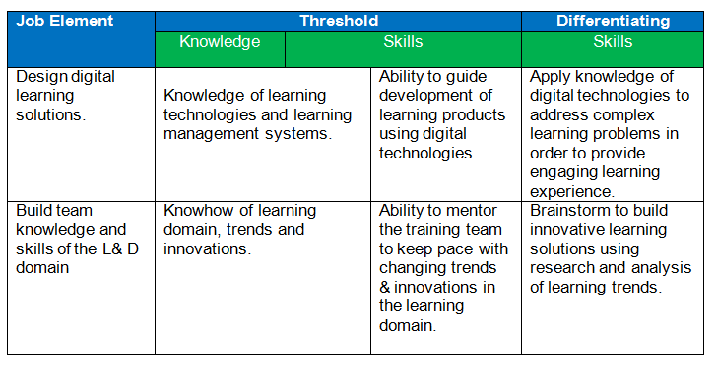 For the next step, it was important to create a framework for rating competencies. We used the tried-and-tested Behaviorally Anchored Rating Scales (BARS) to define proficiency levels. Typically, BARS are presented as a scale with several points to indicate skill progression required for specific competencies. While creating the BARS scales, it is important to provide a clear definition of competencies at each level. By including specific markers of competencies along with numerical ratings, BARS can be less subjective. Here is an example of the BARS scale we created for competencies in the engine department:

With all skills we had gathered, we created a comprehensive competency dictionary with BARS scale ratings.

Employees can be assessed for their competency levels through a combination of various techniques. Here are some that we used:

While hiring new employees, however, we recommended the following 3 techniques, apart from interviews which are mandatory:

1. Assessment-Centered Exercises Including The Following

In assessment centers, employees needed to be assessed are required to perform the above activities in a simulated environment. Their skills, especially behavioral skills, are observed and evaluated.

It is a method in which an interviewee is asked to recall and describe a time when an incident positively or negatively impacted a specified outcome.

As described earlier, psychometric tests are the most tried-and-tested method to assess both functional and behavioral skills.

The above techniques call for a separate discussion and are not in the scope of this article.

We signed off the engagement by submitting a detailed report of our findings. We also created an individual development plan (IDP) for employees for those aspects of skills that could be improved through training, job shadowing, and other interventions required for skill enhancement.