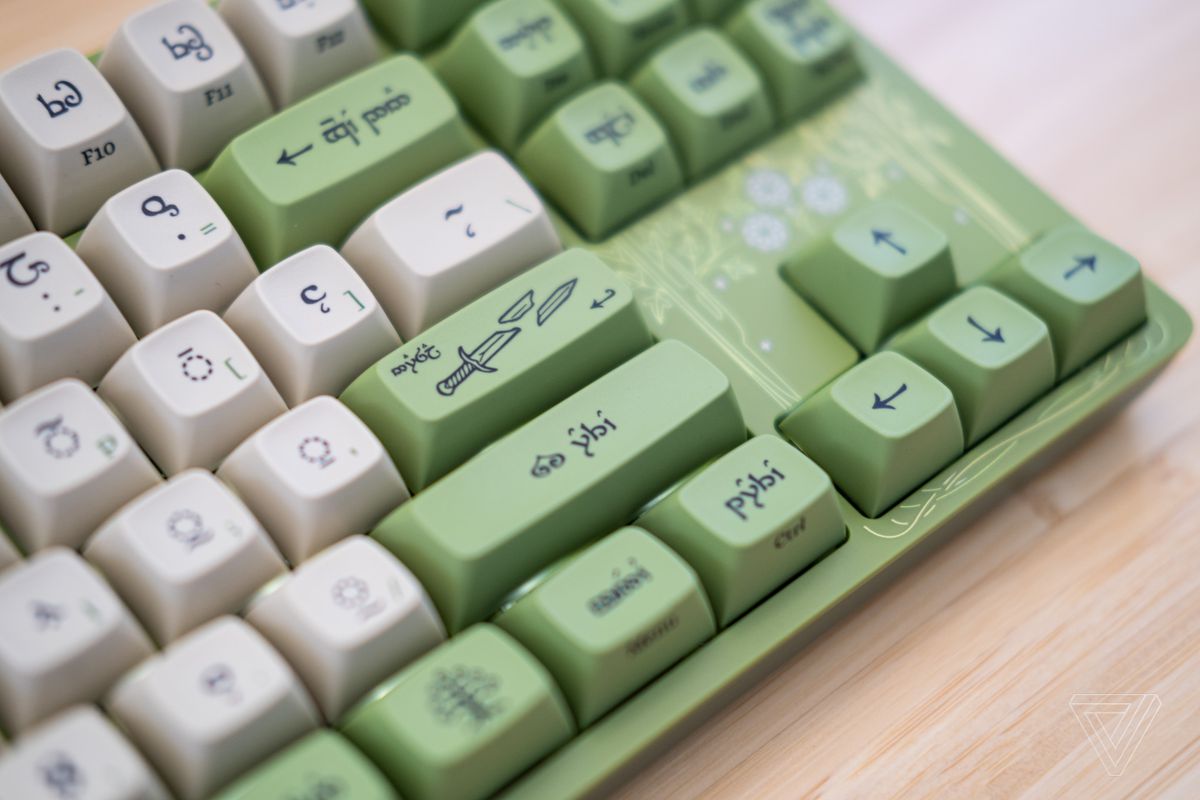 A little under a year after Drop released a pair of keycap sets themed around the Elvish and Dwarvish languages from J.R.R. Tolkien’s The Lord of the Rings, the mechanical keyboard retailer is following it up with two full-on keyboards. There’s a gray Dwarvish board and a green Elvish counterpart, both of which are available fully assembled and ready to go out of the box. Both retail for $169, with preorders opening today, and Drop hopes to ship both by early October. I’ve been testing out the Elvish version over the last couple of days.

Aside from the keycaps themselves, which feature regular Latin characters alongside their fantasy equivalents, both keyboards also include small Tolkien-esque illustrations above their arrow clusters. But I like the fact that there are no visible logos or obnoxious Lord of the Rings branding. Instead, there are a simple pair of wordmarks visible on the underside of the keyboard (next to a pair of flip-out feet for height adjustment) but nothing you’re going to see during regular use.

The keycaps themselves use the so-called “Training” designs, which explains the presence of traditional Latin legends. That means you won’t have to literally learn Dwarvish or Elvish to use these keyboards, but the bad news is that the fantasy symbols replace the secondary legends most keyboards use. So it’s easy enough to tell the “4” key from the “3” key, but I sometimes forgot which I needed for “#” and which was “$.”

As well as the lettering, the keycaps also include a couple of illustrations on some of the larger keys. On the Elvish model, this includes an Eye of Sauron on the escape key, the broken sword Narsil on the enter key, and a small Ring of Power in place of the left Windows Key. In the box with the keyboard, you also get a couple of extra complimentary brown keycaps, including a spacebar with Elvish lettering (it’s the inscription from the One Ring, in case you were wondering).

Incidentally, the designer of the keycaps, Matt3o, outlined what the lettering on the other keys translates to in a blog post last year. Here are a couple of highlights:

The keycaps are nicely made overall. They use the MT3 profile (in other words: their shape) that Matt3o developed and which Drop now sells in a variety of different color schemes. MT3 has a tall retro look, with sculpted keycaps that nicely match the contours of your fingers as you type.

My one personal gripe with the design is that there are no raised notches on the F and J keys to help your index fingers find them without having to look. Instead, the idea is that they’re slightly more concave than the keys around them to help your fingers feel them out. The design works overall, but in my few days of use, I found myself making more of a conscious effort to feel out the keys than on keyboards with little notches. That might change over a longer period of use, however.

Underneath the keycaps, the keyboard itself is similar to the ENTR model that Drop has been selling for years. But the company has included a couple of upgrades to justify the price premium of the Lord of the Rings model. For starters, the new special edition keyboards come equipped with Holy Panda X switches, while ENTR keyboards are typically only sold with linear Gateron Yellow or tactile Halo True switches. Holy Pandas are seen as a more premium switch that are weighty yet smooth, with a big tactile bump. They generally give typing on the keyboard a chunky feel. However, the keyboard itself isn’t hot-swappable, so you’ll have to get out a soldering iron if you ever want to replace the switches at a later date. That’s a feature that’s increasingly available on more affordable keyboards like Keychron’s Q1.

Oh, and in case it wasn’t obvious from these images, the keyboard is wired-only rather than wireless. You get a somewhat basic white detachable USB-C cable in the box with the Elvish model, and Drop’s press imagery suggests the cable is black on the Dwarvish model.

Their LOTR-themed designs won’t be for everyone, but the premium components found in Drop’s latest keyboards mean they avoid feeling like a cheap attempt to cash in on the Lord of the Rings franchise ahead of the premiere of Amazon’s new TV show next month. Both the Dwarven and Elvish versions of the keyboard are available to preorder now over on Drop.

Photography by Jon Porter / The Verge