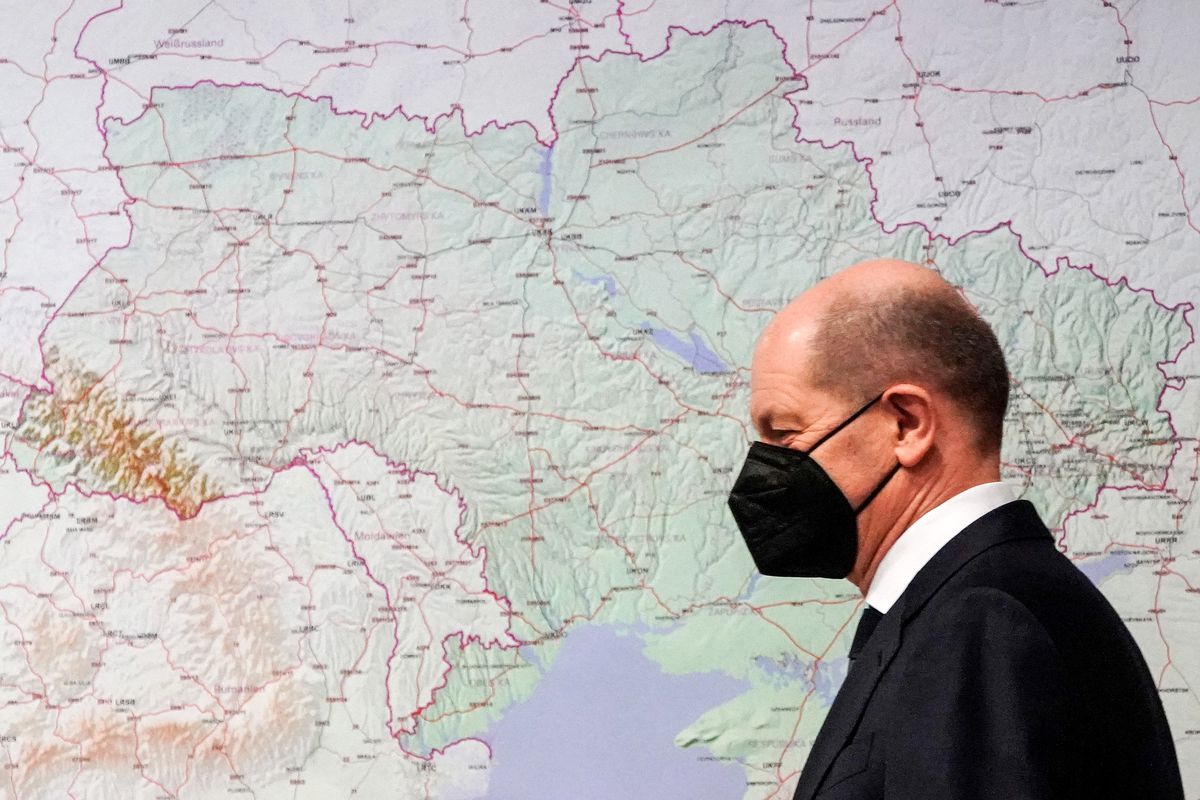 In January, as Russia’s military buildup threatened Ukraine, the German government declined to support Kyiv with lethal aid. Instead, it sent Kyiv 5,000 helmets and a $5 million field hospital. It also blocked other NATO countries from sending German-made weapons to Ukraine. “Germany has not supported the export of lethal weapons in recent years,” Chancellor Olaf Scholz told reporters at the time.

The Russian invasion of Ukraine, Scholz said in a Saturday statement, was a “turning point.”

A day later, Scholz showed exactly how dramatic this turning point would be. In just one speech to the Bundestag, Germany’s parliament, Scholz undid decades of German foreign and defense policy. Most strikingly, Scholz proposed massive investments in Germany’s defense and security, reversing the country’s reluctance to build up its military. It’s a seismic shift not just for the country, but potentially for Europe and the trans-Atlantic relationship.

“It’s really revolutionary,” said Sophia Besch, a Berlin-based senior research fellow at the Centre for European Reform. “Scholz, in his speech, did away with and overturned so many of what we thought were certainties of German defense policy. He ticked off just one taboo after the next.”

Scholz said Germany would need to invest much more in its security, “in order to protect our freedom and our democracy.” He introduced a €100 billion ($113 billion) special fund for investments in the Bundeswehr, Germany’s armed forces. He committed Germany to spending more than 2 percent of its GDP on defense — a target all NATO member countries agreed to meet, but one that less than half actually do. Germany spent a total of about €47 billion on defense in 2021. And, if that wasn’t enough, Scholz also said Germany would seek to guarantee a more secure energy supply — as in, away from dependence on Russia and its natural gas, a little more than a week after he paused approval on the Nord Stream 2 pipeline.

Scholz called Putin’s war a “Zeitenwende” — a turning point, or “watershed moment.” But as German speakers tried to explain, it’s larger than that. It’s akin to the dawning of a new era.

“It’s a very disorienting moment,” said Tyson Barker, head of the technology and global affairs program at the German Council on Foreign Relations. “But, at the same time, the public and the political class are all on board.”

Scholz’s announcement was reportedly a surprise even within his own governing coalition, but he received applause and a standing ovation in the Bundestag when he made these defense commitments.

Russian President Vladimir Putin’s Ukraine invasion entirely upended Germany’s views of Russia, and of security, both its own and Europe’s. It is unprecedented, but this is also an unprecedented time — war and a refugee crisis in Europe that is unraveling the post-Cold War order.

“The images of democracy being thwarted, of a sovereign country being invaded, that’s what it took to wake Germany up,” said Rachel Rizzo, nonresident senior fellow at the Atlantic Council’s Europe Center. “The question now is: how long does it stay?”

The German government hasn’t officially confirmed the reports, and Der Spiegel reported that hundreds were in moldy boxes and basically unusable, but it seemed to symbolize — in a very on-the-nose way — how quickly Germany is trying to shed old norms.

Similarly unthinkable before last week was Scholz’s other major U-turn: the freezing of Nord Stream 2, a natural gas pipeline between Russia and Germany agreed to after Russia’s 2014 annexation of Crimea. Scholz, as previous governments had, initially defended the project as solely an economic one, despite long-standing pressure from allies that Berlin nix it. Germany did say Nord Stream 2’s future was on the table if Russia invaded, but they didn’t commit — that is, until Russia deployed troops for so-called “peacekeeping” operations in eastern Ukraine, and Scholz, just like that, paused the project’s approval process.

It shows just how much Russia’s invasion crushed long-held tenets, not just of Germany’s foreign policy, but possibly of how the country sees itself.

During the Cold War, starting in the late 1960s, West Germany pursued a policy of “Ostpolitik” — basically, Eastern policy — that sought to normalize relations with the Soviet Union. Those imprints have continued to the modern day, with Germany seeing itself as something of a bridge between Western allies and Moscow, trying to balance its commitments to partners while also trying to maintain good relations with Russia. That meant favoring diplomacy, trying to engage with Russia on multiple fronts, cultivating economic ties between the two countries like Nord Stream 2, and putting faith in these tools as the off-ramp to any conflict.

Germany was “really guided by this idea that European security could only be achieved with Russia,” Besch said. “And in his speech, Scholz has now called out Putin’s action, Putin’s Russia, as a threat to the European security order.”

What makes Germany’s policy shift such a big deal is the widespread political and public backing for it.

More than just pragmatism, Germans embraced a strain of pacifism in the post-World War II world. Experts said it’s important to separate a rhetoric and identity built around pacifism from the reality of Germany’s foreign policy — West Germany was the front line against Russia in the Cold War — which makes it, as Barker said, “a historiography that the Germans and the international community tell themselves about the Germans.” But even so, that perception and embrace of pacifism is still bound up in Germany’s national identity.

In 2014, after Russia’s aggression in Ukraine, NATO members agreed on a timeline for members to spend 2 percent of their GDPs on defense. Germany made the commitment, too, but it was mostly driven by outside pressure, specifically Germany’s allies, like the United States, (who asked sometimes nicely and sometimes less so). Germany still struggled to meet those targets, and was expected to spend about 1.5 percent of its budget on defense in 2021. Some of that lack of urgency came from the sense that the German public wasn’t into beefing up Germany’s defense, so politicians lacked the motivation to make the case for it.

“At the heart of it, there really has never been the sort of public support for strong defense posture. And therefore, no politician has really been the one to make that issue their own, and really push it forward,” Rizzo said.

The shock of Russia’s invasion upended that. Preliminary live polls conducted by Civey, a German polling firm, show clear backing for Germany’s new course. At publication time, one showed that 74 percent of respondents supported Scholz’s decision to invest €100 billion into the Bundeswehr, which included overwhelming majorities from parties on both the right and the left — including from the Greens (73 percent), traditionally the more pacifist party of the current governing coalition, to the Free Democrats (81 percent), traditionally fiscal hawks, but whose leader, Finance Minister Christian Lindner, has embraced Scholz’s plan to spend billions on defense.

Germany’s politics have a reputation for stability; from the outside, upending years worth of foreign and defense dogma doesn’t quite square with that. But Barker said that, in some ways, these kinds of dramatic turning points are part of Germany’s political tradition: an outside event has to come along and force Germany — or, at least its chancellor — to seize the moment. A recent example would be Europe’s refugee crisis, and former chancellor Angela Merkel’s decision to welcome more than a million refugees.

So while there were forces pushing Germany in this direction, it took an event like Putin’s war to unleash it.

Barker likened it to pressure on a dam. “The threshold to break is much higher, much more difficult, much more intractable in Germany than other places,” he said. “But once it breaks, it’s like the floodgates open.”

The big question now is: what does it all mean? At the very least, Germany will be supplying lethal aid to Ukraine as it battles Russia, something Ukrainian President Volodymyr Zelenskyy has continued to plead for from the West. It is also likely to mean that Europe can send more arms, since Germany makes a lot of them, and will no longer be blocking their delivery.

But there are still a lot of unknowns, big and small.

The war in Ukraine drove this massive decision, so experts are watching how deep and robust this change is, and what it might look like in practicality. As experts said, this investment is going to be a shock to the system. The armed forces were underfunded, but money itself is only one part of the equation; there are questions about what it even focuses on and about its military readiness. “Absorbing 100 billion euros in defense spending in a year is like drinking from a massive firehose,” Barker said. “I don’t know if the German military has the absorption capacity to take on that much modernization at once.”

As Besch said, Germany was already in the process of developing a new national security strategy, so the resources arrive at the right time. But Germany has to fundamentally grapple with the kind of military it wants to have, where it wants to invest money on strategy and equipment, and whether this is merely in response to Russia now, or if it will want to stay on this course in the longer term.

How Germany wrestles with this question may echo across Europe, and the trans-Atlantic alliance. Europe, too, has talked for years about establishing a security identity separate from NATO — what the nerds call “strategic autonomy.” Afghanistan added new urgency to this idea, as it reminded Europe of its dependence on the US for its own security. Germany’s overall reticence on defense, and the justified lack of desire to really invest there, always made the idea of a strong European security policy seem more theoretical than practical. But Germany’s latest decision is born from a sense that it, and Europe, isn’t really secure — and that may reshape how the continent approaches defense, even beyond NATO.