Nobody — and I’m talking absolutely no one — needs a Margaritaville-branded frozen drink maker that automatically rotates between three pitchers, blasting frozen concoctions out in record time. Not even Jimmy Buffett himself needs that.

But damn if it isn’t fun and absolutely preposterous all at once. I might even buy one if it didn’t cost — wait for it — more than $500.

Frankly this t hing is built for exactly who you’d expect it to be built for: a boomer-aged Parrot Head with money and lots of parties to host. And that’s OK. Not every product is for everyone.

So why did I review this monstrosity of a frozen drink maker called the Tahiti Frozen Concoction Maker? I mean look at this ridiculous thing.

It holds ice in a well above three blenders, all of which are set to make a certain type of cocktail. The ice automatically shoots from a nozzle into a hole atop the blender, then the machine shaves the ice and whirs together a frozen concoction. Blenders are, in general, pretty expensive, but this sucker is only for making frozen drinks.

So, again, why did I want to try it? Time for a confession: I’m a Parrot Head. No, I am not a Boomer. No, my budget does not include 500 bucks for a booze blender. But I aspire to live the Buffett lifestyle. Hawaiian shirts, hammocks, cold drinks, these are some of my favorite things. I genuinely believe “A Pirate’s Look at Forty” is a kickass, perfect song. I live in New York City and one of my great desires is to brave the hellish maw of Times Square to visit the Margaritaville Times Square Resort. So if I could bring some of that magic home to me…well, then I wanted to do it.

And I don’t believe in half measures, so if we’re going to do it, I don’t want a simple blender. I want the most bonkers thing available.

I even took the Tahiti Frozen Concoction Maker on a little road trip from my apartment in Brooklyn to my in-laws home in Virginia. I mean, even if it’s November, spiritually it felt correct to test a Margaritaville blender by the water with people I love.

The machine was an easy assemble. Basically, wash three blenders, affix the ice well and you’re pretty much ready to go.

The way it works is simple. You load up the ice well, put the ingredients for a drink in each blender — such as tequila, triple sec, and lime juice for a marg — set that blender to a certain setting, and watch it go. From there, the machine does all the work, dropping the proper amount of ice in each drink, automatically sliding the ice-luge-nozzle and blending each drink one at a time.

You can set each blender to “margs, daiquiris, mojitos, smoothies, slides, or coladas.” There are also switches to manually shave ice or blend.

The machine came with suggested drinks and I decided to make some of those — might as well lean on Jimmy for a frozen concoction. I made the suggested margarita, mojito, and daiquiri. The drinks were kind of what you would expect. The marg was pretty basic (tequila, triple sec, lime juice, orange juice, margarita mix.) The mojito had rum, mint, and way too much sugar. The daiquiri called for a bunch of frozen strawberries, though, so that seemed fun. Here’s how it looked loaded up with ingredients. 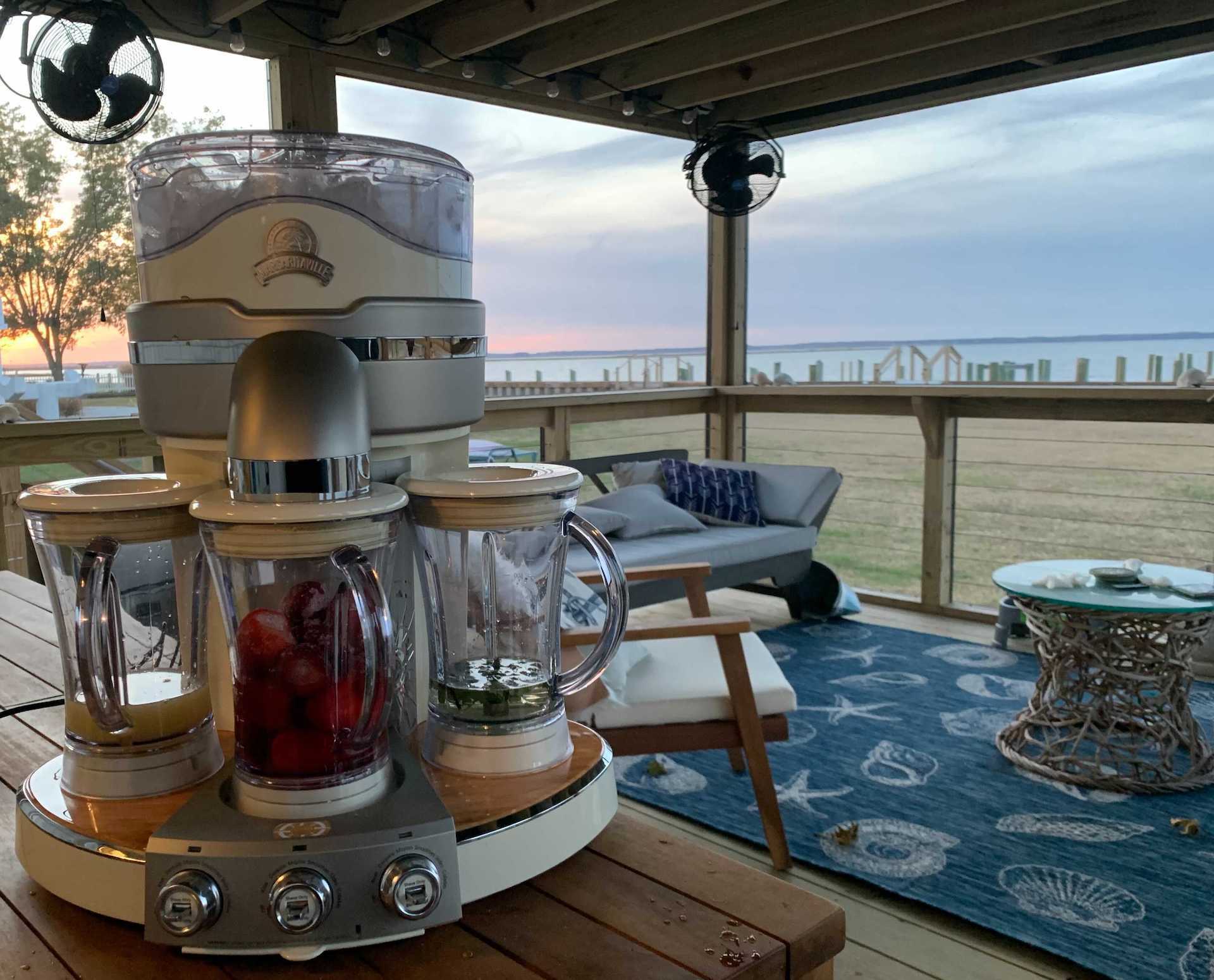 Close up shots of the drinks, pre blend.
Credit: mashable

I set each drink to their proper setting and whirred the thing to life. And, I’ve got to be honest, it was pretty cool to watch the blender go. My father-in-law, who loves a good gadget, was thrilled to see the ice luge dispense, the blender blend, then the nozzle automatically move on to the next cocktail. Watch this thing go.

I mean, come on, kind of neat right?

The blenders fully did their job. They made light work of frozen strawberries and ice. It’s definitely a high-powered machine.

The verdict on the drinks? They were ice-cold cocktails, what’s not to like? 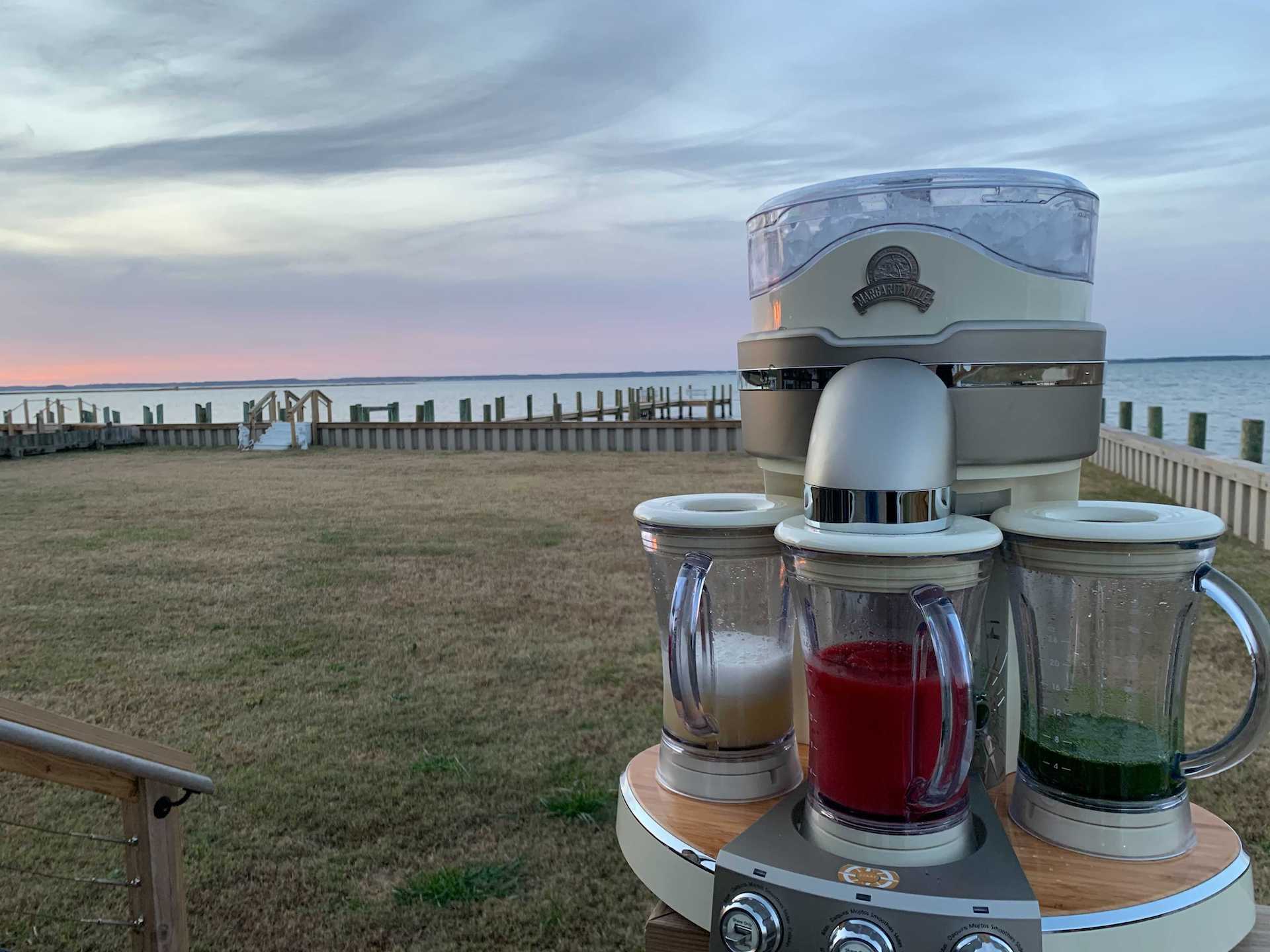 Drinks with a hell of a view.
Credit: mashable

The daiquiri was far and away the favorite among the family. The frozen strawberries gave the drink a thick, smooth consistency. The margarita was tasty but not a fully frozen drink. It was more of a slushy, but delicious nonetheless. The mojito was bad. It was way too sweet, didn’t taste like a cocktail — there was zero bite to it — and the recipe made small, unfrozen servings.

One mistake I made was not making sure the ice was properly broken up before the running the machine. I was using square cubes, some of which were still frozen together after being dispensed by an ice maker. I think that might’ve meant fewer cubes made it into my drink than intended. Still, the drinks turned out well. None of the margarita or daiquiri went to waste. Perhaps the mojito would’ve been better if I had broken the ice up properly. 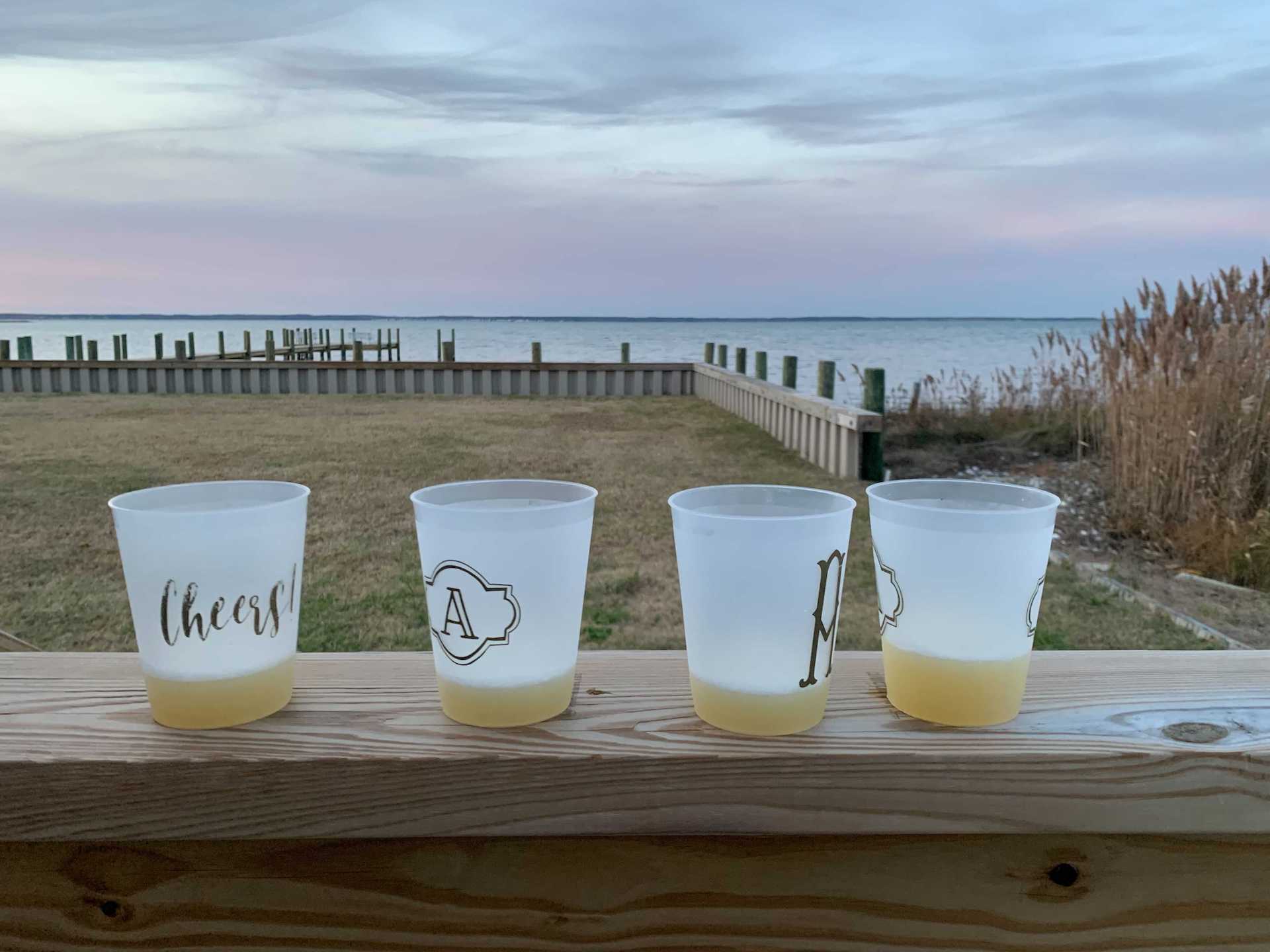 If I were to actually own this machine, I’d definitely come up with some recipes of my own, instead of relying on the ones in the packaging. For instance, I could see White Claw slushies with frozen fruit being absolutely delicious and easy to make in this thing.

Would I buy it? No. Let’s be real: It’s a $525 frozen drink maker. That’s a lot of money for a very specific gadget. I will use my blender if I ever need to make frozen cocktails. Again, there isn’t a person on Earth who needs this thing.

But is it cool? Would it be fun to break out at a party? Does it make a decent drink? Yes, yes, and yes. If you have a ton of people over, it would be an amazing tool for passing out drinks fast.

If spending $500 doesn’t mean all that much to you; if you’ve got a beach house and lots of friends; if you simply have to live that Jimmy Buffett lifestyle — well then I guess I would understand buying it.

That’s the trick, really. The product isn’t a three-blender frozen drink maker. Nope. The actual product is the idea of throwing a big party, with your auto-blender for drinks, and everyone is in Hawaiian shirts and laughing and you’re as relaxed as you’ve ever been.

Still, for now I’ll have to use my standard-issue blender to make frozen concoctions. But hey, at least I’ve got a hammock.