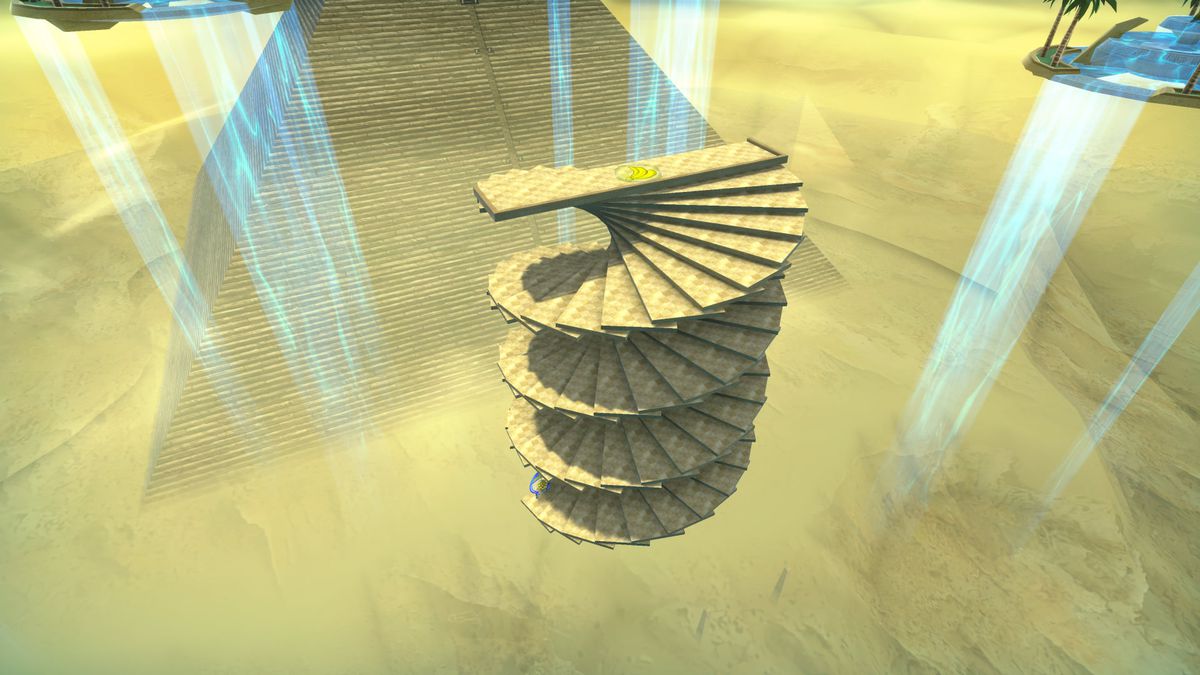 As a kid, I remember spending hours playing Super Monkey Ball and Super Monkey Ball 2 on the GameCube with my sister. The games are lighthearted and colorful, have fun single-player and multiplayer modes, and the monkeys feel like something out of a Saturday morning cartoon. I haven’t touched the series since, and I figured Banana Mania would be the perfect nostalgia trip for me. While it is a lot of fun, I also found it surprisingly frustrating.

The early stages in Banana Mania’s single-player story strike a nice balance in terms of difficulty. When it feels like you have just enough control of your monkey as it careens down a slope or over obstacles to get it toward the goal, the game is a blast. About halfway through the story mode, though, Banana Mania became punishingly difficult for me. Many stages required a level of finesse, touch, and a bit of luck that I often just couldn’t achieve, which meant that I regularly fell off of a tiny balance beam or hurtled off a ramp because I didn’t approach it at the right angle.

Fortunately, Banana Mania offers a helper mode, which doubles the amount of time you have to complete a level, drops arrows along the optimal path, and lets you turn on slow motion to have more control. You can access the helper mode from the pause menu, or the game will prompt you to turn it on if you fall off a stage enough times. It is, indeed, very helpful.

But as I got further into the game, I found I would often try a level once or twice before giving up, flipping helper mode on, and moving through the whole thing in slow motion. A number of times, I couldn’t beat a level even with helper mode, so I’d just skip it, which you can also do from the pause menu. (Skipping a level costs some in-game currency, though, and if you don’t have enough, you’ll have to earn more through playing other levels or modes.)

I’m sure there are people who will revel in the challenge, but Banana Mania was just too punishing for me. I’ll admit that I was surprised by the difficulty, but maybe I just forgot about it after years of not playing the original games. If the later levels were too tough for me, they probably won’t be easy for the younger target market for which the game seems to be designed. Though it is good that you can skip levels, even if that has an annoying cost.

There’s a lot more to Banana Mania than the challenging single-player, though. There are also 12 multiplayer party games, which include things like bowling, billiards, and golf. (Yes, the beloved Monkey Target is back, and it’s still great.) Most of these games are easy to play, and each lets you customize some rules to your liking. I played them for a couple hours with my sister and some family, and we had a blast cycling through them. Many don’t have too much depth, but if we got bored of one, we’d just hop into one of the 11 others.

I also have to mention one of the most charming elements of Banana Mania: Sega took a cue from Super Smash Bros. by adding a number of video game icons as playable characters you can unlock or purchase as DLC. Many of them are Sega legends, such as Sonic and Tails and actual Sega consoles, but there are some non-Sega characters as well, like Sanrio’s Hello Kitty.

I loved using the non-Monkey Ball characters as I played through the story mode. My favorite was Sonic; rolling around as the blue hedgehog almost felt like playing an extended special level in a Sonic The Hedgehog game. You can’t play as the extra characters in multiplayer, though, which is disappointing. I’d love to be able to play a round of Monkey Billiards as Kiryu from Yakuza.

I’m torn by Super Monkey Ball Banana Mania, which feels like it offers two very different experiences in one package. Many of the multiplayer party games remain just as fun as they were when I played them as a kid, but the single-player didn’t hold up in quite the same way for me. Often, it’s quite fun, but sometimes the difficulty can drive me bananas.