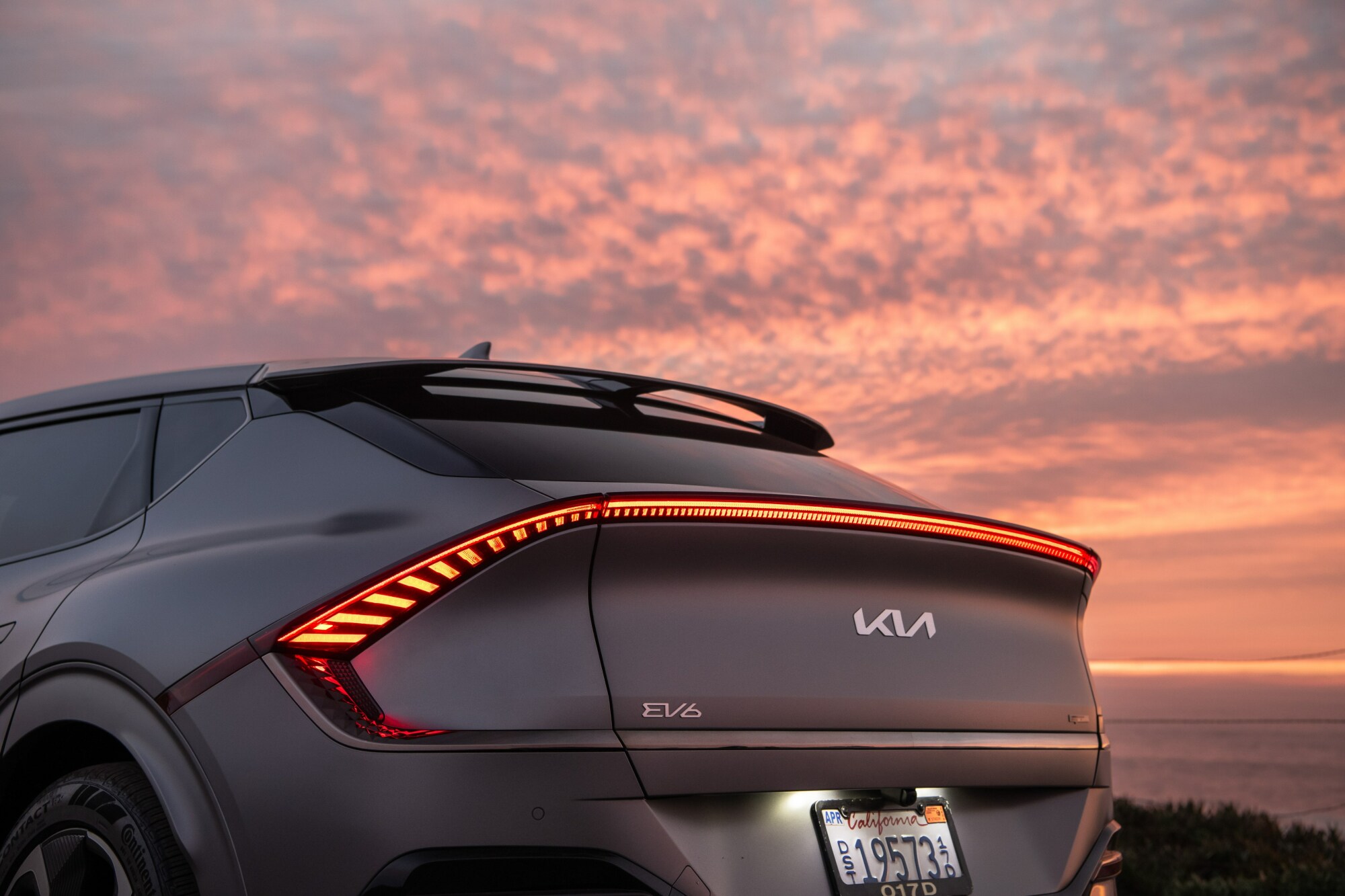 The best part of driving Kia’s newest EV through California’s wine country was that no one could figure out that I was in a Kia.

The EV6 is arriving in the U.S. in the next month and brings with it a different look for the Korean automaker. It’s not just the first standalone Kia EV (there won’t be a gas-powered or hybrid version of this car), but the start of a new aesthetic. While I stopped to take photos near Clearlake, north of famous Napa County, a man working in his yard told me the car looked cool, but what was it? He looked surprised when I said it was an electric Kia.

From behind, the EV6 looks like no other Kia thanks to its sharp lines and upturned back hatch. While decidedly not a Tesla, it fits in with other new EVs from Audi, BMW, and upcoming cars like the Cadillac Lyriq. It has less of a nerdy EV vibe than the now-recalled Chevy Bolt, Nissan Leaf, or even earlier Kia EVs like the Niro or Soul.

Inside, there’s also a new battery platform, called E-GMP, that Kia is sharing with Hyundai EVs, like the Ioniq. With the battery lying on the base of the car like virtually all EVs, there was an open, spacious interior with plenty of legroom in the back row. The EV6’s size is tricky to pin down: It looks compact, but its base is the same size as the Kia Telluride SUV. It’s similar to Ford’s Mustang Mach-E electric SUV, but looks even slimmer from the outside.

The EV6 was first announced back in March but Kia has been coy about the pricing until now. It’s much more competitive than the growing list of budget-blowing EVs like the Porsche Taycan, Lucid Air, and most Tesla models, which cost $100,000 or more.

With a $40,900 starting price, it’s still not as cheap as more economical gas-powered cars upfront, but base prices are clearly dropping. Plus, Kia still qualifies for a $7,500 federal tax credit, something Tesla can’t say.

But the good news for cheapskates is that between the pricier models and the base models, the performance and range didn’t dip all that much in my experience. For the first part of my day with the EV6 I was in the dual-motor, all-wheel drive version. It was quick and powerful and capable of going 0 to 60 mph in 4.6 seconds, but when I switched to a single-motor car in the afternoon it handled the curvy mountain roads, and let me zoom past slowpokes taking in the sunny NorCal day at a leisurely pace. Although there wasn’t a heated steering wheel in the single motor version, I survived.

After more than 130 miles driving in the two variations on country roads, three-lane highways, and mountain passes, I was impressed with the aggressive brake regeneration. You can set braking to Level 0, 1, 2, 3 or to the max “I-Pedal.” Regen captures kinetic energy while driving, and sends it back into the battery. I kept the regen at max and saw my range increase by 5 miles while coasting on a steep downhill for several miles, despite being in the range-intensive sport mode (eco or normal modes would’ve given me even more extra range). I was very proud.

Other impressive features include what Kia calls “vehicle-to-load” charging. This means you can use your Kia as an electrical outlet for power tools, electronics, or — in one fun stunt — even a blender that Kia staffers set up to prepare soup at the local winery where they were staging a press event. While it’s not powerful enough to charge other EVs in a reasonable amount of time, your car can become a power bank on wheels. 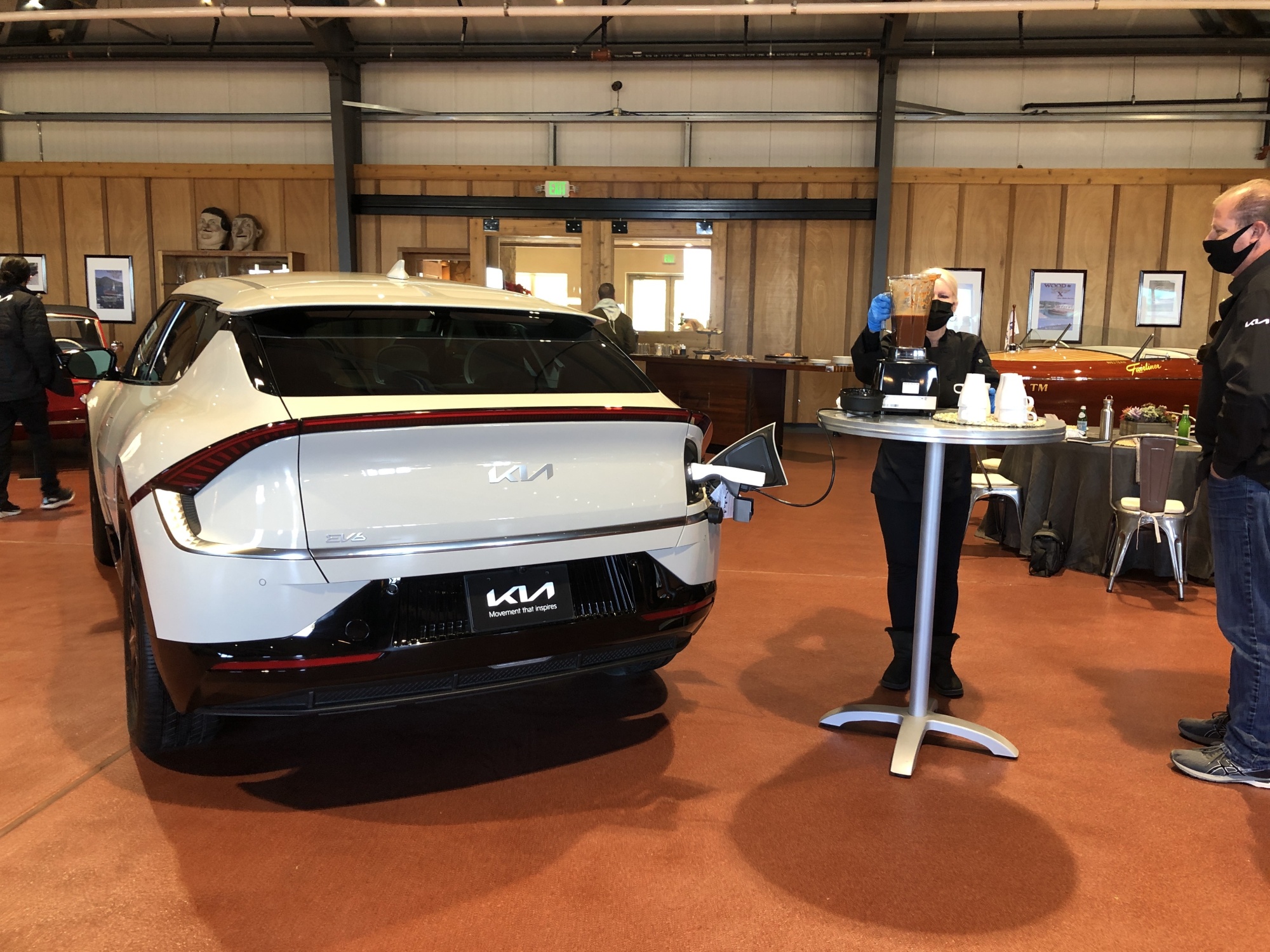 But the cool blender party trick couldn’t cover up the disappointingly small frunk size. The front trunk (that’s where the “frunk” portmanteau comes from) isn’t really trunk-sized, and is really only suitable as a compartment for storing cables and cords. Sorry to all the frunk fans. 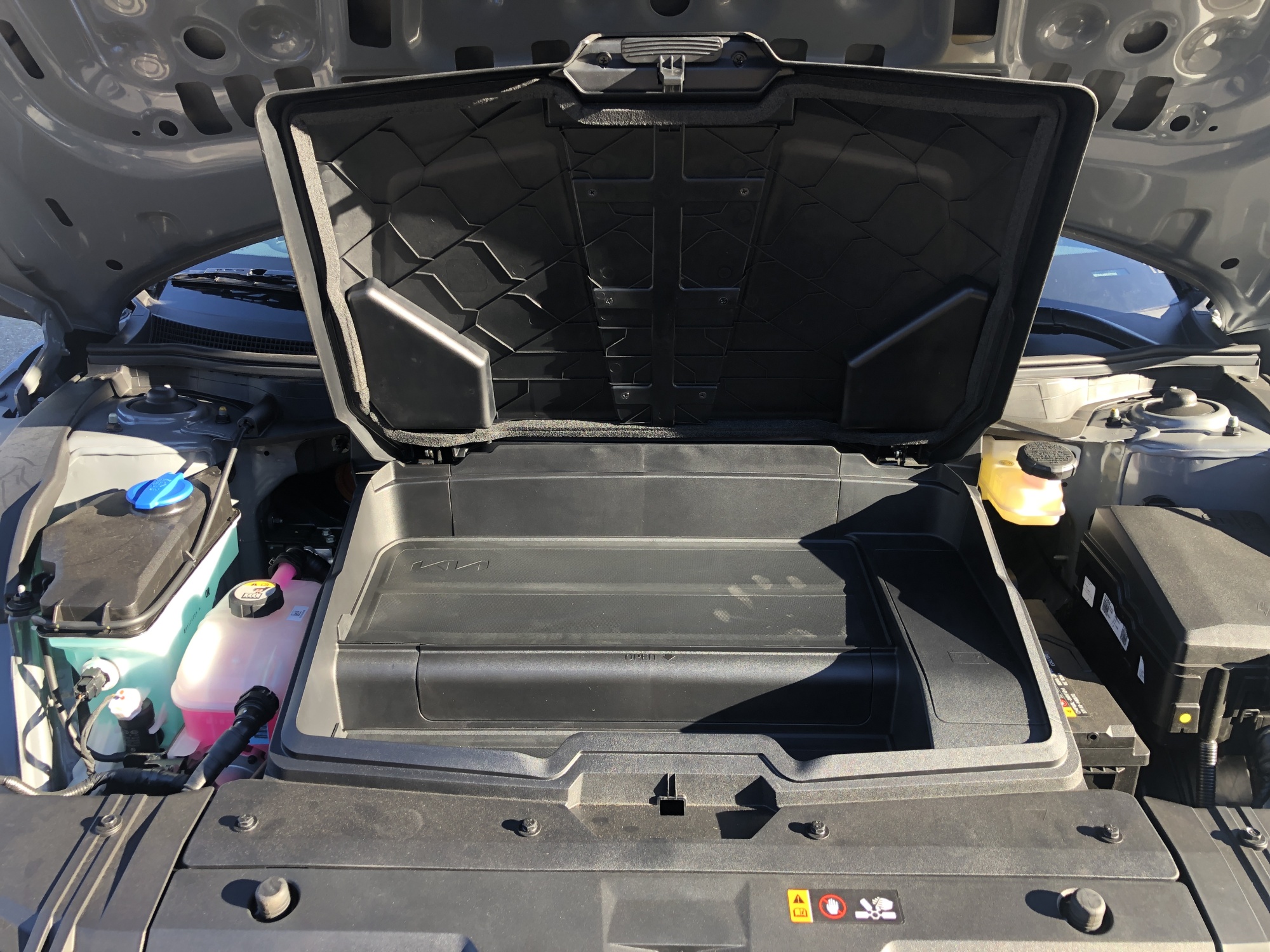 Inside, a digital touchpad below the 12.3-inch touchscreen was confusing. There were only digital buttons to switch between the climate controls and the map and media features, and it wasn’t clear were to find those. But I appreciated an array of safety features that popped up on the display behind the steering wheel whenever I put on the turn signal. On top of blind-spot object detection and on-screen graphics that warned me about cars and objects in the way, there was an entire video display, showing what was happening alongside the car via one of the EV6’s many onboard cameras. This was especially helpful when looking out for cyclists and pedestrians out on the rural highway. Tesla recently added a similar feature to its EVs. 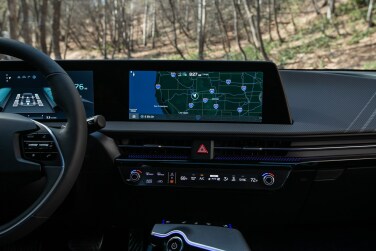 Too many buttons.
Credit: Kia 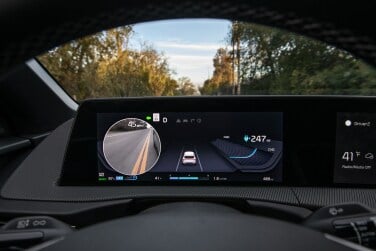 Even after driving for five hours with no charging stops (only lunch, photo, and bathroom breaks for the driver), I got back to the starting point feeling fairly fresh and energized. That might’ve been a testament to the smart cruise control with automatic lane changes I turned on during the highway driving portions, and the suede and vegan leather seat. The screen readout said I still had 44 percent of the battery left if I wanted to keep going.

We’ve been waiting for the accessible, but still aesthetically pleasing, EV floodgates to open. And the EV6 is leading the charge.