Home Feature news Lucid unveils top-of-the-line performance EV that does zero to 60 in under...
Feature news 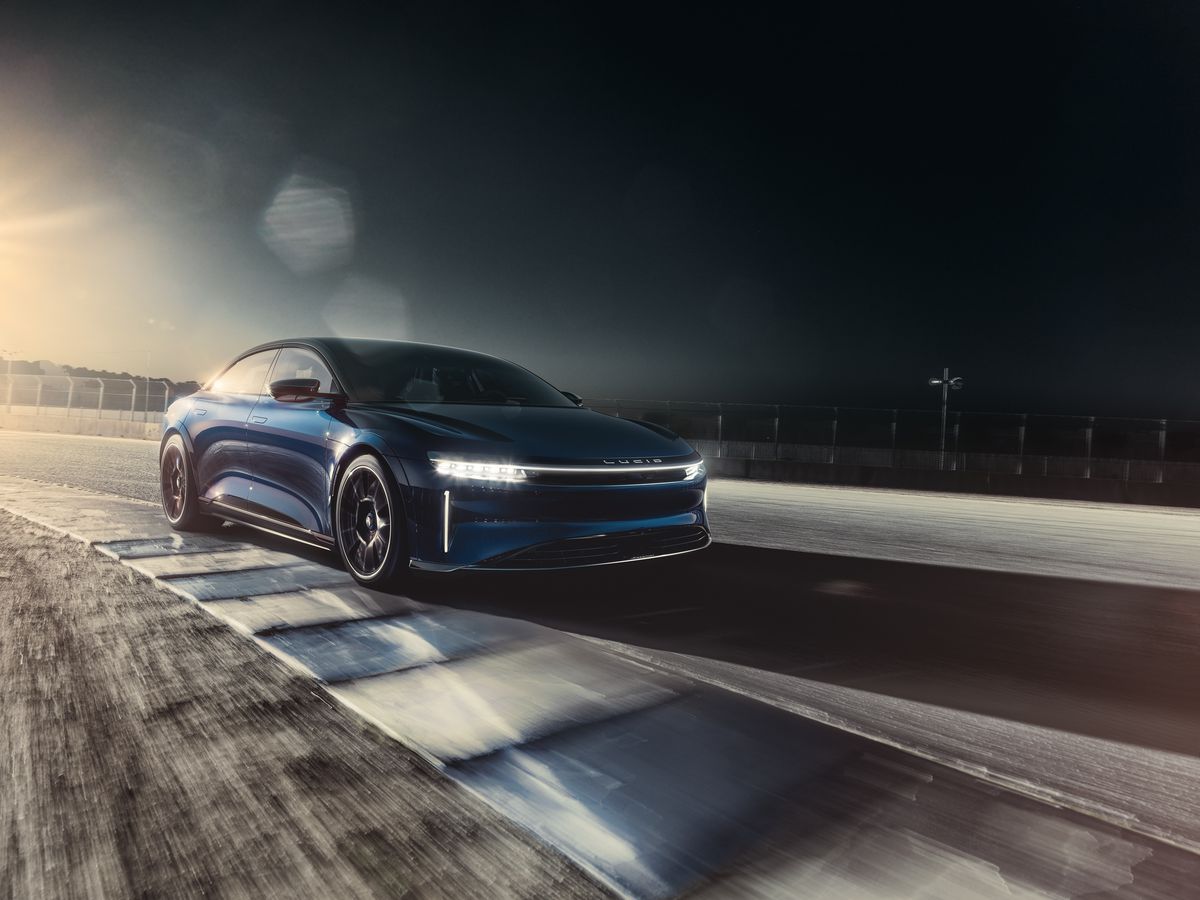 Luxury electric vehicle maker Lucid Motors unveiled the new Lucid Air Sapphire Edition, a top-of-the-line sedan, which the company says will do zero to 60mph in under two seconds, zero to 100mph in under four seconds, and the quarter-mile in under nine seconds.

That’s tremendously impressive in a full-size, fully-electric luxury sedan and potentially makes the new sapphire blue car the most powerful production sedan on the market, beating out the previous record holder, the Tesla Model S Plaid.

The new Sapphire Edition, which was revealed Friday during Monterey Car Week, pairs a number of the features from Lucid’s lower trim models like the Dream Edition and the Grand Touring Performance Edition. First, the new version of the Air gets three motors, two at the rear and one at the front, that Lucid says brings the estimated horsepower up to 1,200.

At the time of release, Lucid didn’t offer up any torque numbers, but as Eric Bach said during an early briefing for journalists, “Lucid is redefining what the family sedan can do,” with the release of the new model.

The twin rear-drive unit gets two 500kW inverters that are based on those in the Dream Performance Edition, plus custom planetary gear reduction units. That rear setup allows for torque to be applied to each wheel in opposite directions so that the Sapphire Edition will get more stability and control. The system can also apply regenerative braking to individual rear wheels to make the large sedan corner more precisely.

Lucid says that the twin rear-drive unit also gets new heat exchanger technology and an increased coolant flow rate. While the company said that they’ve upgraded the battery system for higher power and better thermoregulation, it didn’t release specific details at the time of release.

When going big on power, you have to go big on brakes, suspension setup, and tires, too. To that end, Lucid upgraded to carbon ceramic brakes, changed the spring rates, gave the Sapphire a higher damping, added sway bars, and upgraded the power steering and ABS system.

The Sapphire Edition will also get custom composite wheels and a special set of tires (20 inches at the front, 21 inches at the back) made of a compound that offers a combination of low rolling resistance and high grip, similar to a Cup 2 tire. Lucid will also offer a set of wheel shields that can be attached via the center locks to the wheels to help make them more aerodynamic and efficient for longer, more leisurely drives.

In addition to all the performance bits, the Sapphire Edition gets some visual changes as well — most importantly, the exclusive-to-Sapphire blue exterior and a new stealth trim look that smokes out the brightwork, including the side-view mirrors and the added duckbill spoiler at the rear. The fenders are slightly wider at the rear (by about 24mm according to Lucid), and the front gets wider by 12mm.

At the same time, however, even with the additional motor, the interior space and packaging all fit within the same footprint as the standard Lucid Air. Interior space and luggage space won’t diminish with the Sapphire Edition, and the vehicles will be built on the same line as the rest of the Airs being assembled at the company’s factory in Arizona.

In June of this year, Lucid took the Grand Touring Performance model to the Goodwood Festival of Speed where Ben Collins, aka The Stig, piloted the sedan up the famous hill at the event and set a record as the fastest production sedan to do the climb.

We did get a quick two laps around WeatherTech Raceway with Collins in the same vehicle that did the Goodwood Hillclimb early on Thursday morning. On a damp, fog-shrouded track, the Performance Edition is tremendously impressive.

Like all EVs, the Lucid Air Grand Touring Performance has tremendous amounts of torque and power, but what’s so impressive and striking is how silent all of it is, minus the sound of the stock tires approaching their grip limit. Collins is a master driver and effortlessly maneuvered the sedan around the tight (and blind) Corkscrew.

The new Air Sapphire Edition will be even faster, according to the company — and we’ll get to ride in the left seat with Collins in the new version early on Saturday morning, so stay tuned.

Lucid says that the new Sapphire Edition will start at $249,000, which is $69,000 more than the Grand Touring Performance ($180,000). The company is also facing delivery delays and is behind on production, thanks in part to the supply shortage caused by the pandemic and logistics problems. The company also had to raise prices on its vehicles this year as global inflation threatens.

Lucid wouldn’t say just how many of the Grand Touring Performance vehicles it plans to build, but it did say that production will be limited as a result of the new components needed for the vehicle. Reservations opened today for the new cars. A company spokesperson confirmed that existing reservation holders wouldn’t be displaced or delayed by Sapphire orders and that deliveries would start in the first half of 2023.