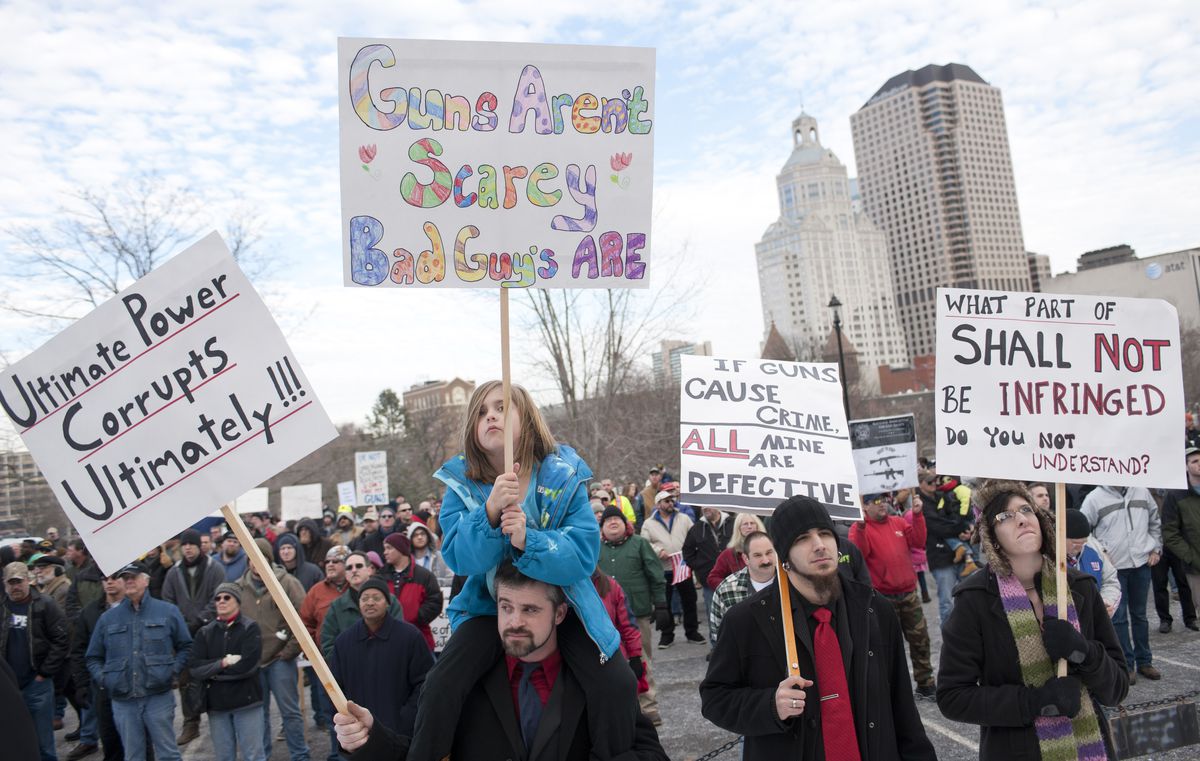 Immediately after the mass shooting at Robb Elementary in Uvalde, Texas, the state’s Republican attorney general, Ken Paxton, argued that the best way to prevent such a horror from happening again would have been to arm the school’s staff.

“We can’t stop bad people from doing bad things. We can potentially arm and prepare and train teachers and other administrators to respond quickly,” he said on Fox News.

The fact that Robb had an armed school security officer did not seem to deter Paxton (police have given contradictory answers on whether this officer exchanged fire with the shooter). Nor did the fact that what he’s describing is already permitted under Texas law: a 2013 bill, passed as a direct response to the 2012 mass shooting at Sandy Hook Elementary in Connecticut, permitted trained staff members at Texas schools to secretly carry weapons. The state expanded this policy in 2018 in response to a mass shooting at a high school in Santa Fe, Texas.

Recent research finds that this seemingly perverse response — the use of a mass shooting as a justification for loosening gun laws and calling for more guns — is actually the norm in the United States. One study, published in the Journal of Public Economics in 2020, examined state legislatures’ policy responses in the wake of mass shootings — and found that they were heavily tilted toward lax regulation.

Research by Kristin Goss, a political scientist at Duke University, helps explain why this happens. In two recent publications, Goss compares the political activities of pro-gun rights citizens and activists to those who favor gun regulations. She finds strong evidence that pro-gun rights citizens are consistently more engaged in the political process, both after mass shootings and otherwise (though the gap has been narrowing).

“Different levels of mobilization reflect the different capacity of groups on each side to do the mobilizing,’” Goss writes. “By these measures, the gun rights side has a strong advantage.”

Put together, the political science on gun policy after mass shootings paints a grim picture of America’s future after Uvalde.

Though polling shows strong public support for enhanced gun control policies like background checks, the most likely outcome is not any kind of breakthrough on these issues. Instead, the strongly held beliefs and superior organization of pro-gun citizens — together with a political system structurally biased in the GOP’s favor — make the opposite more likely: a future where the intense efforts of a radically pro-gun minority continue to expand the availability of firearms and their presence in everyday American life.

In the Journal of Public Economics paper, Harvard’s Michael Luca and Deepak Malhotra, with UCLA’s Christopher Poliquin, examine every piece of gun legislation passed between 1989 and 2014, comparing what happens in the year following mass shootings to more “normal” legislative sessions.

Their first finding is that mass shootings do indeed galvanize legislative efforts to change gun laws — and that the worse the mass shooting is, the more likely it is spur legislation.

The difference is even more striking when you look at bills that actually become law.

“Supporters of gun rights are more likely to advocate for their positions by writing letters or donating money) and are better-organized than citizens favoring gun control,” the authors theorize.

But is this what actually happens in the wake of tragedy?

Goss, the Duke political scientist, examines this phenomenon in a pair of recent papers.

In a 2017 article, she studies a series of topics related to gender and political views on guns. Generally speaking, she finds that both partisanship and gender matter: Democrats are consistently more pro-gun regulation than Republicans, but women in both parties are more likely to support gun control than their male co-partisans.

To see how these divides play out in practice, Goss examines political activism in the wake of the 2012 Sandy Hook shooting, looking specifically at three surveys conducted in a six-month period surrounding the attack. The survey assessed whether respondents had ”contacted a public official to express their opinion about gun policy; contributed money to an organization that takes a position on gun policy; expressed their opinion on gun policy using Facebook, Twitter, or another social network; or signed a petition about gun policy.”

What she found was striking: Pro-gun rights men were by far the most likely to engage in political activism in the months following Sandy Hook.

These men were more engaged on every measure except expressing an opinion on social media, where pro-gun rights women were (slightly) more active. Gun control supporters consistently lagged behind, sometimes by huge margins: pro-gun rights men were, for example, nearly five times as likely to donate to a gun rights group than gun control advocates of either sex were to donate to a gun-control group. The only exception was one element of the post-shooting debate on background checks, in which pro-regulation women reached out to legislators more than pro-gun rights men.

The overall discrepancy is not necessarily because gun rights activists care more about the issue than their anti-gun peers, according to Goss. Rather, the key difference is that the pro-gun organizational capacity is stronger: advocacy groups like the NRA are considerably better at getting their supporters mobilized than their anti-gun opponents.

“[Pro-regulation] women remain generally undermobilized relative to pro-gun men when it comes to other forms of engagement around gun policy,” Goss writes. “Even though pro-gun men are fewer in number than pro-regulation women, the men generally produce more political activity.”

In a 2019 paper, Goss examines whether anything in the years since Sandy Hook has changed this general pattern.

She finds that the shooting did profoundly alter the pro-regulation activist landscape, leading to an influx of money from pro-regulation billionaire Mike Bloomberg and the formation of new advocacy groups like Everytown for Gun Safety. These changes created a more active and disciplined gun control movement, one more effectively engaged in the political process and better equipped to score legislative wins.

But still, she writes, “these groups are David to the gun lobby’s Goliath” — a political behemoth whose revenues were (per 2017 data) “five times those of national gun violence prevention groups.” The result was a series of victories, even after Sandy Hook and the next 10 years of mass shootings, that outstripped the new pro-regulation movement’s more modest wins.

“In the early 1990s, the majority of states either barred people from carrying concealed firearms in public or strictly regulated the licenses to do so,” she writes. “By 2018, the situation was reversed. All states allowed concealed carry, and fewer than one in five states strictly regulated licensing.”

It’s possible this trend may change. In the past few years, the NRA has faced massive legal problems while gun control advocates have continued to organize.

But in an intensely polarized society where legislation faces many political veto points — like the Senate filibuster and an extremely pro-gun Supreme Court majority — it’s hard to make significant changes at the federal level or in Republican-controlled states. Gun control advocates aren’t just at an organizational disadvantage; they’re at a structural one. They’d have to outcompete the NRA and its allies not just a little, but dramatically, to really transform the way America responds to mass shootings.

As a result, the most likely outcome, at least in the short and medium term, is that after Uvalde, things will continue the way they’ve gone. Republican-controlled state legislatures will expand gun rights or at the very least preserve the status quo, entrenching the hegemony of the gun over American civic life.

Political realities can and do change, of course. But the challenge for the gun reform side remains daunting.