NASA’s megarocket is about to blast off toward the Moon 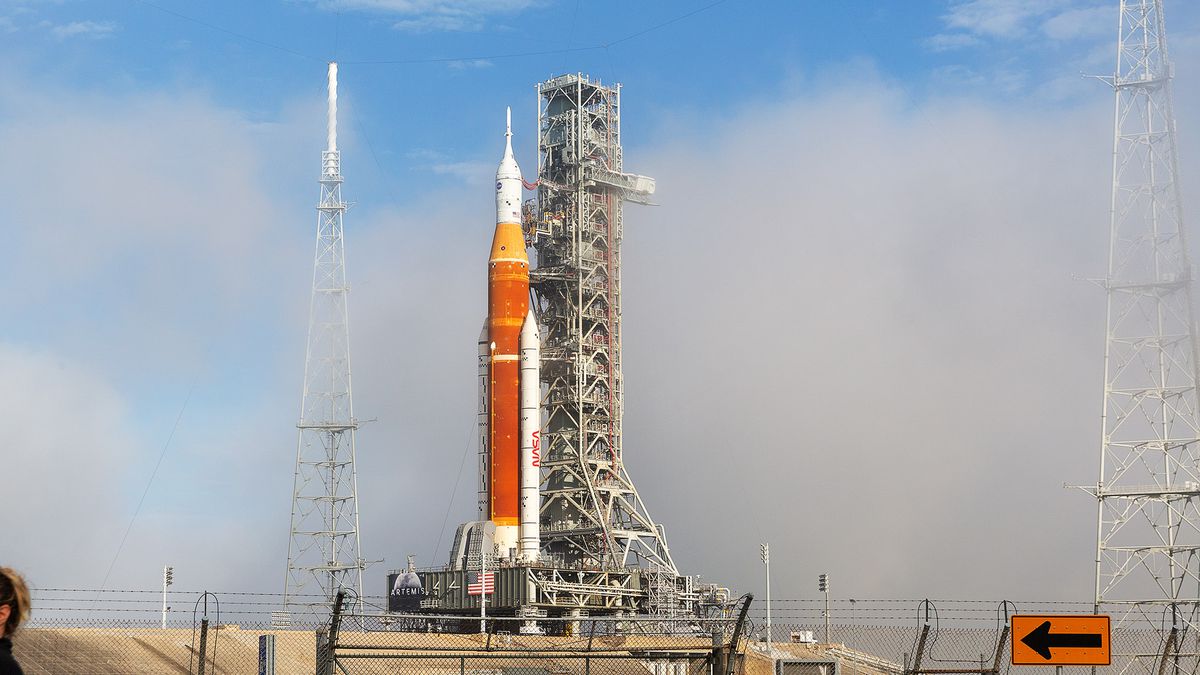 Okay, space fans. The moment is almost here. NASA is about to launch its next-generation rocket for the first time and send it hurtling out beyond the Moon. It’s going to be a wild time, but honestly, there’s been a lot going on here on Earth, too — and if you’re anything like me, you might be in the market for a quick refresher on what exactly is going down when NASA’s next big thing blasts off.

Consider this your SLS cheat sheet as NASA gears up for its big launch on August 29th.

It stands for Space Launch System.

It is. But it is also extremely functional, seeing as it refers to a system for launching things into space.

What kinds of things can SLS launch?

Whoa, how will it do that?

It’s going to light up like a 5.75 million-pound firework. Those boosters — the twin white cylinders on either side of the rocket — are 17 stories high and are packed with a solid rocket fuel called polybutadiene acrylonitrile. They burn through six tons of this fuel every second, according to NASA. In case you were wondering what this is in relation to jumbo jets, NASA has you covered. Each one “generates more thrust than 14 four-engine jumbo commercial airliners.” The two boosters will generate 75 percent of the boom that gets the rocket and its cargo off the ground.

But that’s only part of the rocket’s power. There’s also the 212-foot-tall core stage — the big orange part of the rocket. On launch day, it will be packed with 537,000 gallons of liquid hydrogen and 196,000 of liquid oxygen, which will fuel the four engines at the bottom.

All of that fuel and engineering translates to a boatload of power. Within 8.5 minutes of launch, SLS and Orion capsule that it’s carrying will be traveling at speeds of around 17,000 miles per hour.

What is the Orion capsule?

I know, another name. So, SLS will be carrying a spacecraft called Orion. (In pictures, it’s the white part at the top of the rocket.) It is not related in any way to the Orion gaming gadget.

Orion is designed for missions beyond Earth’s orbit, with potential destinations of the Moon or Mars. It’s got an extremely shiny look that will help it cope with extreme temperatures in space, a next-generation heat shield to cope with reentering the atmosphere, and a launch abort system that could blast astronauts to safety if anything went wrong during launch. In space, it can support four people on a mission for 21 days.

Orion flew to space before in a test flight in 2014. It’s been through a lot of testing since then in preparation for this next flight, which has been delayed many, many times. (More on those delays later.) Back in 2020, it looked like there might be a chance that it would get delayed yet again when some engineers discovered a problem with a power component for the spacecraft. Trying to fix it would have taken months, and they have backup systems available, so they will be flying the spacecraft as-is.

Are there going to be people inside Orion?

Nope. There will be three mannequins strapped inside, which look varying degrees of terrifying. One is named Commander Moonikin Campos, and it will wear one of the flight suits that astronauts will wear on future missions. It will be accompanied by the limbless Helga and Zohar, which will carry radiation detectors to figure out how much radiation astronauts might be exposed to during a trip to the Moon. Zohar will be wearing a vest that can protect against radiation. Helga won’t. Good luck, Helga.

One of the big reasons that there won’t be astronauts on board is that this entire launch is one giant test flight. It’s the first time that the SLS is having its big space debut, and putting people on a rocket before seeing if it can actually work feels like an extremely bad choice. (NASA very briefly considered doing exactly that, then decided against it.) Instead, Artemis I will be all about testing how well Orion and SLS work and pushing them to their limits before people get on board.

What is Artemis I?

Oh boy, yet another name! Artemis I is the mission that SLS and Orion are going on. Its primary goal is to make sure that Orion can work in space and that it can deliver astronauts safely back to Earth after the mission is over. As a bonus, it will fly farther from Earth than any spacecraft designed for humans has ever flown before, reaching a distance of 280,000 miles away from Earth.

During the course of its 42-day mission, it will travel a grand total of about 1.3 million miles, heading out to the Moon, then entering orbit around the Moon for several days before returning back to Earth. The maps of this mission look like an extremely large and very messy figure 8. If the launch goes as planned on August 29th, it should splash back down on Earth on October 10th.

Are there other Artemis missions?

Yep! If all goes well with Artemis I, NASA will move on to Artemis II, which will be the first flight of the SLS / Orion combo with crew on board. It’s also the first crewed mission back to the Moon since the Apollo era, but the astronauts onboard won’t land on the Moon — they’ll just orbit for a while, then return to Earth.

The ultimate goal is for NASA to land the first woman on the Moon during the Artemis III mission, which is still in the works. In August, NASA announced several potential landing sites near the Moon’s South Pole.

Yeah, that’s ringing a bell. How long has this been in the works?

The Artemis program? Since 2019, when then-Vice President Mike Pence announced that NASA was headed back to the Moon and would get there by 2024.

Fun fact! It got its name because in mythology, Artemis is the twin sister of Apollo, and there is just a ton of nostalgia for the Apollo missions, for better or for worse.

Absolutely not. They’re shooting for 2025 at this point, but that’s still pretty ambitious.

What about the SLS project? I feel like I’ve been hearing about that for longer.

You definitely have. Its origins date back to around 2010, when the US was shifting away from the space shuttle and toward other modes of space transportation. Parts of it started out as a project called Constellation that was canceled for being way too expensive. Then it was revived as SLS in 2010, with the goal of launching in 2017. That slipped to 2018 and kept slipping, as the project became notoriously delayed and over budget.

For a full look at the history, check out our story here.

But… they’re ready to go now?

Looks like it! Even though their dress rehearsal was cut short in June due to a hydrogen leak, engineers think that they’ve fixed all last-minute to-do’s for the rocket, and NASA has decided that it is a go for launch.

What else will be on board?

In addition to Helga, Zohar, and Commander Moonikin Campos, there will be a few other science experiments aboard Artemis I. During the mission, the spacecraft will deploy 10 small satellites called CubeSats. Some will map ice on the lunar surface, one will deploy a giant solar sail and head off to an asteroid, and one will attempt to land on the Moon. On board, there will also be a science experiment that will carry yeast where no yeast has gone before in an attempt to study deep-space radiation.

Also inside the capsule will be a plush sheep named Shaun. Also, Snoopy. Both Shaun and Snoopy will serve as zero-gravity indicators, floating around Orion once it reaches microgravity.

When is the SLS launch happening?

August 29th at 8:33AM ET. NASA will have a live stream on Monday, with coverage of the launch beginning at 6:30AM ET. Find more information about how to watch here.