Electric leisure boat startup Navier has managed to bring its concept hydrofoiling watercraft into reality, and has opened pre-orders — if you happen to have a few hundred grand laying around. It may not be affordable, but it’s not like the other 30-foot boats you can order are a bargain either. At least this one doesn’t burn 10 gallons of gas an hour.

Navier just picked up a seed round at the beginning of the year, at which point the boat was a 27-foot twinkle in the eyes of its founders, Sampriti Bhattacharyya (whom I met on the “Accelerator at Sea”) and Reo Baird. Now it’s a real 30-foot boat actually plowing through the waves at 25 knots.

The craft is fully electric and uses hydrofoiling to get around the fact that batteries, while fine for wheeled vehicles, run out fast when you’re pushing water out of the way the whole time you’re moving forward. Hydrofoiling basically takes advantage of the physics of how water resists forward motion to cause the bulkiest part of the boat to lift up above the surface, while the propulsion part stays below, attached by thin fins.

The basic approach is not unique — Candela also makes a few electric hydrofoiling boats and is trying to access some of the same markets. But Navier touts a longer range — about 75 nautical miles versus the Candelas’ 50 — and a more leisure-friendly experience. That is to say, cushier cockpit, more focus on user experience, and a sport mode that lets the driver more directly control the boat.

Its foils are also completely retractable, allowing the N30 to navigate shallows without scraping the bottom. Keeping them tucked in also minimizes “biofouling,” i.e. algae and barnacles.

Bhattacharyya was quick to add, though, that she considers Candela more colleague than competitor: the real competition is gas-powered boats. “I think to free our lakes and oceans from the fossil fuel pollutants, and rebuild the maritime industry we all need to do more, and faster. We have to replace our gas rivals — there are a lot of them, and the more folks in the industry can switch to electric quickly, the better we can expedite saving the planet,” she wrote in an email.

Aerial view of the Navier boat at its debut.

Of course at $300,000 a pop, they won’t be replacing dinghies with 5-horsepower outboards. This is aimed more at both the luxury crowd and at institutional customers like water taxi services. Fuel is expensive, narrowing already thin margins in marine transport operations. A ten-passenger boat that consumes no fuel could be just the thing for shuttling commuters across a bay or lake, or for three-hour tours. The amount of marine fuel expended on this type of trip is enormous, and gas-powered boats don’t run particularly clean.

The just-revealed N30 was described by Bhattacharyya as “software driven,” which at first seems an odd claim to make for a boat. But while most boats just float, hydrofoiling is a process that needs to be actively monitored to maintain stability.

“It is a combination of a boat and plane – there are lots of very complex parts, but that’s what it takes to build something that is step function more efficient,” she explained, comparing the boat to a fighter jet, which compensates for a natural instability with constant, software-defined adjustments. “The control system software is what stabilizes and flies it using sensor information and then driving the actuators. The user operates at a higher level (or outer loop), and drives it like a normal boat.”

Interior of the first Navier N30.

It may sound a little daunting, but practically every car does this now as well with traction control and all-wheel drive — you push on the gas, and the car figures out how much power to send to which wheels, adjusting on the fly if you hit water or ice. Some cars allow you to have a bit more control if you like it, and that’s the sport mode on the N30.

The plan is to incorporate more high-level software features, culminating (as all vehicles seem to these days) in a self-driving mode. For now the boat has automatic docking capability, which probably sounds nice to anyone who doesn’t enjoy this potentially finicky maneuver. 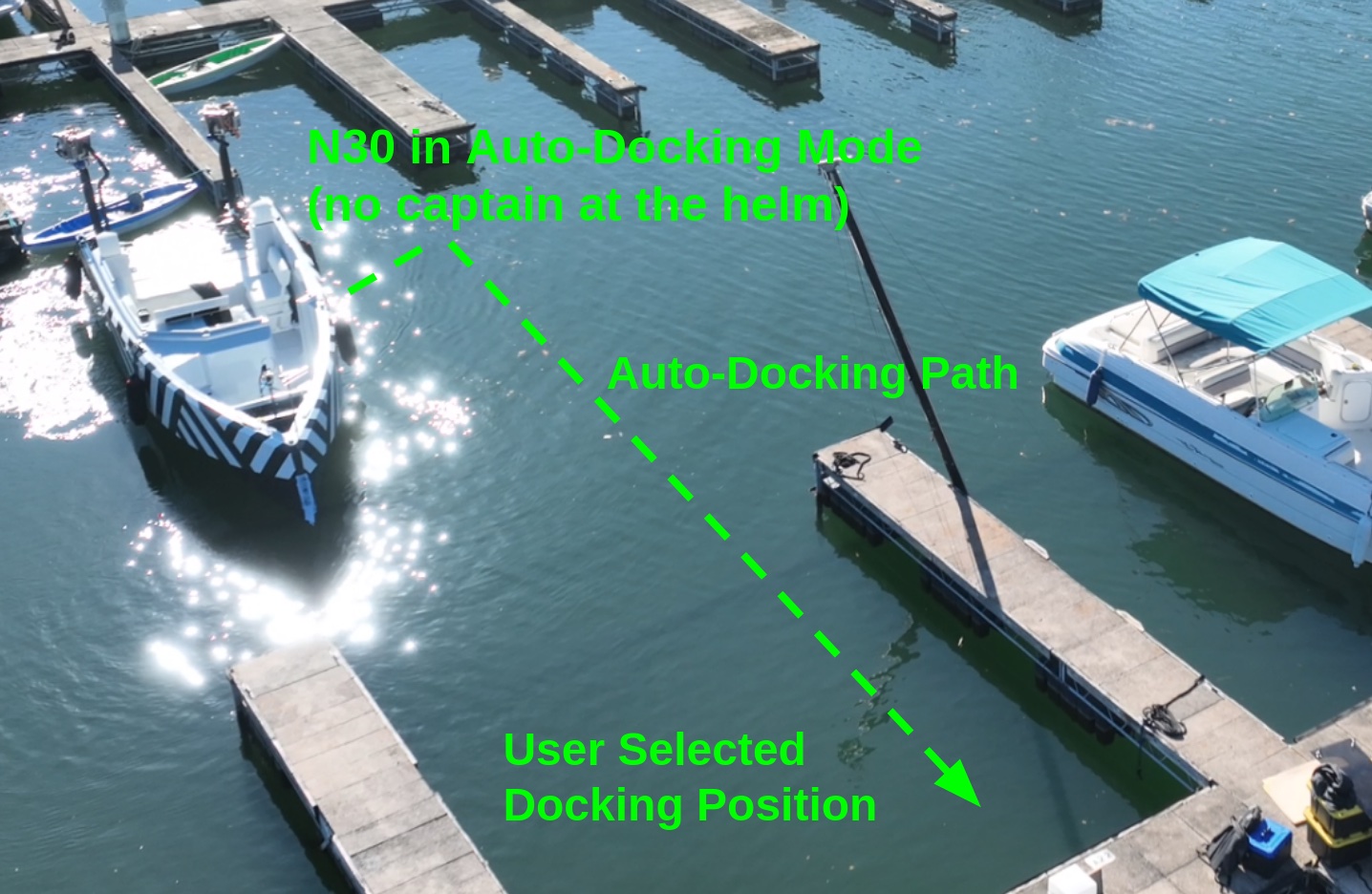 Illustration of a sample docking maneuver. Looks easy in theory, but…

“The N30 can autonomously direct the boat safely to a user-selected docking slip without any further input from the captain. The auto-docking system uses advanced computer vision and additional sensors to estimate the location of the boat with respect to the selected slip while compensating for external perturbations such as wind while also avoiding obstacles,” Bhattacharyya said.

There are three variants: open-top, hardtop, and cabin, which start at $375,000 and go up from there. It’s certainly a lot of money, but cabin cruisers this size aren’t cheap to begin with, and this is a state of the art electric vessel that basically flies. Sure, it’ll be a plaything for the very rich for the near future, but once the production methods and tech get a bit more established, you’ll start to see this type of craft trickle down to institutional uses (like water taxis) and perhaps even rentals. At any rate it’s nice to see a bit of innovation on the water, and I look forward to the days when the lakes are quieter and cleaner because of it.