One policy that could challenge a century of fossil fuel dominance 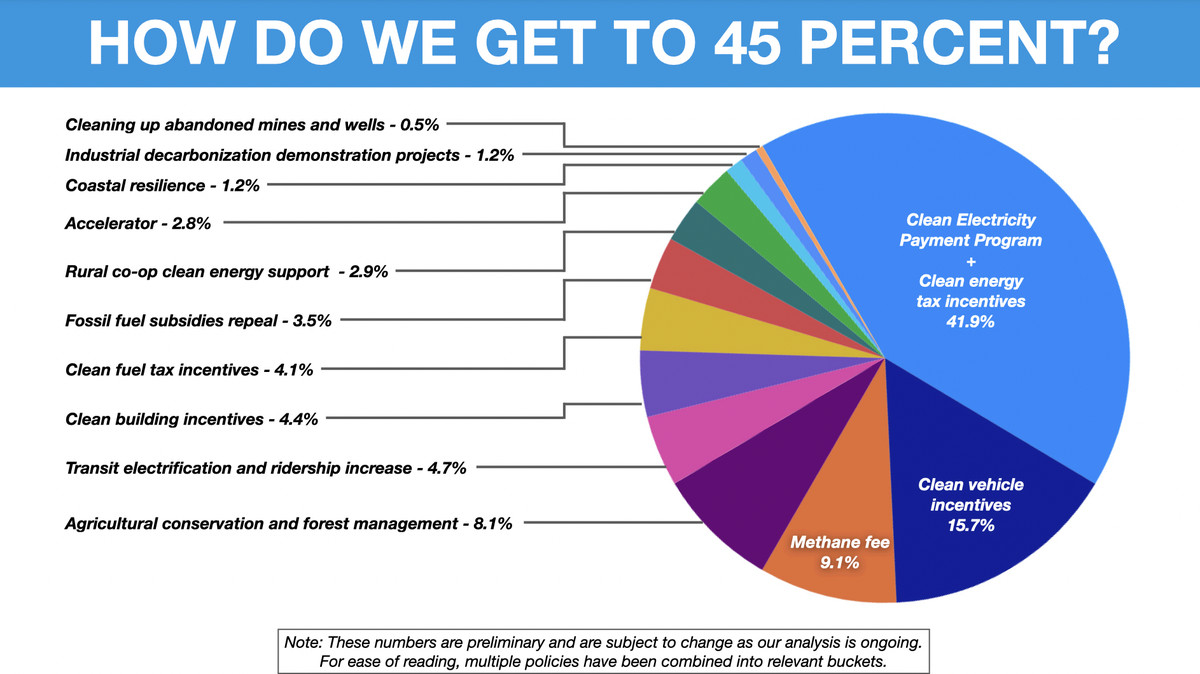 A time when the United States runs mostly on wind- and solar-powered electricity could be a reality in only a few years. It wouldn’t require any scientific breakthroughs or technological leaps for clean energy to overtake coal and natural gas, which still dominate 60 percent of the US power sector. What it would take to challenge a century of fossil-fuel dominance in record-breaking time is one sweeping, underappreciated policy: a clean electricity standard.

This policy could be “the biggest change in our energy policy since the lights went on,” Minnesota Sen. Tina Smith told Vox in a July interview. She called it the “centerpiece” of Democratic climate policy under President Joe Biden.

This potentially game-changing policy is now inching closer to becoming law. The US House of Representatives on Tuesday approved the outlines of a $3.5 trillion budget that includes at least $150 billion for a clean electricity standard. If the proposed budget survives negotiations in the coming weeks, it could solidify some of the Biden administration’s most ambitious climate goals — most of which were stripped out of the bipartisan infrastructure deal that the Senate passed on August 10.

One way to understand why this relatively arcane policy is now center stage is to consider what happens without it. Millions of consumers have electrified their cars and appliances, and many cities and states are electrifying public services such as public transportation — but these activities still draw most of their charge from dirty power plants. The electricity sector has slowly been cleaning up its act, and is now powered by around 20 percent solar and wind and around 20 percent nuclear.

But this summer of climate disasters is a vivid reminder that the transition can’t come soon enough. Yes, Americans have increasingly adopted solar panels to save money, while 30 states and more than 100 cities have adopted clean electricity targets — most ambitiously, Oregon’s recent passage of a goal of 80 percent reduction in power emissions by 2030. Still, these actions and uneven state progress don’t match the pace that’s needed to slow catastrophic warming across the planet.

A clean electricity standard is a bit of a misnomer because the actual policy being discussed is even more boring-sounding: a clean electricity payment program that pays utilities to clean up their act and fines them for missing deadlines. Still, this approach could effectively double the amount of wind and solar on the market, moving the nation toward roughly 80 percent renewable sources of electricity by 2030, and within reach of 100 percent clean electricity by 2035. It’s critical to getting the US halfway to Biden’s pledge under the Paris climate agreement.

The clean energy transition — which has perhaps prematurely been called a “revolution” — has made progress in “an incremental, disjointed way” until now, said Pam Kiely, a climate expert at the Environmental Defense Fund. She says Washington is finally recognizing the urgent need for “binding requirements that ensure you get the outcomes you want.”

Do the math, climate experts say, and there’s no way to tackle the climate crisis without cleaning up the electricity sector.

Two of the biggest ways Americans contribute to climate change are their transportation and electricity usage. You might cut your carbon footprint by making your home more efficient, installing a solar panel, and even buying an electric car — and the power that flows from your outlet is a lot cleaner than it was a decade ago. But coal and natural gas, more often than not, are still the status quo. This reality limits the impact of well-meaning actions: A coal-fired power plant may be charging your Tesla, and gas might be powering your office’s air conditioning.

“If we’re electrifying cars so they don’t rely on oil, and electrifying buildings so they don’t leach gas, then what they rely on can’t be just as dirty as what’s been replaced,” said Sam Ricketts, a senior adviser for the climate group Evergreen Action.

If you live in one of the states that has adopted its own clean electricity standard, that power may be getting cleaner: 345 coal plants have retired in the past decade or will soon retire across the country, according to the Sierra Club. That still leaves 185 active coal plants operating in the country — and, worryingly, about 250 new gas plants planned for construction over the next 20 years. By making it economically impossible to keep coal plants up and running, a clean electricity standard could push coal to zero and slow the growth of natural gas.

“By cleaning up our power sector, we can have a dramatic impact on carbon emissions,” Smith said. “And when we combine that with other policies to electrify transportation, and to electrify building heating and cooling, it has a multiplier effect throughout the whole economy.”

The biggest short-term benefits aren’t even about climate change. Continuing to cut coal also slashes the country’s air pollution, like the ozone and particulates that damage people’s lungs and hearts. These gains would easily dwarf what the Environmental Protection Agency has accomplished under previous presidents because it would close more coal-powered plants than even President Barack Obama’s most effective environmental regulation, the mercury and air toxins rule.

And then there are the lives saved, according to research from Harvard University: By 2030, the policy would save 9,200 lives because of the sudden cut in air pollution. Over the next 30 years, that number grows to 317,500 lives saved.

For those who think about the benefits in dollars, a clean energy transition would create 500,000 to 1 million net new jobs over the course of the 2020s, according to a study from Princeton’s Andlinger Center for Energy and the Environment. “Job losses in extractive fossil industries are more than offset by an increase in construction and manufacturing in the clean energy sector,” the study found. Cutting air pollution also translates into the equivalent of $1.7 trillion in benefits from reduced health care costs, economic productivity, and lives saved, according to the climate think tank Energy Innovation.

We know roughly what a clean energy standard would look like, based on a blueprint from Senate Majority Leader Chuck Schumer that was shared with reporters in July.

The vision environmentalists have pushed for, and Smith has supported, would reward utility companies for adopting clean energy — hence the roughly $150 billion price tag — and fine them for missing targets. It’s a carrot-and-stick approach to prioritize wind and solar over coal and gas, staying on schedule with rising targets every year. The aim is to reach 80 percent clean energy by 2030.

Biden initially wove many of his ambitious climate policies into a single large infrastructure proposal, which was then split into two parts — one bipartisan bill that needed 60 votes to avoid a filibuster, and one maneuver known as reconciliation that allows Democrats to pass a budget with a simple majority vote.

Some media outlets have called the new reconciliation agreement a “social spending plan,” but that label downplays the important climate policies it contains. On Wednesday, Schumer’s Senate office released its own analysis of how the trillion-dollar infrastructure package and $3.5 trillion reconciliation budget would cut climate pollution. The clean electricity standard, combined with a decade’s worth of clean energy tax credits, had the biggest impact by far, according to Schumer’s office.

Combined with other climate-friendly policies, like electric vehicle investments and a price on methane pollution, these pieces of legislation could spur a 45 percent reduction by 2030 (compared to 2005 pollution levels). Add in state action and Biden’s executive powers, and Schumer says “we will hit our 50 percent target by 2030” that the president has promised. Schumer’s office did not immediately respond to questions about its methodology.

That’s just a framework, though, and these numbers could change significantly. It’s still too early to know whether Republicans and moderate Democrats will fight the clean electricity standard, as they have with some of Biden’s other climate ambitions — arguing, for example, that the federal government shouldn’t pick winners and losers in the private sector, or that such policies are an inefficient use of taxpayer funds. Key Senate Democrats, critical to the final vote, have at times been skeptical of the reconciliation bill’s overall cost.

Ricketts, with Evergreen Action, dismissed concerns over the price tag. “We know there’s a cost to this energy transition,” he said. He argues that if the federal government doesn’t step up, those costs could instead end up in consumers’ energy bills.

“If we want to make the clean energy transition happen, we need to ensure investments reach every region and benefit every community,” Ricketts adds. He calls the clean energy proposal “a progressive, job-creating policy to drive an effective clean electricity transformation over the coming decade.”

Even among supportive congressional Democrats, there’s some debate over how to account for fossil fuel plants that promise to capture and store their pollution, and how to treat natural gas, which still contributes to climate change but accounts for less carbon pollution than coal. Many environmental groups have called carbon capture and natural gas “false solutions” to climate change.

Since the US rejoined the Paris climate agreement in the early days of Biden’s presidency, Democrats have had an added incentive to pass lasting climate policies. To prove that their agenda won’t unravel in a few years if the next president is a climate change denier, the United States could show up to the next major international climate change conference — held in Glasgow this fall — with a freshly minted budget that moves the country toward 100 percent clean energy. Or it could show up empty-handed, without a serious plan for getting to Biden’s target of a 50 percent cut in overall climate pollution by 2030.

Democratic leaders acknowledged as much in a press conference last month. “My great hope is that we go to Glasgow with a great climate bill that will demonstrate our commitment to our Paris objectives,” said California Rep. Mike Levin, one of 134 House representatives who signed on to a letter calling for 100 percent clean electricity by 2035.

Update, August 25: Updated to include the budget passing the House and new analysis from Majority Leader Schumer’s office.