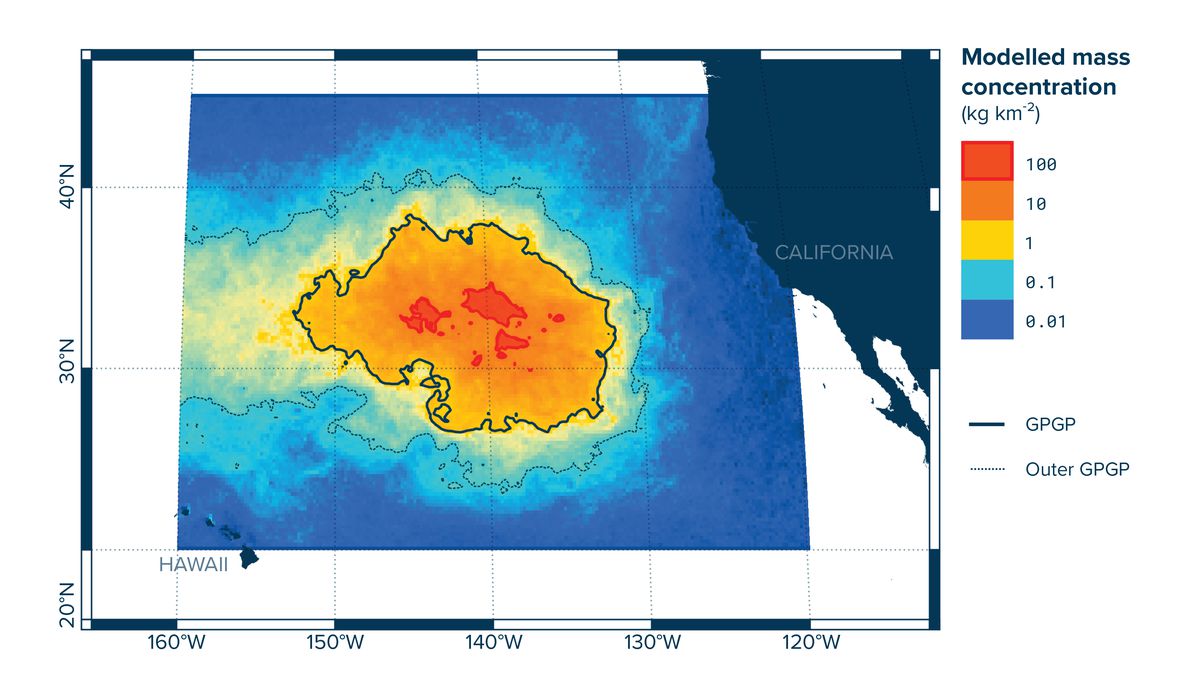 Last month, a group of marine biologists noticed something fishy in a video posted on Twitter by a nonprofit called The Ocean Cleanup. “This is likely a staged video,” Clark Richards, a scientist at the Bedford Institute of Oceanography, wrote. “I call bullshit.”

In the 25-second clip, a large net appears to dump 8,400 pounds of plastic waste, including crates, buckets, and fishing gear, onto the deck of a ship. The Ocean Cleanup, which has raised more than $100 million on the promise to rid plastic from the seas, said the trash in the video was just pulled from the Great Pacific Garbage Patch — an infamous region in international waters, between California and Hawaii, that’s polluted with plastic waste.

Richards and several other marine biologists quickly challenged the group’s claim. On Twitter and in media reports, they said that the plastic looked too clean to have been floating for a while in the ocean. There should have been a more visible build-up of marine organisms like algae and barnacles. In response to those allegations, The Ocean Cleanup explained that water in the garbage patch lacks nutrients that marine life needs to grow and shared other reasons why the plastic looked so clean (which some biologists again rebuffed).

On its face, The Ocean Cleanup’s approach to solving one of the hardest environmental problems appears to be a worthy one. But the whole squabble raises a bigger question about cleaning up plastic in the open ocean: Is it even a good idea to begin with?

Everyone can agree that plastic waste is a scourge. Between 2000 and 2019, plastic production worldwide doubled, reaching 460 million metric tons — and only a small fraction of that gets recycled. The rest is burned, buried, or ends up in the environment, including the sea. Some estimates suggest that by 2050, there could be more plastic in the oceans, by weight, than fish.

But some scientists think that cleaning up the open ocean is a futile, and perhaps even harmful, endeavor. Several marine biologists told Vox that existing methods, including The Ocean Cleanup’s strategy, are inefficient and often produce pollution themselves. Plus, this approach can kill sea creatures — the very animals these efforts are ultimately trying to protect.

Ocean cleanups also do little to address the core of the issue: our dependence on plastic and the steady stream of waste it produces. “It’s like mopping up the spill when the spigot is still on,” Katie Matthews, chief scientist at the nonprofit advocacy group Oceana, told Vox. “We can’t clean up our way out of plastic pollution.”

With a challenge so large, and at a time when climate change and commercial fishing are also threatening marine life, it might seem unwise to shoot down any ideas that could help. But marine scientists told Vox that there are plenty of other solutions that are far more effective — or at least, less controversial — than open ocean cleanups.

The problem with cleaning up the open ocean starts with a pervasive misconception — that there are enormous blobs of trash floating out at sea just waiting to be scooped up. News stories in the 2000s popularized this idea by referring to the Great Pacific Garbage Patch as an “island” of trash. Even today, a Google search of the “patch” reveals images of large expanses of floating waste.

The so-called patch isn’t so much an island as it is a soup, however, in which broken-down bits of plastic are like pepper flakes. Much of the waste is pea-sized or smaller and floats below the surface. That explains why, when you’re there, “it just looks like ocean,” said Melanie Bergmann, a marine biologist at the Alfred Wegener Institute for Polar and Marine Research in Germany, who last visited the region in 2019. The same is true for a handful of other marine garbage patches, which form around gyres — systems of rotating currents.

This is one reason why ambitious ocean cleanup efforts are often inefficient, said Richards, the marine scientist at the Bedford Institute of Oceanography; the large pieces of plastic are spread out and much of the rest is impossible to retrieve. Plus, only about 1 percent of the plastic we dump into our oceans ends up in these kinds of patches (it’s still somewhat of a mystery where the rest goes). So even if ocean cleanups were more efficient, they wouldn’t make a significant dent in the overall waste problem.

Some scientists are also concerned that ocean cleanups could even make certain environmental problems worse.

The Dutch inventor Boyan Slat founded The Ocean Cleanup in 2013, when he was 18. Since then, the organization — which counts Salesforce CEO Marc Benioff and tech billionaire Peter Thiel as funders — has tested a few different devices to retrieve waste from the garbage patch. Most of them didn’t live up to the hype.

Today, the organization collects plastic by dragging a shallow net between two large ships. According to Matthews and Richards, the method is not unlike trawl fishing, and so it faces the same problem of bycatch — marine life caught by accident.

It’s hard to collect free-floating plastics without ensnaring fish, turtles, and other animals, said Bergmann, who did her PhD dissertation on bycatch. These creatures often die, even if they’re thrown back into the water, she added. Some scientists also worry that open ocean cleanups harm the organisms that make up an ecosystem right below the ocean’s surface.

Matthias Egger, a scientist at The Ocean Cleanup who has a PhD in marine biogeochemistry, told Vox that the group’s approach is “the complete opposite of fishing.” The net is shallow and moves slowly, so that fish can pass underneath it, and there are escape hatches if they get caught, he said. “The main reason why we do what we do is to help marine life,” he added.

The Ocean Cleanup has consulted fishers to make a system that doesn’t catch sea life, he said, noting that it’s still in the research and development phase. However, the group said it has caught a small amount of marine life in its nets before, including sea turtles (which may have been dead before entering the net).

Some marine scientists also point out that using large ships that run on fossil fuels to drag nets through the water pollutes the air and the climate. Two vessels operated by The Ocean Cleanup, for example, release 600 metric tons of carbon dioxide for a month of cleanup, according to the nonprofit — equivalent to about 130 cars on the road for a year. Egger said The Ocean Cleanup aims to develop a system that doesn’t need to be towed by large vessels. Until then, the group says it will offset its carbon emissions and work with its shipping partner, Maersk, to develop more sustainable fuels.

Ridding the sea of plastic with an approach that burns fossil fuels — which are, themselves, used to make plastic — raises additional questions about efficiency, Matthews said. Why not put that investment into something like beach cleanups? “People walking up and down a beach has no carbon footprint,” she said. “The return on investment is much higher.”

Egger agrees that beach cleanups are valuable, but says that conservation isn’t a zero-sum game. Funding The Ocean Cleanup doesn’t necessarily siphon away money away from other projects, he said. Plus, he added, there’s more value in removing plastic in the ocean, where it’s already harming sea life, than picking it up on the beach.

Ultimately, solving the problem of plastic waste requires that companies produce and use less plastic, experts said. Single-use plastics like bags and takeout containers — which have boomed during the pandemic — should be the first to go, Matthews said. “We have decided to use something that lasts forever for something we only need for five minutes,” she said.

Governments around the world have been making progress. Many US cities, including New York and Chicago, ban or tax plastic bags. The European Union went as far as banning single-use plastics outright last summer. And just this week, delegates of the United Nations began working on a global treaty to eliminate plastic waste. “We have seen tremendous progress on negotiations toward an internationally legally binding instrument to end plastic pollution,” the executive director of the UN environment program, Inger Andersen, said in a February 28 statement.

Even if successful, the most ambitious efforts to limit plastic production won’t happen overnight, so there’s still a place for cleanups. “I don’t think that anyone would tell you that you should never pick up trash,” Richards said.

Most researchers agree that coastal cleanups are effective. In 2020, volunteers removed 5.2 million pounds of plastic from beaches around the world in a single day. Perhaps the most beloved solution, however, is Mr. Trash Wheel. Floating in the mouth of the Jones Falls river in Maryland, it’s a simple machine that intercepts waste heading for Baltimore’s Inner Harbor. (Mr. Trash Wheel is something of a celebrity in the DC-Baltimore area and part of a “family” of similar trash wheels in the region.)

“There are lots of low-tech tools that get plastic before it reaches the ocean,” said Miriam Goldstein, director of ocean policy at the Center for American Progress, who studied the garbage patch as a graduate student (and has previously criticized The Ocean Cleanup). “Those are highly effective and efficient and cheap.”

Nicholas Mallos, senior director of the Ocean Conservancy’s Trash Free Seas program, agreed. While there’s “absolutely a role for technology,” he said, the science is increasingly showing that removing plastic from rivers and coastal areas is the best and most efficient approach to reducing plastic waste.

The Ocean Cleanup deploys similar river trash collection systems, but the group still sees a place for cleaning up the open ocean. Even if we rid beaches and rivers of plastic, Egger said, there will still be waste floating out at sea and harming marine life. “We should work together on solving this rather than having these arguments,” he said.