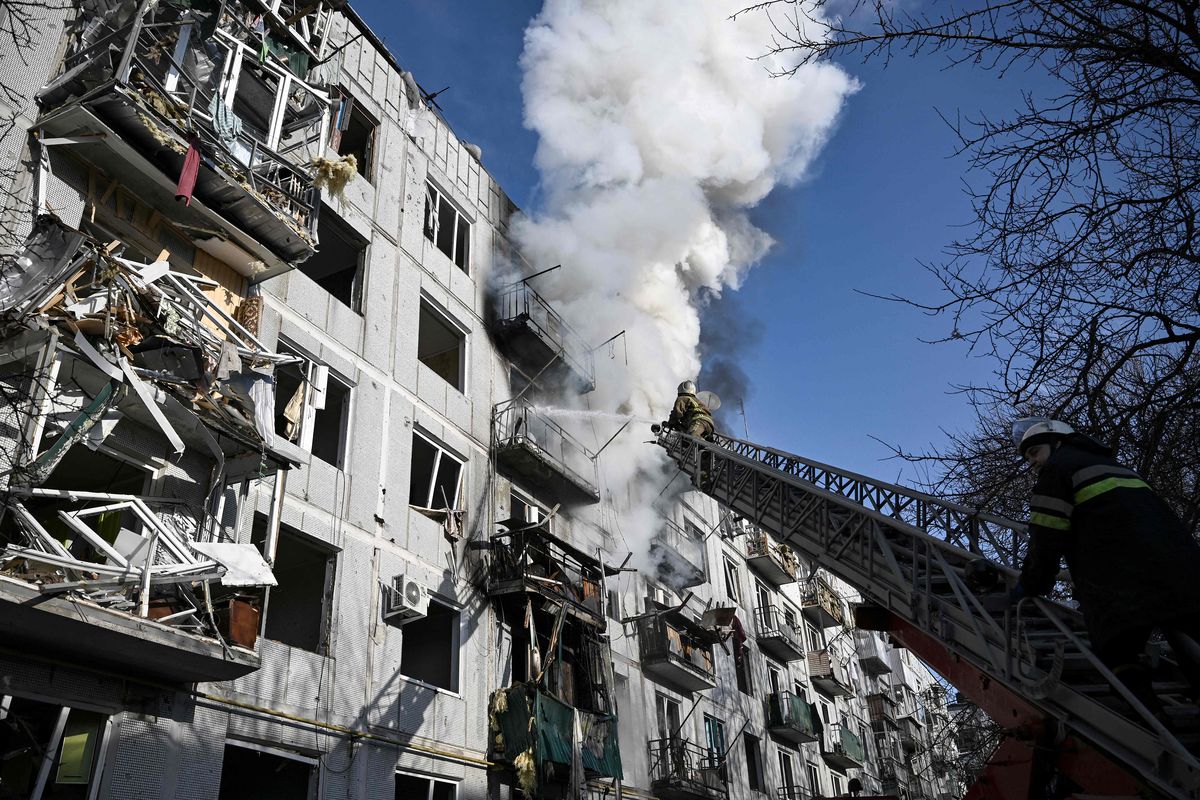 As Russian bombs pound Ukraine, and its soldiers pour into Ukrainian territory, the question on everyone’s mind is: Why? What does Russia hope to accomplish with a massive invasion?

Russian President Vladimir Putin gave his version of an answer in his televised speech Wednesday night, announcing a “special military operation” whose “goal is to protect people who have been abused by the genocide of the Kyiv regime for eight years.” Ultimately: “We will strive for the demilitarization and de-Nazification of Ukraine, as well as bringing to justice those who committed numerous bloody crimes against civilians.”

On its face, this sounds detached from reality. There is no ongoing genocide in Ukraine. While there are government-aligned fascist militias in Ukraine, ones that have risen in influence since the pro-Western Euromaidan uprising in 2013, the Ukrainian government itself is not even close to a Nazi regime. The country’s president, Volodymyr Zelensky, is Jewish; he speaks proudly of how his Jewish grandfather fought against Hitler’s army.

But with this seemingly absurd rhetoric, Putin is laying the propaganda groundwork for the overthrow of Ukraine’s government.

“It is a military operation with maximalist war aims, whose [ultimate] aim is regime change,” writes Michael Kofman, director of Russia Studies at the CNA think tank.

US intelligence has warned that Putin aims to topple Ukraine’s government, round up prominent Ukrainians “to be killed or sent to camps,” and install a puppet regime in Kyiv. When Putin speaks of “de-Nazification” and “bringing [Ukrainians] to justice,” this is exactly what he means.

The word “demilitarization” hints at the real reasons he’s willing to do this: that he wishes to end Ukraine’s status as an independent sovereign state.

“Ukraine might have remained a sovereign state so long as it had a pro-Putin government,” says Seva Gunitsky, a political scientist at the University of Toronto who studies Russia. “Reuniting the lands formally would probably not have been at the forefront of the agenda if Putin felt he had enough political support from the Ukrainian regime.”

So talk of “de-Nazification,” while absurd on a factual level, is nonetheless revealing. It tells us that Putin is acting on his long-held belief that the Ukrainian government has no right to be independent. It hints at his ultimate goal: to transform Ukraine into a vassal of a new Russian empire.

Putin has laid out key elements of his thinking in statements over the years, ranging from a 2005 declaration that “the collapse of the Soviet Union was a major geopolitical disaster” to a 5,000-word essay on Ukrainian history published last year. But his most relevant formulation, for the purposes of understanding the current invasion, came in an inflammatory speech on Ukraine policy delivered on Monday.

The speech was ostensibly a justification for his decision to recognize the independence of pro-Russian secessionist regimes in the eastern Ukrainian provinces of Donetsk and Luhansk. But it was also a lengthy disquisition on nationalist grievance, one that Russia experts widely saw as an authentic guide to his motivations during the Ukraine crisis.

“I am convinced that Putin was ‘speaking from the heart,’” says Alina Polyakova, the president of the Center for European Policy Analysis think tank.

The central contention of the address is that Ukraine and Russia are, in historical terms, essentially inseparable.

“Ukraine is not just a neighboring country for us. It is an inalienable part of our own history, culture and spiritual space,” he said, per the Kremlin’s official translation. “Since time immemorial, the people living in the south-west of what has historically been Russian land have called themselves Russians.”

What we now call Ukraine, he says, “was entirely created by Russia or, to be more precise, by Bolshevik Communist Russia.” In this questionable narrative, a trio of early Soviet leaders — Lenin, Stalin, and Khrushchev — carved land away from Russia and several nearby nations to create a distinct and ahistorical republic called Ukraine. The creation of Ukraine and the other Soviet republics was an attempt to win the support of “the most zealous nationalists” across the Soviet Union — at the expense of the historical idea of Russia.

In the speech, he uses a revealing metaphor on these issues: “the virus of nationalism.” Ukrainian nationalism, in his view, is an infection introduced to the Russian host by the Bolsheviks; when the Soviet Union collapsed, and republics from Ukraine to Estonia to Georgia declared independence, the virus killed its host.

Putin’s narrative is twisted history: It is simply incorrect to say that Ukraine has no independent national identity separate from Russia. “Putin is no historian,” Timothy Snyder, a Yale University historian of Eastern Europe, writes in the Financial Times.

Regardless, Putin does see the former Soviet republics — and, above all, Ukraine — as parts of Russia wrongly wrenched from the motherland. As a result, he cannot see post-Soviet Ukraine as a real country; in his view, it has no real history nor national tradition to unite it. Instead, he sees it as a playground for oligarchs who deploy anti-Russian demagoguery as a smokescreen for their corruption.

“The Ukrainian authorities — I would like to emphasize this — began by building their statehood on the negation of everything that united us,” he says.

Russian control over Ukraine, he argues, has been replaced by a different kind of foreign rule: that of the West. After the 2013 Euromaidan protests, which toppled pro-Russian leader Viktor Yanukovych, “Ukraine itself was placed under external control … a colony with a puppet regime.”

The implication of this historical narrative is that the Ukrainian government, in its current form, is illegitimate and intolerable.

It is illegitimate because Putin views Ukraine as a rightful part of Russia separated purely by an accident of history. It is intolerable because Ukraine’s government seeks to legitimate itself by courting conflict with Russia, both oppressing its native Russian speakers and menacing Russia’s borders. In his mind, a pro-Western Ukraine could serve as a launching pad either for a NATO invasion of Russia or, somewhat more plausibly, a CIA-backed popular uprising against his regime.

So there is, in Putin’s mind, a seamless connection between Russian nationalism and Russian security interests. Putin believes that the current Ukrainian government threatens Russia for reasons bound up in their imperial past; restoring Russian control over territories that he believes it rightfully owns would be one way of ending the threat.

This thinking is most clearly on display in the most ominous line in Putin’s speech, one that we can now clearly read as a promise to invade Ukraine.

“You want decommunization? Very well, this suits us just fine. But why stop halfway? We are ready to show what real decommunization would mean for Ukraine.”

With this history in mind, it’s possible to make sense of Putin’s seemingly unhinged ranting about genocide and the de-Nazification of Ukraine. For starters, the idea of Ukraine as a Nazi state is deeply rooted in the Russian nationalist narrative.

“It goes back to World War II, [when] Ukrainian partisans took the Nazi side against the Soviets,” Gunitsky explains. “The narrative in Russia [today] is that these are all neo-Nazis running the show.”

Putin is wrapping this history into his basic idea that Ukraine is not and cannot be a legitimate sovereign state. Ukraine is not merely a historically Russian territory wrongly severed; it is the inheritor of a neo-Nazi tradition that contributed to untold Russian deaths during World War II.

Similarly, Putin’s claims of “genocide” in Ukraine reflect Russian nationalism. Ukraine has a large ethnic Russian population, especially in the East, and many Ukrainians of all ethnicities speak Russian. In Putin’s paranoid telling, these people are not merely rightful Russian citizens wrongfully separated from the motherland; they are potential victims of an ethnic cleansing campaign by the neo-Nazi Ukrainian government.

“The formation of an ethnically pure Ukrainian state, aggressive towards Russia, is comparable in its consequences to the use of weapons of mass destruction against us,” as he put it in his 2021 essay. “As a result of such a harsh and artificial division of Russians and Ukrainians, the Russian people in all may decrease by hundreds of thousands or even millions.”

There is a small amount of truth in this hyperbole. The Azov Battalion, a neo-Nazi militia, played an important role in fighting Russia’s invasion of eastern Ukraine in 2014; since then, it has been integrated into the Ukrainian national guard. Ukraine’s government has pushed to make Ukrainian the country’s dominant language. Many ethnic Russians — though by no means all — would rather live under Moscow than Kyiv.

But there is an ocean of difference between these real concerns and hyperbolic claims that Ukraine is a neo-Nazi state committing genocide against ethnic Russians.

In Ukraine’s 2019 national election, a far-right political alliance including Azov’s political arm only received 2 percent of the vote. There is no evidence that Zelensky’s government is engaging in large-scale extermination of Russians; no international human rights group nor credible expert has made such a claim.

But while Putin’s arguments may be unserious, the implications of them for Russian policy are deadly.

By casting the Ukrainian regime in the most negative possible light — and officially linking Russia’s official war aims to “de-Nazification” and “demilitarization — he is all but openly turning his stated belief that Ukraine is not a legitimate sovereign state into action, making a veiled threat to remove its leadership and permanently end its military capacity. No sovereign state could accept that. The invasion aims to defeat Ukraine utterly, to force its surrender and submission to the Russian yoke.

The case for the war is built on lies, both about Ukraine’s history and its present. But the Russian policy is coherent: It aims toward turning Putin’s maximalist vision for a Ukraine returned to the Russian fold into reality. Whether Russia can accomplish that — and the price that ordinary Russians and Ukrainians pay for it — remains to be seen.