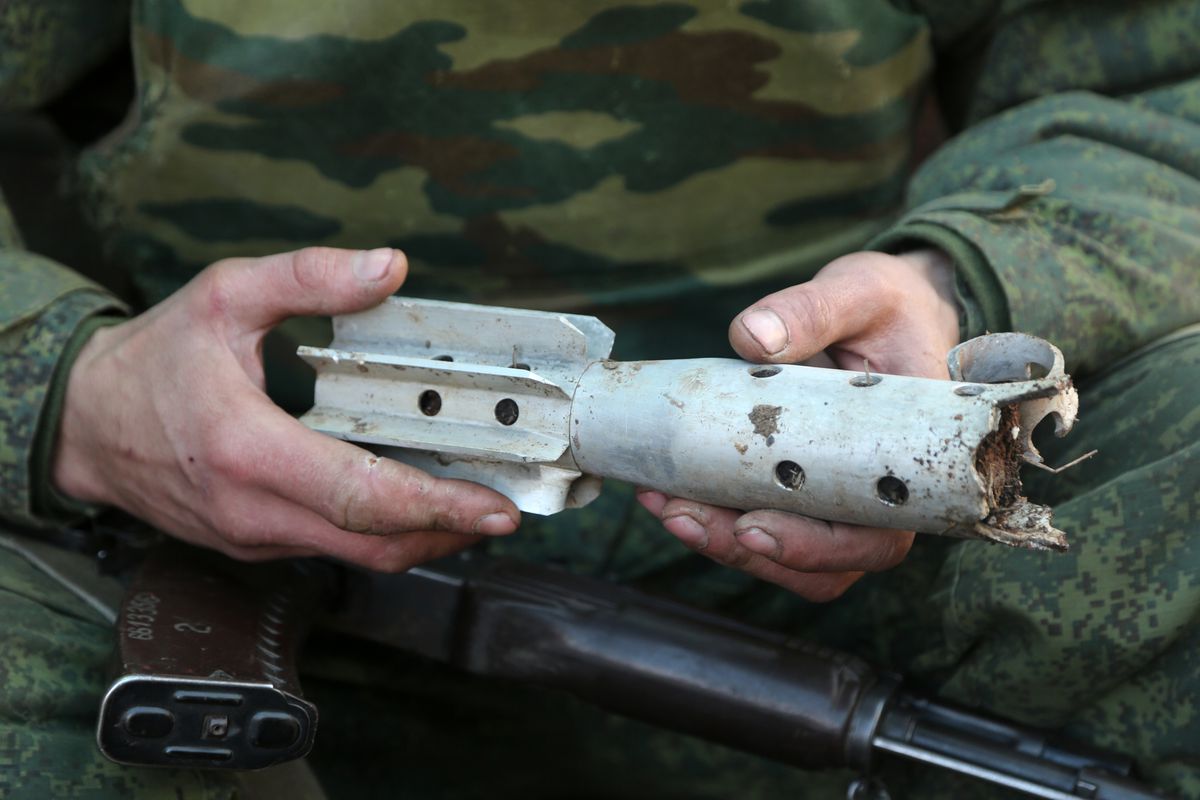 Russian President Vladimir Putin has ordered troops into two Ukrainian regions held by Russian-backed separatists, a dramatic escalation that threatens to spiral out into a larger conflict.

Putin had amassed some 190,000 troops near the Ukrainian border and appeared to be making preparations for war. His decision Monday violates principles of international law, but isn’t yet being treated by the West as an invasion that the US promised would trigger a “massive” package of sanctions.

The question now is whether this is a preface to a much larger invasion of Ukraine.

Though Russia hasn’t yet staged the large-scale land invasion that the Biden administration has been publicly warning about for several days, a dizzying series of developments over the weekend showed how the window for a diplomatic outcome has narrowed. After days of fabricated claims of Ukrainian aggression, on Monday Putin delivered a combative, hour-long speech on Ukraine, which essentially denied Ukrainian statehood and portrayed NATO as a direct threat to Russia.

In his speech, Putin recognized as independent the so-called Luhansk People’s Republic and the Donetsk People’s Republic, two territories in eastern Ukraine where he has backed separatists since 2014. “Otherwise, all responsibility for the possible continuation of the bloodshed will be entirely on the conscience of the regime ruling on the territory of Ukraine,” Putin said. “Announcing the decisions taken today, I am confident in the support of the citizens of Russia. Of all the patriotic forces of the country.”

Soon after, Putin announced the deployment of troops for “peacekeeping operations.”

Most experts Vox spoke to said this looks like the beginning, not the end, of Russia’s incursion into Ukraine, although it is impossible to predict events with certainty. Russia’s declaration of independence for the breakaway territories, and the move of peacekeeping forces into that territory, “sets the stage for the next steps,” said Michael Kofman, research director in the Russia studies program at CNA, a research organization in Arlington, Virginia.

“In Russia, [it] provides the political-legal basis for the formal introduction of Russian forces, which they’ve already decided to do,” he said. “Secondarily, it provides the legal local basis for Russian use force in defense of these independent Republic’s Russians citizens there. It’s basically political theater.”

What Russia does from here on out is likely to determine how the United States and its NATO allies respond to Russia’s actions. The White House has promised severe sanctions for a Russian invasion, but so far the US and European allies have just sanctioned the two breakaway regions.

Russia has tens of thousands of troops along different parts of the border with Ukraine. It is a force capable, and in position, for a much larger-scale operation. “Russia did not need to amass 190,000 troops in order to just recognize the independence of Donetsk and Luhansk,” said Natia Seskuria, an associate fellow at the Royal United Services Institute.

In 2014, Russia annexed Crimea and invaded eastern Ukraine, backing pro-Kremlin separatists in the regions of Luhansk and Donetsk in a conflict that has simmered for years and killed at least 14,000.

Shelling from the Russian-backed separatist side of the border intensified in recent days, with separatist leaders blaming Kyiv — without evidence — for the fighting, and calling on its residents to evacuate. By Monday, Putin had called a meeting with his security council to discuss the situation, then hours later declared these breakaway regions independent, sending in forces for what he described as a “peacekeeping” mission.

Olga Lautman, a senior fellow at the Center for European Policy Analysis, described this as an invasion. But she also said that it was likely a distraction — laying a foundation for more steps to come. Rep. Liz Cheney tweeted, “Russia has invaded Ukraine,” and Michael McFaul, who served as Obama’s ambassador to Russia, said the same.

Kofman, of CNA, described it as a “renewed invasion,” building on what happened in 2014 and 2015. Analyst Anatol Lieven of the Quincy Institute for Responsible Statecraft wrote, “This would fall far short of invasion. It would mark only a limited escalation in the conflict that has been going on in the Donbas since 2014.”

It’s unclear if this escalation will lead to Russian troops directly engaging Ukrainian ones, or what will happen on the ground in these declared independent regions in the coming days.

But this distinction of what is and isn’t an invasion matters, as it will direct how the United States and its allies will respond. On Monday evening, the White House issued an executive order with sanctions against those doing business in the breakaway republics. But the US has yet to call recent developments an “invasion,” and in summaries of President Joe Biden’s calls with European leaders, the White House described the events as an “ongoing escalation along the borders of Ukraine” and a “clear attack on Ukraine’s sovereignty and territorial integrity.”

A White House official told reporters that while the administration did not yet rule out more severe sanctions, it will “assess what Russia does and not focus on what Russia says.”

The world has been closely watching Russia’s troop movements on the Ukrainian front since November. Late last year, Moscow issued the United States a series of demands. They included some big asks, including a guarantee against Ukraine’s eventual NATO membership and a commitment for NATO to roll back some of its troop deployment in countries recently admitted to the alliance. These were nonstarters for the US and its allies, as they would effectively give Russia veto power over the alliance’s decisions — and over European security.

Still, diplomatic efforts followed, with the US and Russia negotiating for most of January, and European and US leaders cycling through Ukraine and Moscow. Even as these efforts took place, Russia’s mass mobilization of soldiers around Ukraine in recent weeks has signaled Putin’s interest in maintaining the option of a full-fledged land war in Europe.

The reasons for this conflict are complex, rooted in post–Cold War history and Russia’s 2014 invasion of Ukraine, and raise larger questions about the place of the US and Russia in the 21st century.

NATO’s eastward expansion to former Soviet republics on the Russian border since the Cold War ended hasn’t helped. Biden’s CIA director, William Burns, who served as ambassador to Russia from 2005 to 2008, had predicted that giving Ukraine NATO membership would “create fertile soil for Russian meddling in Crimea and eastern Ukraine.” (Ukraine isn’t part of NATO and was not expected to join anytime soon, but the country has deepened cooperation with the West since 2014).

But Putin has dismissed Ukrainian sovereignty entirely. In Monday’s speech and in a July 2021 essay, he claimed Ukraine is part of a “unified state” with Russia. The decision to move troops in doesn’t mean Russia is officially annexing Donetsk and Luhansk — yet — but it does escalate efforts to pull the country back into Moscow’s orbit.

Previously, Russia’s plan had been to pressure Ukraine to adopt the 2015 Minsk Agreement that would allow Ukraine to regain formal control over the Donbas rebel-held areas in return for granting their proxies an outsize role over decision-making in the capital of Kyiv, said Samuel Charap, a senior political scientist at the RAND Corporation.

Putin’s actions on Monday signaled a new direction. “Today, [Russia] declared the Minsk agreements dead completely, which means that the era of Russia trying to achieve its objectives through a negotiated return of the Donbas is over,” Charap said. “It means they’re about to get to establish their influence through the use of force.”

Putin is likely one of the only people who knows what comes next. But the diplomatic pathways out of this conflict are closing rapidly, and experts say that Putin looks to be building a pretext he may need to carry out a more robust attack on Ukraine — possibly going so far as threatening the capital of Kyiv. This is the worst-case scenario that the White House has warned about: a war that would cost tens of thousands of lives and potentially spur a mass refugee crisis.

Putin’s escalation in eastern Ukraine occurred the day after French President Emmanuel Macron spoke with the Russian leader for hours, which seemed to point to a possible diplomatic out — specifically, an agreement “in principle” for a summit between Presidents Biden and Putin, after Secretary of State Antony Blinken and Russian Foreign Minister Sergei Lavrov were scheduled to meet Thursday. Russia’s latest actions almost certainly have jeopardized any sort of high-level summit, said Rajan Menon, director of the Grand Strategy program at Defense Priorities.

Ukrainian President Volodymyr Zelensky said in an address Monday that Putin’s incursion was a violation of the country’s “national integrity and sovereignty.”

Ukraine, though, doesn’t have many options. The Ukrainian army, if it returns fire, risks giving Russia the exact pretext it would need to attack. And experts noted that Russia is already trying hard to manufacture the evidence for that pretext, with or without Ukrainian involvement.

That all feeds into Putin’s recent moves, and what he might do next. Putin’s formal recognition of the independence of the two breakaway regions in eastern Ukraine created a justification for a formal military presence in the area. Moscow has been circulating fake videos on Russian state media of alleged Ukrainian attacks. Even if some of these videos are poorly produced, US intelligence officials and experts have repeatedly suggested Russia might attempt to manufacture a “false flag” attack as a provocation to justify more robust military force.

“By recognizing the independence of Russian-occupied Ukrainian territories, Donetsk and Luhansk, the Kremlin has laid the foundations for its ambition to achieve main goals of the regime change and erasing the Ukrainian sovereignty, hence the return of Ukraine into Russia’s sphere of influence,” Seskuria, of RUSI, said.

That hasn’t happened yet. But the question is what — if anything — could move Putin from a course toward a takeover.

As Biden himself noted in 2018 while speaking about Russia at the Council on Foreign Relations, “My dad had an expression, ‘Never back a man in a corner whose only way out is over top of you.’ Well, you know, take a look at Russia now. Where do they go?”