Search Party found enlightenment in the doomsday cult of fandom 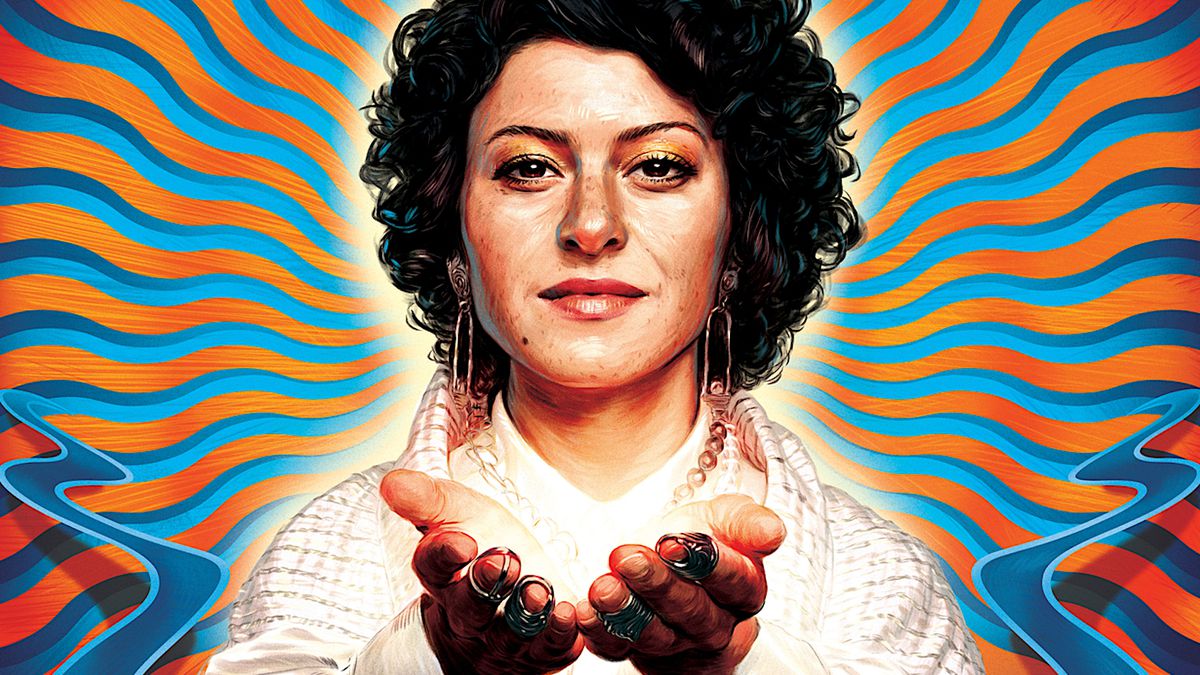 In Search Party’s final season, the comedic-detective-mystery-turned-Hitchcockian-stress dream-turned-courtroom-procedural-turned-psychological thriller reaches its ultimate form with a story about cults, fandom, and the power of parasocial relationships.

Search Party’s fifth season works well enough on its own. But to understand the significance of the show putting its cast of unhinged narcissists on journeys of spiritual enlightenment and how that turns them all into the horsemen of the apocalypse, you really have to recall a few key points from earlier in the series.

This post contains major spoilers for Search Party season five, and you should probably watch it before reading further.

Search Party became deeply existential in its season four finale as Dory Sief (Alia Shawkat) appeared to die in a fire, only to return as something close to, but not quite a ghost in order to attend her own memorial service where her friends Drew (John Reynolds), Portia (Meredith Hagner), and Elliott (John Early) all used their speeches to talk about themselves. Season five picks up just as a very-much-alive Dory comes to in the back of an ambulance, freshly pulled from a burning building and riding the high of the near-death experience she’s just had that merely made her imagine going to her own funeral.

Between Dory’s historically iffy grasp on reality and the fact that she was technically dead for 37 seconds, it’s hard to tell just what to make of her dream funeral and how it ended with four different versions of herself fusing together to become someone new. It’s even harder for Drew, Portia, and Elliott to make sense of the new Dory’s manic, exuberant ramblings about seeing them all at her service and how she’s been given a second chance at life in order to change the world.

While Dory insists that she’s full of nothing but love and light, her friends know from personal experience just how easy it is to get caught up in the orbit of her madness and harmed in the process. That’s partially why it’s easy for them to agree on having her committed to a psychiatric ward. Instead of plowing directly into an obvious One Flew Over the Cuckoo’s Nest parody, Search Party goes the more subtle route and uses Dory’s brief stint at the mental institution to foreshadow many of this season’s stranger twists like her becoming a Legion-like guru figure with a small but steadily growing cult-like following of fans.

Dory’s mental powers are a far cry from David Haller’s, and Search Party only flirts with the idea of the metaphysical at first. But her stay at the hospital unlocks something within Dory that enhances her uncanny ability to channel other people’s emotions — a power that proves to be more than just Search Party having a laugh at the rise of self-identified empaths. It’s easy for Dory to get orderlies and doctors to open up and divulge all sorts of information they know not to share with patients because, in their eyes, she’s not just a patient; she’s Dory Sief, their friend with the knack for listening to people.

Dory is their “friend” to a point, but she’s also a skilled manipulator willing to tell people exactly what they need to hear in order to get what she wants out of them. Whether Dory understands that about herself is one of the more interesting mysteries Search Party digs into this season after she escapes the hospital and starts broadcasting erratic livestreams of consciousness to her sizable media following.

Everyone who watches Dory’s livestreamed ramblings about the enlightenment she wants to share with the world has some familiarity with her past as a suspected murderer. Few of them care, though, because of how enticing her promise of spiritual fulfillment sounds when compared to the monotony of their everyday lives. Portia, Drew, and Elliott experience this first hand when Dory just… shows up, unconcerned about the authorities looking for her but very intent on the four of them hanging and wandering around New York City as a group for old times’ sake.

The more people spend time around Dory, the more difficult it becomes for them to deny that there’s something different about her. It’s enough to convince Dory’s friends that they should all welcome her back into their circle, but it’s also what puts her on the radar of billionaire Tunnel Quinn (Jeff Goldblum), an amalgam of every tech bro villain you’ve seen over the past decade with an extra helping of Musk-y nonsense mixed in for good measure. In Tunnel’s eyes, Dory’s dream of bottling the “enlightenment” she feels is a viable money-making opportunity, and Dory sees their partnership and the formation of their new company, LYTE, as yet another step towards her true purpose.

This isn’t the first time that Search Party’s framed Dory as its villain or poked fun at Silicon Valley types like Tunnel, but by making the two of them allies, the show introduces a level of preposterousness that borders on science fiction before deciding to go all-in on the genre. It’s the combined reality distorting power of Dory and Tunnel’s respective fandoms that make it possible for them to move forward with a plan to engineer enlightenment pills without ever stopping to consider how one would even begin to synthesize that feeling into a drug. That warping power is also what makes marketing the miracle drug with the help of a cult consisting of color-coded influencers sound like a good idea to Dory and everyone around her, save for Drew, who rightfully points out that the whole endeavor feels like a catastrophe in the making.

Silly as Search Party’s foray into genre sometimes feels this season, all of its jokes about LYTE’s ambassadors play as sobering reminders of the existence and danger posed by real-world cults like NXIVM, which can seem laughable and ridiculous to the people who aren’t trapped inside of them. Search Party acknowledges how the plan to turn enlightenment by way of near-death experiences into pills doesn’t make any sense, but the show uses that obvious fact as a way of reminding you how off the rails it’s gotten and perhaps as a way to work in a handful of understated gags about The OA and Elizabeth Holmes’ rise to infamy.

Much in the same way that Theranos’ engineers were not able to produce the miraculous machines the company’s investors were promised, LYTE’s scientists, led by ​​Dr. Benny Balthazar (Aparna Nancherla), cannot figure out how to create a pill that momentarily kills a person before reviving them and leaving their third eye wide open. Because Tunnel is involved in the endeavor, though, and because Dory’s become the face of a bona fide movement backed by Tunnel’s money, LYTE cannot afford to fail in the public eye, lest everyone involved suffer the economic and social blowback.

Where Dory’s grounded in her enlightenment at this season’s beginning, that all begins to crumble in Search Party’s final episodes as it becomes undeniably clear how she’s surrounded herself with delusional “yes” people who will do basically anything she asks of them, no matter the cost. Dory’s realization that she’s become trapped in another toxic bubble of her own making is one of Search Party’s most chilling narrative beats, in and of itself, but what’s even more disturbing is Dory’s decision to just roll with it.

All throughout Search Party’s final season, Dory receives a number of disturbing visions of the future that, despite her whole being a messiah deal, she purposefully chooses not to share with anyone. The first time Dory sees her five LYTEs all bleeding from their eyes in the middle of a big performance, she isn’t sure what to make of the vision, and Search Party intentionally leaves it open to different interpretations. The meaning becomes much more clear, though, once Dory, her friends, and the LYTEs barricade themselves in LYTE headquarters and make the impossible happen.

In response to Tunnel admitting that he doesn’t actually believe in LYTE’s mission, Dory and the LYTEs manage to make (by hand) a batch of enlightenment pills that meet all of the nonsense specs they came up with. Because Dory says that it’s all going to work out, it doesn’t matter to any of them that by the time they have the pills in hand, Dr. Balthazar’s dead, multiple hostages have been taken, and the police have the LYTE building surrounded.

Because Dory says it’s going to be fine, it doesn’t matter that they don’t even really have the time to test the pills out before they manage to escape into the woods. Because Dory herself reached a higher state of consciousness by dying, her friends and disciples feel no fear as they risk their lives by taking the pills and their unknown contents. And it’s because Elliott made sure to switch some of the pills with jellybeans that only some of them end up being transformed into literal flesh-eating zombies. Search Party abides by classic zombie rules, however, and it isn’t long before there’s an outbreak of bloodthirsty ghouls who contract whatever LYTE’s “enlightenment” is from bites.

Search Party’s zombie turn plays as an alright last-minute joke about Hollywood’s exhausting obsession with the undead, but it’s also the show’s way of reiterating what kind of person Dory is — someone so desperate for human connection that she’d destroy herself and, paradoxically, everyone around her for it.

That truth is crystallized in the two scenes bookending Search Party’s finale episode, “Revelation,” which opens on her passing out enlightenment pills to a crowd of fans before she knows what the pills do and closes on a shot of her days later standing before a wall filled with missing posters of presumably dead people. Search Party leaves open to interpretation just how responsible Dory feels for causing the zombie apocalypse and whether she truly feels remorse. What’s surprisingly undeniable, however, is how satisfying a conclusion this is to the larger journey Search Party’s been on this entire time.

All five seasons of Search Party are now streaming on HBO Max.