Stranger Things 4 cranks everything up way past eleven 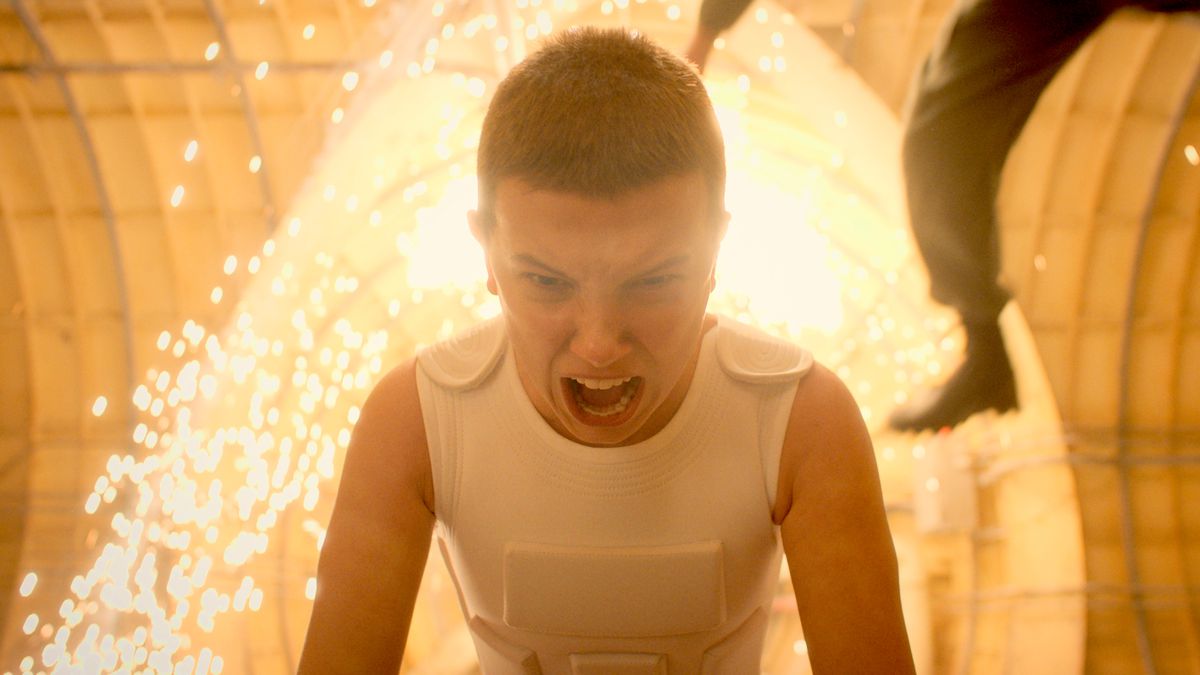 Stranger Things 4 is like the seasons that came before it in how it draws inspiration from the pop cultural canon of the ‘80s, making its individual chapters feel like studied homages to the genre cinema of the era. In this fourth installment though, Stranger Things embraces a newfound sense of itself as something more than a stylized tribute to the creature features and coming-of-age classics that packed theaters decades ago. Stranger Things 4 is bigger, bloodier, and much more intense than the seasons that came before it, but it also feels like a natural evolution of the sprawling epic the Duffer Brothers have been telling from the very beginning.

Time has always been a somewhat tricky thing in Stranger Things’ fictional town of Hawkins, Indiana, where slimy portals to nightmarish parallel dimensions are known to occasionally open up, but it takes on a new significance as Stranger Things 4 catches up with its teen heroes. Set about six months after the events of its season 3 finale, Stranger Things’ newest batch of chapters opens on Mike (Finn Wolfhard), Will (Noah Schnapp), Lucas (Caleb McLaughlin), Max (Sadie Sink), Dustin (Gaten Matarazzo), and Eleven (Millie Bobby Brown) all doing their best to find some sense of normalcy after their last battle with a being from the Upside Down.

“Normal” for Eleven, Will, Will’s older brother Jonathan (Charlie Heaton), and the boys’ mother Joyce Byers (Winona Ryder) means settling into a new life as a seemingly average family in California where they believe “Jane” — Eleven’s birth name — can get a fresh start. With Eleven’s powers on the fritz and her adoptive father Jim Hopper (David Harbour) still missing, learning how to simply exist as a regular teenager is both a challenge and thrill for her. But Eleven’s genuine excitement and the Upside Down going all but dormant following their departure from Hawkins makes the Byers’ journey out West feel like something that’s right for them all.

Stranger Things 4 finds the rest of the gang back in Hawkins also mostly thriving as the town’s kids gear up for their impending spring break. With Lucas dedicating more time to Hawkins High’s basketball team and Max still coping with the death of her brother, Mike and Dustin find new friends in the Hellfire Club — a group of Dungeons & Dragons-playing outcasts led by outgoing senior Eddie Munson (Joseph Quinn).

By splitting the kids up into smaller units and introducing other new characters, like basketball team captain Jason Carver (Mason Dye) and pizza-delivering stoner Argyle (Eduardo Franco) into their arcs, Stranger Things 4 establishes change as one of its defining themes this season. Stranger Things’ core group of childhood friends aren’t breaking up or falling out exactly, but they are growing up and apart as kids tend to do as they get older.

Leaning into that reality is part of the way that Stranger Things 4 tries to skirt around the fact that essentially all of its young actors have already visibly out-aged their characters. The distraction works, especially as Stranger Things’ central mystery pulls its protagonists closer together in the face of the supernatural once again. But when the kids are dealing with more grounded everyday challenges in normal settings, like getting a grasp on the social dynamics of their high schools, it’s occasionally hard to buy them as unpopular high school freshmen.

What’s much easier to believe and more interesting to dig into is the psychological baggage Stranger Things 4 highlights in each of its protagonists. Though Stranger Things has always and very much continues to revolve around Eleven and her connection to the Upside Down, this season plays with the idea of Hawkins being a cursed place that has an uncanny way of changing people who know about its secrets. While most everyone’s busy going through puberty and staying on top of schoolwork, they’re also dealing with the weight of knowing what kinds of horrors the Hawkins National Laboratory has unleashed upon the world.

Though this season introduces yet another Dungeons & Dragons-inspired creature from another world — this time a Nightmare on Elm Street-like ghoul — the monster plays an important role in how Stranger Things 4 begins to flesh out and answer some of the series’ bigger mysteries. For characters like Nancy (Natalia Dyer), Steve (Joe Keery), and Robin (Maya Hawke), Stranger Things 4 is a story about knowing themselves and embracing responsibility at a time when the adults in their lives aren’t equipped to. What’s impressive is how effectively Stranger Things organically pulls their threads together to tell a story that feels like it’s gaining momentum in the buildup to the series’ not-too-distant finale.

As Stranger Things 4 evokes the real-world satanic panic that gripped pearl-clutching ‘80s parents who didn’t understand why people would want to fight make-believe dragons in dungeons, you get the sense that this is the direction the Duffer Brothers always planned to take the show. There’s a thoughtfulness to both Stranger Things 4’s central monster and to the obstacles it throws at Eleven and co. that keeps this season mostly crackling with a vibrant energy. But that energy falters whenever Stranger Things slows down for one of its many quippy exposition dumps that pop up with increasing frequency as the season progresses. These caches of plot detail — always delivered in breathless exchanges of almost rhetorical questions — are also partially why some of this season’s episodes run (unnecessarily) long.

One reason Stranger Things 4 sometimes feels the need to overexplain itself may be because there’s quite a bit going on this season that’s all meant to fit together like a satisfying puzzle once enough of the pieces are laid out. That impulse may be justified given how far this story’s come in the six years since Stranger Things first began airing, but it only serves to underline how straightforward most of the show’s twists are when you step back to consider them.

Unlikely as Stranger Things 4 is to confound you, it has a much better chance of disturbing you with its unusually gruesome and graphic way of sending off this season’s victims. There is a logic behind and significance to the amount of gore Stranger Things 4 puts on display, and the way those things are revealed really works to emphasize what level of threat Eleven and her friends are facing.

What’s curious about the episodes of Stranger Things 4 that were provided to press is how the show already feels like it’s in the series’ imminent endgame territory. It’s not that season 4 answers every burning question that you might have had. But it does manage to stand on its own in a way, instead of simply feeling like set-up for the finale. It’s bold, bloody, and a little too big — but it’s also a good reminder of what made Hawkins such a hit in the first place.

The first seven episodes of Stranger Things 4 premiere on May 27th, 2022, with the final two dropping on July 1st.

How Mobile Apps Are Changing The Future Of Education The idea of learning while being at home is what an eLearning app aims to accomplish....
Read more

The Present And Future Of AI In The Education Sector Science and technology are developing at a very fast pace and many new techniques are...
Read more

How Mobile Apps Are Changing The Future Of Education The idea of learning while being at home is what an eLearning app aims to accomplish....
Read more
E-Learning

The Present And Future Of AI In The Education Sector Science and technology are developing at a very fast pace and many new techniques are...
Read more
Feature news

Now DoorDash could start delivering your Facebook Marketplace purchases, too

You may soon have the option to have your Facebook Marketplace purchases picked up and delivered by DoorDash. According to a report from The...
Read more