Stranger Things 4’s new monster is made with practical effects, some CG, and lots of lube 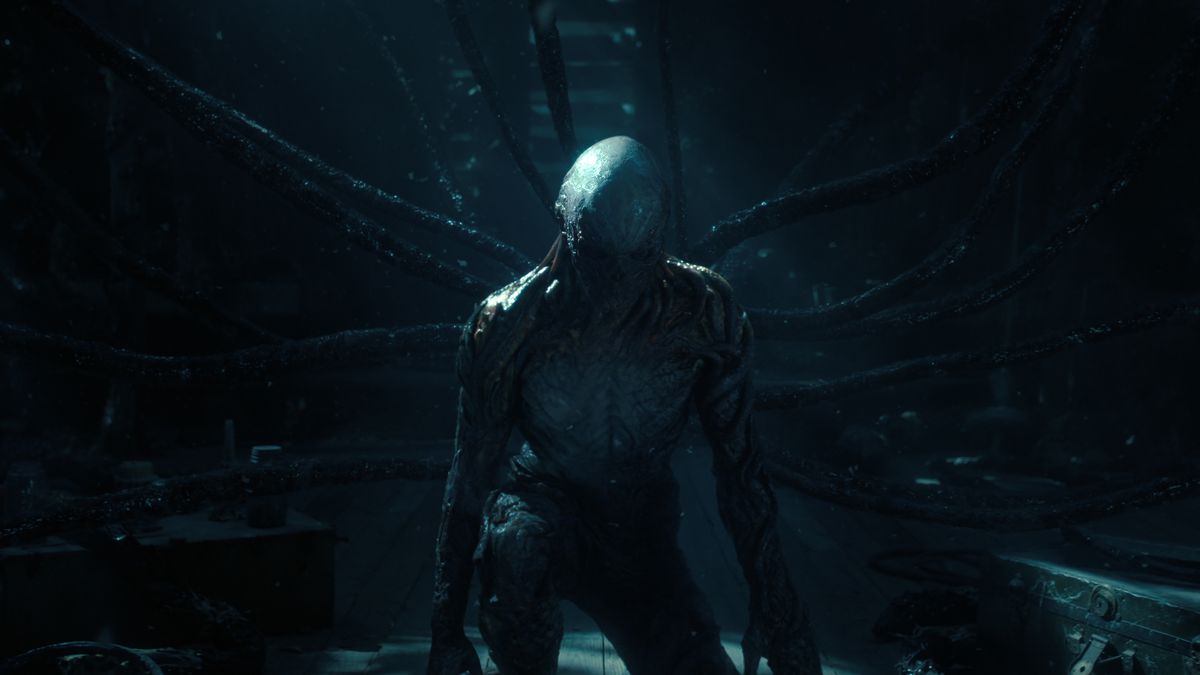 With terrifying beasts like the Demogorgon and the Mind Flayer, Stranger Things has slowly been building up an impressive bestiary of monsters. But, for the latest season, the show goes in a slightly different direction. Its new baddie, called Vecna, is less of a mindless beast and more of a classic-style ‘80s movie monster in the mold of Freddy or Jason. So showrunners Matt and Ross Duffer tapped prosthetics designer Barrie Gower to help bring their attempt at an iconic villain to life. “The quite interesting thing about Stranger Things is it’s this huge property already, and it’s got this great design sense to it,” Gower tells The Verge. “They already had a very clear vision of what they wanted to do with this character.”

Gower is no stranger to showcase villains, having previously worked on Game of Thrones’ Night King, among other notable projects ranging from Harry Potter to Chernobyl. But he was a stranger to, well, Stranger Things, having only joined the show for the fourth season. According to makeup department head Amy Forsythe, who has worked on the show since the beginning, Gower’s experience added a different dimension to the show. “Practical effects are such a huge thing with the nostalgia of the ‘80s, and we were losing that so much in our show,” she explains. “So finally having somebody with Barrie’s expertise come in, it really levels the show up.”

Vecna is a gloopy black creature that definitely looks like something out of the dark world of the Upside Down. But he’s also the most humanoid monster featured in the show so far. Gower says the process started with concept images from artist Michael Maher Jr., which was followed by plenty of discussion with Maher, the Duffers, and the visual effects team, among others. One of the main goals, Gower says, “was to create the character as close to 100 percent practical as possible.”

Instead of a rubber suit, Vecna’s costume consists of a series of different pieces that were glued directly to the actor’s skin. This provided a few advantages, including giving the actor more freedom to move. Rubber suits also have a tendency to buckle, which doesn’t look great on camera. It did require a lot of work, though: the application process took an average of 6.5 to 7 hours to complete.

And there are also some, let’s say, human problems that have to be factored into the design. One is heat. The costume was designed to be as comfortable as possible, but even still, the actor could be seen hanging out in an air-conditioned tent to cool down in between takes. “Most importantly, the actor has to go to the loo at some point during the day,” says Gower. “So you have a special undercarriage that went under some cycling shorts so he could open a special Vecna pouch and go to the loo.”

Gower notes that many of the techniques used in Vecna’s creation were pioneered in the ‘80s, though the team had the advantage of more modern materials. Some of these helped give the monster his decidedly slimy look. The prosthetics themselves were painted with a glossy silicone finish, but that wasn’t enough. “On the day he has to be super slimy, so we use products like K-Y Jelly. There’s a product called UltraWet, which is kind of like a clear gel that we’d slather all over him,” says Gower. “It’s the kind of thing where on set you’d put your hand on his shoulder and regret you did it because you’re covered in slime.” (Slathering on lube, it should be noted, is a fairly traditional monster-making technique.)

That’s not to say it was all practical. From the beginning, the plan was to augment Vecna’s design with some digital effects. His ropey tendons, for instance, subtly move and twist in an unsettling fashion, which was done by the VFX team. Similarly, the actor’s nose was removed digitally. But for the most part, what you see in the show is what the prosthetics and makeup teams built.

“We’ve worked on shows before where we would create characters, and as far as you’re aware that’s how they would play in the final edit,” says Gower. “And then you see the show and think ‘Where’s the character we did? This has been completely painted over.’ That wasn’t the case at all [on Stranger Things]. It was this lovely collaboration with VFX.”

From what I’ve seen of season 4 so far, Vecna also fits seamlessly into the world because of the apparent thought and planning that went into other elements of the show around him. Most notably, his victims all have a distinct appearance with hideously broken limbs and gouged-out eyes. Forsythe explains that this kind of cohesive visual style is a result of how the various departments work so closely together. “The collaborative aspect is so much fun,” she says.

Like most other shows and films from the last few years, production was challenged by the pandemic. In total, the team filmed for 14 months but with a six-month gap partway through due to COVID protocols. “It was just a wild little 20 month shoot,” says Forsythe. “From start to finish I could’ve had two children.” She notes that the biggest challenge was continuity. “We went through maybe four different makeup teams,” she says. “It’s the nature of the beast. Every time we caught our stride, we would lose somebody pivotal to our team.”

The benefits of a focus on practical effects, and merging them cohesively with digital ones, are evident when you watch the new season. More than any season before it, Stranger Things 4 has the feeling of a classic ‘80s horror movie, complete with a monster that gets scarier the more it’s revealed. Gower also believes that practical focus has a positive impact on the performances of the various cast members. “I think from their point of view it’s enjoyable having something physical and practical on set that they can interact with,” he explains. “It’s not a guy in a mo-cap suit or a green suit or something. There he is in the flesh.”

There are drawbacks, however. Forsythe remembers taking a photo of an in-costume Vecna sitting in her 1965 Ford Ranchero, with members of the makeup and prosthetics team in the back. “He slimed the driver’s seat of my car,” she says.