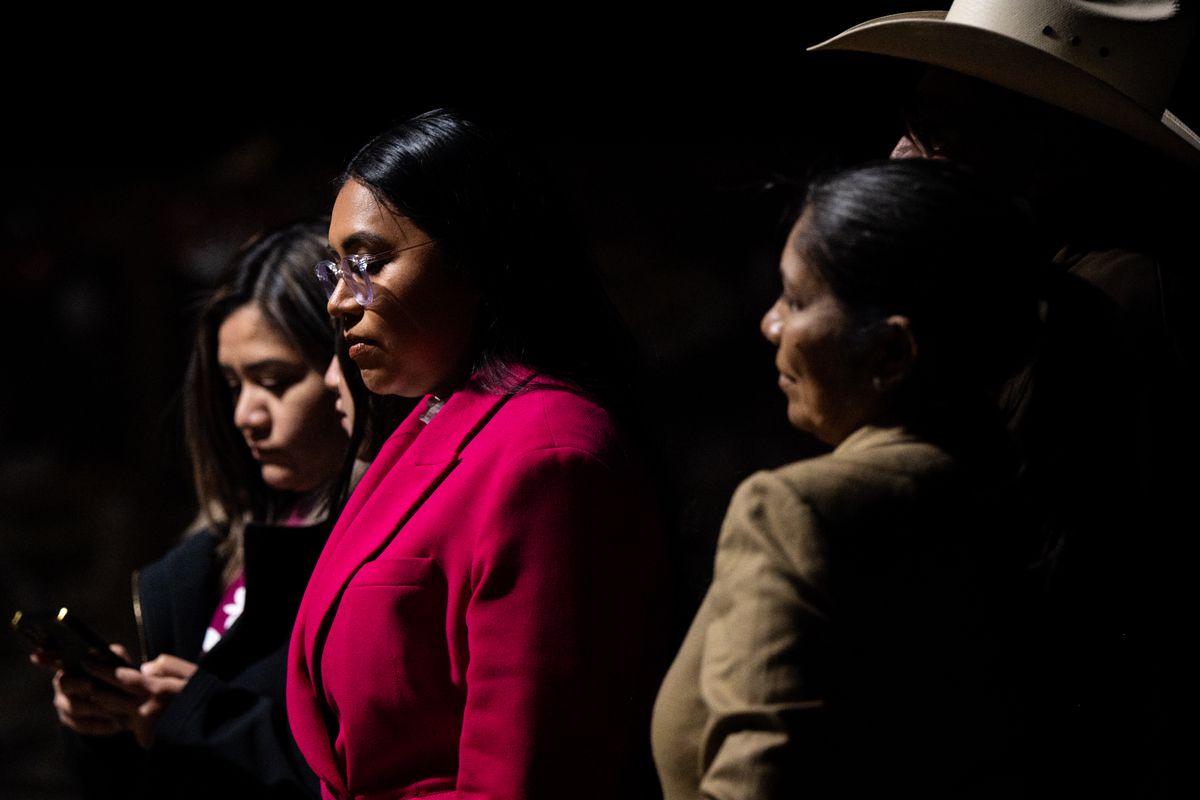 In the first state primary of 2022 on Tuesday, Trump-backed Republicans surged and progressives had strong performances in key, traditionally moderate Democratic districts.

Incumbent Gov. Greg Abbott, who moved even more sharply to the right in the last year, handily fended off a bevy of challengers from his right to win. Similarly, Lieutenant Gov. Dan Patrick, who has a close relationship with Trump that he has used to build influence, also sailed to his party’s nomination.

The success of opposing wings of both parties reflect just how polarized newly drawn Texas electoral maps are — and that’s by Republican design. Some blue districts have become bluer, but mostly in the service of simultaneously making safe Republican districts even safer.

That polarization becomes even more evident in the state’s midterm elections, which tend to see only each party’s most partisan voters cast ballots. Turnout and exit poll data aren’t yet available in full. But what’s clear so far is that the state’s most conservative and most progressive candidates had good nights.

Texas was the first major test of Trump’s enduring clout in the Republican Party this election cycle. Trump endorsed 33 Texas Republican candidates, more than in any other state. As of early Wednesday morning, most of them were projected to win their primaries or were well ahead of their opponents in the vote tally.

One exception is Texas Attorney General Ken Paxton, who didn’t win his primary outright. Paxton was arguably the most vulnerable Republican candidate in the state going into Tuesday’s elections — he has been indicted for securities fraud and is the subject of an ongoing FBI investigation for malfeasance in office. He will face George P. Bush, Texas public lands commissioner and son of former Florida Gov. Jeb Bush, in a May 24 runoff since neither received more than 50 percent of the vote. Dawn Buckingham, Trump’s pick to replace Bush as commissioner, is also headed to a runoff.

Overall, however, the results suggest that Trump continues to hold sway with primary voters and will wield a lot of power over Republican contests going forward in 2022 as candidates compete for his endorsement.

“On balance, most of these candidates would rather have the endorsement than not,” said Jim Henson, director of the Texas Politics Project at the University of Texas at Austin.

But there’s reason to be skeptical that Trump’s endorsements played a decisive role in Texas or that they’ll do so elsewhere.

For one, the success of Trump candidates in Texas, a state that has been under trifecta GOP control for decades, might not translate in other parts of the country that are more competitive. Republicans in swing states and districts are likely to be warier about seeking a Trump endorsement, fearing it may hinder their chances among moderates.

Also, all the candidates the former president backed in Texas were already assured, or at least likely, to win. Six of the 17 House candidates he backed were running uncontested and all but two — Monica de la Cruz Hernandez and Wesley Hunt, who are vying for open seats — were incumbents.

“Trump didn’t take any risks,” said Brendan Steinhauser, a GOP operative based in Texas who ran John Cornyn’s 2014 Senate campaign. “Trump endorsed a bunch of people who didn’t have challengers or were going to win anyway.”

Trump also chose not to wade into several contests that might be seen as referendums on his presidency. That includes races involving incumbent Republicans who accepted President Joe Biden’s victory in the 2020 election and voted to certify it, such as Reps. Chip Roy, Dan Crenshaw, Tony Gonzales, and Van Taylor.

Crenshaw is projected to win his party’s nomination despite predictions that he would face a tough primary, in part due to his stands against the far right of his party. Roy and Gonzalez are expected to win as well. But Taylor, who also supported a bipartisan January 6 panel in Congress, is likely heading to a runoff in a district that was been redrawn in 2022 to encompass a larger share of Trump voters.

“Everybody’s talking about the Trump factor, and it doesn’t seem like it was decisive,” Henson said. “I think the jury is still out.”

Tuesday’s race between Cuellar and Cisneros will go to a runoff election. Cuellar has held his seat in the 28th District since 2005, and Cisneros came within 4 percentage points of defeating him in 2020. That could bode well for Cisneros, who shares positions with the third-place finisher Tannya Judith Benavides.

Despite the race going to a runoff, progressive groups have framed the result as a win for the movement and “rebuke of one of the worst Democrats in the House,” said Aaron Chappell, political director for Our Revolution, a progressive PAC that endorsed Casar among other candidates in the state.

Republicans are hoping Cisernos wins the nomination, a situation they think would give them a potential opening. Cuellar’s long history of winning elections in the district makes it clear there’s a conservative streak even among the district’s Democrats, and though rated blue leaning, TX-28 veered right in 2020. The Democratic Party targeted the district as one it thinks it can flip, and seven Republicans battled Tuesday for a chance to challenge the Democratic nominee. The top GOP contenders, Cassy Garcia and Sandra Whitten, also face a runoff.

“I’ve been saying, ‘Don’t forget about [District] 28. That’s gettable [for the GOP] if they nominate Cisneros. There might be a pickup opportunity,’” Steinhauser said.

Despite the fact that progressives will have to wait another two months to determine the nominee in the 28th District, they delivered key wins in other parts of the state.

Casar, for instance, won with 61 percent of the vote in the 35th District.

“We thought he could do it. We always try to be cautiously optimistic,” Chappell said. But the margin by which Casar won was a “better result than we imagined,” they added. The second-place finisher Eddie Rodriguez got only about 16 percent of the vote.

Though the district is solidly blue, Casar’s support for progressive policies — including funding cuts to Austin’s police department and opposition to camping bans on the city’s homeless — drew warnings of coming GOP backlash should he win his primary. Like Cisneros, his campaign was supported by national progressives including Sen. Bernie Sanders and Rep. Alexandria Ocasio-Cortez as well as groups like Our Revolution.

He made Medicare for All, protections for reproductive rights, job creation, and fixing the Texas power grid, which failed during last year’s deadly winter storm, centerpieces of his campaign.

“Progressive policies are popular,” Cesar said in a statement after declaring victory. “And we’re going to pass them for Texas working families.”

Other Texas progressives were also well ahead of their fields as of early Wednesday morning. Lina Hidalgo — the head of Harris County, which encompasses Houston — held a commanding early lead over her Democratic challengers, but the county wasn’t able to report all votes Tuesday night due to damage to physical ballot sheets. State Rep. Jasmine Crockett is likely to face a runoff in the 30th Congressional District but is leading the closest competitor in her nine-person race by roughly 30 percentage points. And Rochelle Garza, a former ACLU attorney, leading her primary by more than 20 percentage points, will face a runoff for the Democratic nomination in the Texas attorney general race.

“This fits in with the pattern we’ve seen, in which the Texas Democratic Party, while still more moderate than the national party, is being blown by the same political winds as the national party,” Henson said. “But as always with Texas liberalism, it’s brash, and it’s loud, but there’s still an open question of just how big it is.”