Home Feature news The Babbit is an innovative speaker that’s not quite ready for prime...
Feature news 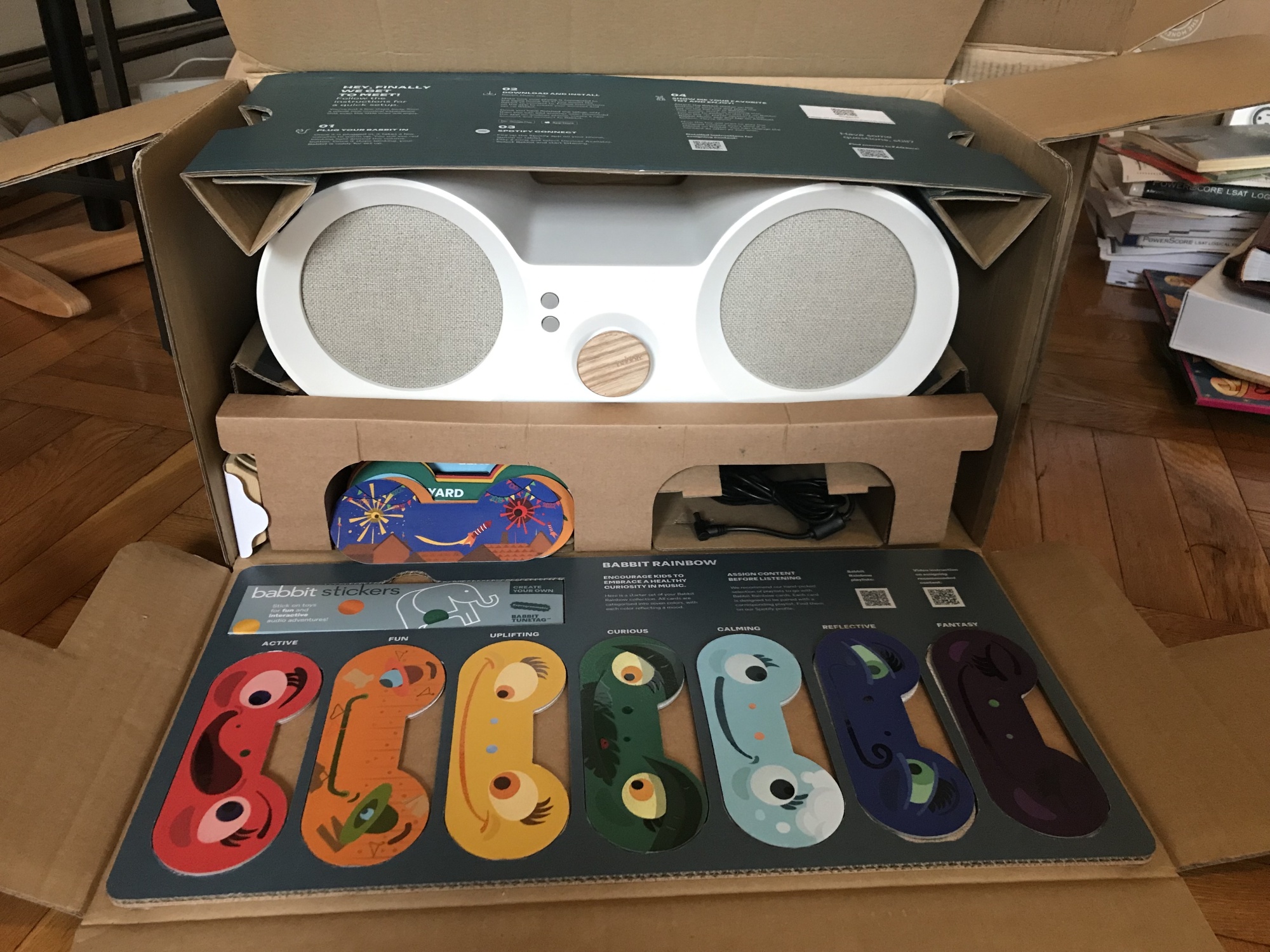 What does it mean for a device to be family-friendly? Depending on the product, that can mean parental controls, limited content, or even extra features so the same device can be used by family members across ages.

The Babbit — a new wireless speaker now available in North America — falls into the final category. It has an extra control feature aimed at young kids, which lets them play music without interacting with a mobile device. Concerns around screen time can be poorly-defined, but it’s fair to say that pre-reading kids will have trouble navigating Spotify. While the Babbit doesn’t fully live up to its promises, it’s a device that is often delightful, with solid sound quality and a hipster minimalist vibe.

What is the Babbit?

The Babbit is a speaker that can play music and audio content via Bluetooth or locally via a USB stick. You can control the speaker either with a connected mobile device or with NFC-enabled cards and stickers. The creators of the Babbit added the latter option so that kids who are too young to effectively navigate a mobile device can still operate the boombox.

When Babbit’s NFC cards work, playing music with them is a magical delight for a kid. But like most things that appear simple, adults in the family should be prepared to put in the time to make Babbit function as designed.

Setting up the babbit

The Babbit is not simple to set up, though it does tend to work as advertised once you do. First, you’ll need to download the company’s app and use it to add the Babbit to your WiFi. Then you’ll pair the speaker with the device that will play the music. It’s not a smart speaker.

Open the app and follow the prompts to connect the speaker to your wireless network. If you have a mesh network like the Eero or another layer of security, you’ll need to use that admin device to allow the Babbit onto the network. Then, enable Bluetooth discovery on the Babbit and pair it with your device. You’ll need to make Babbit discoverable via the app any time you want to connect a new device.

Once the initial tech setup is complete, you have to decide what to play. Here, you have options: Use a device and Bluetooth, or via physical cards. Playing content on the Babbit via Bluetooth is similar to any other wireless speaker.

Using NFC cards and stickers with the Babbit

The big difference between the Babbit and standard Bluetooth speakers is the ability to control playback with NFC-enabled cards. This method has become more popular as a way to let kids play music or audio content independently and without interacting with digital screens.

The Babbit works differently than other devices with similar technology, the TonieBox and YotoPlayer. On those, content is downloaded over the internet and remains local to the device until it’s deleted. The only time content is locally accessed on the Babbit is when you plug in a USB storage device and use it to play content, a method that I could never get to work, despite repeated attempts.

Instead, the Babbit lets you assign an online stream of content, like a Spotify playlist, to an NFC card. These can either be stickers attached to household objects (fun, if slightly twee) or cardboard tokens purchased alongside the speaker.

Cards placed on the active area of the Babbit cue a stream of music to play on the target device with the Babbit as the output speaker. In essence, it’s a fancy way to play Spotify without opening Spotify, which is the service it’s most seamless with.

If using the NFC cards, you’ll need to download and log into Spotify in order to use Babbit’s curated playlists. It’s a good idea to do all of this on a device that will remain in the house most of the time — say a family tablet rather than the phone of a parent who commutes to the office.

The first time you place a card or sticker on the Babbit’s active area (the company calls these “tune tags”), you’ll need to assign content to it. Open the Babbit app, wait for the speaker to recognize the tune tag, and then touch the “play” button. Choose your content — either from a USB stick, an online URL, or a Spotify playlist — and start the stream. Then hit the “assign” button to save that content to the tune tag you’re using. Now, anytime you place the token on the Babbit’s active area, the content will play. If a sticker isn’t working, the company will replace it for free, a rep said.

The two buttons on the speaker move forward and backwards through the track lists, and the knob controls the volume. Pressing the knob plays or pauses the music.

The Babbit can be bought as a standalone speaker or with packs of NFC-enabled cards to link to playlists.
Credit: Alex Hazlett / Mashable

Get a curated music library with Babbit Rainbow

My review unit came with a demo of Babbit Rainbow, the company’s library of curated music playlists for kids. The playlists are selected by “four Latvian music professionals,” the company told Mashable: a producer, a composer, a radio DJ, and a music journalist.

Give the team a medal. Every playlist was eclectic and kid-appropriate without feeling like “kid music.” It was whole-family music that everyone in my house enjoyed. The cards came in a rainbow range of themes — one set of ROYGBIV colors was moods, another was different places, and there are also party playlists for throughout the year.

One side of the cards are illustrated, and the back has a short description of the playlist’s vibe. The playlists are publicly available on Spotify. Like all tune tags, the Babbit Rainbow cards can be reassigned to new playlists repeatedly. If your kids don’t like one, you can change it. You can buy replacement cards from the company if they’re damaged.

You’ll get the most out of the Babbit if you pay for ad-free Spotify. My kids would be in the middle of a jam session and I’d hear ads wafting down the hall. Since Babbit makes what’s actually happening so opaque with its use-card-play-music format, I don’t think they realized what they were actually listening to, which made the ads all the more jarring.

If the USB option worked better, or could be connected to a bigger storage device, it would likely push the Babbit over the line into a truly great device. The NFC playback is useful and delightful, but I wish that I could connect it with the music or audiobooks that I already own or buy.

If I unplugged the Babbit to move it to a different room, I often had to set it up all over again. This took a record 40 minutes on one occasion. These drawbacks are small, but feel meaningful in the context of the Babbit’s price.

What does Babbit cost?

The Babbit speaker is expensive: It costs 690 Euros, or roughly $730 at time of writing. To take advantage of the NFC-enabled playback feature, you’ll need to also spend another $20 or $26 to buy a package of NFC stickers or blank cards. The speaker and full library set of cards is 790 Euros, or $836 at time of writing. That’s cheaper than buying the speaker and full card set separately.

Babbit vs. YotoPlayer and TonieBox

The YotoPlayer and TonieBox are aimed at young kids and focus mainly on audio-books. Babbit’s marketing says it’s meant to foster music discovery, and it’ll be more appropriate for a kid who’s at least in elementary school.

The Babbit is much more likely to be used by a whole family and for much longer than the other two devices. The YotoPlayer can also be used as a Bluetooth speaker, but its sound quality is lacking.

The payment models of these devices are also wildly different. Once you buy the speaker and any cards, you’re done paying money for the Babbit. It works with a library of free content via USB or Spotify. The YotoPlayer and TonieBox require you to purchase each additional story or album you want, at a cost that’s more expensive than alternatives like Apple Books or Apple Music. You’re locked into a content ecosystem and limited by the licensing agreements that those devices negotiate. The Babbit largely sidesteps this issue.

Is the Babbit worth it?

The Babbit’s sound quality is excellent, with a full-throated bass and no whiff of tinniness. It holds its own against a Bose SoundLink Revolve+. Given its cost, it absolutely should. But it’s worth acknowledging that other devices aimed at kids or with features for them often fall short in this department.

It seems fairest to compare Babbit to another large home speaker and on that metric, it is more accessible and more useful to an entire family than a traditional Bluetooth speaker. However, if your kids are 10 or older, you will likely get much less use out of the NFC-enabled playback, which is Babbit’s main differentiator.

Since starting to test the Babbit, I’ve tried to figure out what problem it solves. It creates an experience that most closely resembles playing CDs on a family stereo as a kid. Seeing what’s available, trying out music, and just chilling out. I can’t think of another device that uses the online streaming ecosystem to make music available in an analog way. Yes it’s a pain to set up and requires some playlist maintenance, but the payoff — giving children meaningful independence over their time and listening in a device that they can grow into over time — is there. It’s a creative engagement with real life that I wish more technology companies would attempt, even though it falls a bit short.