‘The Batman’ Review: A crime-thriller suffocated by PG-13 demands 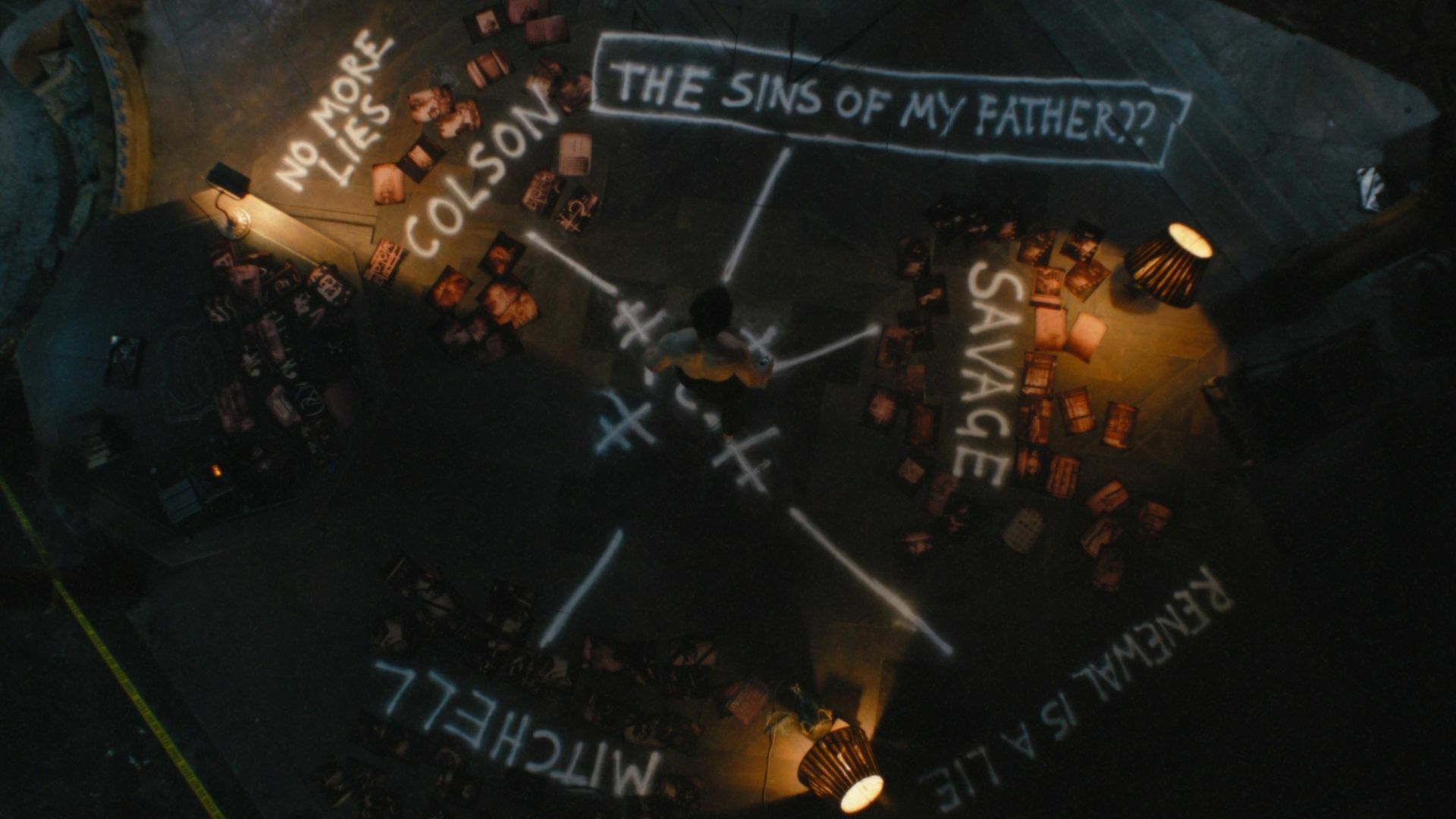 It’s time Batman got a proper R-rated movie. We’ve seen him dance. We’ve seen him “get nuts,” get seduced, and get rubber nipples. We’ve seen him rebrand as a “so serious” Dark Knight, then reboot as a brawny brooder. With The Batman, writer/director Matt Reeves teams with Robert Pattinson to take another spin on the iconic superhero. But without the freedom an R-rating allows, this movie — full of menace and murder — feels toothless.

Imagine if David Fincher made a Batman movie but it was censored to air on televisions at Walmart. That’s what Reeves’ The Batman feels like.

Like Fincher’s Zodiac and Seven, The Batman thrusts audiences into a deeply twisted detective story, where a sharp-minded but impulsive sleuth sets out to capture a serial killer. The clues of the case will be revealed to the detective and his audience simultaneously. So, we shouldn’t be able to get a step ahead. We should be awed by the deductions our intrigued anti-hero unfurls before our eyes.

Regrettably, Reeves first misstep is that his anti-hero doesn’t have the exhilarating disdain and wild bravado of Fincher’s. His Batman is less booming with bravado, more brooding and boring. His theme song is a moaning emo track that never rises to a roar or a victorious chorus, and Pattinson’s performance is similarly one-note. Worse still, this Batman isn’t much of a detective, making leaps in logic that are more inexplicable than elementary.

Imagine if David Fincher made a Batman movie but it was censored to air on televisions at WalMart.

To the credit of Reeves and co-scribe Peter Craig, The Batman doesn’t bother with an origin story, so a news broadcast swiftly establishes that 20 years ago Bruce Wayne’s parents were murdered. However, they skip too much by rushing through a first act with no character development. It’s expected you know the drill: Orphan haunted by his past stalks the night as a vigilante dressed as a bat, hellbent on justice. Also, Alfred (this time played by Andy Serkis) is his butler/father figure/metaphorical punching bag for bad moods.

But this Batman’s not like the other Batmen. He’s a mood, made up of grumbling angsty monologues, hard stares, and grit teeth. Oh, we’ve done that? Well, he’s so aggro that his yarn-walling is done with spray paint on concrete! (This is not a joke. It’s a real scene.)

Catwoman is similarly confined to a mood of murky misanthropy. Zoë Kravitz’s natural charisma is suffocated in a role that asks her chiefly to sneer and hip swivel while wearing leather. The two larger-than-life characters of Batman and Catwoman are bled of their verve. So, their fight scenes — though thoughtfully choreographed to be balanced with a hint of sexual innuendo — lack spice. Their forbidden romance feels more required than earned or authentically lusty. Their chemistry is inert, making me wish I could flee the theater and revisit the wild sensuality of Michael Keaton and Michelle Pfeiffer’s Bat/Cat liplock in 1992’s Batman Returns.

It’s almost like Reeves forgot superhero movies should be fun. Sure, there are action sequences, big-budget and full of spectacle. There are villains, vicious and eccentric. Sometimes, there’s even a bit of grim humor amid the avalanche of exposition and Batman scowling. (A bit about a thumb drive is unexpectedly and darkly funny.) But Reeves appears more interested in creating grisly pageantry than entertainment.

The Batman‘s central plot focuses on the titular vigilante’s quest to capture a serial killer called The Riddler (Paul Dano). Forget the spandex razzle-dazzle and rubber-faced clowning of Jim Carrey. His wardrobe is army green, his face hidden by a winter combat mask that turns his whining diatribes into something sweatier and rank.

His M.O. — from home invasions to brutal murders, bombings, dropping messages directly to the media, and leaving taunting ciphers for the police — appears to be cherry-picked from notorious true-crime cases, including the Unabomber, the Zodiac, and the so-called “Evil Genius.” Yet, within all this murder, menace, and mayhem, The Batman pulls its punches. 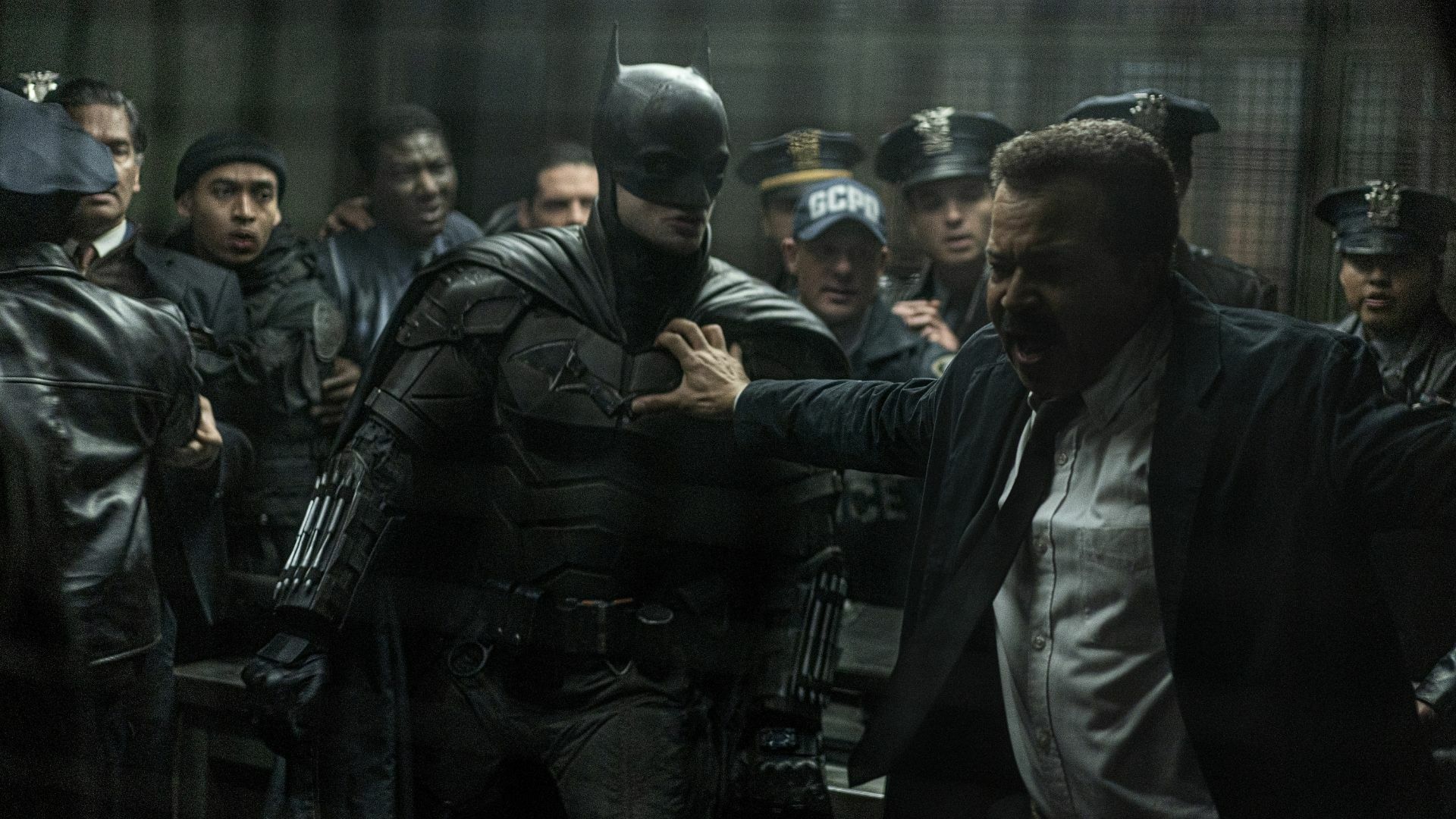 There is violence. But the hardest blows are either offscreen or obscured by shadow, rain, or a purposefully blurred focus. This is a PG-13 movie after all. It has to be because Batman is a property that’s so popular that even Christopher Nolan couldn’t get an R-rating for his Dark Knight Trilogy. Of course, it’s possible to have effective violence without showing it or the gore it creates. Reeves doesn’t manage this.

To his credit, he comes up with a cavalcade of ways to imply extreme violence without showing it. These include playing an audiotape of a pivotal murder and cutting wide to cinematographer Greig Fraser’s precisely framed long shots, so visually striking you might be too dazzled to think about why he’s cutting away.

Still, when a core element of the movie is exploring what violence is acceptable (say, Batman punching out a bunch of knockout game-playing gang members) and which is too far (everything the Riddler does), the point is muddied when you won’t truly exhibit the latter.

But perhaps to avoid the well-documented biases of the ratings-bestowing MPAA, she also repeatedly refers to this character as her “friend.” No wonder the proposed politics of The Batman are confoundingly muddled, trying to both-sides every argument over corruption and justice.

The most hilarious instance of PG-13 pandering involves the Penguin, who is a drug-peddling mafioso here. Though relegated to a tertiary role, Colin Farrell relishes every moment in the heavy prosthetic makeup that turns him into a scarred and shit-talking wise guy. When he appeared, I actually had hope this movie might come alive, because Farrell clearly understands the thrill of being a Batman villain. His enthusiasm is contagious.

And yet you may wonder why this iconic character is without his signature cigar? “I fought valiantly for a cigar,” Farrell told Variety. But the studio shot him down. “I said, ‘I can have it unlit! Just let me have it unlit.’ They were like, ‘No.’ [As if] a bunch of 12-year-olds are going to start smoking Cuban cigars because [the Penguin is smoking cigars in a movie.]” 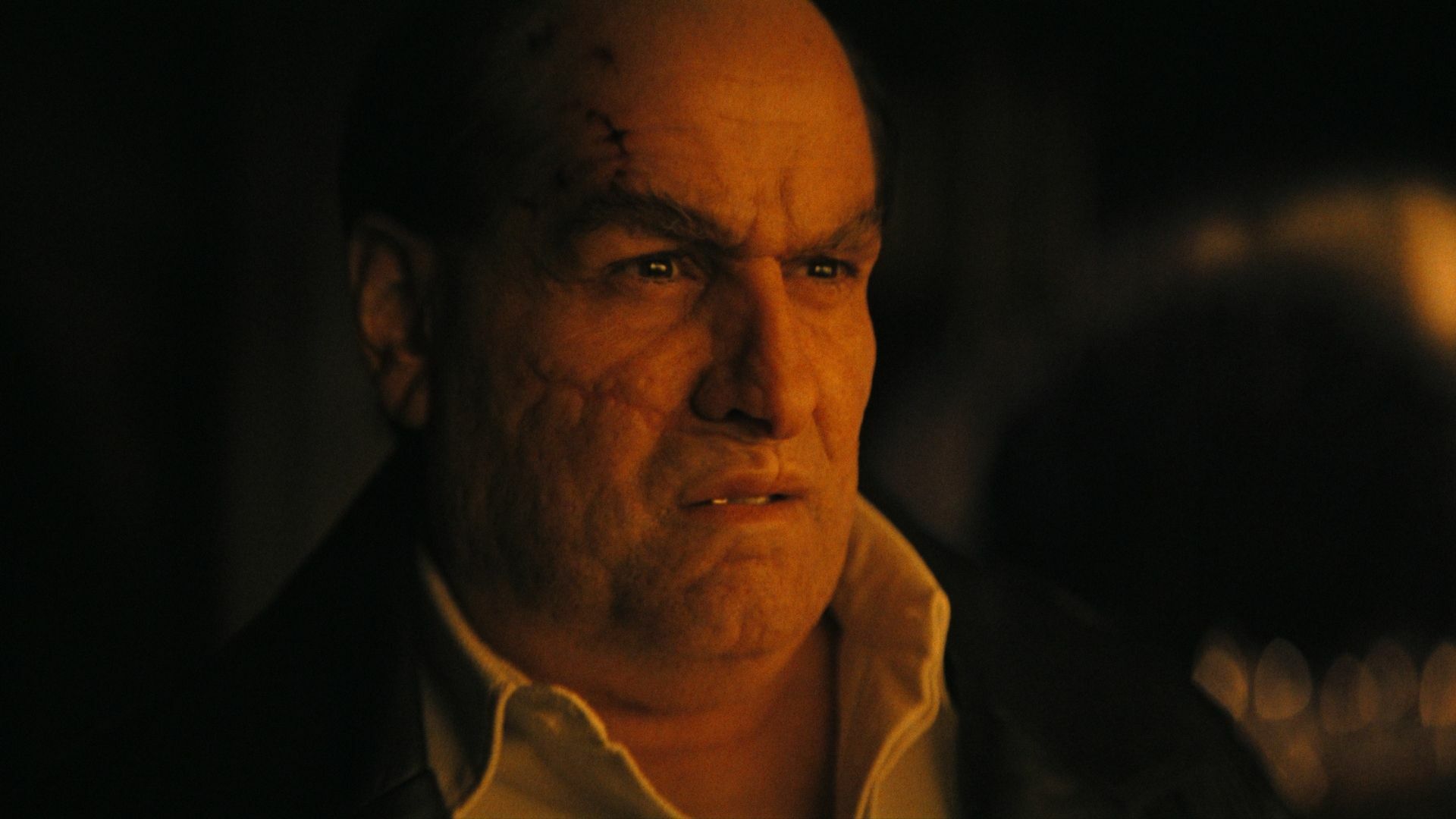 This is a movie about a serial killer, who re-enacts real and really horrendous murders, but having a drug-dealing murderer hold an unlit cigar is a bridge too far. Think of the children.

Frankly, it’s stupid that Reeves was put into this bend-over-backward scenario, where the main plotline involves murder, drug-dealing, and conspiracy. Yet, he needs to play nice enough to not offend the sensibilities of the MPAA, perhaps because Warner Bros. wants a four-quadrant hit that sells toys to children.

This is a movie about a serial killer, who re-enacts real and really horrendous murders, but having a drug-dealing murderer hold an unlit cigar is a bridge too far. Think of the children.

Would The Batman have been a great movie if it were rated R? No. Somehow at 2 hours and 55 minutes, Reeves couldn’t find time to wedge in captivating character development for his hero. So, we’re expected to coast on pre-existing fandom to lock into this Batman and this Catwoman.

Perhaps Reeves got distracted by all the workarounds demanded of diluting a script that clearly wanted to be for grown-ups. Maybe that’s why this movie has even more plotholes than it does Batman baddies. Look over here and don’t pay attention to the glaring leap in logic! This could be why the dialogue is often cringingly cliched, with characters crying things like “You’re not my father!” and spelling out themes like “Fear is a tool” and pivotal epiphanies like: “I have had an effect here — but not the one I intended.” 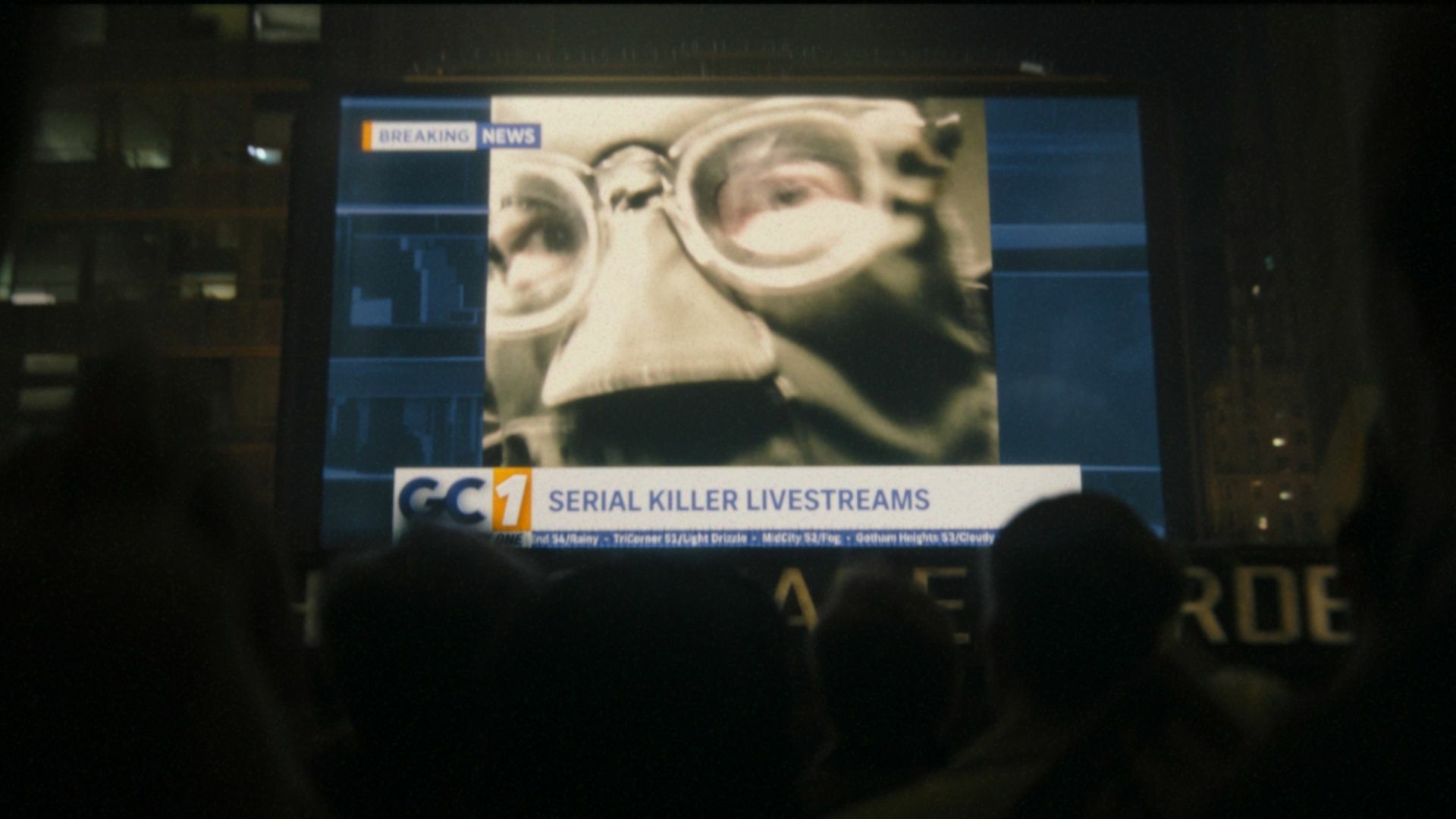 Still, The Batman does have its bright spots – chiefly the supporting cast, who seem unmarred by Reeves’ oppressive gloom. Farrell finds fun in bringing the cartoonish Penguin into a more grounded space, spitting insults and crooked grins. When he finds the opportunity to waddle, it’s witty and splendid. Dano channels Prisoners-level intensity as The Riddler, though his theatrics sometimes swerve from unnerving to annoying.

Storied character actor John Turturro sparks with menace as kingpin Carmine Falcone. From the moment his dark eyes hit the screen and the slow grumble of his voice unleashes a velvet hammer of threat, I shivered and craved more. Yet the standout for me was Peter Sarsgaard in a small role as a District Attorney.

These great actors do what truly great actors do. They take a character who might be thin on the page and craft them into something captivating all the same. In just three sequences, Sarsgaard creates a journey with his supporting character, folding in hope, regret, dejection, rage, and resignation. It’s a performance so good it actually makes me want to watch this movie again…or at least his scenes.

It’s never a pleasure to share that a superhero movie falls short of thrilling. For all the acrimony towards critics — especially when it comes to DC movies — we rarely go to a theater hoping to be bored or underwhelmed.

So, today it is my grim task to tell you The Batman is studded with stars, action, comic book characters, real-world parallels, gorgeous cinematography, and grit-teeth seriousness. But it falls short of exciting or entertaining or fun. It wasn’t a ride, but a chore. Considering all the stories that might be told with these characters, the truly daring possibilities it scratches at dwarf the film it actually is.

The Batman opens in theaters on March 4.