Home Technology The blood-hungry parasite that threatens big fish and business in the Great...
Technology 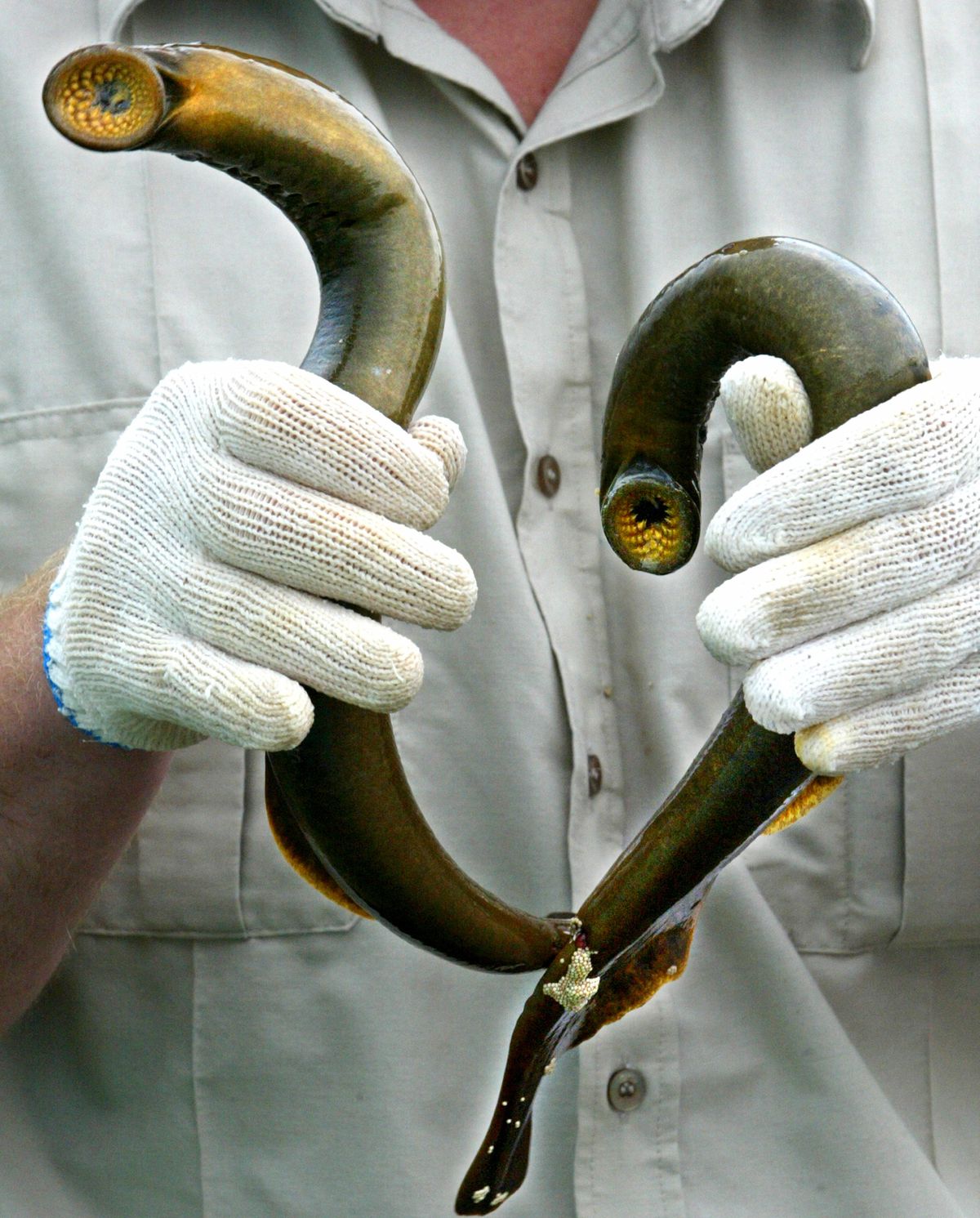 They have the body of an eel, the mouth of a sarlacc, and the diet of a vampire.

Sea lampreys are fish native to the Atlantic Ocean and the rivers that flow into it. But more than a century ago, they found their way into the Great Lakes, where they multiplied and became one of the most destructive invasive species in US history.

These creatures are parasites. To feed, they latch onto fish, bore into them, and start sucking down blood and body fluids, often killing their prey in the process. A single lamprey can kill up to 40 pounds of fish; and hordes of them threaten the Great Lakes fishing economy, which is valued at roughly $7 billion a year.

This raises a fundamental tension, common in invasive biology: How we treat a species depends largely on where it is, even if humans put it there. Looks matter, too. And lampreys in the Great Lakes are, unfortunately, unlucky in both respects.

Reaching up to a meter long, sea lampreys are the largest of 40 or so species of lamprey, a group of truly ancient animals. They’ve been on Earth for more than 350 million years, surviving no fewer than four major extinction events.

They’re an odd bunch, too. Like sharks, sea lampreys have no bones; like salmon, they swim upstream to spawn and can live in both salty and fresh water; and like frogs, they go through metamorphosis.

Then there are those mouths. They’re filled with concentric circles of teeth made of keratin (the stuff in your hair and nails), which they use to suction onto their prey. After they latch on, they bore into the flesh with a beak-like tongue.

Gruesome as that may sound, lampreys are a boon to ecosystems along the East Coast and in western Europe, where they’re native, according to Margaret Docker, a biologist at the University of Manitoba who’s been studying lampreys for more than 35 years. As larvae, lampreys are food for a wide variety of aquatic animals. The larvae live in stream beds, consuming dead or decaying matter that other animals can’t eat, helping cycle nutrients up the food chain.

After a few years (and sometimes much longer), larval lampreys metamorphose and become parasites, growing new mouths, gills, and functional eyes, and exit the stream in masses, Docker said. “A lot of marine mammals and other fish will wait at the river’s mouth for this flood of lampreys,” she said.

Even as parasites, sea lampreys aren’t a problem in their native range. They live in “peaceful coexistence” with other fish, Docker said. Sea lampreys tend to seek out larger fish, which can better survive an attack. They also have plenty of natural predators, including catfish, and other threats like dams, so there simply aren’t that many of them.

Most species become “invasive” because of humans, whether it’s a predatory snail spreading north due to climate change or parachuting Joro spiders that likely traveled to the US on a container ship. Sea lampreys are no exception. They arrived in the Great Lakes sometime in the 1800s, most likely through the construction of canals. (Some scientists believe that sea lampreys are native to Lake Ontario. There’s also a much broader debate about the term “invasive.”)

With plenty of fish to prey on and few natural predators, lampreys thrived in the Great Lakes. And by the 1940s, they were in all five, according to the book Great Lakes Sea Lamprey: The 70 Year War on a Biological Invader by lamprey researcher Cory Brant.

At the same time, the region’s fisheries collapsed. The US and Canada had been harvesting roughly 15 million pounds of lake trout in the upper Great Lakes each year. But by the 1960s, that dropped to 300,000 pounds — just 2 percent of what it once was. “The sea lamprey threatens complete destruction of the Great Lakes fishing industry,” the South Bend Tribune reported in the spring of 1953. (Other threats including overfishing also played a role in the decline of Great Lakes’s fisheries.)

The region’s wildlife officials didn’t hesitate to fight back. In 1954, the US and Canada teamed up and launched an organization called the Great Lakes Fishery Commission (GLFC). Its mission, essentially, was — and still is — to kill sea lampreys.

The nation’s assault on sea lampreys is one of the most well organized and well funded efforts to control any invasive species. Its primary weapons are lampricides — namely, two pesticides that target lampreys but don’t seem to harm most other fish. (Scientists discovered them in the 1950s after painstakingly screening more than 7,000 substances.)

Each year, wildlife officials dump around 175,000 pounds of liquid lampricides into streams that flow into the Great Lakes, where they kill lampreys in their larval forms (they harm native lampreys, too). Officials also rely on small dams or barriers to prevent sea lampreys from migrating upstream to spawn.

In a typical year, GLFC — which spends roughly $25 million annually on sea lamprey control — kills roughly 7 million sea lampreys. So far this year, the death toll has reached 1.7 million, according to a kill ticker on its website.

Lampricides do their job well. Sea lampreys once destroyed more than 100 million pounds of fish each year in the Great Lakes, but today they kill less than 10 million pounds, according to GLFC. That likely comes with plenty of benefits for non-commercial fish and other organisms as well, experts say.

But even these gains are somewhat tenuous, according to Robert McLaughlin, a biologist at the University of Guelph in Ontario. “Anytime that control is eased, they quickly start to rebound,” he said. “The numbers of them right now aren’t that high, but that’s because we’ve been controlling them for close to 70 years.”

Wildlife officials are also far from eradicating the animals altogether. Even though lampricides can kill 98 percent of larvae in a given stream, that leaves some behind to create the next generation, said Marc Gaden, communications director and legislative liaison at GLFC. Just one female lamprey can produce more than 100,000 eggs, he said. “You just can’t get every one of them,” he said, and going that last mile would be extremely expensive.

Scientists are now exploring more creative ways to suppress sea lampreys, including the application of scents and pheromones. Certain pheromones attract lampreys, which allows scientists to lure them into traps, while the concentrated smell of dead lampreys repels them. (This video shows what happens when you add lamprey repellent to a tank. Warning: it’s a bit gruesome).

Controlling sea lampreys has surely benefited fish and those who depend on them in the Great Lakes. But it’s worth pointing out that these efforts threaten the region’s native lampreys — which are susceptible to lampricides, too — and may be harming lampreys everywhere. “In the case of sea lamprey in their native range, there is no doubt that the public’s imagination has been strongly negatively influenced by the need to control the species in the Great Lakes,” authors of a recent study wrote.

Sea lampreys are considered “critically imperiled” in parts of the eastern US and “critically endangered” in parts of Europe, to say nothing of the other lamprey species, many of which are threatened with extinction. Yet, as Kelly Robinson, an ecology professor at Michigan State University, puts it, “everybody just thinks lampreys are terrible because of the Great Lakes.”

If nothing else, then, perhaps you can remember that sea lampreys (and other invasive species) aren’t inherently bad, gross as they may look. Some countries even revere them as a source of food. And even if you’re traveling to the Great Lakes and planning to take a dip, you don’t need to worry. Sea lampreys prefer fish to warm-blooded humans.