The Colorado River drought is coming for your winter veggies 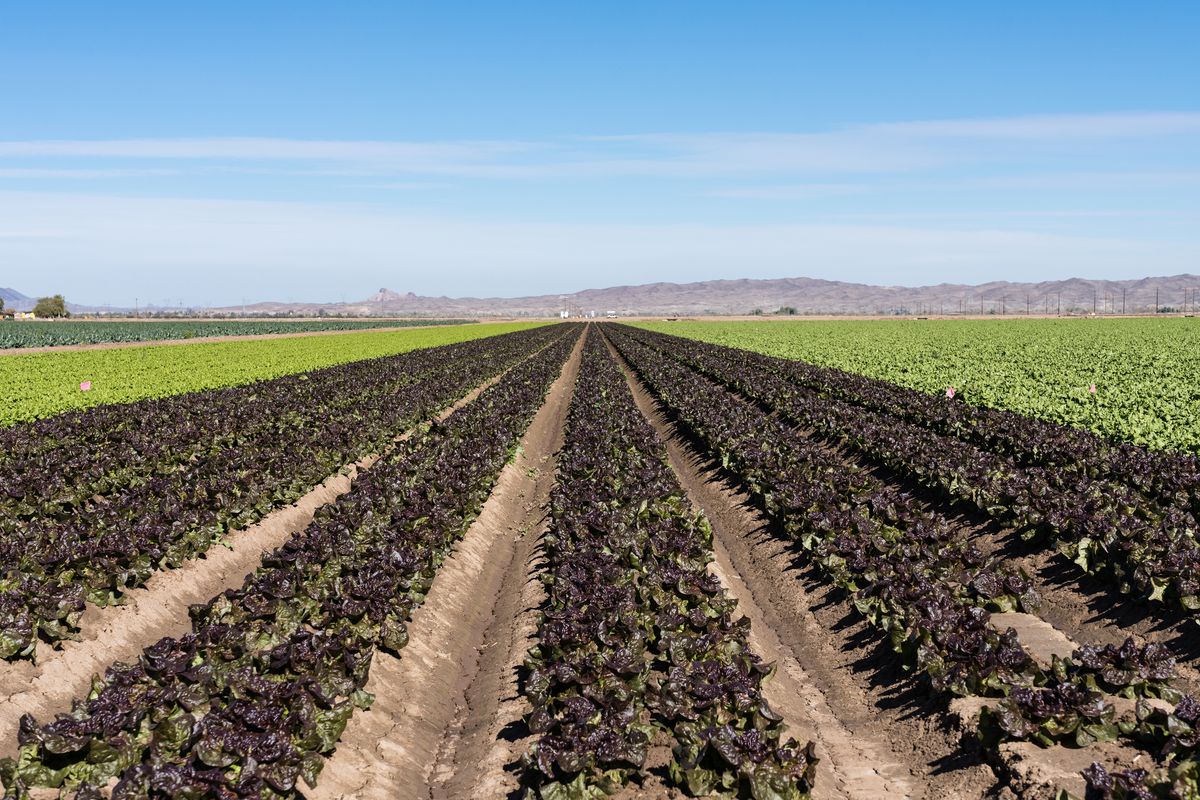 It’s a classic Italian-American meal: a crispy Caesar salad with a plate of marinara pasta.

You can find it in restaurants across the country, but depending on the time of year, many of the ingredients come from just one region. Yuma, Arizona, along with California’s Imperial Valley, produces more than 90 percent of the country’s winter leafy greens and much of its vegetables. Arizona is also a major grower of wheat, which the state exports to Italy for making pasta.

Historically, this made a lot of sense. The region has nutritious soil and a warm climate for growing food year-round, even when the rest of the country is frozen over.

The iconic river is in its 23rd year of drought, according to the Bureau of Reclamation, and the two largest reservoirs, Lake Powell and Lake Mead, have sunk to historic lows, prompting a series of water restrictions. Under climate change, the drought could worsen in the years ahead.

That means residents in the West might have less water for lawns and long showers, but it’s a much bigger problem for agriculture because farmers use about three-quarters of all the water that people take from the river. Some farmers have already had to restrict their water supply, and there are much steeper cuts to come.

Which brings us to this slightly depressing point: When farmers use less water, they tend to produce less food. And that could cause food prices to go up, even more than they already have. Winter veggies, like lettuce and broccoli, could take a big hit, as could Arizona’s delectable wheat. More concerning still is that the shrinking Colorado River is just one of many climate-related disasters that are threatening the supply and affordability of food.

Meandering 1,450 miles from northern Colorado to the Gulf of California, the Colorado River is the lifeblood of the American West. It provides water to nearly 40 million people across seven states, Mexico, and more than two dozen tribes, and it irrigates millions of acres of land.

The river is governed by a complex set of policies — collectively known as the Law of the River — that dictate how much water each state or tribe receives, and which will lose water first when the government imposes restrictions. (Typically, groups that have been using the water for longer have higher-priority water rights, including Indigenous tribes.)

Last August, the federal government declared a water shortage on the river for the first time, in response to projections that Lake Mead, the nation’s largest reservoir, would be at just 34 percent of its capacity by the end of 2020. The declaration, known as a Tier 1 shortage, triggered cuts that affected Central Arizona, which has low-priority rights.

Farmers in Pinal County, Arizona, who grow alfalfa, wheat, and other crops, suffered the most, said Paul Brierley, a former farmer who now leads the Yuma Center of Excellence for Desert Agriculture at the University of Arizona. “They’ve had to fallow [stop planting] about 40 percent of their acreage because they lost all their Colorado River water,” he said.

A withering alfalfa crop could rattle the local dairy industry, Brierley said. Dairy farmers use the flowering plant to feed cows, and when water restrictions take effect, alfalfa is one of the first crops they stop planting.

The Tier 1 shortage, alone, may cause prices of milk, yogurt, and other products to spike, at least in Arizona. But as of this summer, the river is already beyond a Tier 1 shortage, and states are facing additional cuts. The impacts could be much farther reaching.

“Without action, we cannot protect the system and the millions of Americans who rely on this critical resource,” Bureau of Reclamation commissioner Camille Calimlim Touton said on a call with reporters earlier this week.

On the call, Touton declared the first-ever Tier 2 shortage, which triggers additional cuts that impact Arizona, Nevada, and Mexico.

Her announcement followed a Senate hearing in June, in which she advised officials in the seven states that use water from the Colorado River to come up with a plan to cut an additional 2 million to 4 million acre-feet from their supply, on top of the Tier 2 cuts. (An acre-foot is the amount of water needed to fill an acre with one foot of water.)

That does not bode well for farmers and those of us who buy their products. While previous cuts have caused some disruptions in Central Arizona, the impact of a 2-4 million acre-foot reduction — or up to 25 percent of what the basin states currently use — will be more widespread. Withholding that water will likely affect farms in Yuma, the Imperial Valley of Southern California, and other epicenters of food production.

“The [food] system can adapt, but 2-4 million is really a game changer,” said George Frisvold, an agriculture economist at the University of Arizona. “If it gets to the point where people actually have to start cutting back on veggie production, then you’re going to see price increases.”

The first crops to get hit — other than alfalfa and other animal fodder — will likely be produce that farmers plant annually (or more often) like lettuce, broccoli, and tomatoes. These are short-term investments and farmers can decide whether or not to plant them on a yearly basis.

In contrast, many fruits, nuts, and other tree crops are longer-term bets that can take years to pay off and tend to be more valuable. Farmers are not going to let, say, almond trees wilt if they can avoid it.

“When water supplies aren’t available, farmers have to make decisions on what they can and can’t plant,” said Mike Wade, executive director of the nonprofit California Farm Water Coalition.

Consider a farmer that grows processing tomatoes in California for foods like ketchup or marinara, Wade said. If there isn’t enough water for the growing season, the farmer might not even put the plants in the ground. “Then the supply is reduced to the cannery, which has the effect of increasing prices down the line,” Wade said. “That makes the products that consumers buy in the store more expensive.”

Water cuts could also hurt wheat production in Arizona, said Jeffrey Silvertooth, a plant and soil scientist at the University of Arizona. The region is a major supplier of durum wheat to Italian pasta companies, he said.

If a farmer has 20 percent less water, they may choose to leave the ground fallow in the winter instead of planting wheat, Brierley said. “That’s a rational decision that would impact the supply of wheat. And it’s not a good time to produce less wheat,” he added, nodding at the war in Ukraine, one of the world’s largest wheat producers, which has already constricted supply of the grain.

The good news is that, on its own, the drought-related supply squeeze isn’t likely to translate to enormous price increases, Frisvold said. A head of lettuce isn’t going to double in price overnight. A box of dried pasta probably won’t bankrupt you.

Only a portion of the retail price of food is tied to the cost of actually growing it, and thus, to supply; the rest is related to things like marketing and transportation.

Plus, although plenty of food does depend on the Colorado River, there are farms elsewhere, such as in Iowa, that can help meet demand. When the price of certain crops goes up, farmers in other regions start planting them, said Frank Ward, an agriculture economist at New Mexico State University.

So, in a sense, our food system is resilient.

What’s concerning, however, is that drought along the Colorado River isn’t the only disaster that’s straining our food supply. Earlier this summer, an extreme heat wave in the Midwest caused corn to wilt and cattle to die. Meanwhile, another heat wave in India strangled the supply of wheat. That’s on top of supply chain issues linked to the Covid-19 pandemic.

“It’s kind of like death by a thousand cuts,” Frisvold said.

Together, these threats — many of which are worsened by climate change, and accelerating — can destabilize the global supply of food and send prices soaring. They’re part of the reason why you’re paying 13 percent more for groceries this summer, compared to last year.

If water is running out, one solution is to simply use less of it. Farmers can switch to crops that aren’t as thirsty — from pecans to grapes, for example — or use technologies to water their crops more precisely.

More environmentally friendly styles of agriculture can also help farms survive extreme drought. Planting cover crops, for example, helps lock moisture in the soil, and switching to an agroforestry-style farm, where trees are integrated into the landscape, can provide valuable shade.

These changes come at a cost, but the federal government is willing to help pay for at least some of them. The Inflation Reduction Act, which President Joe Biden signed into law earlier this week, includes nearly $20 billion for farmland conservation and $4 billion for drought relief in the West. The federal spending on drought may help compensate farmers for water cuts and help them develop more efficient farms, Brierley said.

But ultimately, the US will have to do much more to ensure a stable and affordable supply of food. Drought is a problem, yes, but it’s linked to the much bigger issue of climate change. Without swiftly curtailing carbon emissions, responding to the shrinking Colorado River is just a temporary fix.