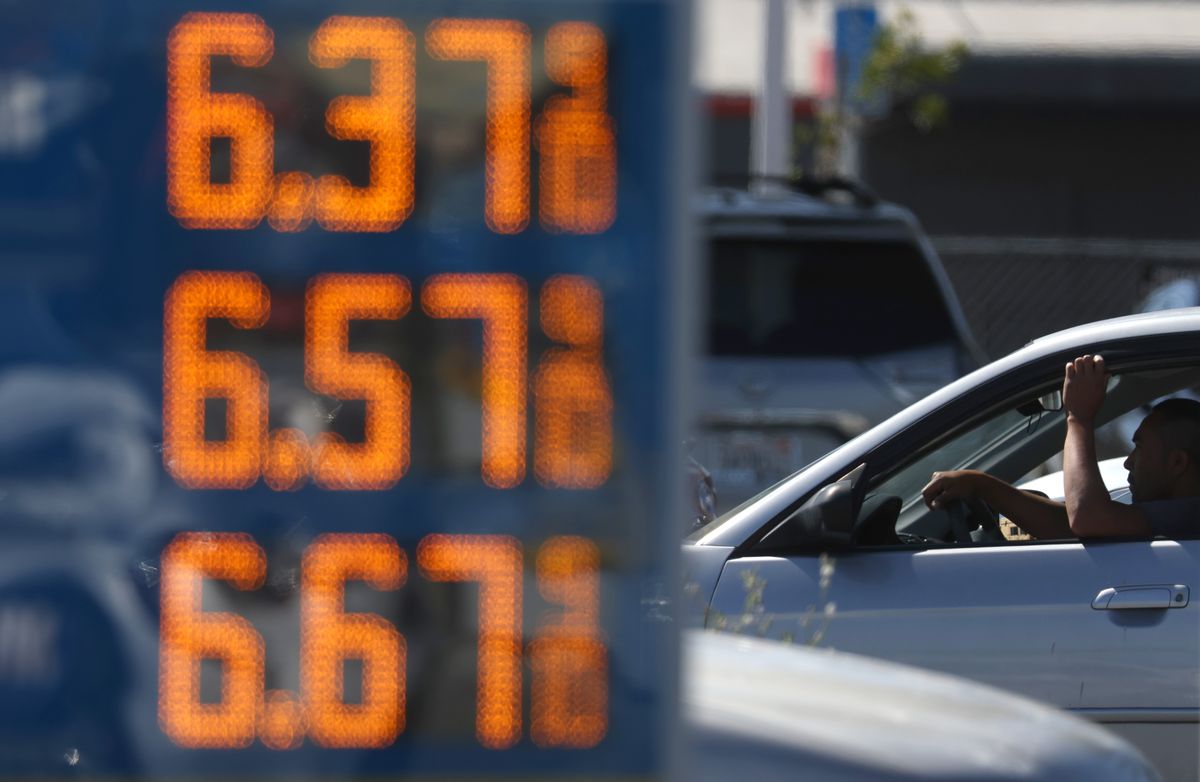 As the average consumer bears the brunt of rising gas prices, big oil and gas companies have continued to rake in historic profits. Lawmakers alarmed at the stark contrast between the industry’s earnings and consumers’ struggles pushed for — and passed through the US House of Representatives on Thursday — a bill that would make predatory price hikes unlawful and expand federal authority to investigate alleged price-gouging. The Consumer Fuel Price Gouging Prevention Act is meant to help alleviate rising gas prices; the national average gas price reached $4.45 per gallon last week — a record high for the US. Some states, like California, have seen gas prices reach $6 per gallon.

That has led to an unprecedented first quarter for oil and gas companies. According to an analysis by the watchdog group Accountable.US, the country’s top 21 companies took in $41 billion in profits during this year’s first quarter — $1.2 billion more on average per company compared to the same period last year, the report noted. Companies like Devon Energy are so flush with cash they’ve rewarded shareholders with “record” payouts. And Congress certainly has taken notice.

“I’m a proud capitalist, and what we’re experiencing with fuel prices is the result of a broken market,” said Rep. Katie Porter, a California Democrat and one of the original co-sponsors of the Consumer Fuel Price Gouging Prevention Act. “Big Oil executives are bragging to shareholders about price-gouging families at the pump. They’re purposely keeping supply low to earn record-high profits, squeezing families — and our entire economy — in the process.”

“The Consumer Fuel Price Gouging Prevention Act would not fix high gasoline prices at the pump, and has the potential to exacerbate the supply shortage our country is facing, leading to even worse outcomes,” Fletcher wrote in a statement. “For these reasons, I voted no on this legislation.”

Even some Democrats who ultimately supported the legislation voiced concerns over the bill. “It just, you know, seems like we’re treating oil and gas like Big Tobacco, and sometimes they’re unjustly targeted,” said Rep. Vicente Gonzalez of Texas.

In addition to vetoes from the four Democrats and widespread Republican opposition, the legislation has received pushback from powerful industry lobbying groups, including the American Petroleum Institute and the National Association of Manufacturers.

With oil and gas corporations resisting regulations and virtually no support from Republicans, the fuel price-gouging bill may face an uphill battle in the Senate, where Democrats hold a slim majority.

The Consumer Fuel Price Gouging Prevention Act is comprised of a few main components: Firstly, the legislation would allow the president to declare an energy emergency effective for up to 30 days, though that declaration could be renewed.

During that energy emergency period, it would become unlawful for any person to sell consumer fuel at a price that is “unconscionably excessive” or that suggests exploitative practices. The bill would also expand the Federal Trade Commission’s authority to investigate and address potential instances of fuel price-gouging conducted by larger companies, defined as companies with $500 million in yearly wholesale or retail sales in the US. Under the bill, state authorities would be granted enforcement powers against fuel price-gouging violations through civil court action.

The legislation is meant to address record-high gas prices in the US, which some lawmakers and watchdogs allege have largely been manufactured by oil and gas corporations. Like other goods on the market, the cost of a gallon of gas is influenced by the market’s supply and demand. Major events like the COVID-19 crisis, Russia’s invasion of Ukraine, and a disrupted supply chain can influence the supply and demand of certain goods on the market.

What remains debatable, however, is how much the price of certain goods becomes affected when variables in the market change. There is no legal definition of what exactly constitutes price-gouging in the US. Oil and gas companies like Chevron and Shell may take advantage of the market’s instability by excessively hiking up gas prices while limiting production to boost profits, which in turn hurts consumers.

It is difficult to know how much of an increase in oil and gas production — which lawmakers like Rep. Porter are demanding — would be enough to alleviate current price-gouging concerns, or even if it would help address the gas crisis at all. Republicans nonetheless believe that targeting the industry isn’t a viable solution, but rather increasing domestic production is the way to alleviate pain at the pump. But GOP lawmakers likely won’t get their wish for a variety of reasons, including resistance from oil and gas companies. A survey conducted by the Federal Reserve Bank of Dallas in March found that many companies did not anticipate increasing production anytime soon. The Federal Bank of Dallas covers the Eleventh Federal Reserve District, including high oil-producing states like Texas and New Mexico.

On average, the Federal Reserve in Dallas survey found that oil and gas companies operating in the district are expecting crude oil prices to hit $93 per barrel by the end of the year, while some even expected prices to go as high as $200 per barrel. At the time of the survey in March, the price of crude oil had hit $100 per barrel. Nearly 60% of corporate respondents in the survey cited “investor pressure to maintain capital discipline” as the main reason oil companies weren’t drilling more despite soaring gas prices. Lawmakers naturally took notice.

Price gouging is anti-capitalist. Big Oil is threatening our entire economy by keeping supply low and jacking up prices at the pump far beyond the inflation rate to satisfy Wall Street.

“Big Oil is threatening our entire economy by keeping supply low and jacking up prices at the pump far beyond the inflation rate to satisfy Wall Street,” Porter wrote in a tweet ahead of the fuel price-gouging bill’s approval by the House, citing the survey’s results. “Oil and gas company executives are *literally* admitting it.”

Analysts believe the best indicator of inflation is the consumer price index (CPI), which essentially measures changes in the prices of goods and services frequently bought by average consumers. The Bureau of Labor Statistics found that the consumer price index had increased 8.3% over the last 12 months ending in April. Among all categories included in measuring CPI, fuel oil prices had increased the most by far, jumping more than 80% over the past 12 months.

But high inflation rates aren’t only affecting gas prices — the housing market, as well as food and grocery prices, have seen soaring prices, too. The ripple effect can have an outsized impact on the average American, particularly low-income families with limited transportation options and who are already running on a tight household budget.

“This inflation thing is a real problem. When you’re paying twice as much to fill your gas tank and twice as much for everything, you’ve got to say to yourself, ‘Well, do I really need to buy everything at King’s [Food Market]?’” one shopper, who now splits her shopping between multiple stores to get the cheapest prices, told the New York Times.

Opponents of the bill argue that price gouging is already illegal in most states, rendering the legislation moot. Instead, they believe that legislators should be focusing on increasing domestic energy production and improving the country’s competitive edge in the global market. The American Petroleum Institute called the bill “misguided” and labeled it as an empty attempt by Democrats to sway voters ahead of the midterm elections in November. Other industry groups feel similarly to many Republicans, who claim their concerns have to do with domestic production and energy security.

“[Combatting price-gouging] starts with opening our diverse resources on federal lands, approving responsible exploration and production, supporting sustainable permitting, and quickly building out more energy infrastructure,” Rachel Jones, vice president of energy and resources policy at the National Association of Manufacturers, wrote in a letter to House leadership in response to the bill.

According to AAA, the main factor driving high gas prices across the country is the tight supply of oil up against market demand.

“The high cost of oil, the key ingredient in gasoline, is driving these high pump prices for consumers,” Andrew Gross, a spokesperson for the company, said in a statement. “Even the annual seasonal demand dip for gasoline during the lull between spring break and Memorial Day, which would normally help lower prices, is having no effect this year.”

Supporters of the bill contend that corporate profiteering by oil and gas companies inherently worsen gas prices. But there is little consensus among experts on the fuel price-gouging bill’s effectiveness. Some believe it may even have a negative effect on the market.

“There is no material prospect that, in any enduring way, gouging legislation can have any substantial effect on inflationary pressure,” Lawrence Summers, the former Treasury Secretary under the Clinton administration, told Bloomberg Television in an interview last week. He added that there was a possibility such legislation may “cause and contrive all kinds of shortages” and undermine companies’ moves to boost supply.

Arguments over whether the fuel price-gouging bill is an effective enough solution to the US’s high gas prices may be for naught if the law is not approved by the Senate, where Democrats have been unable to pass important legislative items in the past, frequently failing to reach the 60-vote threshold needed to end a filibuster and move legislation forward.

But this may not be the last we hear of anti-price gouging legislation as lawmakers try to find ways to fight the economic downturn. Earlier this month, President Joe Biden called on the FTC and state attorneys general to crack down on price-gouging as part of efforts to manage the country’s baby formula shortage, following reports of unfair practices by individual resellers. He could follow suit for oil and gas as well.