The manatees are starving 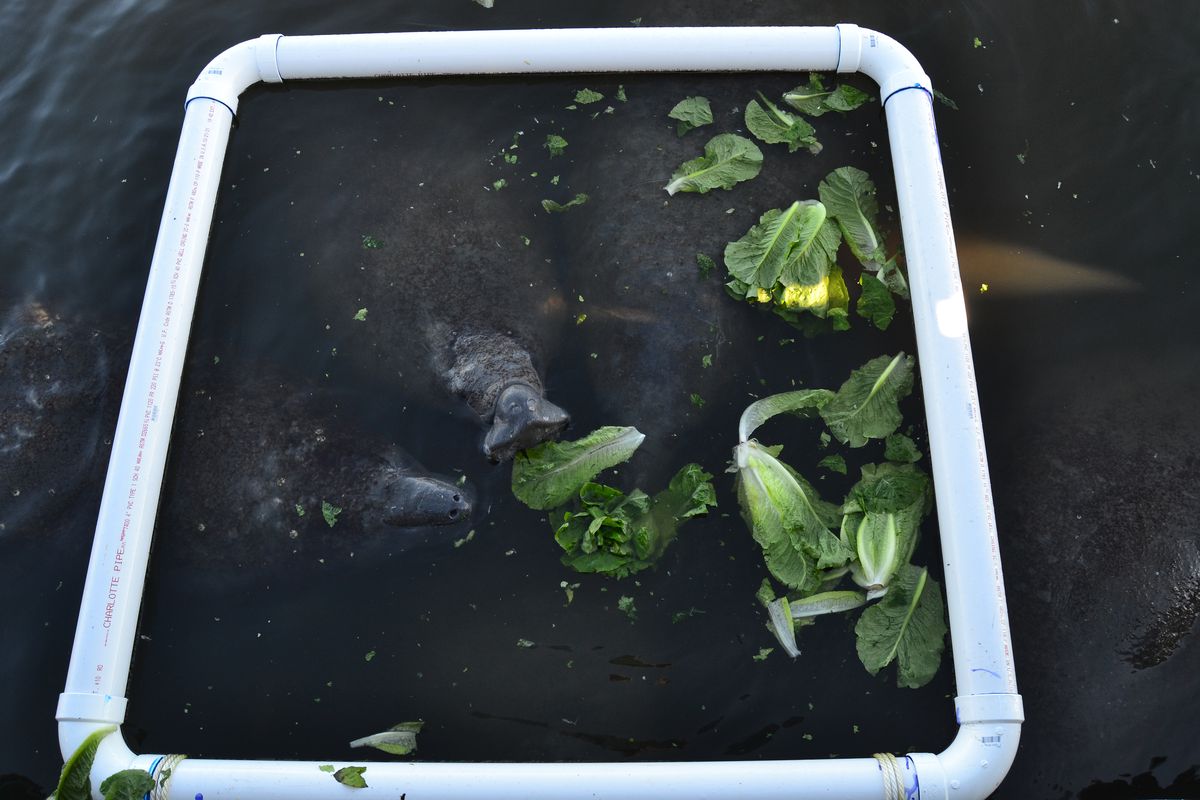 Heads of romaine lettuce might seem like empty calories for starving “sea cows” that weigh 1,000 pounds. But for Florida’s manatees, they’re just what the vet ordered.

In parts of eastern Florida, seagrass — the primary food source for these hulking marine mammals — is disappearing. So for the first time in history, state officials have started feeding manatees huge quantities of leafy greens. A single manatee can crunch its way through about 100 pounds of lettuce in a single day.

Last year, Florida lost a record 1,100 manatees, or more than 12 percent of its total population. And more than 130 manatees have died already in 2022, according to the nonprofit Save the Manatee Club, which is far above average for this time of year. The Florida manatee is a subspecies of the vulnerable West Indian manatee.

“It’s like nothing we’ve ever seen before,” said Michael Walsh, a professor of aquatic animal health at the University of Florida. Manatee rehab centers across the state are now overrun, as more and more of the animals come in with visible signs of starvation — flat undersides, a loss of neck fat, and even exposed ribs, Walsh said.

Florida is running out of physical space to house manatees in need of care, Walsh added, forcing rehabbers to triage. And the stakes are high: Manatees are beloved in Florida and a linchpin of the ecotourism industry — and of the ecosystem itself.

The mass die-off of a cherished species that’s closely watched and meticulously cared for is a symptom of bigger problems that are plaguing many ocean environments: coastal development and pollution. More than a decade of human impacts has weakened the entire ecosystem, making manatees far more vulnerable to threats — starting with a plague of algae.

While manatees are famously rotund, they actually have relatively little body fat. They can only survive in water above about 68 degrees Fahrenheit, which is why you often find them in winter around sources of warm water, such as pipes that release discharge from power plants.

One such manatee hot spot is the Indian River Lagoon, which spans 156 miles between mainland Florida and a barrier island along the eastern shore. The lagoon is home to hundreds of animal species and several kinds of seagrass. They might not look like much, but meadows of seagrass are among the most important features in any coastal ecosystem. They prevent erosion, clean the water, and provide shelter for fish that are a crucial part of the state economy. And for a wide range of animals, including manatees, they’re food.

Algae pose a problem because seagrasses need sunlight to grow. Fed by nutrients in pollution, such as septic discharge and farm runoff, algae can become so abundant that they actually block light from reaching the lagoon’s floor. When the seagrass dies, it can become yet another nutrient that fuels the algae.

Parts of the Indian River Lagoon, where hundreds of manatees congregate to ride out the winter, are now choked with pollution and algae, which means seagrass can’t grow and manatees can’t eat. “Tens of thousands of acres of normal grass are missing,” Walsh said. The animals can’t easily escape to richer, grassier pastures because it’s chilly outside the lagoon. “They are hemmed in by an invisible fence of cold.”

The state now faces a record die-off so severe that it’s been dubbed an “unusual mortality event,” a rare designation that calls for immediate attention under the federal Marine Mammal Protection Act. The starvation-related deaths are on top of a smaller number of deaths attributed to a related algae problem, known as red tide, and boating accidents.

Ecosystems don’t usually fall apart all at once. The damage builds gradually, often without anyone noticing, and may eventually reach some kind of tipping point, said Patrick Rose, executive director of Save the Manatee Club.

There wasn’t some big chemical spill in the Indian River Lagoon, Rose said, but rather slow and steady pollution that accumulated in these waters for at least a decade, throwing the ecosystem out of whack and making it more prone to blooms of algae. In 2011, for example, a “superbloom” of algae erupted in the lagoon, covering roughly 131,000 acres and nearly wiping out its seagrass.

The grass started to recover — until the lagoon was struck by yet another bloom a few years later. By 2017, a staggering 95 percent of seagrass had disappeared in the northern and central portions of the lagoon, and it hasn’t recovered much since.

Healthy ecosystems can bounce back from occasional disturbances like an exceptionally cold winter, said Duane De Freese, executive director of the Indian River Lagoon Council. But when they’re damaged, they become volatile and less resilient, and even seemingly minor changes can cause dramatic effects. “The system today is unstable,” De Freese said. “Our oceans and our estuaries can’t take every pressure and stressor that we throw at them.”

“If you’re a coastal community anywhere in the US, you’re fighting the same battle we are,” De Freese said. Indeed, blooms of algae linked to pollution have damaged ecosystems and economies from the Chesapeake Bay in Maryland to the Gulf of Mexico. “We’re just an example of things starting to go wrong,” De Freese said.

State officials in Florida plan to feed manatees through March, but lettuce is not exactly a long-term solution. Ultimately, experts told Vox, the state has to reduce the amount of pollution flowing into its coastal waters.

The problem is “fixable,” Walsh said. What’s so frustrating, experts say, is that many manatee deaths could have been avoided altogether.

The main source of pollution is a few hundred thousand septic systems from nearby homes and businesses, which leak nutrients like nitrogen into the lagoon, according to a recent study published in the journal Marine Pollution Bulletin. The region urgently needs to modernize its wastewater treatment facilities, De Freese said. He added that Florida also needs a better way to treat stormwater runoff that sloshes into the lagoon along with pollution.

Planting seagrass can help, too. It’s not easy or cheap, but reintroducing native grasses in coastal waters can speed up the ecosystem’s recovery, in part by helping purify the water. Companies like Sea and Shoreline grow seagrasses in a nursery for restoration, not unlike organizations that raise seedlings to restore forests on land.

The lagoon needs about $5 billion for restoration over the next two decades, De Freese said, to make it livable again for manatees and other important species. Last fall, Florida Gov. Ron DeSantis committed $53 million in grants to improve the lagoon’s water quality. “It’s a start,” De Freese said — though he warned that even with enough money, “the recovery isn’t going to happen overnight.”

Residents who want to help can also play a role, he added, such as by limiting the use of lawn fertilizers or avoiding them entirely. One thing they shouldn’t do, state officials have said, is feed the manatees themselves. They may be learning to like lettuce, but leave the sea cow salad bar to the professionals.