The most stunning space photos of 2021 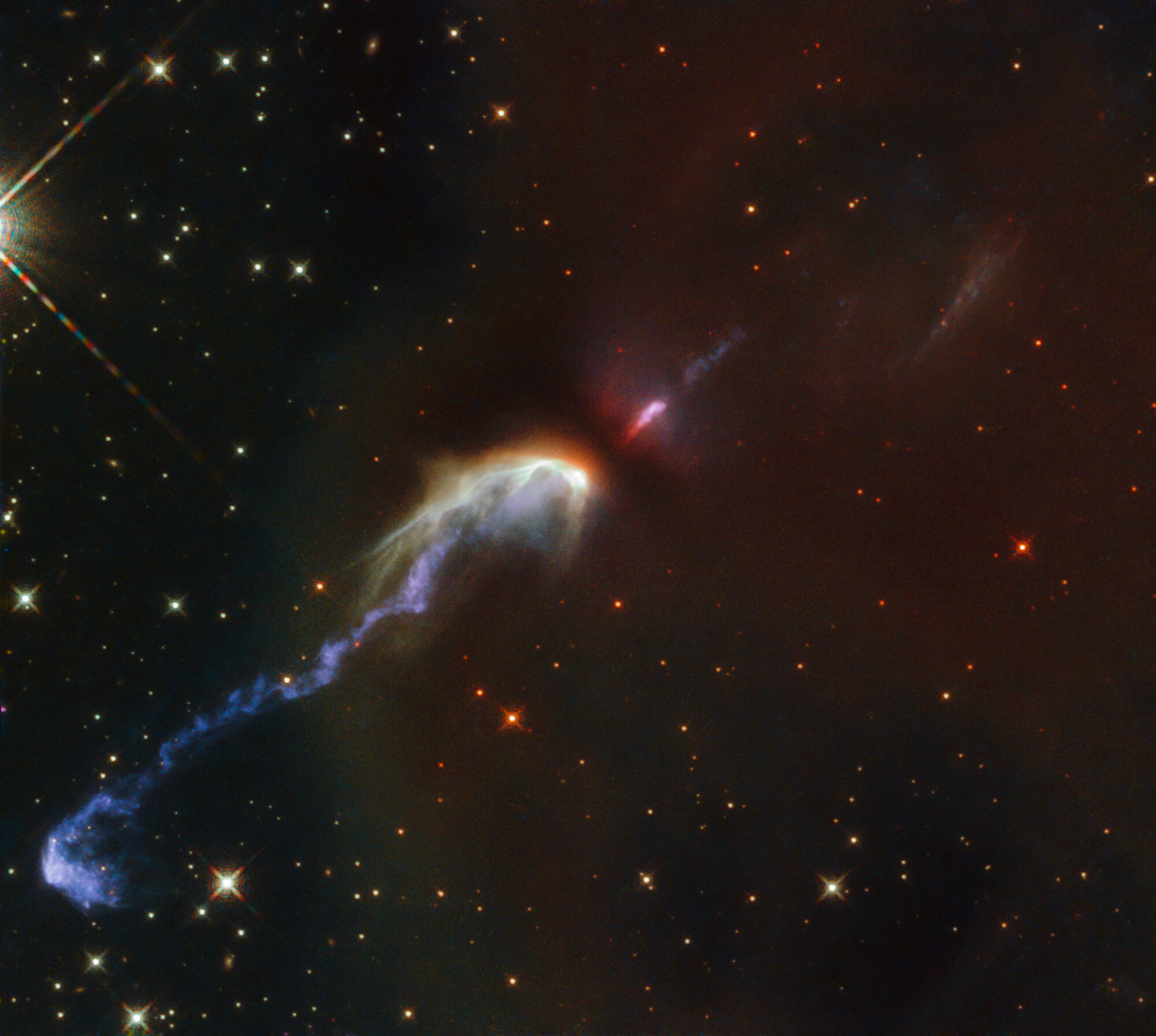 The never-ending nature of space is incredible to behold: Brilliant nebulae, massive spiral galaxies, orbiting planets, and everything in between offer up inspiring and mind-bending views, courtesy of our most powerful telescopes and exploratory spacecraft.

There has been no shortage of breathtaking space photos shared in 2021, from both the legendary, Earth-orbiting Hubble Space Telescope and from extraterrestrial missions. Take a minute to relax and take in the beauty of outer space and remember that, amid all these expressions of energy and matter swirling, expanding, and colliding across the universe, we’re right here in the middle of it all. That’s pretty cool.

These are the most stunning photos of space of 2021:

This image of a Herbig-Haro object was captured by the Hubble Space Telescope.
Credit: ESA/Hubble & NASA, B. Nisini

This captivating picture focuses on a newly formed protostar violently ejecting long streams of matter at incredible speeds, a rare phenomenon known as a Herbig-Haro object. As the matter hits surrounding gas, the collisions erupt in bright, colorful bursts. The star itself isn’t visible amidst this flurry captured by Hubble, but its presence is felt in the gap between the diagonal bursts.

NASA’s Perseverance rover captured a panorama of the Octavia E. Butler Landing site on Mars, providing us earthlings with an immersive, 360-degree view of its new Martian home as of Feb. 18. The sweeping vista of the 28-mile-wide Jezero Crater formed by a meteorite impact lets us imagine what it’s like to be right there along for the mission. Within Jezero Crater is evidence of an ancient river delta where water once ran on the surface of Mars, and Perseverance will be collecting data in the area as well as preparing samples of soil to be picked up and returned to Earth in a future mission. 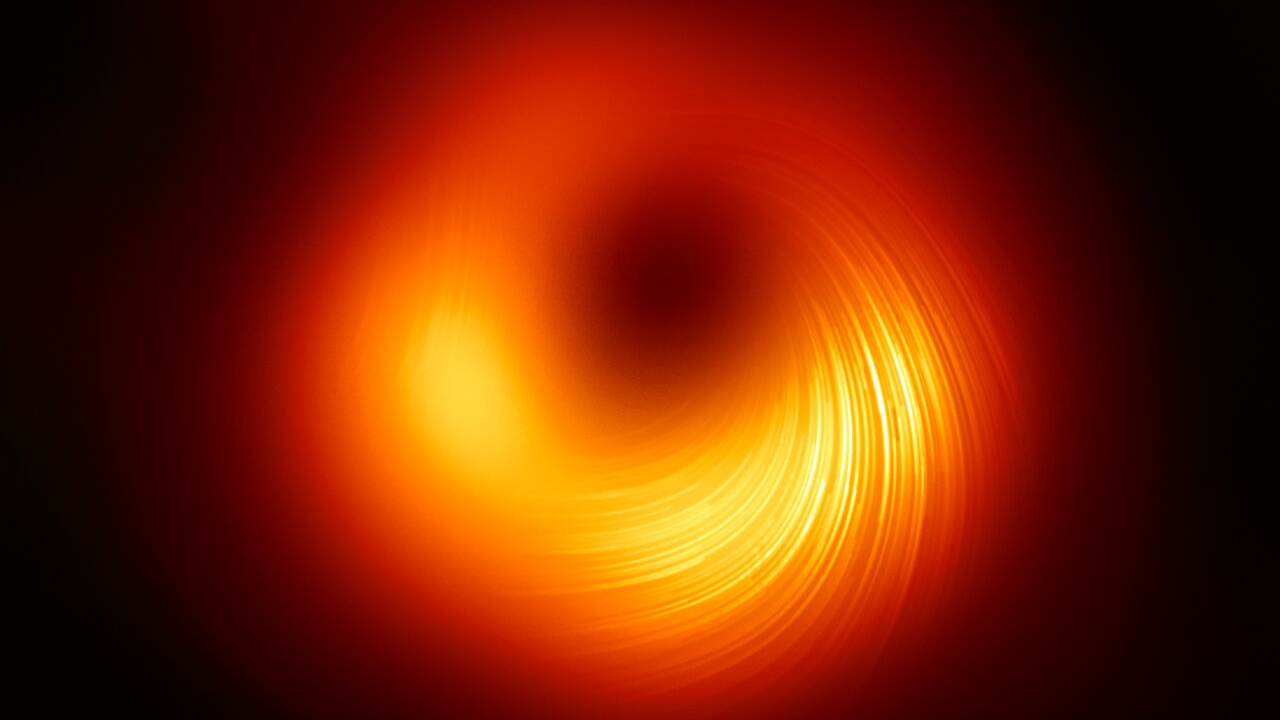 At the center of the Messier 87 galaxy some 55 million light years away lies a black hole. In 2019, a collection of scientists that observed the object using an array of telescopes around the globe released the first-ever image of a black hole, which depicts the light surrounding its dark center, almost like a blurry lava donut. In 2021, we got a new polarized image of the black hole created using more data compiled by the telescopes, which may look similar to the original image but gives new insight into this behemoth. The new lines seen in the ring of light show the gravitational field of this supermassive object, which in turn shows how it affects the material around it. 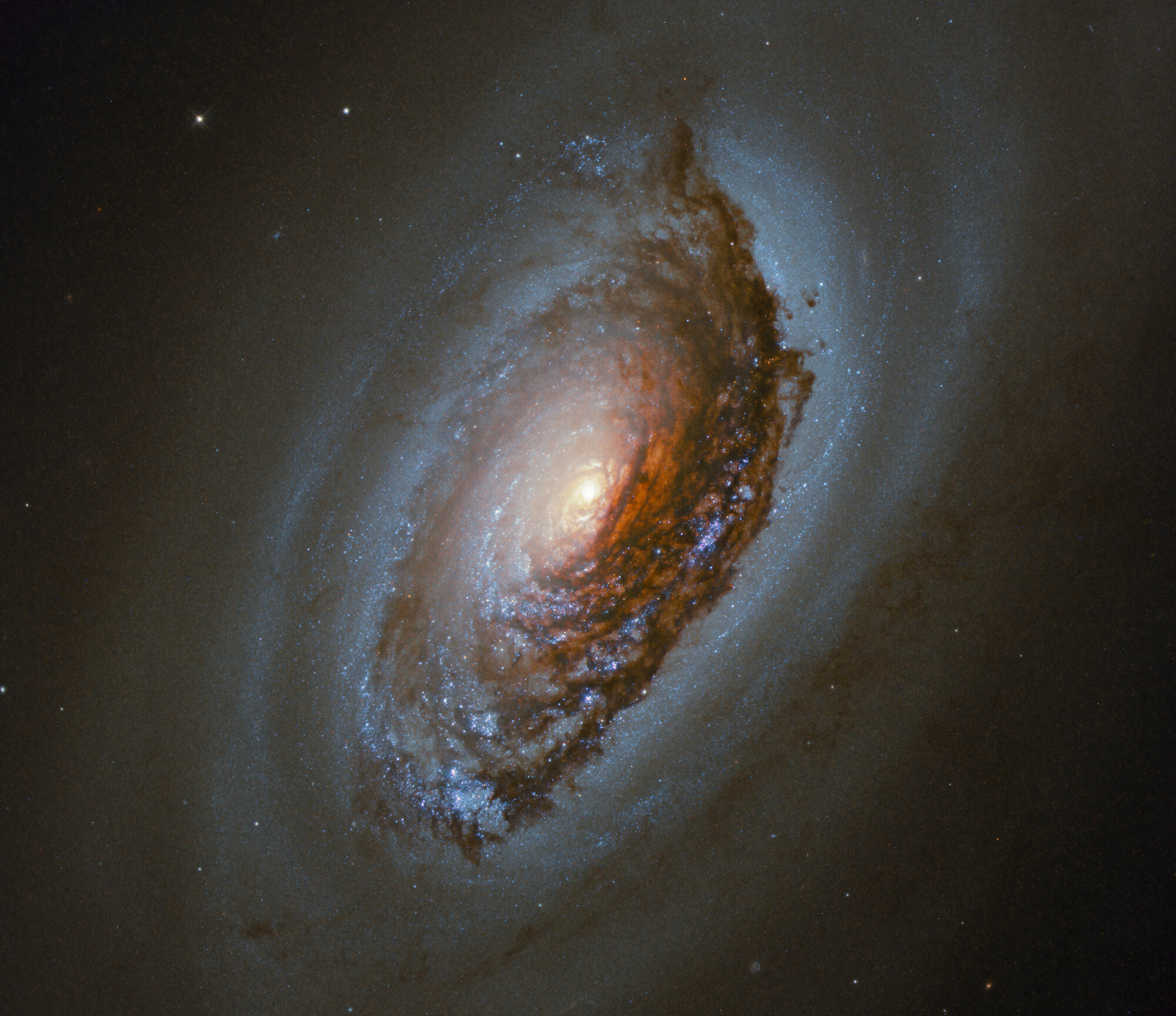 This galaxy is often referred to as the “Black Eye,” or “Evil Eye,” galaxy because of the dark band of dust that sweeps across one side of its bright nucleus.
Credit: ESA/Hubble & NASA, J. Lee and the PHANGS-HST Team; Acknowledgment: Judy Schmidt

NGC4826, also known as the Evil Eye or Black Eye galaxy, is a spiral galaxy about 17 million light years away from Earth. The gas in the inner part of the galaxy rotates in one direction, while the gas further away from the center rotates in the opposite direction, an odd trait for a galaxy. One theory suggests this is because Evil Eye is the result of two galaxies colliding. The dark, almost fluffy-looking gas that wraps its way throughout gives it an almost ominous appearance; hence, the name. 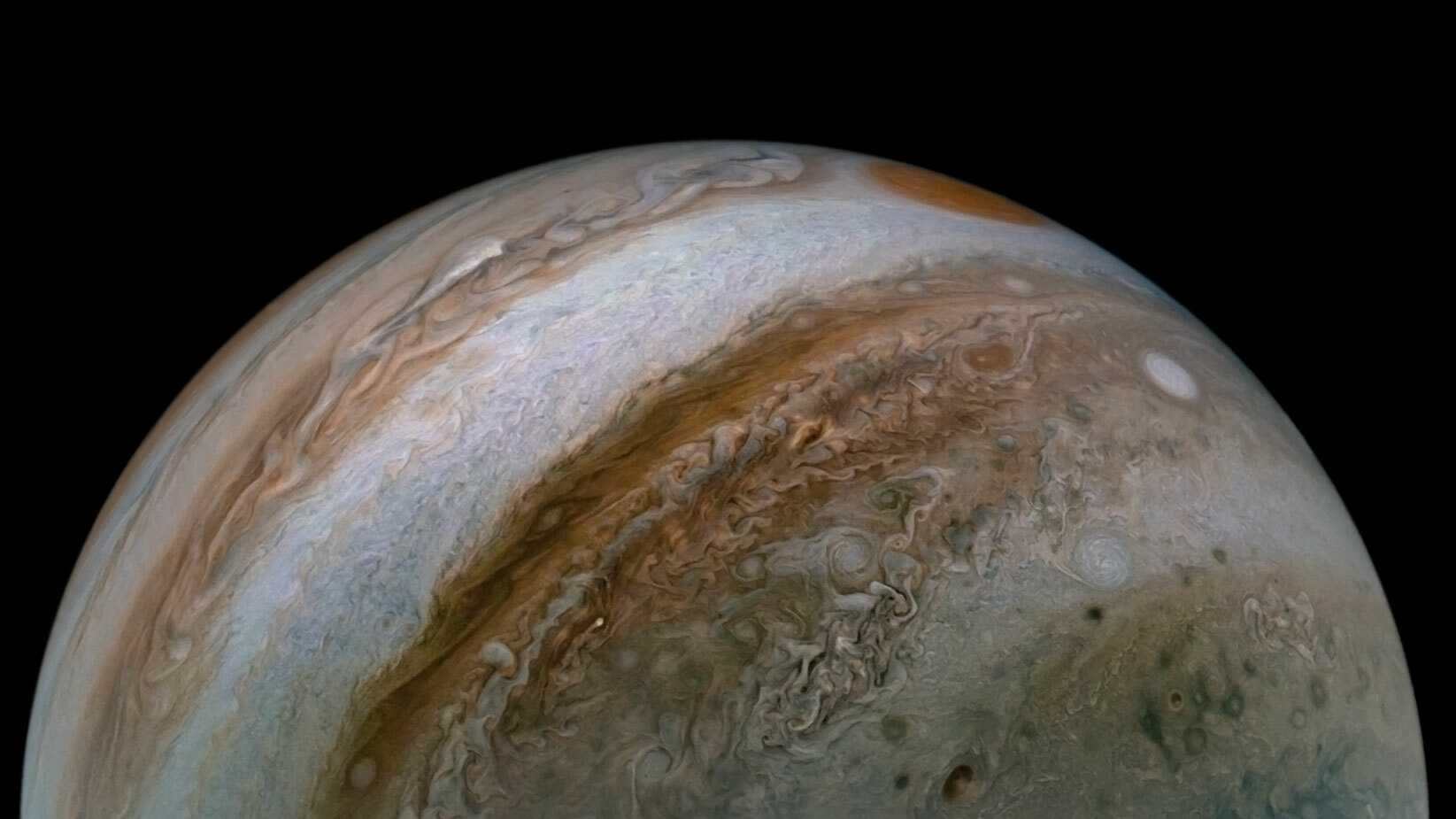 NASA’s Juno spacecraft has been orbiting Jupiter since 2016, collecting all kinds of data to demystify the big, billowy gas giant and help scientists understand more about our solar system. In this image taken by Juno and color enhanced by citizen scientist Tanya Oleksuik, we see an impressively vivid collection of circular, swirling storms amidst its gaseous bands that circulate south of its famous red spot. The turbulent atmosphere is downright mesmerizing. Jupiter’s atmosphere is made up mostly of hydrogen and helium and it doesn’t have a solid surface like Earth, so storms are constantly occurring. It’s biggest storm, the red spot, is twice the size of Earth and has raged for about 100 years. 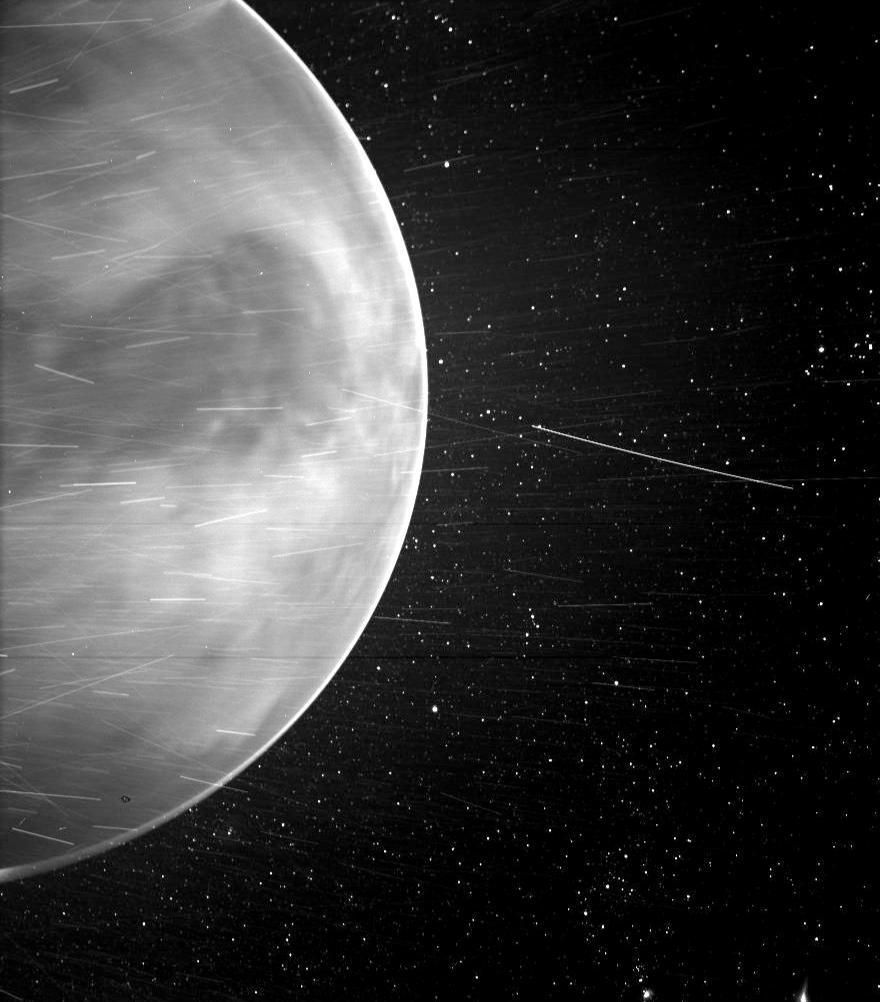 NASA’s Parker Solar Probe is on a hellish mission to the sun where it will gather as much data as it can before its fiery demise, and on the way it passed by Venus. This image, taken by the probe as it zoomed by in July 2020, gives an almost eerie look at one of our closest planetary neighbors. The dark area on Venus is part of the Aphrodite Terra highlands region, which extends around two-thirds of the planet and is home to plenty of flowing lava. The streaks of light that give the image so much life may be particles of dust lit by the sun, or maybe dust that collided with the probe. Stars dotting the background are just icing on the cake. 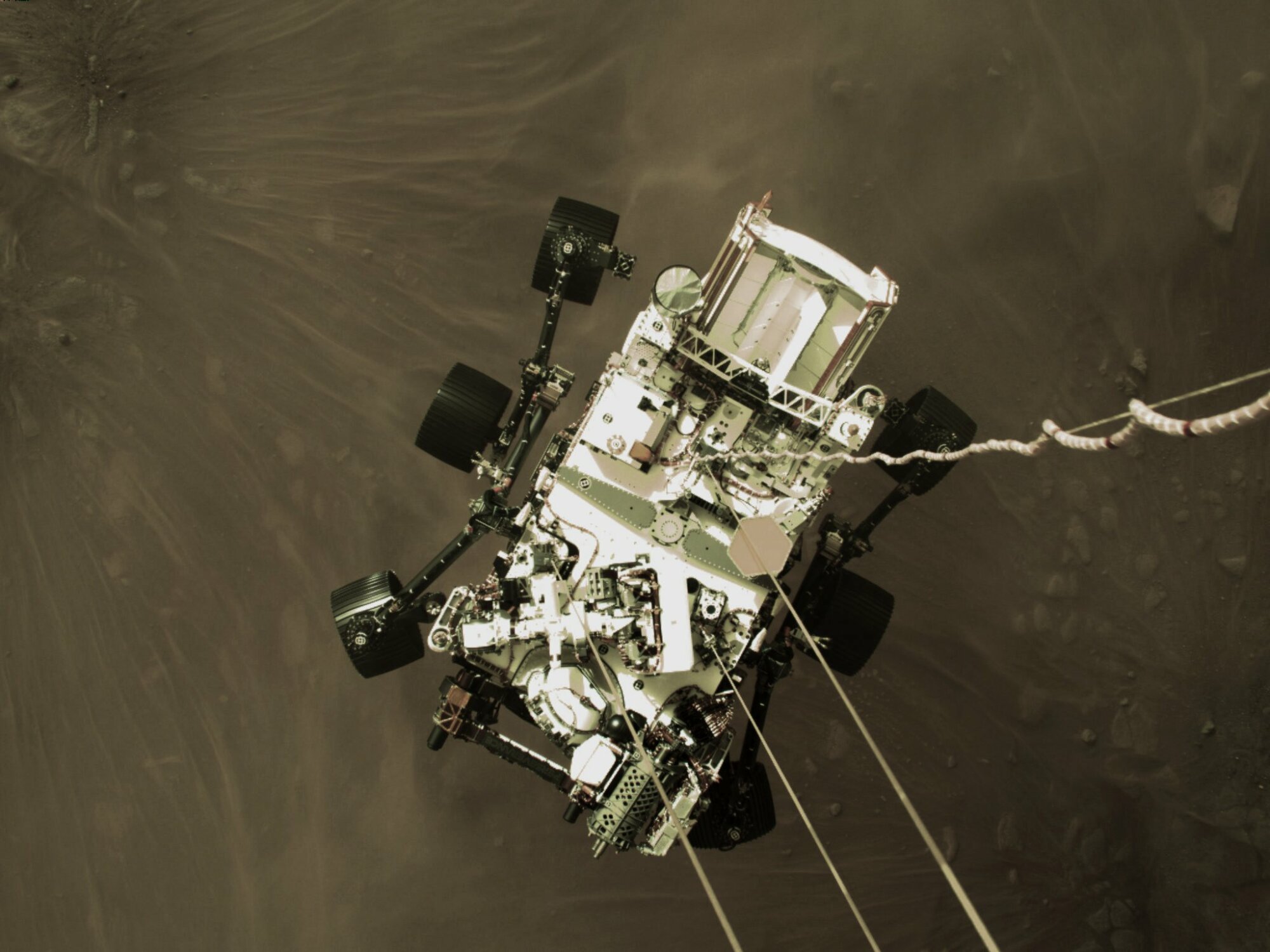 It’s a big year for Mars, in case you hadn’t already noticed. This image captures the moment just before NASA’s Perseverance touched the surface of the red planet where it will live out its days indefinitely. The dramatic photo was taken by the rover’s jetpack-like lander as it hovered 60 feet above the surface, lowering the rover softly to the ground. The rover traveled with the lander for almost 300 million miles to Mars, the pair entering Mars’ atmosphere at a blistering 1,000 miles per hour with not much more than a parachute to slow it down. Yes, the picture is a unique look at an extraterrestrial landing, but it also represents the collective relief and elation of countless individuals who worked for years to make this mission a success.

Perseverance’s most outta-this-world images of 2021 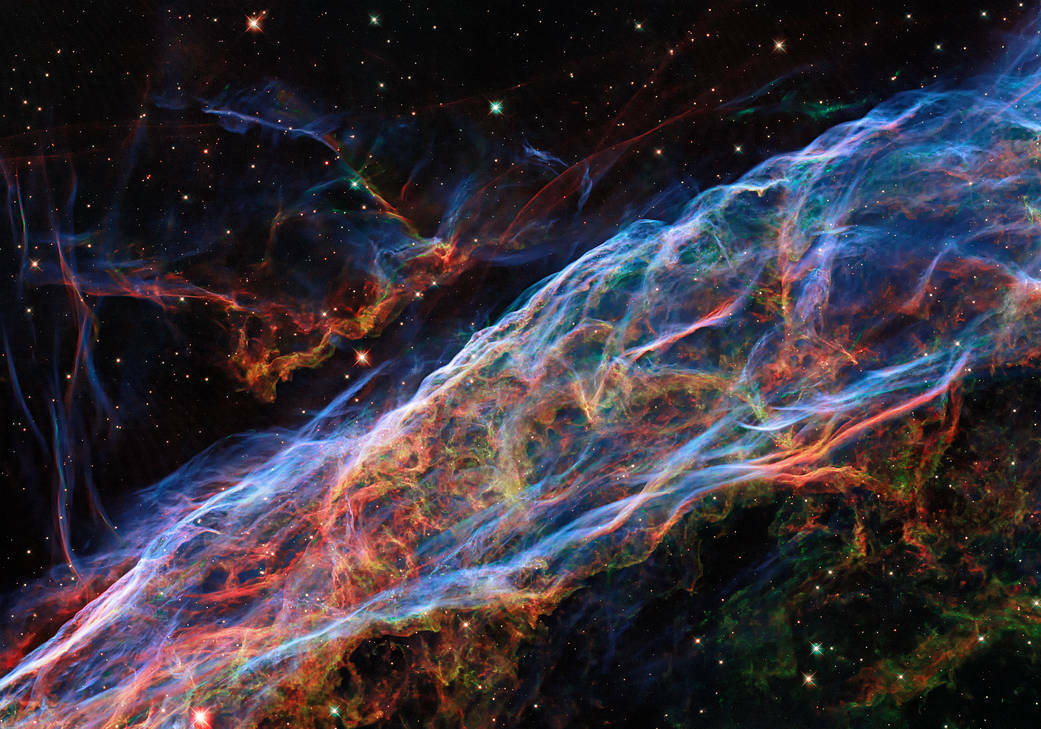 The Veil Nebula is supernova remnant that’s so large and bright that it can be seen from Earth in clear conditions (the best views are in the fall) with nothing more than a pair of binoculars. This new look at it from the Hubble Space Telescope uses five filters to show off the psychedelic array of ionized gases that make up its body. The nebula is about 2,100 light years away and this image is only a small piece of it. The nebula is estimated to be 130 light years wide, about 100 times wider than our own solar system. 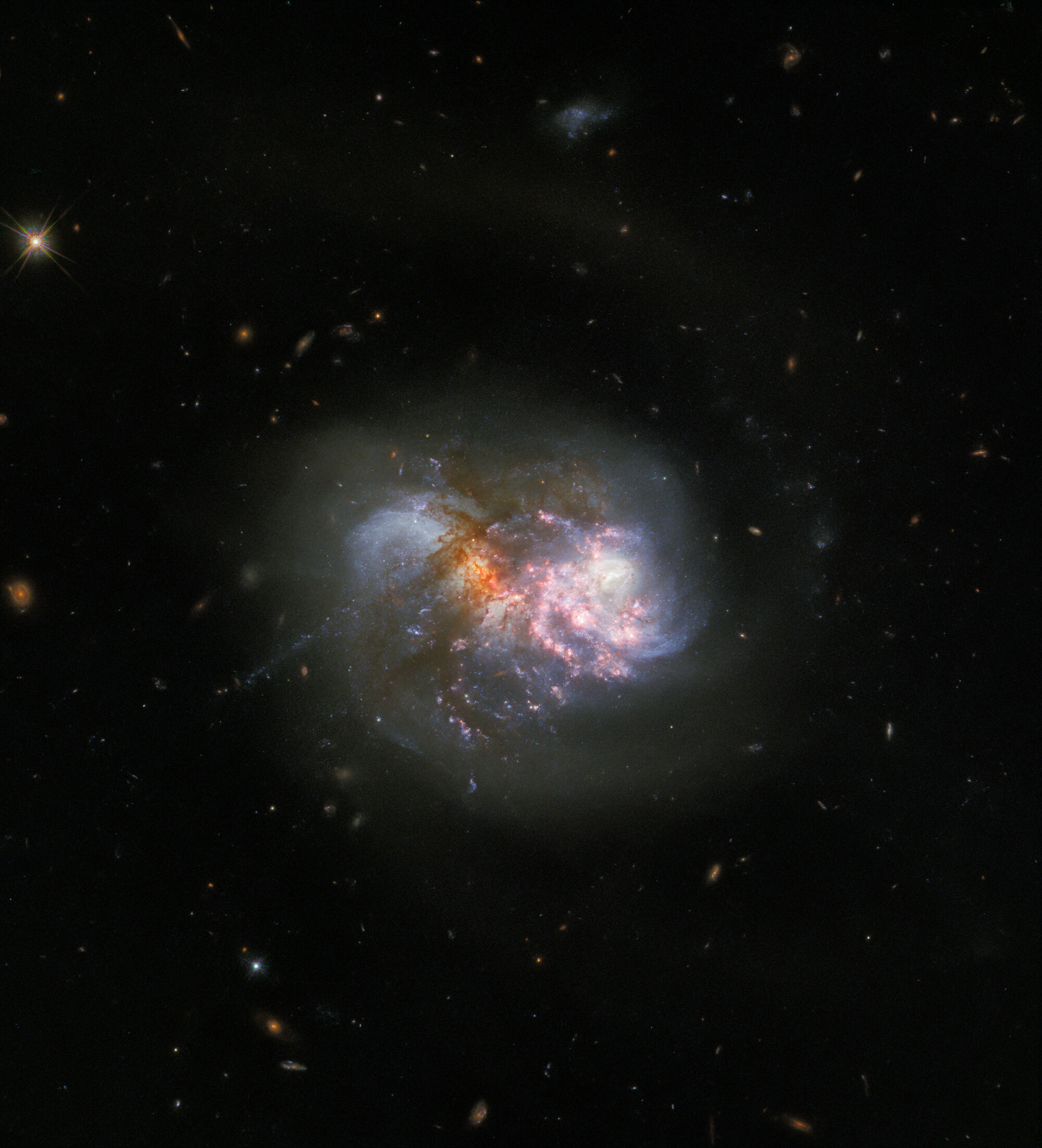 This image of IC 1623 is an updated, broader look at the interacting galaxy system that Hubble captured in 2008
Credit: ESA/Hubble & NASA, R. Chandar

IC 1623, captured by the Hubble Space Telescope, is known as an “interacting galaxy system.” What you’re looking at is the chaotic collision of two spiral galaxies. The duo is roughly 275 million light-years away from Earth, their coupling giving off a brilliant array of light wavelengths from across the spectrum. Eventually they’ll marry in a furious, dense blob known as a starburst galaxy. 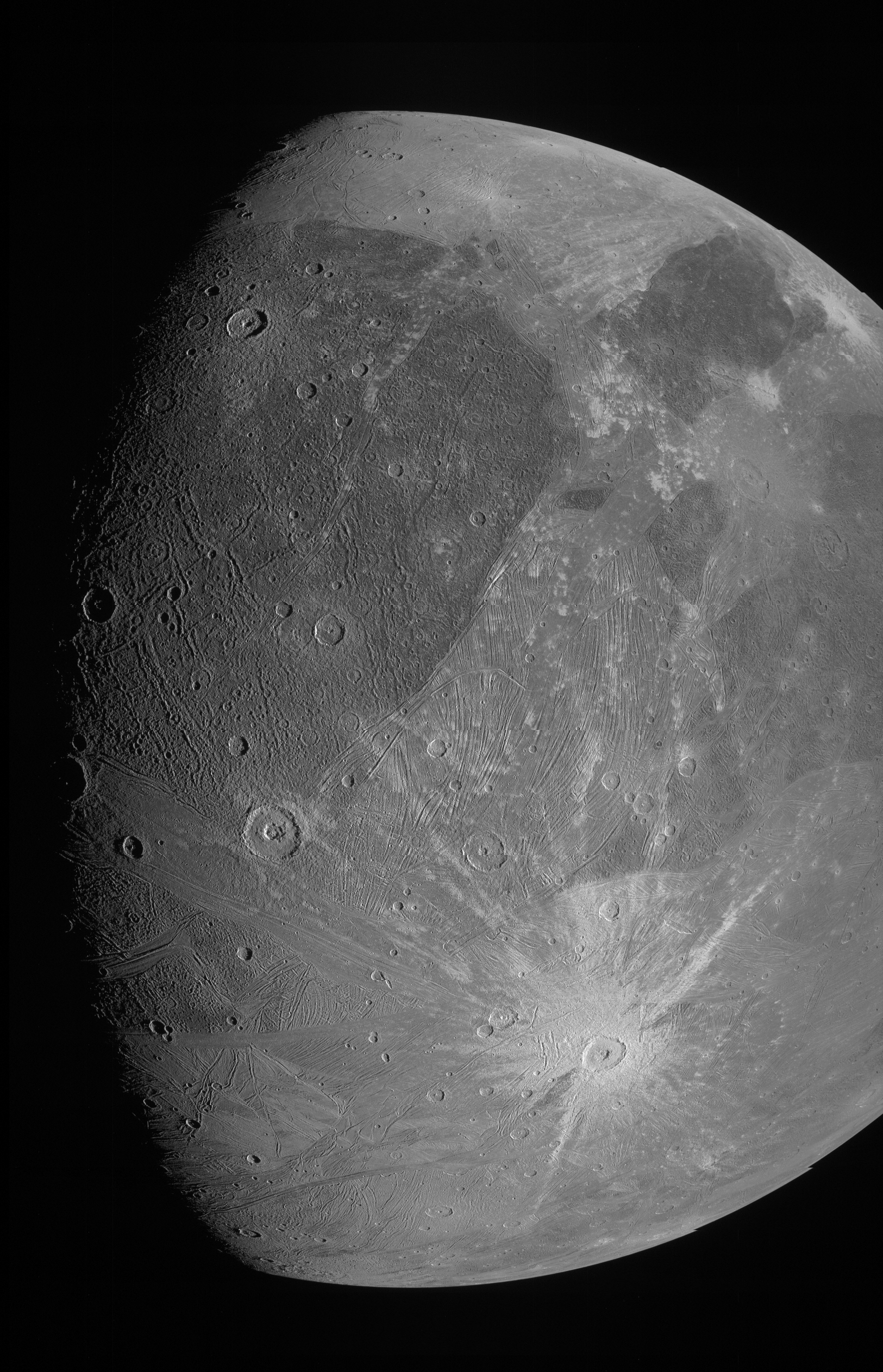 Ganymede, which orbits Jupiter, is the largest moon in our solar system.
Credit: NASA/JPL-CALTECH/SWRI/MSSS

Jupiter’s icy moon Ganymede was captured in vivid detail by NASA’s Juno spacecraft in June. Ganymede is the biggest moon in our solar system — it’s actually bigger than the planet Mercury. Similar to a handful of other moons in our system, there’s evidence pointing to a liquid ocean lurking below its thick, icy crust. While Juno’s primary focus on its trip is Jupiter itself, the spacecraft also collected data about Ganymede’s surface, composition, atmosphere layers, and magnetosphere. 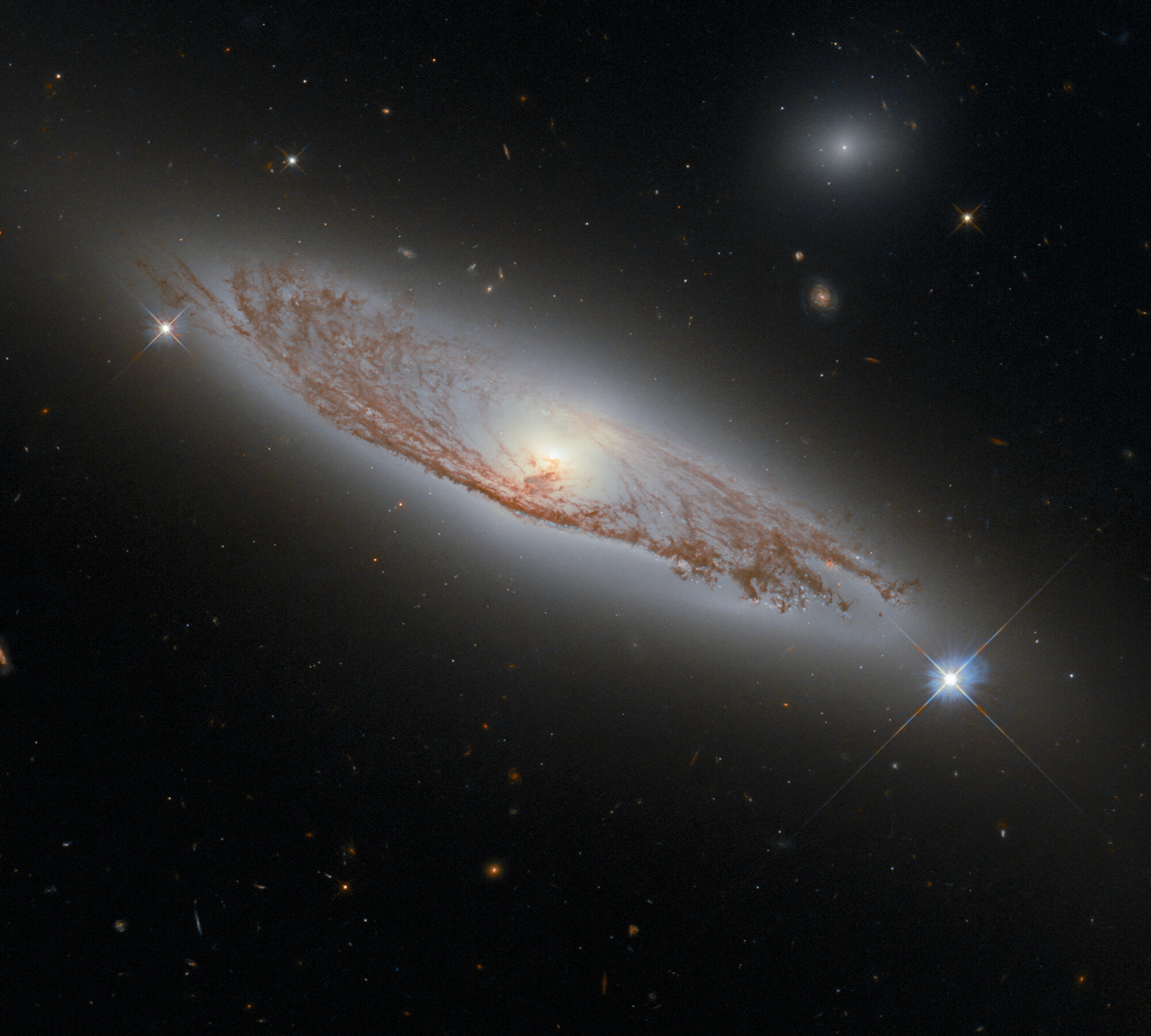 Roughly 150 million light-years away sits NGC 5037, a spiral galaxy that, from our viewpoint, appears to be chilling at a nice, relaxed angle. NGC 5037’s dusty gaseous arms swirl outward from its bright core, illuminated by star-forming activity. Despite spiral galaxies being the most common form of galaxy in the observable universe, their massive structures are extraordinary sights through the eyes of the Hubble.

A star that lived fast and is dying young One of the brightest stars seen in our galaxy is called AG Carinae. Its bright and colorful form is an indicator that it’s nearing the end of its life.
Credit: NASA, ESA and STScI

In celebration of Hubble’s 31st birthday, NASA and ESA shared this brilliant photo of the star AG Carinae. AG Carinae is what’s known as a luminous blue variable, an ultra-bright star classified for its short, convulsive life. This massive star was formed just a few million years earlier than this image shows, its size causing conflict between the inward influence of gravity and the outward force of radiation. The ring around the star was caused by an outburst of radiation stretching 5 light-years wide. Luckily it’s not our closest solar neighbor, which sits at just about that same distance away.

A hurricane, from above 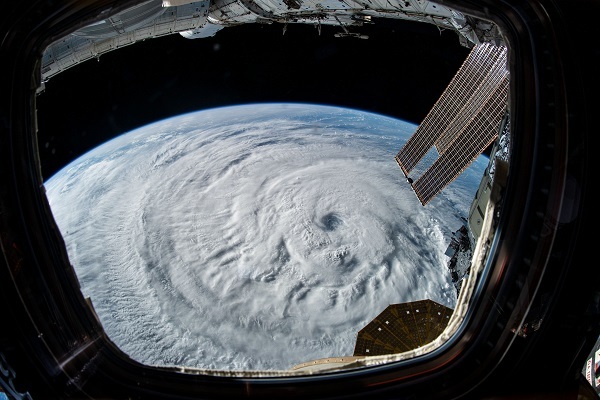 Hurricane Larry as seen from the ISS.
Credit: NASA

Hurricane Larry landed as a Category 1 in Canada in September. In this photo taken from the cupola of the International Space Station, Hurricane Larry’s swirls can be seen from above. NASA selected this image as one of the best taken on the ISS this year.

Off to deep space 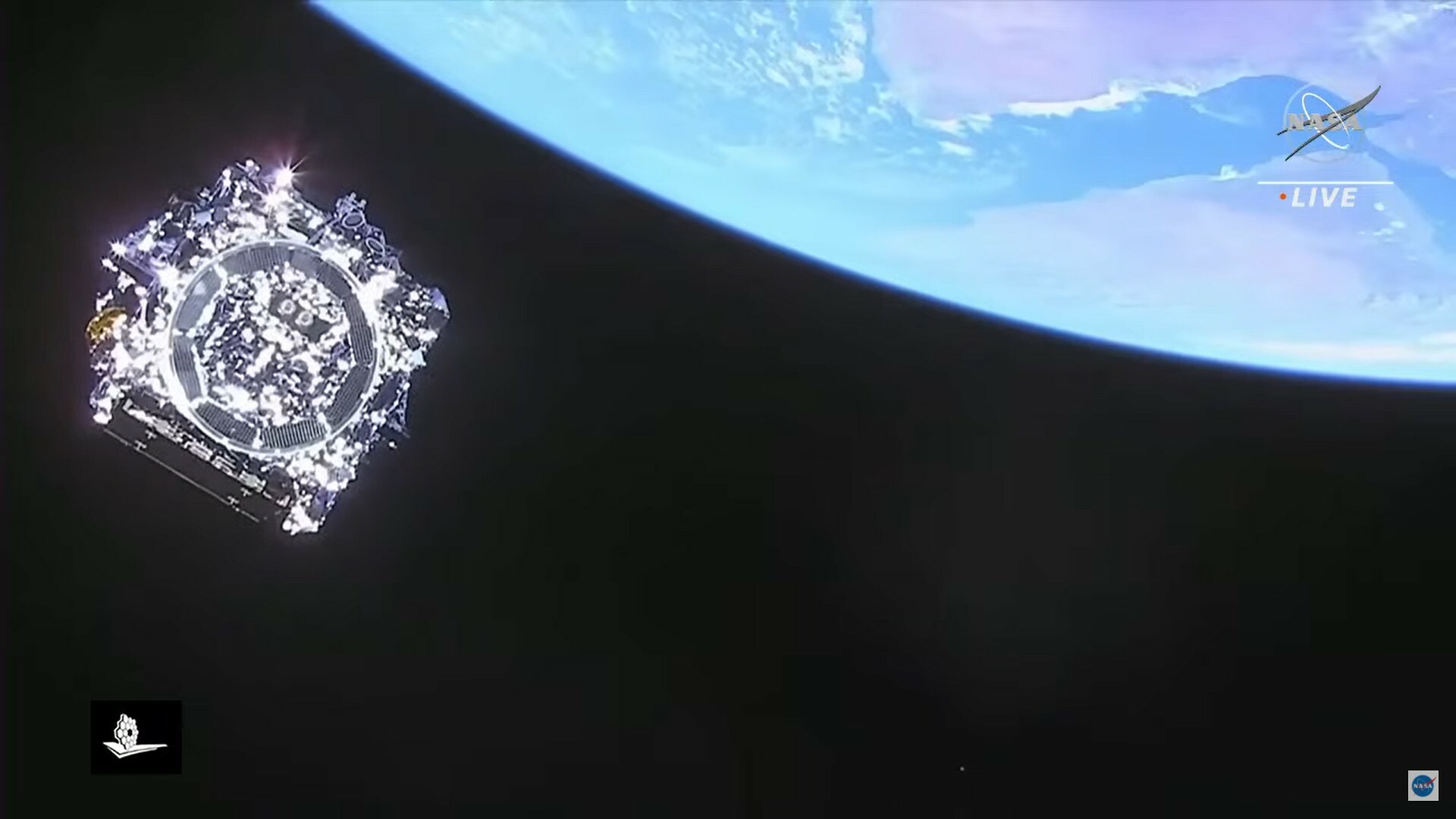 The most powerful space telescope ever made successfully launched on Christmas Day, and the James Webb Space Telescope is currently making its way into deep space. This image, shared by NASA, is a final shot of the telescope as it separated from the rocket that transported it off Earth.

A total eclipse, as seen from space 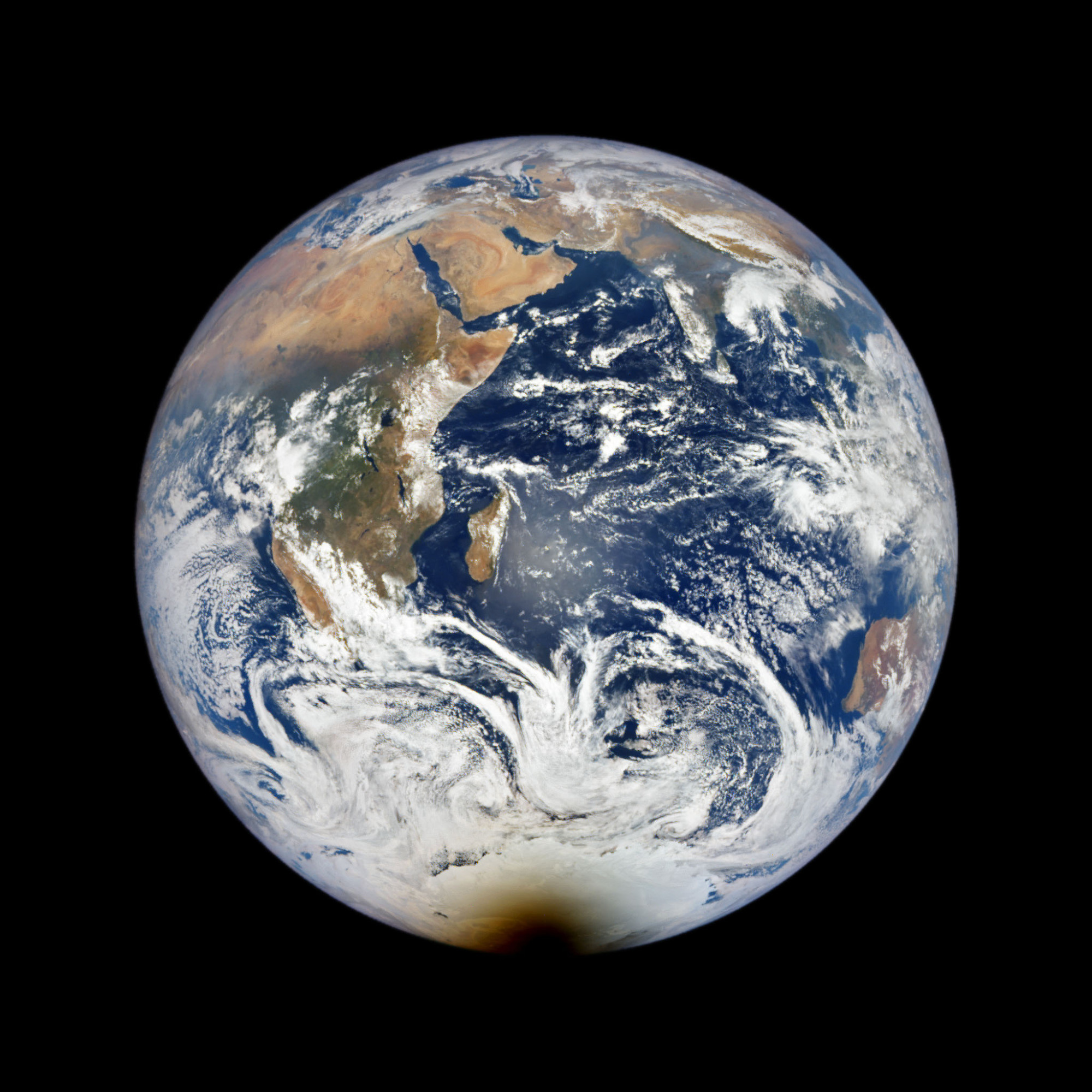 Check out that darkened spot over Antarctica.
Credit: NASA

A total solar eclipse was on display in Antarctica on Dec. 4. In this image, captured by a powerful camera aboard the Deep Space Climate Observatory satellite, the moon’s shadow looks like a black smudge over Antarctica. 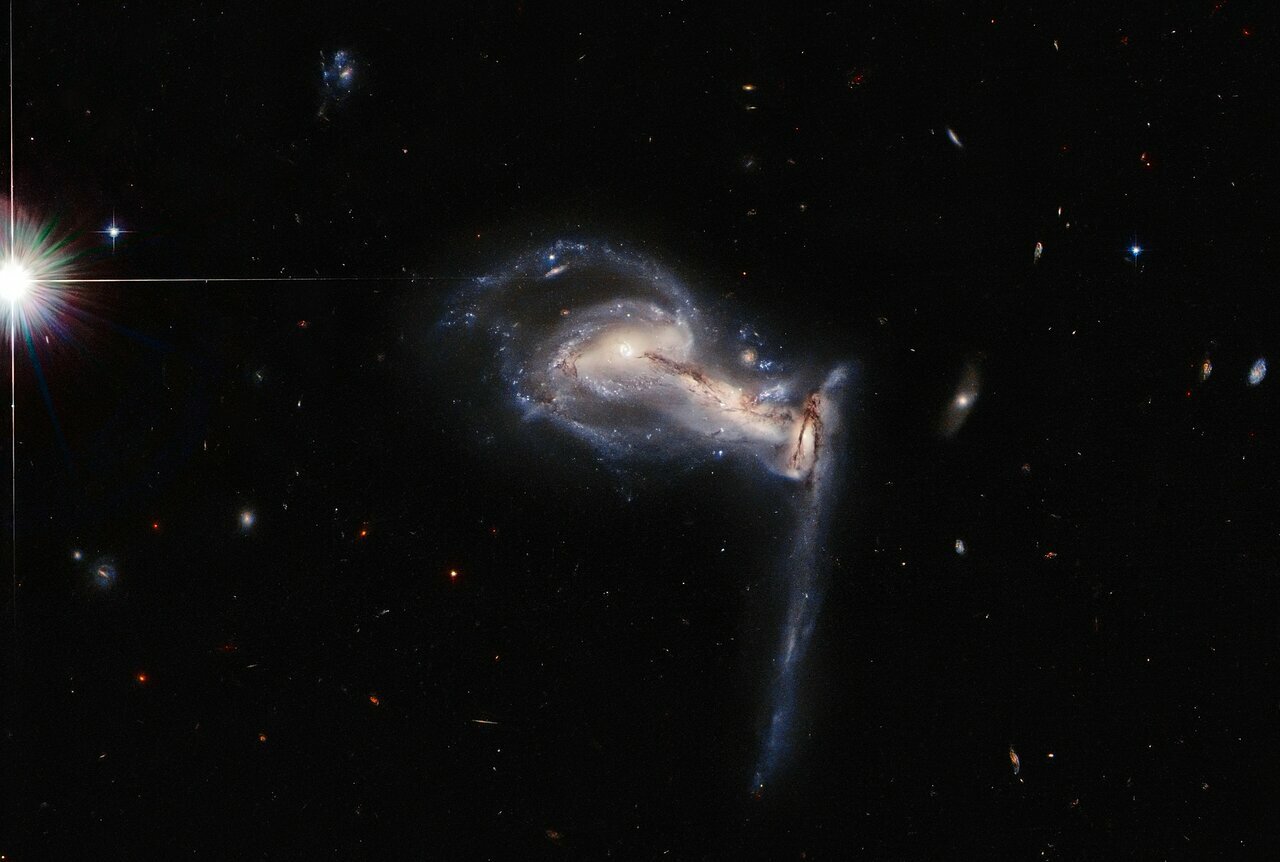 A trio of galaxies from Arp 195, a system categorized in the Atlas of Peculiar Galaxies.
Credit: ESA/Hubble & NASA, J. Dalcanton

The Hubble Space Telescope captured a trio of galaxies in the Arp 195 system, which is listed among some unusual company in the Atlas of Peculiar Galaxies. 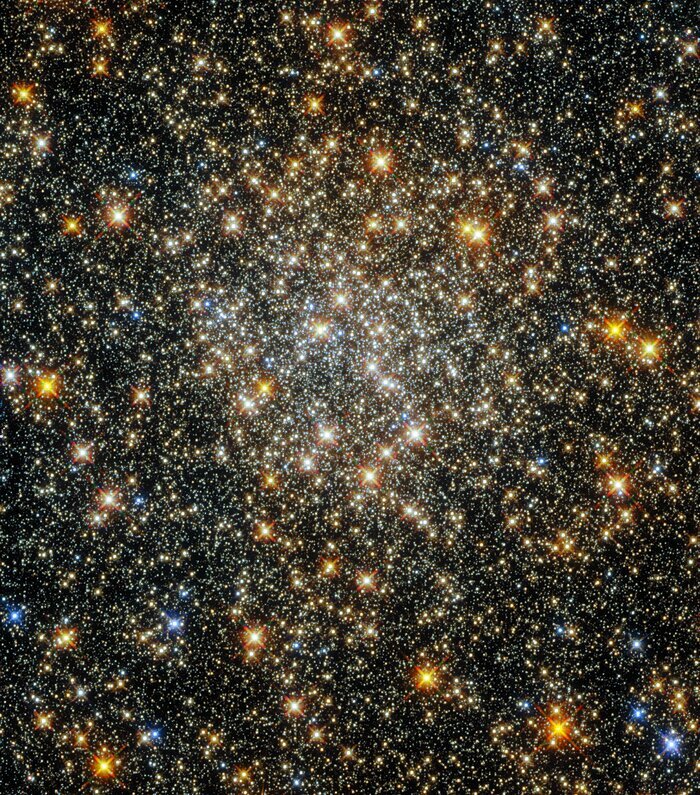 Near the center of the Milky Way lies this cluster of stars, as pictured by the Hubble Space Telescope’s Wide Field Camera 3 and Advanced Camera for Surveys. 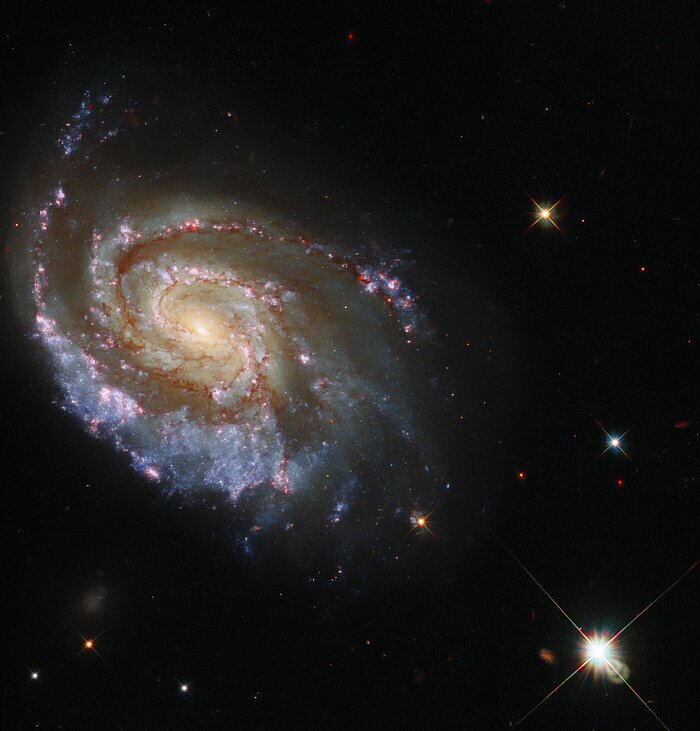 NGC 6984 is a spiral galaxy that’s 200 million light-years away from Earth. The Hubble Space Telescope has captured this beauty before in 2013.