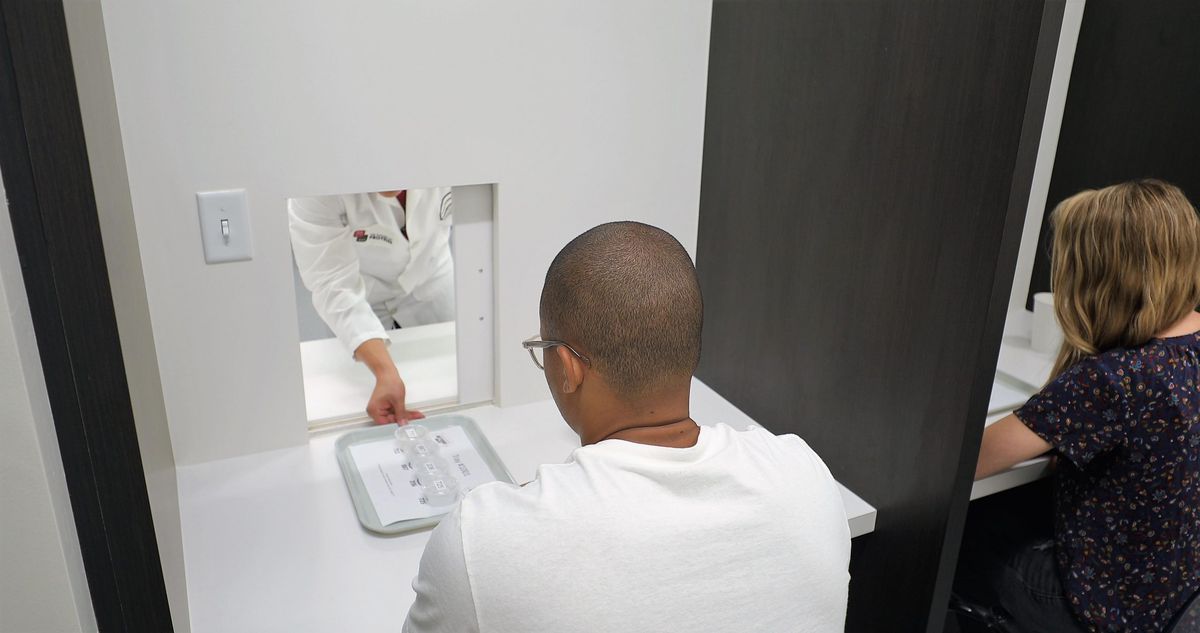 I cover the plant-based food industry for Vox, so I get a lot of free food samples. A lot. Some of the products that startups mail me are delicious, many are just okay, and a few have been downright awful, bad enough to make me wonder out loud, “Why are they letting people eat this stuff?”

A plant-based steak from the startup Juicy Marbles in Slovenia was meaty and, well, quite juicy, while another startup’s steak was watery and flavorless. A new plant-based milk product from Silk, one of the more established brands, was rich and smooth, while a new startup’s milk was much too sweet and left behind a chalky aftertaste.

I’ve also sampled enough vegan chicken nuggets and tenders to feed a small village, though that village would be left gastronomically unsatisfied, as most were mediocre, with only a few standouts: nuggets from VFC and Tindle, and wings from Simulate.

Want to eat less meat but don’t know where to start? Sign up for Vox’s five-day newsletter full of practical tips — and food for thought — to incorporate more plant-based food into your diet.

The new foods I’ve tried are just a smattering of what’s on offer from the dozens and dozens (and dozens) of plant-based startups that have sprung up in recent years, fueled by billions of dollars in venture capital cash. It’s the vegan gold rush, and while all that investment has been great for the companies, I worry about the downside for consumers and the plant-based movement: a glut of mediocre products.

The vegan gold rush is a direct effect of the sheer difficulty of changing hearts and minds — not to mention diets — on meat-eating by trying to appeal to consumers’ stomachs. Nearly all meat, milk, and eggs are produced on factory farms that pose a risk of incubating the next pandemic while polluting the air and water, not to mention condemning animals to a lifetime of misery and subjecting meatpacking workers to hazardous conditions.

Despite a majority of Americans telling pollsters they support a societal shift toward plant-based eating, moral pleas have largely gone unrequited: US per capita meat consumption continues to rise, while global meat consumption (excluding fish) jumped from 65 pounds per person in 2000 to 75 pounds in 2019 and is projected to increase significantly in coming decades, especially in low- and middle-income countries.

The new generation of animal-free meat, milk, and eggs has been promoted as a way to shortcut the moral debate by using technology to make plant-based ingredients taste uncannily like animals. If that can happen, the thinking goes, consumers will be more eager to switch over because they won’t feel as though they’re sacrificing their taste buds to their ethics.

It’s much too early to tell if that theory of change is right. It usually takes decades, not years, for a new technology to achieve widespread adoption, and many never do. The same goes for new culinary categories. But for that shift to happen on a wider scale, plant-based foods need to deliver on their gastronomic promise, and the glut of mediocre products that have landed in my mailbox certainly isn’t going to help the sector’s long-term goal, and may very well threaten it.

“If there’s a plethora of really poor products on the market, and people who don’t do their research or haven’t been exposed to [better] products choose one of those as their first foray into plant-based foods, that can certainly create a negative halo around the category,” says Jennifer Bartashus, a senior analyst at Bloomberg Intelligence.

It’s hard to tease out the effect of sub-par products on the broader plant-based meat sector, but after years of startups capturing the public’s curiosity — and food dollars — there is evidence that the category is starting to plateau.

The president of Maple Leaf Foods, a major Canadian food company that entered the plant-based market in 2017, said in a February 2022 earnings call that the refrigerated plant-based meat category experienced explosive growth in 2019 (59 percent) and 2020 (75 percent), but just 1 percent in 2021. His explanation: “Consumers’ needs simply were not met, and they did not repeat purchases.”

Plant-based meat is hurting at the drive-thru too; analysts say sales of McDonald’s McPlant burger, made with Beyond Meat, are lower than anticipated. The single largest Burger King franchise operator in the US said in late 2020 that Impossible Whopper sales had fallen by half from around 30 per store per day compared to when it first launched in August 2019.

It was unrealistic for the explosive growth of the past few years to be sustained, and many players in Big Food are as bullish as ever on plant-based food. For example, Nestlé is quickly launching new products across Europe (hopefully not too quickly, though), while Unilever has pledged to make one-fifth of its ice-cream portfolio dairy-free by 2030.

But to meaningfully displace conventional animal agriculture, the plant-based sector will need to entice disengaged consumers with new and superior offerings; after all, according to one survey, consumers say novelty and curiosity are their primary motivations to give meat from plants a shot. Producers maintaining a much higher bar for taste and texture will be key.

One lesson that can be learned from the biggest players in the field is that patience pays. Impossible Foods was in stealth mode for five years developing its burger before it launched, and it’s now available in every Burger King. Eat Just toiled away on its egg product for almost six years and it says it now has 99 percent of the US plant-based egg market (though they have very little competition). Beyond Meat spent several years on its flagship burger before its massive IPO in 2019. The company says it allocates 14.4 percent of its net revenue to R&D.

Today, though, many startups are putting out products just a couple of years after securing funding, and unreasonable expectations from investors could be a cause. “We are seeing more generalists [investors] enter the space and we’re seeing that education is important so they understand what’s happening in order to make the products that they’re backing,” says Laine Clark of the Good Food Institute, a nonprofit that advocates for alternative proteins like plant-based and cell-cultured meats. “When these startups come to market with a product, they’re taking a significant risk that consumers won’t give the brand a second chance if the first experience isn’t pretty darn good.”

But much of the blame can’t be laid at the feet of investors; startup founders, like the rest of us, can be too optimistic in estimating how long something will take to do, says Josh Tetrick, CEO of Eat Just, which makes plant-based eggs and cell-cultured chicken meat. “An entrepreneur truly will believe that they [can launch a product] in 18 months, let’s say, and they’re raising capital to do that, and they made that outside commitment [to investors]. And understandably so, now there’s pressure and expectations to do that.”

One upside of getting a product to market — even if it’s too soon — is that it can light a fire underneath startups to make it better. “When you know something is out there, there is a bit more of a motivation to improve it,” Tetrick says.

And when startups feel they have improved a product, some use it as an opportunity to communicate their iterative approach to consumers. While food companies are constantly reformulating their products, some plant-based startups number each reformulation like a software company would; for example, Beyond Meat is now on version 3.0 of its “beef” burger, while Simulate is on version 2.0 of its “chicken” nugget.

Consumers say taste is the top factor when deciding which meat alternative brand to buy, but “clean labels/recognizable ingredients” comes in second. Bartashus argues that too many startups are shaping products around that second expectation, which could also help explain the mediocrity of the results. “So if the focus is on all-organic, non-GMO, and all-vegan, and it’s got no gluten — you’re in the pursuit of labels that sometimes you lose sight [that] the product itself has to taste good.”

All food companies conduct taste tests, but when I visited Beyond Meat’s headquarters earlier this year, it was apparent just how seriously they take feedback. The company has a room dedicated to gathering it, conducting dozens of sensory tests each week, and third-party off-site taste tests too.

“The room was specifically designed to remove bias — from the paint color on the walls to the light bulbs used in the booths — to ensure that we can get unbiased real-time feedback on our product development work,” a Beyond Meat spokesperson told me over email.

If big R&D budgets, rigorous taste-testing, and mega-celebrity partnerships (Beyond Meat just appointed Kim Kardashian as its “chief taste consultant”) aren’t enough to dethrone animal meat from the center of the plate, cell-cultured meat — created by taking a small sample of animal cells and growing them in bioreactors — might win over consumers, at least on taste.

During a recent trip to San Francisco, I tried cell-cultured salmon, chicken, bacon, sausage, burgers, and meatballs. While some were 100 percent cell-cultured — meaning they were biologically almost identical to meat from animals — most included both cell-cultured and plant-based ingredients. But one thing was for certain: All of the products were noticeably meatier — juicier, firmer, and tastier — than their purely plant-based counterparts.

Whether these startups will be able to produce cell-cultured meat at scale at an affordable price point, and get consumers on board with such a novel food product, is an open question. They currently lack US regulatory approval to commercially sell their products, and in Singapore, the one country that has approved a cell-cultured product, Eat Just is selling its chicken nuggets at a loss.

The distance that even the best startups still have to go to make hyperrealistic analogues — despite billions in collective investment — illustrates just how hard it is to make plant-based meat, milk, and eggs that can compare to conventional products. And easy money might be drying up; venture capital firms are tightening their belts in the current economic environment.

We’re in the boom times of the vegan gold rush and, eventually, many startups will go bust. That’s just the nature of Silicon Valley and the business cycle more broadly. If a tech startup goes bust with a bad product, however, it doesn’t sour people on computers and smartphones. But there’s a real risk that if the plant-based industry doesn’t improve its offerings, all that consumers will be left with is a bad taste in their mouths.