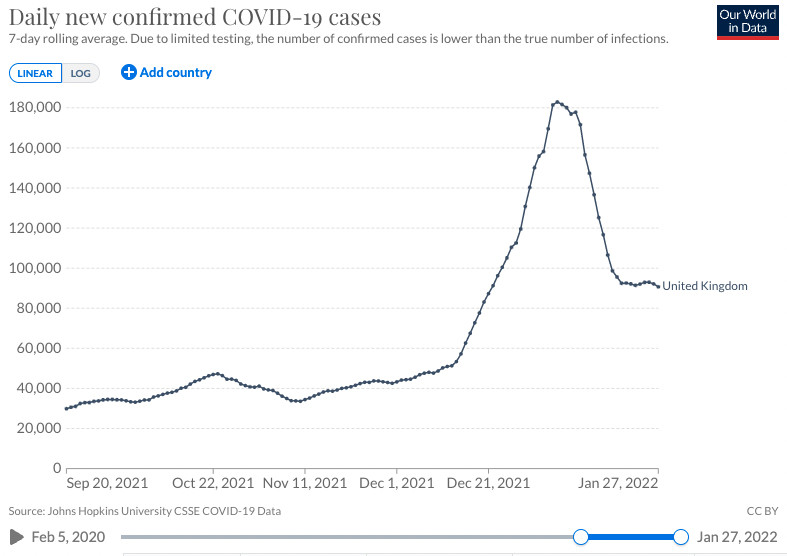 The omicron variant of Covid-19 was discovered less than three months ago, but it rocketed case numbers to record highs. Yet almost as rapidly as they rose, new infections plummeted in countries like the United Kingdom, South Africa, and now the United States.

Omicron caused some of the pandemic’s tallest, sharpest spikes in Covid-19 infections as it overtook previous variants like delta, but several waves triggered by earlier variants followed a remarkably similar pattern. Almost as steeply as cases rose, they fell.

Why did this happen? Why didn’t omicron cases rise and fall slowly — or level out at a high or moderate level?

“I think you may get different answers from different experts,” said Eleanor Murray, an epidemiologist at Boston University, in an email. This isn’t just a curiosity: Researchers are trying to tease out the reasons in the hope of flattening peaks in the future.

Understanding why cases are rising and falling is crucial for figuring out what kinds of public health strategies are working. It’s also important for anticipating what comes next and how to deploy resources like medical workers, hospital beds, vaccines, and treatments.

The Covid-19 spikes we’re seeing are not just an intrinsic fact of nature. They’re partly a consequence of how we respond — or don’t — to changes in the virus and in our society. And as steep spikes are eventually replaced by shallower slopes, they will also reveal when the acute Covid-19 pandemic has ebbed and given way to an endemic disease.

The omicron variant of SARS-CoV-2, the virus that causes Covid-19, appeared at just the right time to cause a huge infection spike. It took root in the Northern Hemisphere as holiday travel picked up and cooler temperatures pushed people indoors, helping it travel long distances and spread locally through person-to-person contact.

Omicron also had the right mix of traits to catch fire. The omicron variant contains mutations that allow it to better evade immune protection while spreading faster than any prior known variant. Even people vaccinated against Covid-19 began getting infected in large numbers as protection from their initial doses started to waver, though most experienced mild symptoms. All these factors together led to lots of infections happening very quickly.

“It has infected everybody that could be infected out and about — and that means automatically it will run out of people to infect and start coming down as fast as it went up,” said Ali Mokdad, an epidemiologist at the Institute for Health Metrics and Evaluation at the University of Washington.

While omicron has been the most extreme example of this phenomenon, earlier variants also caused sharp spikes and declines. South Africa, for instance, saw distinct peaks associated with different variants. Most of these peculiar “stalagmites” in South Africa were symmetrical except for the delta wave last summer, which saw a brief resurgence on its way down.

“[T]he shape of a spike then decline is what we generally expect in a single population,” said Justin Lessler, a professor of epidemiology at the University of North Carolina School of Public Health, in an email.

A key variable is the basic reproductive number of the virus, or R0, which is the average number of people that one infected individual tends to infect. “If that number is above one, the epidemic grows exponentially; if it is below one, it declines exponentially,” Lessler said.

As more people get infected with a coronavirus variant, there are fewer people left to infect. When the basic reproductive number falls below one, new infections reach their peak and then decline. To plateau, the rate of new infections has to stabilize somewhere near one, but that would require an unusual set of conditions, according to Lessler.

The idea that disease outbreaks are generally symmetrical is an old one. William Farr observed in the 1840s that smallpox epidemics followed a mathematical pattern, though his formula, known as Farr’s law, resulted in a bell-shaped curve. But diseases rarely follow such neat curves.

“That has been generally discredited as a ‘law’ since it doesn’t allow for things like changes in susceptibility due to different levels of immunity/immune waning, movement in and out of populations, and changes to risk and exposure behaviors,” said Murray.

That’s been evident during the Covid-19 pandemic. Some countries like South Korea saw more gentle hills as different variants took root, while others like Brazil experienced asymmetrical, jagged peaks throughout the pandemic. Some of that is due to delays in identifying and reporting cases. In some places, variants like delta and omicron overlapped. At the country level, case curves can change shape as the pandemic spreads over time from urban to rural areas or can peak at different times depending on the region.

Then one has to account for public health interventions. Vaccines offer significant immune protection (and recovery from Covid-19 can be protective too). Measures like wearing face masks, limiting public gatherings, more rigorous testing, and boosting vaccination efforts also assist in “flattening the curve” and help waves to crest. People also change their behavior in response to rising infections. In the US, surges in vaccination and testing followed spikes in cases.

“That increase in testing and implementation of public health interventions helps us not only reduce transmission, but also more accurately and timely identify dips in cases,” said Saskia Popescu, an infectious disease epidemiologist at George Mason University, in an email. “These are also good examples of how effective the vaccines have been and our ability to rapidly respond to spikes and novel variants.”

So both the shape and the size of an infection spike can be altered with public health tactics. Over time, as immunity builds up in the population, experts expect to stop seeing tall, sharp spikes in Covid-19 cases. The virus probably won’t go away entirely, but case counts could form seasonal waves as new variants arise, immunity wanes, and exposure opportunities increase, according to Mokdad.

Covid-19 cases spurred by omicron appear to have peaked already in the US, but the health care system is still facing a stressful time ahead.

When an outbreak peaks in a given community, “50 percent of the infections have occurred and now another 50 will happen as we come down,” Mokdad said. “So we still have a couple of weeks ahead of us that are dangerous in the United States. … A small fraction of them are going to the hospitals, but a small fraction of a huge number is a lot.”

If public health measures like masking and social distancing are relaxed too soon, cases can bounce back up on their way down. The UK, for instance, reopened schools and relaxed Covid-19 rules before the omicron wave flattened out. Then infections stopped dropping.

The same thing could happen to other countries. “That sharp decline will slow down at one point, then it goes back [down] sharply again,” Mokdad said. “That’s what we are noticing globally.”

Even after the omicron wave recedes, the US will still have to contend with people who remain unvaccinated against Covid-19, both inside the country and around the world. And the virus is always changing: Omicron now has a subvariant called BA.2 that is gaining some ground, though it’s not yet clear what it means for the pandemic overall.

The more the virus spreads, the more likely it is to mutate in dangerous ways. As the current variants have shown, they can quickly spread around the world, regardless of where they originate.

The recurring spikes of Covid-19 cases, fueled in part by variants, should inspire us to redouble our efforts at controlling the disease, especially with vaccines. “We’re still struggling to avoid these peaks as vigilant infection prevention efforts and global vaccine equity have been a challenge,” said Popescu.

A more robust global vaccination effort, coupled with better disease surveillance to catch variants before they spell trouble, could prevent the next wave and finally start to bring the pandemic under control.