The simplest, most revolutionary approach to ending poverty 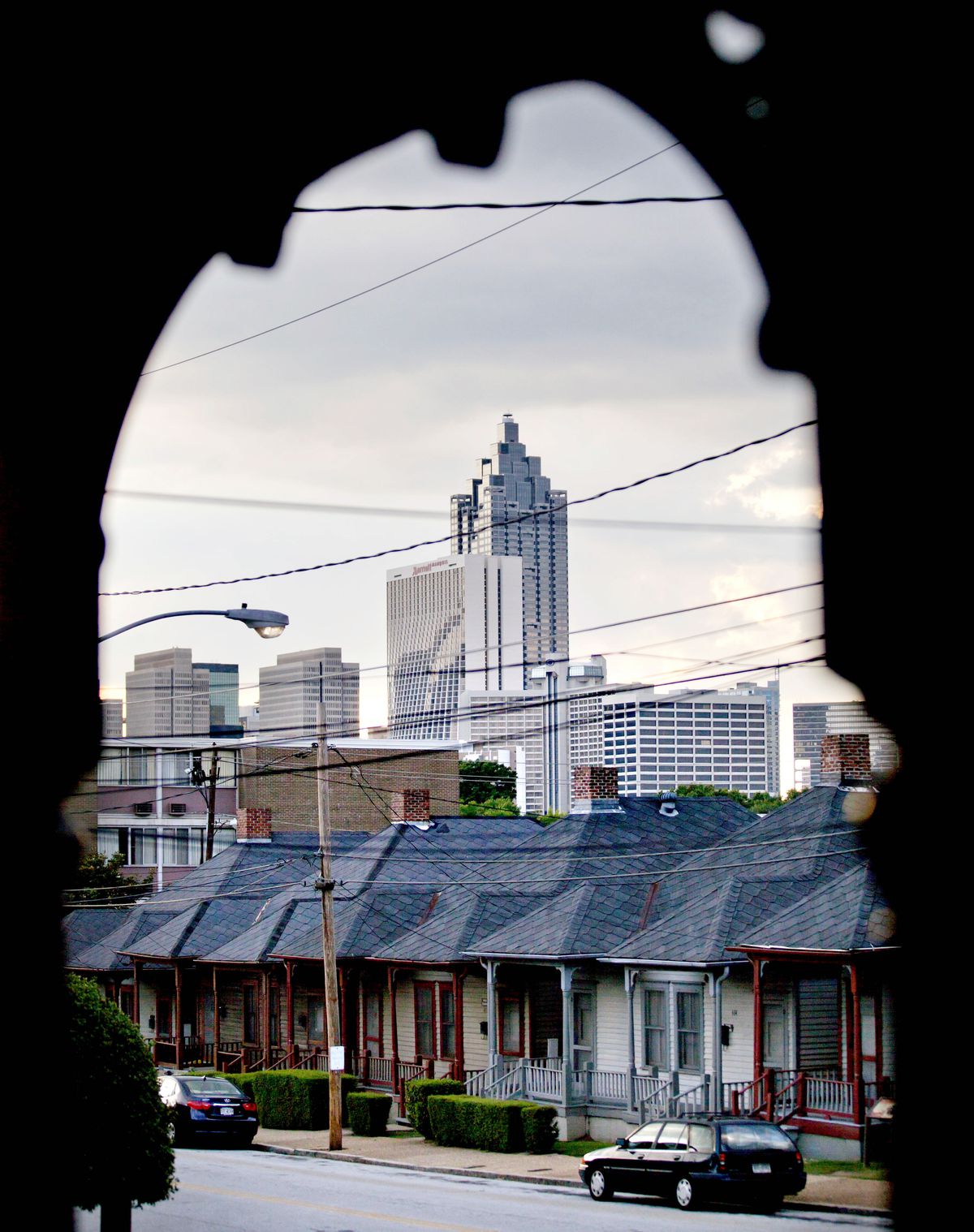 In the last years of his life, frustrated by the failure of the civil rights movement to change the day-to-day financial circumstances of Black Americans, Martin Luther King Jr. turned much of his focus to questions of economic justice, and increasingly landed on one possible option. In 1966 testimony in front of the US Senate, King declared, “I am now convinced that the simplest approach will prove to be the most revolutionary — the guaranteed annual income.”

More than 55 years later, King’s dream of a guaranteed income is about to get a test in his home neighborhood: Atlanta’s Old Fourth Ward. Later this month, the Georgia Resilience and Opportunity Fund (GRO), a community racial justice organization, and the nonprofit GiveDirectly will be launching the largest guaranteed income program so far tried in the American South. They’ll be sending out cash transfers averaging $850 per month to hundreds of women in predominantly Black neighborhoods throughout Georgia over the next two years. Starting in the Old Fourth Ward, the program will expand to other urban, rural, and suburban areas in the state, ultimately providing aid to about 650 women in all.

While direct cash giving programs have proliferated in the US and the rest of the world in recent years, the Georgia program stands apart in its intended targets and its ultimate aims. Income and wealth gaps by race and gender are persistently wide in the US — more than 25 percent of Black women live under the federal poverty line, compared to about 20 percent of Black men, 12 percent of white women, and 9 percent of white men. According to a 2019 Federal Reserve survey, the median Black household holds less than 15 percent of the wealth of the median white household.

The GRO Fund and GiveDirectly program is meant to center groups that have been pushed to the economic margins. But just as importantly, it can demonstrate that direct cash giving can help create a just system that works for everyone, said Hope Wollensack, executive director of the GRO Fund. “If the economy can work for Black women — who have faced some of the highest income gaps, are most likely to live in poverty, most likely to get stuck in poverty — if we can start and develop policies among those who are facing some of the most acute impacts, then we are developing policies that will work for everyone,” she told me.

As King understood decades ago, guaranteed income can change lives. But the way that the organizers of the Georgia program are targeting their plan — predominantly if not solely for Black women — raises questions about the political trade-offs of framing and targeting cash transfer programs as an issue not just of economic justice, but racial justice as well. Those questions have relevance for progressive priorities that go beyond guaranteed income.

What’s being tried in Georgia is not a universal basic income program, which provides steady, unconditional income over the course of years to everyone in a targeted area, like GiveDirectly’s work in Kenya. Rather, it’s a guaranteed income experiment of the sort that is growing around the world, and which have been connected to positive effects on employment, mental health, housing, and more. Unlike UBI, guaranteed income is more narrowly focused to temporarily help demographic groups that are more likely to experience poverty. The amount of money going to each recipient will often be too small to pay for all of someone’s basic needs — though potentially still big enough to be a life-changing amount.

The GRO/GiveDirectly program will study what recipients use the money on, and the effects of the program on their mental and psychological well-being. “We wanted to listen to the voices of recipients,” said Miriam Laker-Oketta, GiveDirectly’s research director. “We’re looking at multiple areas where we believe that cash should be able to have an impact, but we’re listening to stories of the recipients instead of just numbers.” (Since program recipients are not randomly assigned to a treatment and control group, the researchers won’t try to make causal claims for the program.)

A key aim of the program is to explore the difference between providing much of the cash up front in a lump sum versus parceling out payments over time. Half the women will receive $4,300 up front and $700 for the remaining months — 24 in all — while the others will receive $850 each month. The total payments will be the same for both groups: $20,400.

Another difference from other income experiments is exactly who the program is looking to target. While recipients might not exclusively be Black women, it’s being explicitly framed by the organizers as “a guaranteed income initiative focused on Black women across the state of Georgia,” and will take place in neighborhoods with large Black American populations.

The impetus for designing the program this way is clear: There are deep wealth and income inequalities around race and gender that persist in the US, Georgia, and the Old Fourth Ward.

This is a divide centuries in the making, going back to slavery, through Jim Crow and GI Bill-era exclusion from education and housing benefits, to mass incarceration in the present day. The fact that Black Americans have been consistently paid less throughout America’s history — and nothing through much of it — has compounded over time to account for most of the wealth gap we see today, researchers at the Cleveland Fed found.

While guaranteed income alone won’t be a magic fix to the historical injustices around race in the US, cash transfers that reduce contemporary income gaps can begin to make a dent in racial wealth inequalities. To think about it another way, if cash transfers had been given to low-income families in 1960, it would’ve lessened the racial income gap back then, which in turn would have compounded into a smaller racial wealth gap today. We didn’t do that in 1960, but we can start today.

The Georgia program is different from GiveDirectly’s other programs in that it’s the first to use racial justice as a framing strategy and as part of its targeting. For many activists working on narrowing the racial wealth gap through anti-poverty programs, racial justice is at the moral center of their goals, and to downplay this would be to draw attention away from the point of the programs. But historically it’s been easier to garner support for plans that emphasize the economic benefits of poverty reduction.

Racially targeted programs such as affirmative action and reparations tend to be unpopular. Opposition to these programs is largely driven by white Americans; they tend to be far more popular, if not universally, among Black Americans and other Americans of color. As of 2016, far more Americans, including Black Americans, supported progressive anti-poverty programs such as a public option for health care and raising taxes on the rich. That segment of the population also holds more conservative views on racial justice than people who do not support progressive economic programs but have progressive views on race.

Still, researchers at the University of Illinois have found that, since 2016, a “more structural understanding of racial inequality” has intensified among Black Americans and also has grown among white Americans, meaning it’s plausible that race-based framing of programs has gained some popularity in the years since, marked as they were by the Trump presidency, the Black Lives Matter movement, Covid-19, increased support for cash transfers in general, and increased progressive framing of programs around race.

The fact that race-based framing is still less popular than economic framing — even if the approach has gained some ground — raises the question for activists working on guaranteed income: Should racial equity be central to their framing?

Any program that effectively addresses poverty in the United States will disproportionately benefit Black Americans because poverty in the United States disproportionately affects Black Americans. That’s part of the case for tackling poverty: Among all its other benefits, it will reduce some of the financial harm done by a history of racial discrimination in America.

It’s not necessarily an either-or. Ivuoma N. Onyeador, a psychologist at Northwestern University, warned against changing programs to address these gaps out of fear of backlash because the gaps are real. She discussed the importance of universal framings to build empathy with all people living in poverty: “It’s hard to lift yourself out of poverty when you don’t have food for your children.” These can be combined or complemented with framings that explicitly note how racial wealth disparities tend to be underestimated, along with appeals aimed to change views over time, such as deep canvassing — long conversations to develop empathy between people with different views and convince people on policy issues in the long-term.

The Georgia program is privately funded, but as guaranteed income grows into public policy, future, larger programs will have to handle the politics of framing such programs in a democracy. And the choices they make may be consequential. The reality is that while racial justice is a major moral goal of guaranteed income for many working on the issue, a racial justice framing may sacrifice possible popular support, which in turn may make a socioeconomic argument more persuasive and more politically sustainable. But a popularist approach can require its own assumptions about which groups to prioritize, and may also underestimate the extent to which voters’ minds can change.

Few Americans did more to change the minds of their fellow citizens than Martin Luther King. Civil rights were not a popular cause in his time, yet he persisted not merely by appealing to popularity, but to concepts of justice — and in doing so, changed the nature of America.

Guaranteed income has gained attention only in recent years. It’s possible that different framings around guaranteed income can work in different contexts, or can work in conjunction with instead of in opposition. Given how different poverty is for Black and white Americans, if guaranteed income is to take off as King envisioned and work for everyone in society, it can’t avoid grappling with the hard problem of racial inequality.