‘The Tragedy of Macbeth’ dazzles with Denzel Washington and Frances McDormand In retrospect, it seems inevitable that William Shakespeare’s Macbeth would get a Coen Bros’ adaptation. The centuries’ old drama centers on an anti-hero well-suited to their repertoire of charismatic scoundrels: a seemingly good man is put in a curious spot and so behaves very, very badly to attain his desire. Along the way, there will be strong women, quirky characters, deception, murder, and plenty of style. But The Tragedy of Macbeth is distinctly different than its predecessors, and not just because it’s Joel Coen helming without his brother for the first time. Here, there’s something slippery and more surreal, which makes the pull of Macbeth’s descent feel doomed yet weirdly rapturous.

Adapted and directed by Joel Coen, The Tragedy of Macbeth trims the lengthy stage production into a lean and mean movie of just one hour and forty-five minutes. Its center of gravity is two powerful performances: Denzel Washington as a steely Macbeth and Frances McDormand as his wickedly practical wife, Lady Macbeth (reprising a role she played five years back in a  Berkeley Repertory Theatre production). These accomplished performers swiftly manifest not just a compelling chemistry, but also an easy intimacy that speaks to the Macbeths’ decades of deep marital bonds. So, when Macbeth comes home with witches’ predictions and an unexpected promotion, his lady swiftly slides into scheming. A plot to kill the king and snatch his crown is formed easier than deciding on dinner plans.

From the film’s first frames, Coen leans into slippery surrealness, which urges audiences to follow the emotional flow of the film rather than search for reason. Influenced by German Expressionism, Coen’s settings are stark and cold, places of towering stone walls, vast emptiness, sand, and fog. They feel like the settings of a dream, hazy yet just distinct enough for the dreamer to presume a location. Mood is most important. With everything cast in mid-tone grays of black-and-white photography, the mood is foreboding.

Onto this “stage,” scuttles a strange creature, who gurgles and croaks the familiar incantations of the three Weïrd Sisters. Kathryn Hunter pulls triple duty, shouldering all these roles (and one more later), then turning their performance into an intensely physical one. Her witch is a contortionist, whose toes snatch like fingers, whose limbs bend in impossible arcs, and who can then stand tall and bold as she prophesizes glory and doom. She is such a striking figure that it’s easy to see why Macbeth would be beguiled by her predictions, perhaps even if they didn’t so heartily feed his ego. 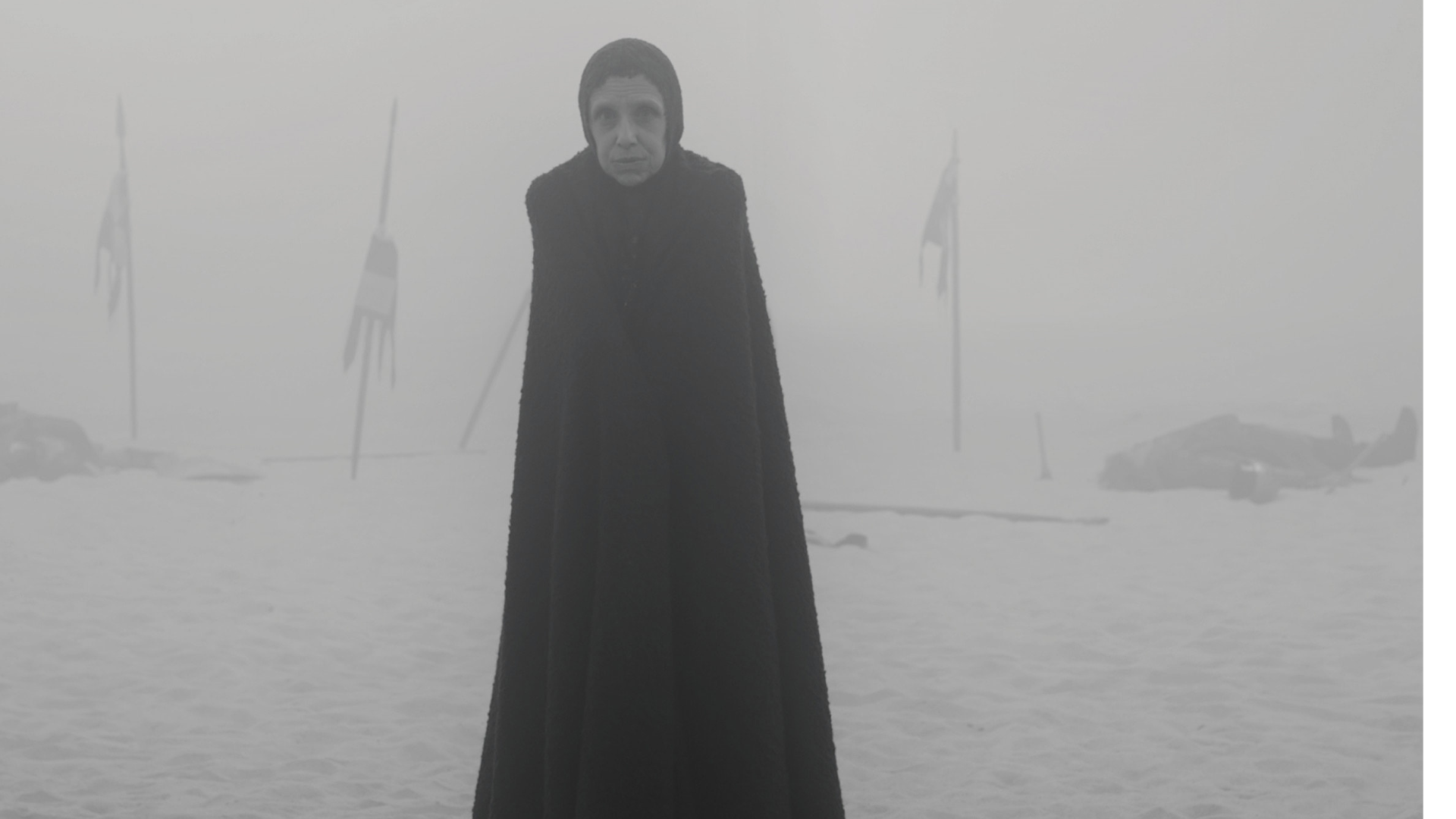 Other performances likewise have the feel of theater, not in being over the top, but in being fearlessly sharp. In a brief but engaging scene, Moses Ingram plays a lady, who tries to make sense of this cruel world before her young son. Her tone, heart-strong yet haunted, is so steadily intense, that there’s some sense even the cheap seats would get their money’s worth on her watch. Meanwhile, Alex Hassell plays a duplicitous strategist, whose poses, preening, and textured costume altogether read as a slithering snake made man. And scene-stealer Stephen Root pops up to play the fool and throw in a playful pratfall.

These touches — along with immersive visions of whispers and rising tides  — blur the line between theater and film presentation, urging the audience to a suspension of disbelief that’s close to the former. “You know this story,” Joel seems to shrug with his speed and surrealness, “So let’s have some fun with it.”

Director of photography Bruno Delbonnel masterfully paints with shadow to bring drama and depth. Stark shadows paint silhouettes that scream of a point of no return – there is no gray here, only black and white. But in less high contrast scenes, the sharp focus of his camera captures not only every expression but also cracked lips, coarse beards, crusted cloth. The hardness of the world and how it wears on man is made evident in many close-ups. But more than this, so is the age of its central lovers. There’s often a misconception that ambition is a game for the young. If that were true, we wouldn’t repeatedly be picking between 70-somethings for the presidency. Here, the age of Macbeth and Lady Macbeth is clear as the wrinkles on their faces, and the grey hairs speckled throughout his thick beard. While other ladies have children doting on them and bopping about their homes, Lady Macbeth’s house is as quiet as the grave. As will become a bitter refrain later, they have no children to carry on their legacy. All they have is this moment. With Shakespeare’s iconic speeches, Washington and McDormand give graceful gravitas to the ravenous appetite of the lovers’ shared ambition. But with this gorgeously shot film, every line on their brows and cheeks underlines the urgency of their quest. Tomorrow is less and less certain. Now is the time for the taking, come hell or haunted dreams of damned spots of blood that won’t come out.

All told, The Tragedy of Macbeth is a sophisticatedly lean yet rich rendition of the Shakespeare classic. Joel Coen mixes a snarling mood with a sensational cast, who brings the words to life with performances nuanced and unnerving. The artistry in costume, production design, and cinematography is deceptively reserved. Yet they urge us to look closer at the tiny details writ large on the screen. Behold how every fold and so-called flaw gives context and oomph to this tale of a good man turned murdering monster. Behold The Tragedy of Macbeth.

The Tragedy of Macbeth opens in select theaters on Dec. 25 and comes to Apple TV+ on Jan. 14.