The troubling link between electric cars and … flamingos? 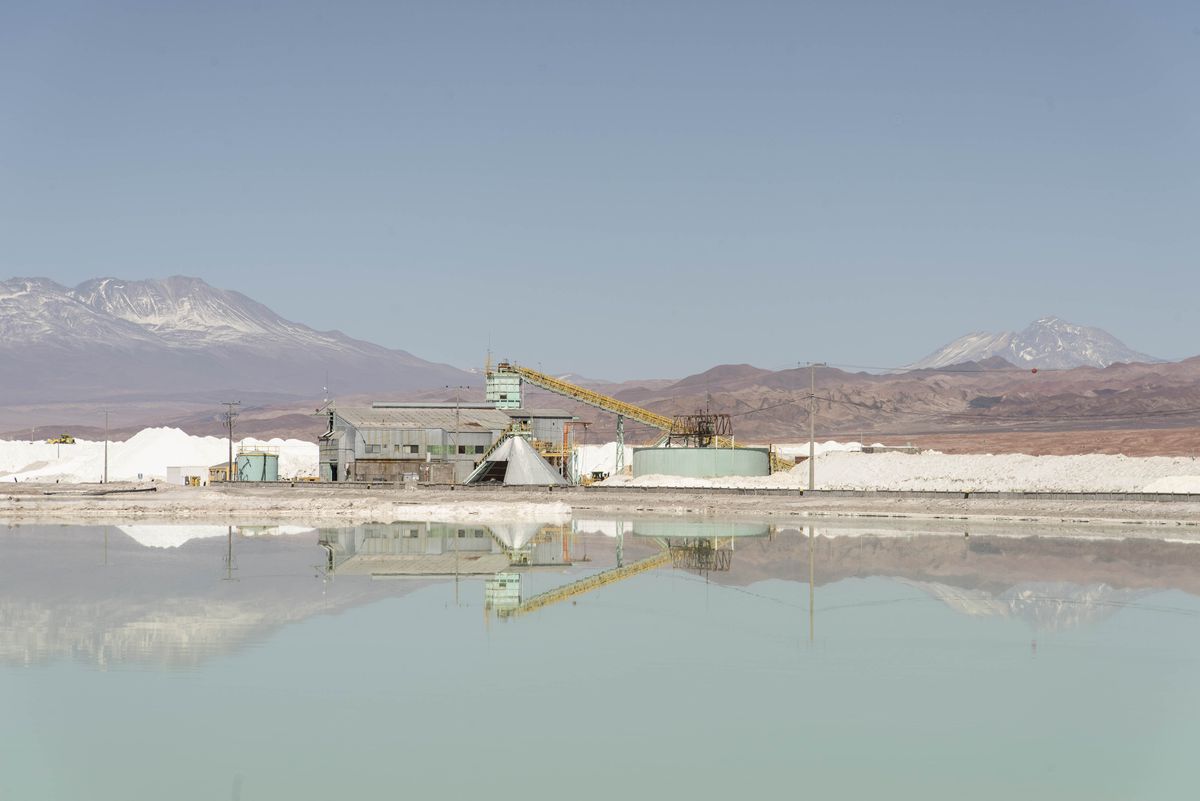 The Andean highlands of South America where Chile, Bolivia, and Argentina collide look a bit like the surface of Mars, with jagged rocks jutting out of a rust-colored terrain. Though it’s one of the driest places on Earth, the region is known for its saline lakes, which provide refuge to three of the world’s six species of flamingo.

It’s also known for something else: lithium. Abundant in the Earth’s crust and oceans, lithium is a miraculous element, used to treat bipolar disorder and generate energy in lithium-ion batteries, which power nearly all cellphones, laptops, and electric cars. Remarkably, this one region in South America — known as the Lithium Triangle — contains more than half of the world’s supply of it.

Demand for electric vehicles is growing exponentially, with companies selling more EVs in a week last year than they did in all of 2012. And that could put flamingos and other birds at risk, a new study suggests. Research published in the journal Proceedings of the Royal Society links lithium mining to the decline of two threatened flamingo species in a large lake basin in Chile. By using up groundwater, traditional lithium mining can turn lakes into hostile environments for aquatic organisms that flamingos eat, causing the birds to starve or flee, the authors wrote.

The study is among a small but growing number of reports that complicate the idea that electric vehicles and other battery technologies are unequivocally good for the planet. Electrifying cars and other vehicles is, no doubt, essential to curbing climate change — which, in itself, harms flamingos. But that doesn’t mean the lithium industry can’t find less disruptive ways to mine.

Lithium is commonly mined from rocks, but most of the world’s supply is in salty groundwater, called brine, much of which is found in South America’s Lithium Triangle. There, mining operations center around one lake basin in northeastern Chile, called Salar de Atacama, which is home to almost 30 percent of the world’s known lithium.

To extract lithium from brine, companies typically pump groundwater into shallow, colorful ponds, like those in the image below. Over several weeks, sun and wind evaporate much of the water and impurities, leaving behind a high concentration of lithium and other chemicals. Companies then process it into a commercial product that battery manufacturers can use to make lithium-ion cells.

The problem for flamingos and other shorebirds is that pumping and evaporating groundwater shrinks nearby desert lakes, where the birds eat and breed. Producing a single ton of lithium uses roughly 400,000 liters of water, according to the study, which helps explain why some saline lakes in the Triangle are at 600-year lows. In Salar de Atacama, more than 1,700 liters of lithium-rich brine are sucked out of the ground every second, by some estimates. Keep in mind that this is already one of the driest deserts on Earth.

As the lakes recede, they become saltier. And too much salt can kill off the aquatic organisms that flamingos eat, like brine shrimp and diatoms, a kind of algae. “Dramatic fluctuations in water lead to dramatic fluctuations of food,” said Nathan Senner, an assistant professor of biology at the University of South Carolina who co-authored the study. Without food, he said, the flamingos have fewer babies, fly elsewhere, or starve.

Flamingo populations in the Lithium Triangle vary drastically from year to year, along with the amount of water and food, the study found. And at least in some places, mining seems to be contributing to those swings.

In Salar de Atacama, the populations of two threatened flamingo species — Andean flamingos and James’ flamingos — declined by 12 percent and 10 percent, respectively, between 2002 and 2013 (the most recent years for which the researchers had strong data). The analysis shows that those declines are most tightly linked to the spread of lithium mining, which the researchers measured using satellite imagery.

As expected, the authors also linked a drop in lake water — which is likely also linked to mining — to the decline of flamingos. Over the same 11 years, the surface area of water in the salt flat fell by more than 40 percent in winter, according to the study (the researchers didn’t detect a trend during the summer months). Noise and vehicle traffic from the mining operations are also likely impacting the birds, the authors wrote.

Flamingos aren’t just pretty to look at; they’re also linchpins in brine lake ecosystems, Senner said. As grazers, they spend much of their time munching through tiny organisms near the bottom of the food chain, which helps keep the lake’s ecosystem in balance. They’re also a barometer of lake health. If flamingos can’t survive, it’s likely that other avian species — such as ducks and coots — can’t either.

Many people who live in the region also depend on the birds for tourism, said Datu Buyung Agusdinata, an assistant professor at Arizona State University who was not affiliated with the study. “When the flamingo is gone, you will have fewer tourists, and this could impact livelihoods in a deep way,” he told Vox.

But the researchers also discovered some good news: Across a much broader region, which includes the entire Chilean portion of the Lithium Triangle, none of the three flamingo species have declined. So, while mining might imperil birds in Salar de Atacama, other lakes can still support flamingos and perhaps even buffer losses elsewhere, according to the study. (In Salar de Atacama, flamingos didn’t necessarily die; they may have just flown to another lake or had fewer babies from one year to the next due to a lack of food.)

That means scientists and engineers have a rare opportunity to limit the impact of mining on these iconic birds before it’s too late.

In the last two decades, lithium production has grown eightfold in the Lithium Triangle — and there’s no question that it will continue to boom. Nearly all 20 of the world’s largest car manufacturers have committed to selling more electric vehicles, and the markets for home backup batteries and other electronics are also growing. “Chile, Bolivia, and Argentina are all pushing to expand lithium mining operations,” Senner said.

That’s one reason why studies like this are “urgently needed,” said Gonzalo Gajardo, a researcher at the Universidad de Los Lagos, Osorno, in Chile, who was also not affiliated with the study. While these results only show correlations — they don’t prove that lithium mining causes flamingos to decline — they’re still helpful, he said. “We need to devote more science to understanding how the shrinking of salty lakes affects their biodiversity,” he said.

Researchers are also calling on companies to develop more sustainable mining practices. Lilac Solutions, a startup backed by BMW and a fund led by Bill Gates, says it has developed a technology that extracts lithium from brines without using evaporation ponds. The firm sells beads that mining companies can toss into tanks of brine, where they absorb lithium. “Lithium can be produced cleanly,” David Snydacker, the firm’s CEO, said in an interview with S&P Global Market Intelligence last fall.

Recycling can help reduce the demand for lithium, too, though it still has a long way to go. Only about 5 percent of lithium-ion cells are recycled today. “There are a lot of hurdles,” Agusdinata said. Recycling batteries can be dangerous, for example, and cells tend to degrade over time. By 2030, recycling is likely to supply less than 6 percent of the global demand for lithium, he said.

Chile, which controls roughly half of the world’s lithium reserves, is now rewriting its constitution, and study co-author Cristina Dorador Ortiz, a microbiologist, is on the writing committee. One way to strengthen the constitution, she told Vox, is to consider ecological impacts before granting companies the right to mine. “It’s impossible to stop mining,” Dorador Ortiz said. “But we need to do it better.”

August 16, 2022We have now launched a new Access to HE course in Public Services to add to our growing portfolio of online courses...
Read more

August 19, 2022We are celebrating our 15th anniversary following a rewarding year which has seen us reach our 110,000 student milestone, turnover increase from...
Read more

August 16, 2022We have now launched a new Access to HE course in Public Services to add to our growing portfolio of online courses...
Read more
Open Courses

August 19, 2022We are celebrating our 15th anniversary following a rewarding year which has seen us reach our 110,000 student milestone, turnover increase from...
Read more
E-Learning