The US and allies start punishing Russia for its Ukraine aggression 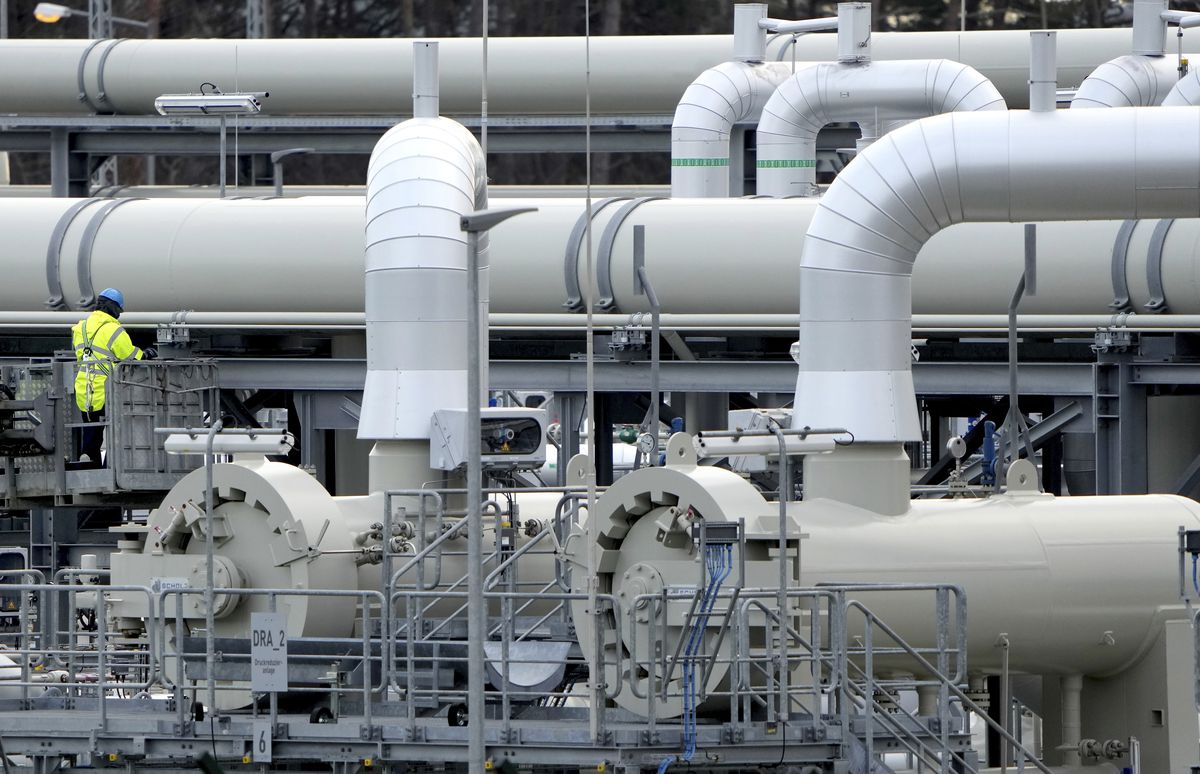 The United States and other Western countries have started to impose sanctions on Russia for its moves into eastern Ukraine.

The sanctions so far are forceful signals that target certain financial institutions and individuals — but they are not yet the most severe sanctions the West has the capability to impose.

President Joe Biden on Tuesday announced what he called the “first tranche” of sanctions, which will include full blocking sanctions on two Russian financial institutions and penalties on Russian sovereign debt, designed to cut Russia off from foreign financing. Biden said sanctions on Russian elites and their families would follow.

The United States’ measures come after Europe and the United Kingdom also imposed sanctions on Russia, including asset freezes and travel bans for certain Russian oligarchs and politicians. Germany also paused certification for the $11 billion Nord Stream 2 pipeline, something the US and many of its partners very much wanted. (The US a day earlier placed targeted sanctions on those doing business in the breakaway regions in eastern Ukraine where Russia was moving in.)

This flurry of diplomatic action came after tensions on Ukraine’s border rapidly escalated this weekend, and on Monday, Russian President Vladimir Putin moved to recognize as independent the so-called Luhansk People’s Republic and the Donetsk People’s Republic, two territories in eastern Ukraine where he has manufactured a separatist conflict since 2014. Shortly after, Putin ordered troops into the region for “peacekeeping” operations. European officials said Tuesday that Russian troops have since arrived in these breakaway regions.

The United States and some of its partners appeared to vacillate on what, exactly, to call Russia’s actions in the immediate aftermath. This was not the march toward Kyiv that US officials had warned about. But it was a violation of international law and Ukraine’s sovereignty, an attempt by Russia to essentially redraw Ukraine’s borders.

The diplomatic language matters, as the US and its allies have promised Russia will face “swift and severe costs” if Putin decides to invade Ukraine. And Russia’s latest acts look like the beginning, not the end of this conflict. Biden warned Tuesday that Russia is “poised to go much further in launching a massive military attack in Ukraine.”

The West faces a real dilemma here. The US and its allies are trying to avoid executing the most punishing sanctions just yet, so they have options if, or when, Putin escalates — and there are few signs that Russia is deescalating in eastern Ukraine. Some have called for the harshest sanctions now, essentially arguing that failing to harshly punish Putin now won’t deter him at all, a repeat of what happened in 2014. But the West also risks exhausting its harshest tools, leaving nothing left if Russian mounts a greater attack.

The US, in combination with the efforts of European allies, are showing that they’re willing to punish Russia, but these packages are not yet at the level of the “mother of all sanctions.” Whether that happens will depend on what Russia does in the coming hours and days, whether sanctions will be enough to stop Putin at all, and the costs the US and Europe are willing to risk giving up.

“I think what you’re going to see is that Russia will be held accountable if it invades,” President Biden said in January. “And it depends on what it does. It’s one thing if it’s a minor incursion and then we end up having a fight about what to do and not do.”

Biden received a lot of flak for that comment, but in the end it proved prescient: The US and its allies are trying to figure out how to calibrate for Russia’s declaration of independence and order of troops into eastern Ukraine — a violation of international law and Ukraine’s sovereignty, but something Moscow didn’t need the approximately 190,000 troops it has gathered on Ukraine’s borders to do.

The United States and its allies have ruled out sending troops to defend Ukraine. The West is relying on other foreign policy tools, including defensive support to Kyiv and shoring up the US presence in NATO’s eastern flank, which Biden said Tuesday the US would continue to do. And the next step is sanctions.

Sanctions have, at best, a mixed track record. The US has applied aggressive economic blockades on countries like Cuba, but they have not necessarily generated the policy and regime change the US has sought, while also squeezing average citizens.

For sanctions to really work — like the coordinated sanctions that brought Iran to the negotiating table for the original Iran nuclear deal in 2015 — wide international participation is critical. But it’s unclear how collective the global response — specifically, from China — will be to Russia’s moves into Ukraine.

The question of how to punish Russia also comes with another difficult dilemma: specifically, what costs are the United States and its allies willing to bear.

The most aggressive sanctions, like making it extraordinarily difficult for Russian financial institutions and state-owned banks to trade in US dollars, could inflict a lot of hurt on Russia — and, very likely, its people — if the sanctions sparked inflation or other economic crises. Other dramatic options exist, like blocking Russia’s biggest exports, oil and gas.

But the more far-reaching and destructive the action against the Kremlin, the more potent the potential reverberations in the West. The most severe sanctions, like cutting off Russia from all or parts of the global financial system, may hurt other economies intertwined with it. The US and Europe are not exempt, especially as these economies are dealing with the post-pandemic recovery and inflation. Russia may take retaliatory measures, too.

These calculations are not new. The United States and its allies made similar ones in 2014, after Russia annexed Crimea and invaded eastern Ukraine. Russia has also taken steps to insulate its economy since those sanctions in 2014, making it at least better able to withstand some pressure from the West.

Moscow is also very likely to engage in its own countermeasures, in defense of what it sees as a justified action in Ukraine — which Putin has already said he doesn’t see as a sovereign country. Russia also has the ability to create chaos in other ways, launching cyber operations or disinformation campaigns on Western targets. It could threaten to cut off the Russian energy supply to Europe.

The US and its partners have tried to counter these risks, for example, trying to get countries like Qatar to make up some of Europe’s energy supply. It’s a sign that Western allies realize any measures against Russia come with risks, though they may see no choice but to take them.

The US and its allies have a handful of options to punish Russia, some more punishing than others.

So far, Biden has announced “full blocking” sanctions on two Russian financial institutions, VEB and a military bank, along with sanctions on Russian debt. Biden said the actions mean Russia’s government “can no longer raise money from the West and cannot trade in its new debt on our markets or European markets either.”

The measures are largely a warning shot. These institutions are not Russia’s largest banks, which means the effect on the larger economy will be limited. Russia has decreased the amount of debt held by foreigners, as part of its efforts to insulate its economy after 2014 sanctions.

Europe has also imposed sanctions on individuals involved in Putin’s decision to declare independence in the two regions in eastern Ukraine, and has put targeted sanctions on Russian banks helping to finance military operations in the Donbas. The EU said it had limited Russia’s access to European financing that might be used to facilitate military activities, and restricted trade with anyone in the two breakaway regions. The UK sanctioned a few oligarchs, and put limited sanctions on some banks.

Perhaps Europe’s biggest penalty came in the halt of Nord Stream 2 development, which was really Germany’s decision to make. No gas was flowing through the pipeline, but the US and its allies have warned that the project could become another tool for Russia to manipulate Europe’s national and energy security.

Europe’s reliance on natural gas from Russia is hanging over many of these sanctions decisions. German Chancellor Olaf Scholz, in announcing the freeze on Nord Stream 2, noted that the country needs to examine the security of its energy supply. Europe is reliant on Russia for about a third of its natural gas, and with fuel prices spiking and the continent already feeling an energy crunch (which some believe Russia has been happy to let happen), it is wary of even greater disruptions. Conflict could deepen this crisis. So could Russian retaliation if Moscow messes with gas supplies — something it hinted at Tuesday.

The US has also said it will target oligarchs and their family members, but so far it’s a limited number of individuals. The goal here is to put pressure on powerful people close to Putin, but experts said this can sometimes backfire, making oligarchs even more dependent on the regime and Putin’s largesse.

As Biden and some of his Western counterparts made clear, this is likely the first round of penalties. The US and the EU presented a fairly united front, a sign that they’re not fracturing under Putin’s pressure. But if harsher sanctions are to come, the risks increase for the West. And they come without any real guarantees any action will deter Putin.