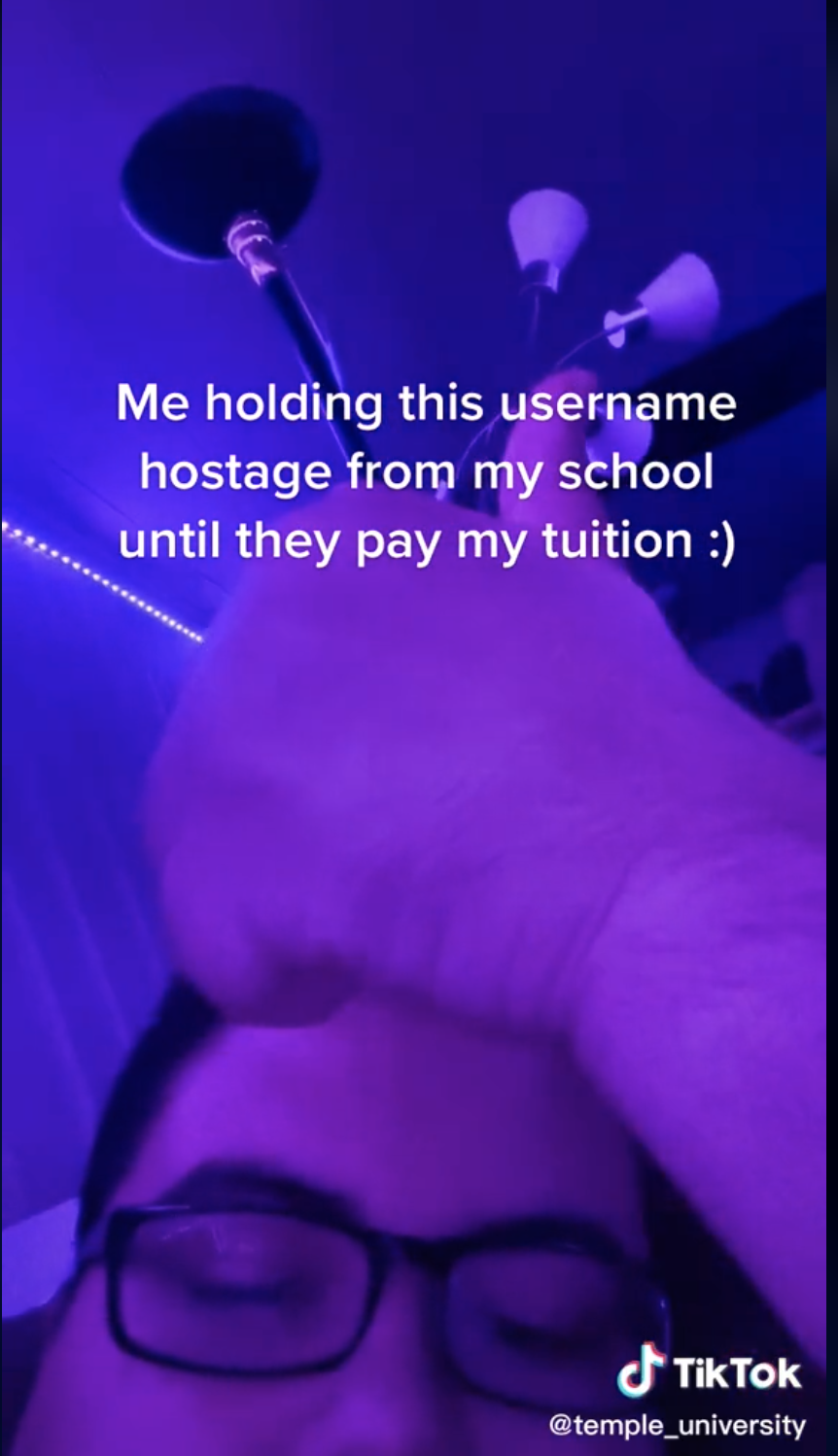 Colleges better step up their social media game — or they risk students taking them over.

Federal student loan borrowers don’t have to make payments until January 2022, thanks to COVID-19 emergency relief funds and an extension from the Biden administration. But they’re still going to have to make those payments, despite a massive movement to end the repayments that have left more than 40 million Americans in debt. But some people are getting creative.

One user is harnessing the power of TikTok to try to get his debts cleared. Under the username @temple_university, he posted a video of himself with the music “So this is Christmas” and text that reads: “me holding this username hostage from my school until they pay my tuition :)” The caption read: “Your move Temple #templeuniversity #temple #college #vibin.”

I endorse, give him his money
Credit: TikTok/ @temple_university

Another user snatched up the username @brighamyounguniversity and posted a video on Oct. 6 saying “When you get the username of your college before they can.” The video garnered nearly 2 million views, and the following day they posted another video that read “accidentally got on the news and now BYU wants my username.” The audio behind the second video says “Listen, I can’t give any more information. But I fear I may have girl bossed a bit too close to the sun.”

Later that day, the user posted another video under a new username: @pleassedontdeleteme. 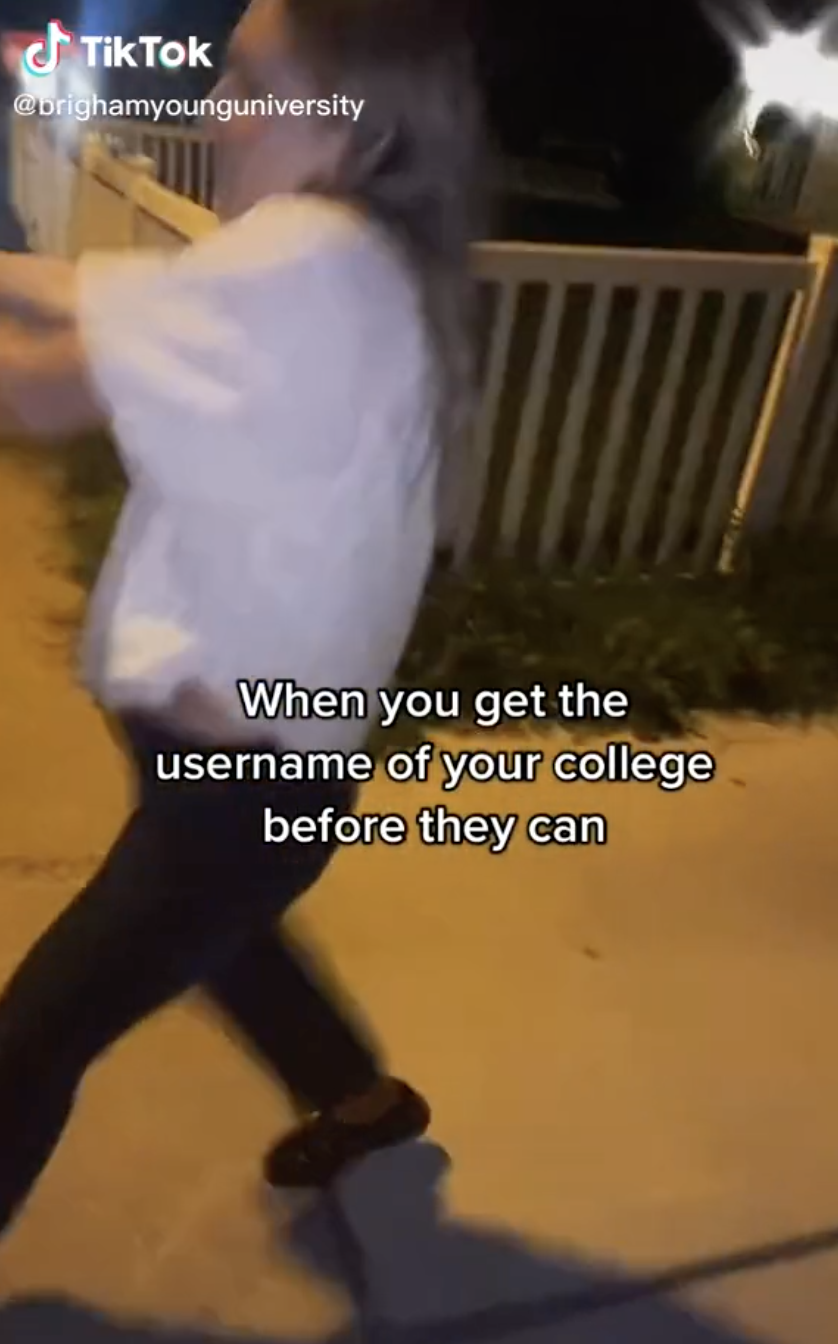 “Hey guys, so I did change my username because I’m scared of TikTok and the power that they have over deleting my account. I was told that BYU reported me to TikTok so that’s kinda fun — future resume builder, honestly,” the user said in a video of her doing her makeup. “But I feel like they could have a cool opportunity to reach out to me and kind of make it a little moment for them, something funny. Did Ii make a second account with the same username? Maybe I did, I don’t know. But wouldn’t it be cool if I got a picture with President Worthen, the president of BYU, and I’m like shaking his hand and handing over a sign that says the TikTok username? I feel like it could actually kind of be funny. So who’s with me on that little idea?”

The new @brighamyounguniversity account has no videos but the bio leads you to, you guessed it, @pleasedontdeleteme.

It’s part of a larger trend on TikTok in which users are saving usernames of their schools, governors, cities, or other institutions and joking that they won’t give the usernames up unless it hands over a ransom — like tuition payment or free rent.

A user with the name @discover_rhode_island commented that they aren’t “paying for taxes this year,” and @uncobears said they are “gone get that bag.” A fake Rudy Giuliani account, @rudygiulianiofficiaal, said they also wanted to get some good ransom money but fear the real Giuliani is “too broke.”

There’s the @officialjoerogan TikTok account that’s not asking for anything, but is, hopefully, annoying Joe Rogan, which I would consider a victory akin to eliminating student debt. The account @burlingtoncoatfactory doesn’t appear to be fighting for anything specific, or @officiaalandybeshear, the pretend governor of Kentucky; @officiaalbilllee, of Tennessee governor fame.

There’s probably nothing stopping TikTok from taking over someone’s account and handing it over to the institution, but there’s no real reason to do it, either. These accounts aren’t verified, and they’re clearly parodies.

TikTok did not immediately respond to a request for comment from Mashable.

People likely won’t be making millions of dollars off of holding accounts hostage, but it sure is fun to watch.