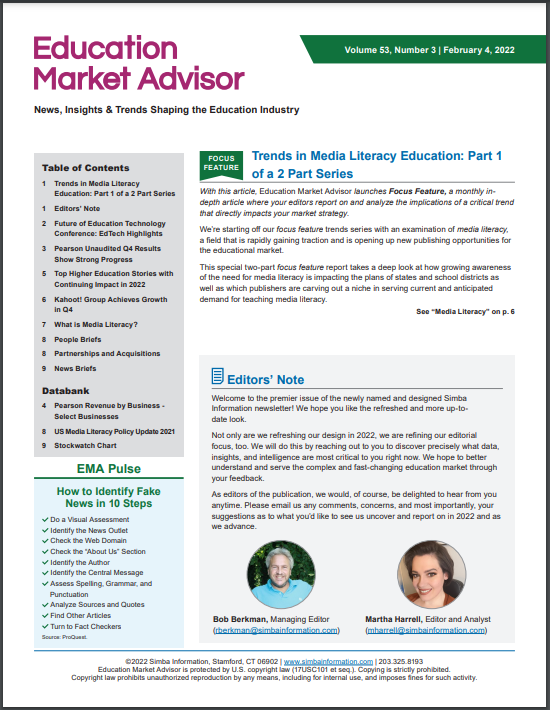 Media literacy is a field that is rapidly gaining traction and is opening up new publishing opportunities for the educational market.

Here’s a look at why interest in teaching media literacy is rising and what leading states are doing in response.

Interest in media literacy instruction is increasing quickly among a wide range of educational planning stakeholders, including state legislators, school districts, school planning committees, advisory councils, and teachers themselves. Why is this happening now?

Erin McNeill, Executive Director of the Watertown MA based advocacy group Media Literacy Now told Education Market Advisor that: “We’re seeing a lot of momentum now with media literacy as we are all seeing the consequences of consuming mis- and disinformation.” She added that “lawmakers are recognizing that it is their job to set educational priorities for young people in their states and that media literacy is not ‘just one more thing’ but is essential today, and so lawmakers need to find a way to provide resources.”

The recognition of the importance of media literacy is nothing new – in fact UNESCO established media literacy as a global initiative back in the late 1970s. But today there is an increasingly urgent recognition that young people must be better prepared to distinguish fact from opinion, to identify credible information from misinformation, and to avoid getting triggered by malevolent content online. Forces driving this heightened concern include:

All of these forces have created a new imperative within the education community: how can media literacy be effectively taught to students so they can be “inoculated” from misinformation, disinformation, and pernicious online information?

As mentioned above, new forces are creating momentum to accelerate media literacy instruction, but the United States has been a laggard in this field. Countries that are leaders and either require media literacy in their school’s curriculum, or made other inroads include Finland, Estonia, and Ukraine. In those countries, the ability to identify misinformation is considered a national security issue. Sweden and Norway are also leaders in media literacy. Canada, with a notable history in teaching media, is another country that for years has emphasized the importance of media literacy in the classroom.

Why is the US lagging behind in this initiative? Several barriers have impeded growth. Foremost among these are:

Illinois leads the list because, according to the Policy Update “it is the first state to require that media literacy is taught in the classroom.” Other notable state initiatives include those of:

What has been the response of educational instructional publishers to this movement? Routledge, for one, has been making particular inroads in addressing the need. In next month’s issue of Education Market Advisor, we will conclude this feature by examining Routledge’s strategy, what other publishers have been doing, identify leading textbooks, and address other larger implications for the industry, including the impact on testing.

This article is an excerpt from Simba Information’s biweekly newsletter Education Market Advisor, a pre-eminent source of business news and analysis for educational publishing and marketing for over 40 years.

Each issue is tightly packed with news and alerts to upcoming adoptions, mergers and acquisitions and tested success strategies for PreK-12 and college markets. Our publication is relied upon by top executives and decision makers at leading companies involved in the business of educational publishing.

About the Author: Robert Berkman is Managing Editor of Simba Information. Robert joined Simba Information in January 2022 from the University of Rochester (NY) where he served as the Business Librarian. He is the founder and editor of The Information Advisor’s Guide to Internet Research, and author of several books on effective research. Robert is a part-time faculty member at the School of Media Studies at The New School (New York, NY) where he teaches on emerging media technologies and on digital media ethics. He holds an MA in Journalism from the University of Montana.

Both the University of Notre Dame and John Gaski, an associate professor of marketing there, expressed regret last week that an article Gaski wrote...
Read more

Debt relief has public support, but will that be enough?

The political debate over whether President Biden should move to cancel some or all of the $1.7 trillion in student loan debt currently owed to...
Read more

Changing from college to university driven by image, prestige

Dominican College in Orangeburg, N.Y., was one of several colleges in the state working for the last several years to convince the state’s Board...
Read more

Both the University of Notre Dame and John Gaski, an associate professor of marketing there, expressed regret last week that an article Gaski wrote...
Read more
Education News

Debt relief has public support, but will that be enough?

The political debate over whether President Biden should move to cancel some or all of the $1.7 trillion in student loan debt currently owed to...
Read more
Education News

Changing from college to university driven by image, prestige

Dominican College in Orangeburg, N.Y., was one of several colleges in the state working for the last several years to convince the state’s Board...
Read more
Education News

Poland’s president has been accused of blocking the promotion of a researcher who explores the psychology of genocide.Michał Bilewicz, head of the Center for...
Read more