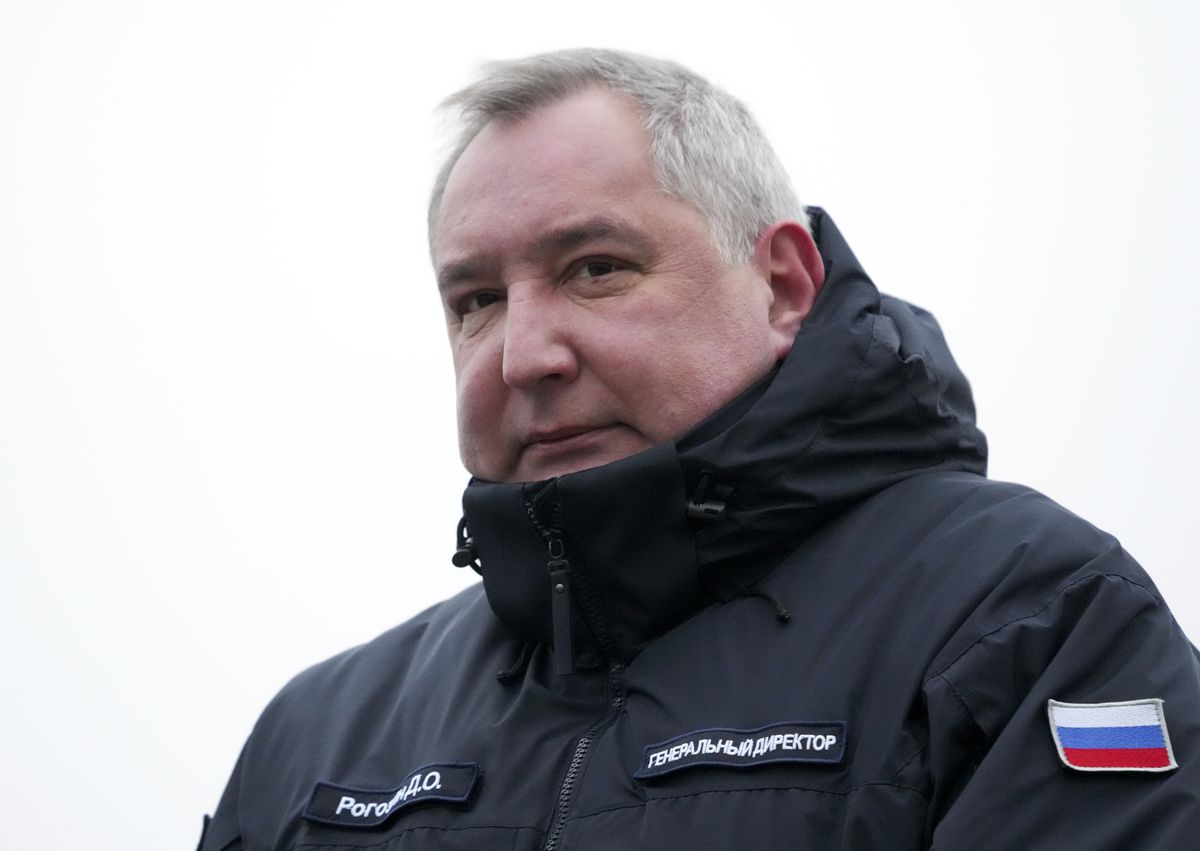 Following Russia’s invasion of Ukraine, tensions between the US and Russia are particularly strained here on Earth, prompting concerns that friction could inevitably spill over into the two countries’ longstanding partnership in space. For now, both NASA and Russia say they are still working together to keep the International Space Station operational, as they’ve done during past international turmoil.

Russia is, by and large, the United States’ biggest working partner in space. NASA and Russia’s state space corporation, Roscosmos, jointly operate the ISS, an orbiting laboratory that has become the primary space destination for astronauts hailing from America, Russia, and other nations across the globe. Roscosmos and NASA have been working together on the ISS for nearly three decades now, but the US-Russian partnership goes back even further than that. The two space organizations coordinated on Russia’s former Mir space station, swapped seats on NASA’s Space Shuttle and Russia’s Soyuz rocket, and even worked together during the Apollo era on the Apollo-Soyuz test project.

Since the space partnership has been a lengthy one, this is certainly not the first time that Russia and the US have clashed on the ground while continuing to work together in space. NASA and Roscosmos have continued to cooperate on the ISS during the 2014 invasion of Crimea and even after Russia blew up its own satellite, creating debris that threatened the ISS. Consistent communication between the two organizations is paramount for the safety of the ISS crew, even when tensions flare. “We’ve been able to keep it compartmentalized for so long,” Todd Harrison, director of the aerospace security project at the Center for Strategic and International Studies, tells The Verge. “And there’s a value to having that relationship between the US and Russia.”

However, there may be more options for NASA to distance itself from the Russian space corporation as the situation becomes more dire on the ground, especially since the dynamic between the organizations has significantly evolved in recent years. “It’s not really an option to just not be in contact about [the ISS],” Makena Young, an associate fellow with the Aerospace Security Project at CSIS, tells The Verge. “But basically anything else I think is up for delays or cancellations.”

On a more superficial level, it seems likely that any planned trips to Russia or other pleasantries between NASA and Roscosmos will be delayed or canceled. Despite reports that NASA administrator Bill Nelson would be taking a trip to Russia to discuss ISS operations, NASA press secretary Jackie McGuinness confirmed to The Verge that there is no trip currently planned. “At the level of exchanges of dignitaries or attending conferences, I would guess that you’ll see a reduction,” David Burbach, a professor at the US Naval War College who teaches space security and international relations, tells The Verge.

Perhaps the most analogous situation to current events occurred back in 2014 when Russia invaded Crimea. At the time, NASA sent out a memo to employees telling them to suspend contact with Russian government representatives. Travel to Russia was suspended for NASA workers and Dmitry Rogozin, a deputy prime minister in 2014 who now leads Roscosmos, was sanctioned personally, preventing him from entering the United States.

NASA was in a much more precarious position in 2014. The space agency had just retired the Space Shuttle in 2011, and without the vehicle, NASA didn’t have a way to deliver people to space. So, for years, NASA relied on Russia’s Soyuz rocket to get its astronauts to and from the International Space Station. While NASA could take some actions, the agency couldn’t completely distance itself from Russia during the Crimea invasion as the agency needed Roscosmos in a fundamental way.

The situation is much different now. In 2020, SpaceX successfully launched two NASA astronauts to the ISS on the company’s Crew Dragon, demonstrating that it could deliver people to and from space for the agency. Now, NASA has the option to fly its astronauts solely on Crew Dragon flights if it wants. And that could give NASA a little more freedom to cut ties with Russia on certain projects. “NASA really doesn’t have a lot of reliance on Russia anymore for civil space programs,” says Young. “So I think that there’s a lot more wiggle room to be a bit more strict than there was in the past.”

One project that might be in a precarious position is a planned crew swap between NASA and Roscosmos, where the two organizations would allow personnel to fly on the other country’s passenger vehicles. While NASA has continued flying its astronauts on the Russian Soyuz rocket, Russian cosmonauts have not yet flown on SpaceX’s Crew Dragon. Lately, Roscosmos had begun warming to the idea, and the two organizations are in the midst of finalizing that arrangement, though nothing has been officially signed. In December, Rogozin announced that Russian cosmonaut Anna Kikina would fly on a SpaceX Crew Dragon in the fall of 2022 as part of the crew swap. NASA confirmed to The Verge that there are three cosmonauts currently in Houston training at NASA’s Johnson Space Center, and two NASA astronauts completed training in Russia earlier in February.

It’s possible that agreement could be in jeopardy in the future, but for now, it seems to still be moving forward. “Roscosmos continues fulfilling its international obligations to ensure ISS operation; work is also underway on the integrated crew flights agreement.” Oleg Bolashev, chief specialist of the Roscosmos press service, emailed to The Verge in a statement.

Roscosmos continues to rely on NASA to keep the ISS running, as NASA spends $3–4 billion on the project every year. “I think it is fair to say Russia stands to lose more than we do,” Harrison says. He argues that the ISS is the flagship of the Russian space program. “They don’t really have any other achievements to point to of that magnitude,” says Harrison. “So they would be losing a tremendous science platform but also a tremendous status symbol as a space superpower if they didn’t have ISS.”

The ISS isn’t going anywhere anytime soon, but the future of the station is still unresolved. In late December, the Biden administration announced its intention to extend ISS operations through 2030. Roscosmos has been mulling over a similar extension. However, Rogozin told The New York Times that such an extension could not happen until the sanctions on two Russian companies were removed. “In order to give us a technical capability to produce whatever is needed for this extension, these restrictions need to be lifted first,” Rogozin said. However, Rogozin also told CNN that “this is a family, where a divorce within a station is not possible.”

Outwardly, Rogozin is still showing his support for Roscosmos’ relationship with NASA amid current events while condemning US policy.

We really value our professional relationship with @NASA, but as а Russian and citizen of Russia, I am completely unhappy with the sometimes openly hostile US policy towards my country.

The NASA and Roscosmos relationship has faced more tests than ever as of late, even beyond the situation in Ukraine. When the Russian military intentionally destroyed one of the nation’s own satellites with a ground missile in December, the test created thousands of pieces of debris that posed an immediate threat to the International Space Station. The crew onboard — which included two cosmonauts — had to be woken up early and then sheltered in place as a precaution. Administrator Nelson condemned the test, and he later spoke with Rogozin, “expressing dismay” over the danger the astronauts faced. Rogozin indicated to The New York Times that he shared frustration over the test.

As it is, the ISS remains one of the few things keeping NASA and Roscosmos together. NASA is currently focused on its new flagship mission called Artemis, a massive new endeavor to send the first woman and the first person of color to the surface of the Moon. As part of that project, NASA developed the Artemis Accords, an international agreement between various nations that creates a set of standards for how to explore the Moon. Rogozin has been particularly critical of both Artemis and the Artemis Accords, comparing the agreement to “an invasion” in a now-deleted tweet. He also said that Russia plans to work with China on their lunar efforts instead.

Despite all this turmoil — both in space and on Earth — the ISS is still zooming along on its orbit, and the astronauts and cosmonauts on board are still working together as planned. In March, Russia plans to launch another crewed Soyuz flight to the ISS, though that mission will carry an all-cosmonaut crew. That isn’t likely to change anytime soon.

“I think it’s pretty unlikely we’ll see expansions or new developments with Russia,” says Burbach. “But I don’t think that the nuclear option with ISS — I don’t think we’re going to see that.”