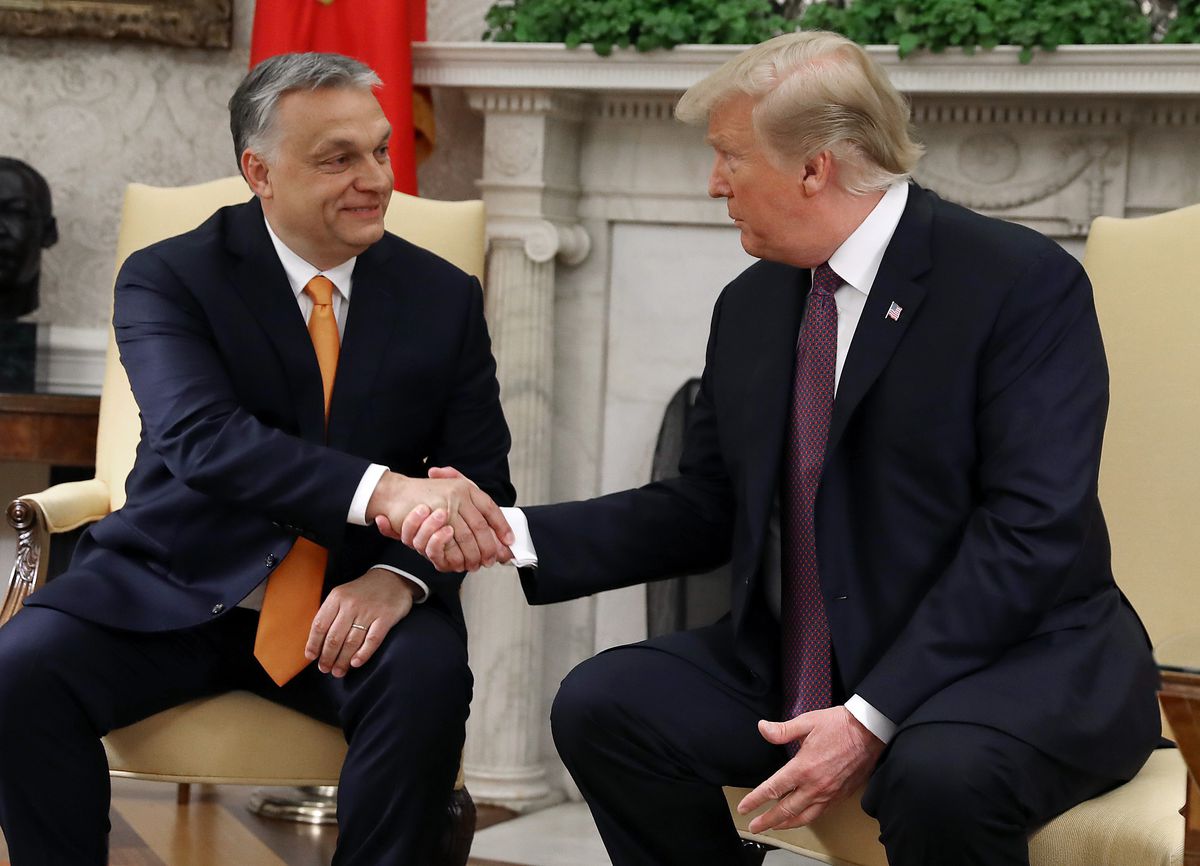 About two weeks ago, Hungarian Prime Minister Viktor Orbán gave a speech in which he declared “we do not want to become peoples of mixed-race.” On Thursday afternoon, he gave the opening speech at the Conservative Political Action Conference (CPAC) in Dallas, a bookend to former President Donald Trump’s closing address this weekend at the influential right-wing gathering.

That Orbán took the marquee spot at American conservatism’s most prominent jamboree despite his recent mask-off moment — one that led a longtime Orbán adviser to resign, calling his speech “worthy of Goebbels” — is a testament to his country’s place in the US right’s imagination. Under Orbán, Hungary has become for them something like what the Nordic countries are for some progressives: an idealized model of what they hope America could become. The most important difference is that the Nordic countries are firmly democratic, while Orbán’s Hungary very much is not.

Orbán was careful to reject charges of both racism and authoritarianism in his CPAC speech, mocking such accusations as “fake news” produced by “idiots.” Yet if you listened to his speech carefully, the dark heart of his project was plainly apparent: a conspiratorial belief that “globalists” were driving the West to the brink of cultural suicide, paired with an open acknowledgment that conservatives “cannot fight successfully by liberal means.” The mask was back on, but it was gossamer thin.

The purpose of the speech was simple enough: to tighten the bonds linking Orbánism with the Trumpism that dominates the American right. The Hungarian populist sees the potential in that connection. His closing lines called on conservatives across the Atlantic to “coordinate our troops” in the fight against liberalism, exhorting them to gear up to remove Joe Biden from office (“you have two years to get ready”). The stakes, in his telling, are the very future of our civilization.

“The West is at war with itself. We have seen what kind of future the globalist ruling class has to offer. But we have a different kind of future in mind,” Orbán told the crowd. “The globalists can all go to hell. I have come to Texas.”

The Hungarian prime minister’s outreach to the American right is longstanding, intentional, and very well-informed. He has met with prominent conservatives in academia and the media, even offering state-funded fellowships in Budapest, and is quite familiar with the language and tropes of the American right. His speech contained deft references to their ideas, like attacks on defunding the police and support for a flat income tax, that he occasionally sounded less like a foreign dignitary and more like a GOP candidate for office. He repeatedly pandered to the Texan audience, calling Hungary “the lone star state of Europe” and saying “we decided we don’t need more genders, we need more Rangers; less drag queens and more Chuck Norris.”

If Orbán has been courting the American right for years, his speech in Dallas was a marriage proposal — one that seems to have been accepted. The dangers of this ideological coupling should not be underestimated.

Typically, foreign leaders who travel to the United States try not to get involved in American partisan politics. Addressing CPAC, an avowedly conservative organization, certainly doesn’t fit the mold.

While Orbán did pretend to be diplomatic at the outset, saying “we respect the government of the United States,” he also noted that “we are not the favorites of American Democrats” — and that the feelings were very much mutual. In the speech, he practically positioned his government as the European branch of the GOP — saying that “we should unite our forces” to “take back the institutions in Washington and in Brussels.”

“You have midterm elections this year, then presidential and congressional elections in ’24. And we will have elections in the European parliament [the] same year,” he continued. “These two locations will define the two fronts in the battle being fought for Western civilization. Today, we hold neither of them. Yet we need both.”

These faraway elections are politically twinned, Orbán argued, because both represent a struggle between traditionalist conservatives and globalist progressives. The latter camp, in his telling, is prominently represented by George Soros — a Hungarian-American Holocaust survivor and philanthropist who has become a transatlantic conservative boogeyman.

“He has an army at his service: money, NGOs, universities, research institutions, and half the bureaucrats in Brussels. He uses this army to force his will on his opponents — like us, Hungarians,” the prime minister said.

Soros and his “army,” according to Orbán, pose an existential threat to the survival of the West. They are attempting to stamp out “Christian” values — which he at times called “Judeo-Christian values,” leaving out the dubious prefix when discussing the Jewish Soros — and recreating the conditions under which Nazis and Communists once rose to menace Europe.

“The horrors of Nazism and Communism happened because some Western states in continental Europe abandoned their Christian values. And today’s progressives are planning to do the same,” he said. “They want to give up on Western values and create a new world, a post-Western World. Who is going to stop them if we don’t?”

Setting aside the plain absurdity of Orban’s history here — fascist forces received significant support from some churches, including in Hungary, and drew on an anti-Semitic tradition that has its origins in centuries of Christian anti-Semitism — the reference to Christian values spoke to a deeper purpose for his visit.

It does something that Trump has been expert at doing: elevating the stakes of the struggle against liberals like Biden and Soros to an existential pitch.

So what is to be done, other than to win a handful of elections? Orbán suggested a few things, including building “a legal wall around our children to protect them from the gender ideology that targets them” and a literal wall to keep out migrants. But even more ominous was his suggestion that “we cannot fight successfully by liberal means, because our opponents use liberal institutions, concepts, and language to disguise their Marxist and hegemonic plans.”

This rejection of philosophical liberalism — of the very “institutions” and “concepts” that define politics in a liberal democracy — recall Orbán’s infamous 2014 description of his vision for Hungary as an “illiberal democracy.”

The term is a bit of a misnomer, as his regime has so thoroughly stacked the electoral deck in favor of his Fidesz party that it is no longer meaningfully described as a democracy either. And in the past eight years, the prime minister has recognized the nefarious implications of the phrase and moved away from it (preferring the term “Christian democracy”).

But it nonetheless captures the ruthless politics Orbán has practiced — including seizing ownership of the media, abusing asylum seekers, shuttering universities, limiting LGBTQ free speech rights, destroying the businesses of his political rivals — to secure his hold on power. All along the way, these steps have been justified by reference to the allegedly existential threat to Hungarian Christian identity: a no-holds-barred politics animated by warnings of imminent national extinction by enemies both internal and external.

The vision Orbán presented at CPAC, and the one that the audience cheered, is essentially the scaffolding for authoritarianism.

What was most striking about the Hungarian autocrat’s speech if you were just hearing him for the first time was how … American it was.

Listen to the rhetoric of any leading Republican or conservative nowadays, and you’re likely to hear pretty much identical apocalyptic language about progressives, migrants, and gender. It’s a staple of Trump rallies in particular — his 2019 speech alleging that Democrats “want to destroy you and they want to destroy our country as we know it” is a representative example — but it’s gone way beyond him.

Take Tucker Carlson — the right’s most influential pundit and, not coincidentally, Viktor Orbán’s biggest American booster. Carlson, like Orbán, has fully embraced the idea that migration is a plot to “replace” the native-born population with people who are fundamentally incapable of sustaining its traditions.

“No country can withstand what we’re going through right now and in our specific case, it turns out that a lot of the people coming are not ready to participate in a democracy,” as he put it in a July monologue. He went to blame, in part, “a George Soros-linked organization” for shepherding immigrants into the country — asking rhetorically, “why is some foreign-born billionaire allowed to change our country fundamentally?”

Soros is not changing America “fundamentally” in any way, let alone through mass migration. But Carlson, the highest-rated host on cable news, knows what his viewers crave.

When conservative intellectuals make an affirmative case for Hungarian politics, they typically cite some of Orbán’s policies, like his efforts to reduce migration rates and provide tax incentives for people to have more children. But the details of Hungarian family policy are not what has turned him into a leading attraction at CPAC; it’s the fact that his dire worldview matches the mood of the conservative base. They too see the left as an existential threat, and they’re excited to have a foreign leader who appears to have conquered it in his country.

Orbán’s victory came through anti-democratic means — a fact that his American fans, like the prime minister himself, will vehemently deny. And yet, there is no doubt that the specter of existential cultural struggle has impelled similar Republican attacks against democracy and small-l liberalism.

Trump lacks Orbán’s talent for manipulating the levers of policy to strengthen his hold on power; in this respect, Florida Governor Ron DeSantis is the closest American parallel. But Trump matches Orbán, even exceeds him, in understanding just how far you can go once you’ve convinced your followers that their nation’s very survival is at stake.

In his now-infamous January 6 speech, Trump told the crowd that they had to “fight” for America: “if you don’t fight like hell, you’re not going to have a country anymore.” When you’re at war, when the very existence of the country is at stake, you take whatever steps you need to defend yourself — even drastic ones.

This is why, increasingly, the conservative vision for Washington resembles Budapest-on-the-Potomac.