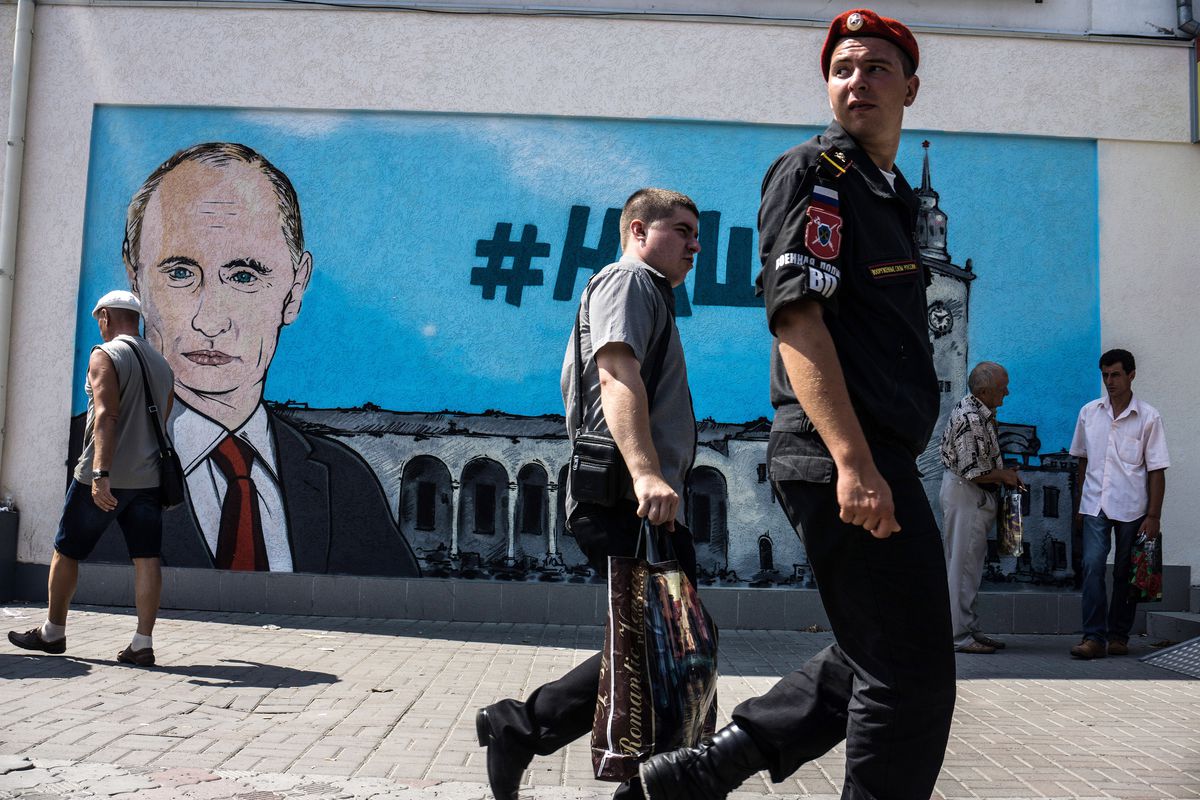 Few American presidents have spent as much time thinking about Ukraine as Joe Biden.

The Eastern European country is perhaps the only topic that gets more space than family or a presidential run in his 2017 memoir. Biden reflects on 2013 to 2014, when mass protests unseated the Ukrainian president and a Russian invasion led to the annexation of Crimea. Both tested the Obama administration. “The Ukrainian people had been on a thrilling and sometimes harrowing roller coaster for the previous year, and I felt like I had been on it with them,” he writes.

That crisis has striking similarities to the one unfolding today, especially Biden’s role as foreign-policy problem-solver. Russia has mobilized more than 100,000 soldiers and threatens an attack on neighboring Ukraine, a larger deployment of troops than during its 2014 offensive.

That year, Obama’s team badly misjudged the ferocity of Russian President Vladimir Putin, it was naive about resetting relations with Russia, and it didn’t anticipate the pernicious tactics Russia would pursue against Ukraine and, ultimately, the United States. Those mistakes from eight years ago are informing the White House’s response now.

Biden traveled to Ukraine six times as vice president. He called its leaders on a weekly basis to cajole them into strengthening their democracy and pushing back on Russia more forcefully. “What happens there will resonate well beyond Ukraine. It matters to all — not just in Europe, but around the world,” he said in a 2015 speech to security leaders in Munich.

Ukraine, a former Soviet republic headed by the pro-Russian Viktor Yanukovych, was pursuing a trade agreement with the European Union in 2013. But Russia pressured Ukraine to not sign it, which upset a public eager for new openings with Europe. Soon, 100,000 protesters gathered in Kyiv’s central square, the Maidan. US diplomats visited the demonstrations, in symbolic gestures that further agitated Putin.

Biden worked the phones with Ukrainian leaders as security forces, with Russian backing, arrested hundreds of protesters, according to his memoir. In February 2014, snipers and other authorities killed 88 protesters in what came to be called the Revolution of Dignity. Yanukovych fled the country days later, and protesters took over much of the capital.

Then came the war. “We were obviously surprised,” said a senior Obama defense official. In March, Putin deployed special operations troops and irregular forces — soldiers without Russian insignias that gave Putin plausible deniability, who came to be known as “little green men” — to take Crimea in Ukraine’s south. Crimea remains under Russian control today. Historians noted that the annexation was the European first land grab since Hitler in 1938, and showed the lack of guardrails keeping Europe’s security in check.

One Obama adviser wondered if Putin “recognized that President Obama was reluctant to engage in military conflicts,” and which meant that Russia could get away with it.

Russia went on to back separatists in the Donbas region in Ukraine’s east, in an ongoing conflict where 14,000 people have died since 2014. A Russian brigade shot down a Malaysian plane over Ukraine and killed 298 civilians.

The Obama team was slow to rebuke Putin and sloppy in coordinating with European allies. “The 2014 crisis was one that sharpened a lot of minds,” said Max Bergmann, who was a State Department official at the time. “What I think you see now is the effort to get the ducks in a row right away, to send very clear messaging about what the cost would be to Russia.”

In the first month of the Obama presidency, Vice President Biden said the administration would work to reset relations with Russia. Initially, the US pushed for Russia to join the World Trade Organization. Antony Blinken, who advised Biden for almost two decades, suggested a new beginning. “We’re not trying to build our own sphere of influence,” he said in 2009 while visiting Ukraine with Biden. “The partnerships aren’t being built against anyone. They’re being built for the purpose of addressing common challenges that Russia also faces.”

The annexation of Crimea put an end to this.

Blinken, about one year out of the Obama administration, said they had “misjudged” Putin, whom he ultimately concluded was a kleptocrat and rogue. By the time he invaded Crimea, “we really were in the zero-sum world where, from Moscow’s perspective, Russia’s strength was our weakness, and our gain was their loss,” said Blinken, who now serves as Biden’s secretary of state.

The Biden team learned that Putin will advance his goals with “asymmetric” tactics, or military and non-military approaches that operate within a gray zone, to trip up the United States. In 2014 and onward, Russia leaked a phone call to embarrass US diplomats, spread fake news, and sowed disinformation, which culminated in unprecedented attacks on the 2016 election in the US. It’s led Biden to grapple with “How to Stand Up to the Kremlin,” as was the title of a 2018 essay he co-authored for Foreign Affairs. He argued that the US must “impose meaningful costs on Russia when they discover evidence of its misdeeds.” He also said that, despite Russia’s belligerent tactics, “Washington needs to keep talking to Moscow,” to avoid unintended escalations of conflict.

As president, Biden has again taken on the role of problem-solver. He spent two hours meeting with Putin in a video call in December as Russia had mobilized troops to its border with Ukraine. “Biden is personally very active on this stuff,” said Ian Bremmer of the Eurasia Group. “Biden runs those meetings. He understands the details.”

It’s tough to corral the 27 member states of the European Union and the 29 other members of NATO. In 2014, the US and its allies in Europe moved slowly in response to Russia’s aggression. That spring the US kicked Russia out of the G8 grouping of countries, worked with the EU to sanction Russian leaders, and began multilateral negotiations over the crisis. But it was not enough to deter Russia.

At the time, Julie Smith, a former adviser to Biden, was taking a break from government. Speaking at a panel in March 2014, she said the US and Europe deserved “pretty low marks, close to a fail.” The Obama administration’s attention had been trained on Asia and the Middle East, leaving behind Russia and Eastern Europe. “All in all,” she said, “a really rough start in part because of the blind eye that we had on this corner of the world for so long.”

Smith is now the US ambassador to NATO, and has focused on a united front in Europe. “I can’t remember a situation where we have seen such dogged diplomacy, day by day, almost hour by hour, to try to prevent a war in Ukraine. It really is all hands on deck,” said Charles Kupchan, a Council on Foreign Relations fellow who worked in the Obama White House from 2014 to 2017.

The Biden team internalized the lesson that allies count. Blinken in 2016 acknowledged that sanctions against Russia were more effective when “we rallied others” to participate.

Several former ambassadors to Europe told me that they were impressed by how quickly the Biden administration has employed old-fashioned diplomacy. “They have clearly inspired a purposeful, thorough, robust engagement with allies around this crisis that has already paid dividends,” said Dan Baer, an ambassador to the Organization for Security and Co-operation in Europe from 2013 to 2017, who is at the Carnegie Endowment for International Peace.

“They are leaning into diplomacy big time, and they’re confronting the prospect that diplomacy might fail,” added Kupchan.

Biden cares about Ukrainian democracy and is cognizant of the endemic corruption that makes good governance difficult for the country. Nevertheless, he has unequivocally advocated for what the White House euphemistically calls “lethal aid” — that is, free weapons.

This contrasts with debates within the Obama administration. Obama was against quickly arming the Ukrainians for fear of agitating Russia, and perhaps because the Ukrainian army was undisciplined. (And once so-called defensive weapons were approved for Ukraine, the transfers were slow.)

Biden was in the camp urging Obama to increase weapons transfers. Now, many Obama-era officials who took the hawkish position in advocating for sending weapons to Ukraine are in positions of power. As Biden explained in 2015, “Believe me, helping Ukraine in its defense and deterrence against Russian aggression is critical, is critical to checking further aggression down the road.” He later described President Donald Trump’s shipment of advanced missiles to Ukraine as “a wise decision.” Biden pledged to deliver weapons to Ukraine on the 2020 campaign trail, long before any new flareups.

So it should be no surprise that the Biden administration has quickly sent to Ukraine $200 million of weapons and more are likely on the way. Ukraine, for its part, is the fourth-largest recipient of US military funding for weapons. Thousands of American soldiers are also headed to NATO partners in Europe.

Ian Kelly, who served as ambassador to Georgia from 2015 to 2018, speculates that Putin thought that the “Obama holdovers” on President Biden’s team would be reluctant to move like last time. “Obama didn’t want to sell lethal weapons, Obama didn’t want to escalate, Obama didn’t really react with much in 2014,” said Kelly. But Putin “miscalculated,” he explained, and the Biden team are “firm trans-atlanticists who believe in NATO.”

Like the Obama administration, Biden’s inner circle hadn’t prioritized Europe on paper. The interim national security strategy from last year, a document that guides the Biden administration’s thinking, did warn of “strategic challenges” from a “destabilizing Russia.” But the Biden White House indicated that they wanted to prioritize above all China and climate change, addressing the pandemic and rebuilding the economy.

Now, Russia is taking much of the Biden team’s attention, and the new national security strategy that was due out in early 2022 has been delayed.