What the world got right during the Covid-19 pandemic 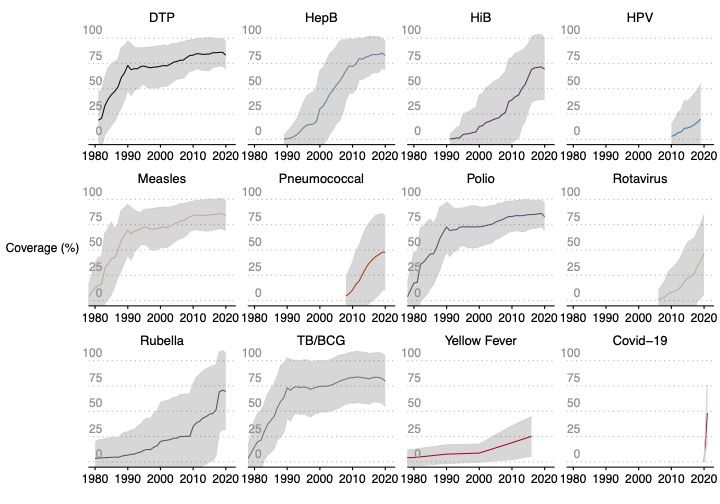 Two years ago this month, the World Health Organization (WHO) gave a name to the mysterious new disease caused by a novel coronavirus then about to rip through the world: Covid-19.

One year ago, the rollout of the vaccines created to fight Covid-19 was well on its way.

For all the frustrations over vaccine inequity and hesitancy, that one-year gap between the pandemic’s start and the rollout of the vaccines is nothing short of a historic success.

A new report underscores just how miraculous it was. The study, from the Center for Global Development (CGD), found that the Covid-19 vaccination campaign “has been the most rapid in history,” outpacing landmark achievements in vaccination for diseases like smallpox, measles, and polio.

The feat is even more impressive because while most global vaccination campaigns to date have targeted children specifically, Covid-19 vaccination efforts are aimed at the entire global population. Charles Kenny, a senior fellow at CGD and one of the co-authors of the report, told Vox that it was unprecedented for a global vaccine campaign to focus on “every adult in a single year for the great majority of countries.”

Still, there are caveats. The biggest one is that the speed of the Covid-19 vaccine rollout primarily applies to high- and middle-income countries. Our World in Data reports that while 61.9 percent of the globe has received at least one dose of a Covid-19 vaccine, only 10.6 percent of people in low-income countries have received at least one dose.

As the CGD report shows, this rate is actually slower than campaigns to vaccinate for diseases like tuberculosis and diphtheria in low-income countries. In other words, we know we can vaccinate at a faster rate in those areas — we just haven’t been able to do it with Covid-19.

Josh Michaud, associate director for Global Health Policy at the Kaiser Family Foundation, said in an email, “Our benchmark for success shouldn’t necessarily be ‘faster than what we did decades ago.’ Rather it should be, ‘what’s the best we can do right now with existing technology and know-how?’”

Kenny doesn’t disagree, and argues that the report is a sign of optimism with an asterisk. “’Did we do as well as we could?’ is a separate question. I think no, not nearly as well as we should have,” he said. “It is still sort of interesting and important to recognize that we are in a better place than we … have been historically with vaccine rollouts.”

That progress is indeed encouraging. While the Covid-19 vaccine rollout highlights how inequities continue to leave the most marginalized populations of the world underprotected, the campaign’s broader success is promising for both the current pandemic and for pandemics that may arise in the years and decades to come. Humanity now knows how fast it can get a global vaccination program up and running, and that sets a standard for the future.

Each week, we explore unique solutions to some of the world’s biggest problems.

One lesson we have absorbed from Covid-19 is that when it comes to infectious disease, speed — or the lack of it — kills.

The longer a pathogen is able to spread through a population without being checked by a vaccine, the more people it can infect. The CGD study reports that prior to Covid-19, aside from smallpox, the average period between identifying the disease-causing pathogen behind a disease (such as poliovirus for polio) and development of a vaccine was 48 years. After the pathogen had been identified, the average time between vaccine development and vaccine rollout sufficient to reach 20 percent global coverage was 36 years; for 40 percent coverage, 42 years; and for 75 percent coverage, 53 years.

For the Covid-19 vaccines, however, the period between identifying the disease-causing pathogen and developing a vaccine was less than a year. And the time between vaccine development and 20 percent global coverage was just under eight months, while getting to 40 percent coverage took another three months.

The CGD report also put the Covid-19 vaccine development and rollout in the context of three major global vaccine initiatives: smallpox, routine childhood vaccinations (against diseases like pertussis and tetanus), and annual influenza.

There were lessons to be learned from each of them. With smallpox, the improved technology and vaccination strategies (particularly the use of disease surveillance and ring vaccination — vaccinating those most likely to be infected) were crucial to its gradual eradication. Routine childhood vaccination against diseases like polio proved the necessity of having good financing and a global infrastructure for universal immunization. Global influenza vaccination efforts revealed the importance of building capacity for recurring vaccination.

Those and other lessons paved the way for the rapid development and distribution of Covid-19 vaccines.

“It helped that much of the technology had already been primed and ready to go based upon a foundation of existing research, including the viral vector and mRNA vaccine platforms,” Michaud said.

In addition, high- and middle-income countries alike had much more of the health financing and infrastructure today to develop, manufacture, acquire, and get shots into the arms of their populations. Before Covid-19, the annual influenza shot was the world’s largest regular vaccination program. Yet as of 2013, it reached only about 7 percent of the global population, with a majority of coverage in richer countries, according to the CGD report.

That doesn’t mean there weren’t hiccups in the distribution of Covid-19 vaccines.

The campaign against smallpox is worth zooming into for one aspect in particular that has been in short supply during the Covid-19 pandemic: global cooperation.

The WHO, then as now, attempted to coordinate a joint global response. And crucially, despite the tensions of the Cold War, the two superpowers, the United States and the Soviet Union, engaged in “vaccine diplomacy” that would prove crucial to the global eradication of smallpox. This collaboration contributed to the vaccination of “significant proportions of populations even in some of the world’s poorest countries within 18 months,” the CGD study states.

That kind of global cooperation, especially between the US and China, hasn’t been in evidence during this pandemic. The US and China certainly ought to have cooperated on vaccinating the world against Covid-19, as they had collaborated previously on crises like the 2014 West African Ebola epidemic.

However, relations between the two have only deteriorated during the Covid-19 pandemic. On top of this, countries with strong vaccine manufacturing capacity — including the US — engaged in vaccine nationalism, prioritizing their own populations over the global community, and failed to properly fund and support Covax, the primary vehicle for ensuring vaccine equity for both high-income and low-income countries.

In the end, as Kenny told Vox, “no government did particularly well” when it came to collaborating to make sure the world was equitably vaccinated — “to everybody’s loss.”

This leaves us with dueling assessments of the global response to Covid-19 — astonishingly fast in the context of human history, but still wanting in the face of what we could have done. That we now know what we’re capable of, and what we need to work on when the next one rolls around, is one indisputable takeaway from humanity’s response to this pandemic.

A version of this story was initially published in the Future Perfect newsletter. Sign up here to subscribe!