What to do if you run out of dog poop bags 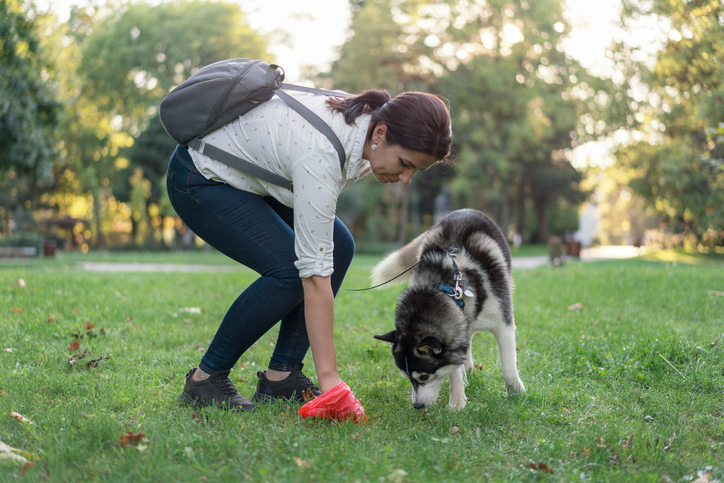 You’re on a walk and your dog finally picks a spot to do their business. You reach for a bag, except there are none left. You check the dispenser again, then check your pockets, nothing. Panic crashes over you like a wave as you realize you are stranded without a poop bag.

Your animal instinct is to flee the scene of the crime and hope no one noticed. Maybe you pretend you didn’t even see your dog in a squatting position, even though they maintained eye contact with you the whole time.

But before you get too carried away, we’re here to tell you that you do have options. Any dog owner knows the deep shame and fear of retribution that comes from leaving a poop on a neighbor’s front lawn, and will go to great lengths to avoid this happening. Thankfully, dog owners on Reddit have lots of advice for what to do if you run out of poop bags.

Separation anxiety in dogs can be difficult. Here’s how you can help.

Of course the obvious solution is to try and prevent it from happening in the first place. Use a bag dispenser, stash extras in your coat pockets, tie some around the leash, some harnesses even come with pockets to store bags. But this is what to do when shit inevitably happens.

Work with what you have

One option is to use your surroundings to fashion an instrument for picking up the poop so it can be transported to the nearest possible garbage.

Several people suggest looking around for littered masks, newspapers, cups, or leaves. Redditor u/Mbwapuppy once saw a poor soul sacrifice his coffee by dumping it out so he could scoop up the poop. “On the rare occasion that I run out, I root through other people’s garbage cans for plastic bags like an animal,” said u/Jev_Ole. “Gross and invasive, but better than leaving dog shit on their front lawn!” That is indeed gross and invasive, but the commitment is admirable.

Dog owners are nothing if not resourceful, which is why another Redditor resorted to using their sock. “I scooped up the poop with my socks and sprinted out of there with a puppy in one arm and a sock full of shit in the other,” said u/jigglywigglywoobly.

No bag? No problem (as long as you’re wearing socks.)
Credit: Getty Images

Go and get a bag

The other option is to simply go and get a bag. This might be going to the nearest store to ask for a grocery bag, going back home to grab one, or asking someone on the street. If you’re lucky and happen to be with someone else, one of you can stay behind and give an official statement to annoyed neighbors.

But if you are alone and decide to use this method, leaving the poop scene must be done very tactfully. Otherwise, you might be accused of a poop-and-run. First and foremost you have to act the part. This must be the poo-formance of a lifetime, in order to convey to anyone watching that this was a silly mistake, and it will be rectified.

“[I make] a theatrical show of searching all my pockets and looking exasperated… then make a mental point of the pile and go back later and pick it up,” said Redditor u/cranberry94. In a reply to this comment, u/morehappysappy, said, “I even talk to my dog so my neighbors won’t hate me. ‘Oh no pup they are out of bags at the poop station. We will try one more or come back later!'”

Once you’ve acted your heart out, several users suggested leaving something behind as collateral, or marking the poop with a stick or a pile of leaves; a cairn, if you will, to keeping neighborhoods clean.

It’s not too late to socialize your pandemic puppy

Move it, but don’t pick it up

The secret third option is only really doable if you are on some kind of nature trail, but this way you don’t have to deal with carrying the poop around after.

One way to do this is the “stick and flick” method as described by u/SureEngineer1. “Flick the poop out of the path so no one can step on it,” they said. “Saves on landfill too!” This method, which has also been referred to as “poo golf” or “poo kabob” should only be used in a rural area where one is confident the poop won’t be flicked into someone else’s way.

Another way is to bury the poop by digging a hole with a stick, rock, or even a handy little trowel, although if you remembered to bring a trowel, you probably don’t need to read this.